Skip to content
Frigates Blanche and Pique duel in darkness – 1795

Duel in the Dark: Frigates Blanche and Pique 1795

Though major fleet actions such as Camperdown, The Nile and Trafalgar seem to most as  emblematic of the Great Age of Fighting Sail, such engagements were, by their very nature, few in number. Far more common – and in many cases even more savage – were the “single ship actions” in which one warship met another on the open sea, when each captain and his crew were determined to hazard all, and when retreat was seldom, if ever, an option. The most dramatic of all such actions were those which matched one frigate against another – these vessels not only being heavily armed for their size and highly manoeuvrable, but commanded by energetic young captains hungry for promotion and prize money. 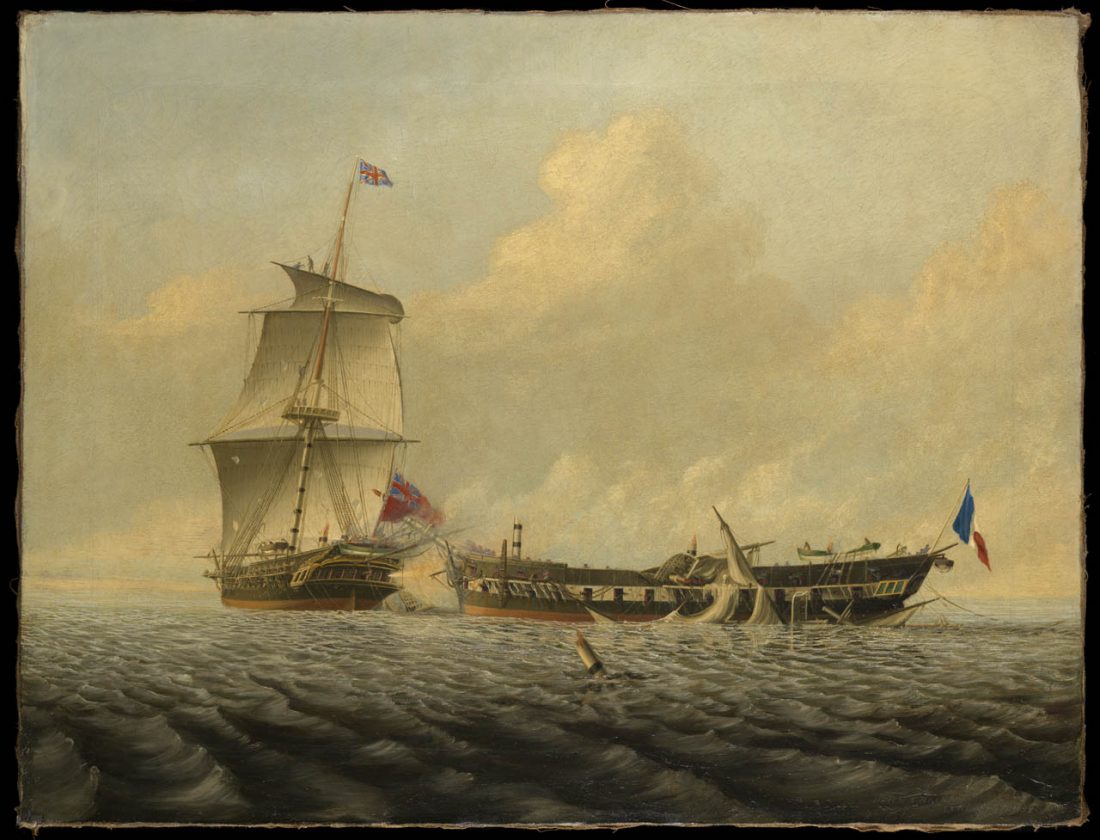 End of the Blanche vs. Pique action – both ships in states not unusual after such combats
Painting by John Thomas Baines with Acknowledgement to National Maritime Museum, Greeenwich

Weight of armament alone was not necessarily a deciding factor. Far more important were a captain’s ability to manoeuvre his ship into a position from which he could inflict the most serious damage on his adversary. This meant “raking” – shooting down the axis of the enemy vessel, either from ahead or, even more lethally, from astern. Sailing vessels had no substantial transverse bulkheads and cannon-fire of this type could rip along an entire gun-deck, scything down all in its path. Allied to this factor was speed and accuracy in gunnery, not just as regards opening broadsides but in ability to maintain steady fire, if necessary for hours on end.

Should each of the contestants be unable to inflict a knock-out blow by gunnery alone – which was often the case when damage to masts, spars and sails impaired ability to manoeuvre – one last tactic remained. This was to board, to draw close enough to the enemy to launch much of the ship’s company across and to attempt to subdue the other crew with close-range small-arms fire and in furious hand-to-hand fighting. In such a desperate case the advantage lay with the crew that had trained and trained and trained again and which had been welded into a single proud unit with high morale. And the single most important factor of all – a bloody-minded determination to prevail.

All these features were present in one of the most furious single-ship actions of the Revolutionary and Napoleonic Wars. This occurred on the night of 4th-5th January 1795 when the Royal Navy frigate HMS Blanche engaged a French counterpart, the Pique, off Guadeloupe in the West Indies. The  Blanche,  a  32-gun, 12-pounder frigate commanded by Captain Robert Faulknor had been cruising  on the West Indian station for several months – exports from French “sugar islands” such as Guadeloupe were critical for  the French war-economy and the Royal Navy was committed to doing everything possible to disrupt such trade.  Faulknor was aggressive and on the penultimate day of 1794 his crew managed to “cut out” a French schooner from under the guns of a small fort  on the island of small island of Desirade , just east of Guadeloupe. Such “cutting out” was essentially a commando operation, a surprise attack with ship’s boats aimed at hijacking the enemy vessel. Such attacks demanded high levels of skill, confidence and morale and Blanche’s success on December 30thproved that there was no shortcoming in these qualities. 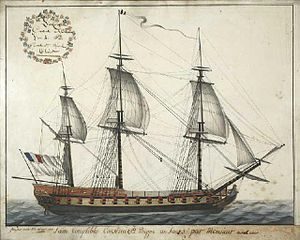 Faulknor now took Blanche to stand off the harbour of Pointe-a-Pitre, Guadeloupe, where she was joined by another frigate, HMS Quebec.  Within Pointe-a-Pitre lay a French frigate, the Pique, commanded by a Captain Conseil. He resisted the urge to come out while two British frigates waited for him offshore and he remained under the protection of the harbour’s shore batteries. Only after the Quebec departed on 2nd January did he emerge, but for the next two days he cruised back and forth  under the shelter of the shore guns until he could be sure that the Quebec was not lurking close by.

The Blanche was still on station however, and not inactive. At midday on the 4th she captured an American schooner bringing a cargo of wine and brandy  from Bordeaux – a valuable prize that Faulknor sent away with a prize crew. Still concerned that the Quebec might be nearby, Conseil made no move to recapture the prize. By midnight however, when the Quebec had not reappeared, Conseil finally decided to take his ship out to engage the Blanche. The night was a bright one but it is unclear why he decided to trigger what must be an engagement in semi-darkness.

As she advanced the Pique lay to windward of the Blanche –the most advantageous  situation as regards freedom of manoeuvre.  They passed on opposite tacks and each fired an ineffective broadside. The Blanche then went about and was now sailing parallel to the Pique and gradually overhauling her. Conseil let her come up till she was within musket-shot of his starboard quarter, then threw his helm his helm over, with the intention of crossing Blanche’s bows and raking her  as he did – a measure which, if successful, might have decided the action. Faulknor recognised the danger and the Blanche bore away also. This brought both vessels before the wind, at close range, broadside to broadside. 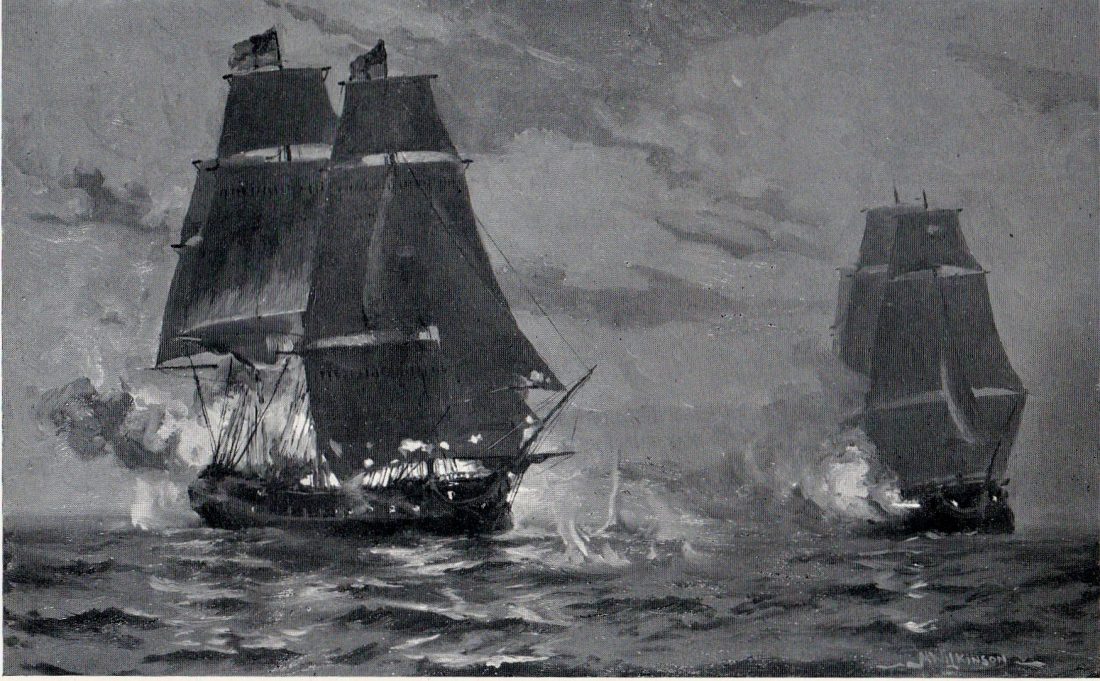 The artillery duel now began in earnest and for the next  hour and a quarter they thundered broadsides at each other, to no obvious detriment of either.  The Blanchewas however the faster sailer of the two and she slowly drew ahead. By 0230 she had passed the Pique and it was now Faulknor’s opportunity to rake.  The helm was thrown across to lay the Blanche broadside across the Pique’s advancing bows.  The damage that Blanche had sustained in the gunnery duel had perhaps been underestimated and as the helm answered the strain on masts and rigging proved too much. The main and mizzen both fell, the only stroke of luck being that they collapsed over the starboard side so that the guns to port still bore on the Pique’s bows. With range now point-blank, Blanche now poured fire into an enemy which could bring no fire to bear in return.

The next – and most remarkable phase of the action now commenced. The injured Blanche might have drifted free had the Pique’sbowsprit not run over her port quarter. It tangled in the wreckage there and both ships were now locked together.  The French attempted to board, but made the cardinal mistake in such circumstances, that of not devoting sufficient numbers to the assault. As they were driven back by the Blanche’s crew Faulknor realised that boarding now might represent his own best option. Making a virtue of necessity, and intent on holding the vessels locked together, Faulknor ordered that the Pique’s bowsprit to be lashed to the quarter-deck capstan. While this was happening he fell dead with a shot through the heart, command now devolving to his deputy, a  Lieutenant Watkins.

A few of the Blanche’s 12- pounders on the main deck could still be trained upon the Pique’s bows but most of the firing was now confined to  the small-arms men aloft and on deck, and to carronades, and swivels on the two ships’ forecastles. Pique was now taking serious punishment and at 0300 her fore and mizzen-mast went overboard. The force involved broke the lashings holding the ships together so that  Pique immediately dropped astern, with Blanche dead ahead. 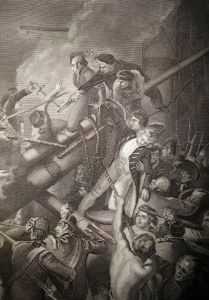 Lieutenant Watkins now ordered the measure that would break the deadlock. He  ordered one of the 12-pounder main deck guns to be run aft to where the carpenter and his crew were  trying to cut two ports in the stern through which it could fire. (The coolness of these men going about their business in the heat of the action borders on the unbelievable). The beams across the transom were however rock-hard and all efforts to cut them were defeated. The necessary ports were therefore provided by the simple method of firing the 12-pounder into the stern frames. The wood took fire, as had been expected, but men had been standing by with buckets of water to quench it. Another 12-pounder was manhandled aft and these two weapons now brought a devastating  fire to bear through the improvised ports  on to the Pique. The result was that her remaining mast was brought down, falling aft so as to put out of action the quarter-deck guns. These had been  run inboard and pointed forward so as to be the only heavy weapons that could be brought to bear on the Blanche. 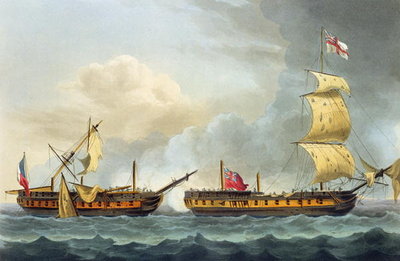 The French was now defenceless, except for their small arms but they still resisted. Only at 0515 – after five hours of ferocious action, and by which time Captain Conseil and many of his officers were dead, did she strike her colours. Both ships were floating wrecks – their boats were so badly damaged that the young Lieutenant David Milne who crossed to the Pique to take possession had to do so along the cable still linking the vessels.

Looking at this action from over two centuries later, one is struck by the sheer horror of the duration of the close-quarters fighting. When portrayed in a movie such an action is depicted in five or ten minutes of screen time, if in a book then at outside in a dozen pages. The fact that men – on both sides – endured and remained defiant for over five hours is a commentary on the sheer bloody-mindedness accepted as routine in the navies of the era. 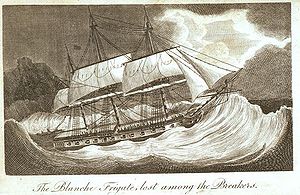 A sad end – the wreck of HMS Blanche

And as for both ships’ subsequent careers? Like all wooden ships of the time they were suited to fast and comprehensive repair. Blanche continued to serve in the Royal Navy until she was wrecked off the Dutch coast in 1799. Pique was taken into British service under the command of David Milne (1763-1845), who had boarded her to take the surrender. Her luck ran out in 1798 when she was wrecked in an action off the French coast. The loss did Milne’s career no harm – he was to be second in command to Lord Exmouth (Edward Pellew) at the bombardment of Algiers in 1816 and he was to end as a Vice-Admiral. His naval career spanned 60 years, from the great Age of Fighting Sail to the early years of the new Age of Steam.

Start the 8-volume New Dawlish Chronicles series of novels with the earliest chronologically: