The loss by fire of the SS City of Montreal 1887

The history of maritime passenger-transportation in the mid-nineteenth century is, in great part, a depressing catalogue of disasters. Many involved large loss of life and, if not wholly preventable, could have involved far lower death-tolls had elementary precautions been observed. It’s therefore all the more heartening to read of the loss in the open sea of a major ship in which the vast majority of passengers and crew survived.

Built in Glasgow in 1872, the SS City of Montreal, of the respected Inman Line, was a 4500-ton, 419-foot steamer that also carried a sailing rig, as was common at the time. Given her size it is surprising that her engine was rated as low as 600 horsepower. She was designed to accommodate passengers as well as cargo and she appears to have had an uneventful career on Trans-Atlantic service until 1887. She was not a fashionable  nor luxurious ship and her passengers were classed as “intermediate” (probably equivalent to second-class) or “steerage”, the latter being allocated very basic accommodation indeed. Her captain, F.S. Land, had previously commanded a trans-Atlantic liner, the City of Brussels, which had been sunk in collision in a fog off Liverpool some years before. 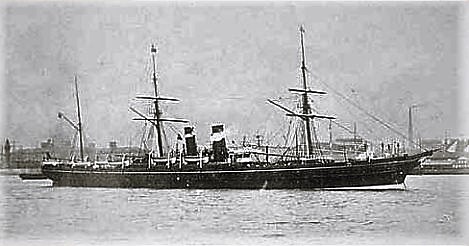 Disaster struck on August 10th 1887 when the vessel was some 400 miles east of Newfoundland on a passage from New York to Liverpool with 133 passengers, mostly in steerage, and a crew of 94. She was also carrying 8000 bales of raw cotton, a cargo that was apparently susceptible to spontaneous combustion. One account of the disaster mentions that no less than seventy-two vessels carrying similar cargoes had caught fire in the previous five months – one assumes that in most cases the fires had been got under control. That stronger preventive measures had not been put in place was, unfortunately, symptomatic of the attitude to safety in that era.

In the evening of August 10th cotton was found burning at the lowest level of the City of Montreal’s aft cargo-hold. Hoses were rigged to flood the compartment with water but in the coming hours the flames gained, moving up to the decks above. The majority of the passengers had been settled for the night but as smoke penetrated the cabins they came on deck. One can well imagine their terror. Some progress in fighting the blaze seemed to have been made during the night and Captain Land turned back for St. John’s, Newfoundland, the nearest port. He also ordered boats to be prepared for launching and to be stocked with provisions, but held off doing so as a high sea was now running and many of the crew, who would man the boats, were involved in fighting the blaze. Hopes of survival proved illusory however as fire burst through the after hatch and engulfed the deck.

At dawn on August 11th the decision was taken to abandon ship and the passengers were mustered. It is an indication that by 1887, in contrast to disasters in earlier years, some account had been taken of safety and that passengers and crew were equipped with life preservers. An eyewitness, a Rev. J.M. Donaldson from Adelaide, Australia, described the scene: “A picture of human misery and almost helpless despair was presented, such as words cannot adequately describe.  Mothers clasped to their bosom, with a fervency proportioned to the danger, their helpless children, husbands and wives embraced each other for what they felt in probability was the last time.” 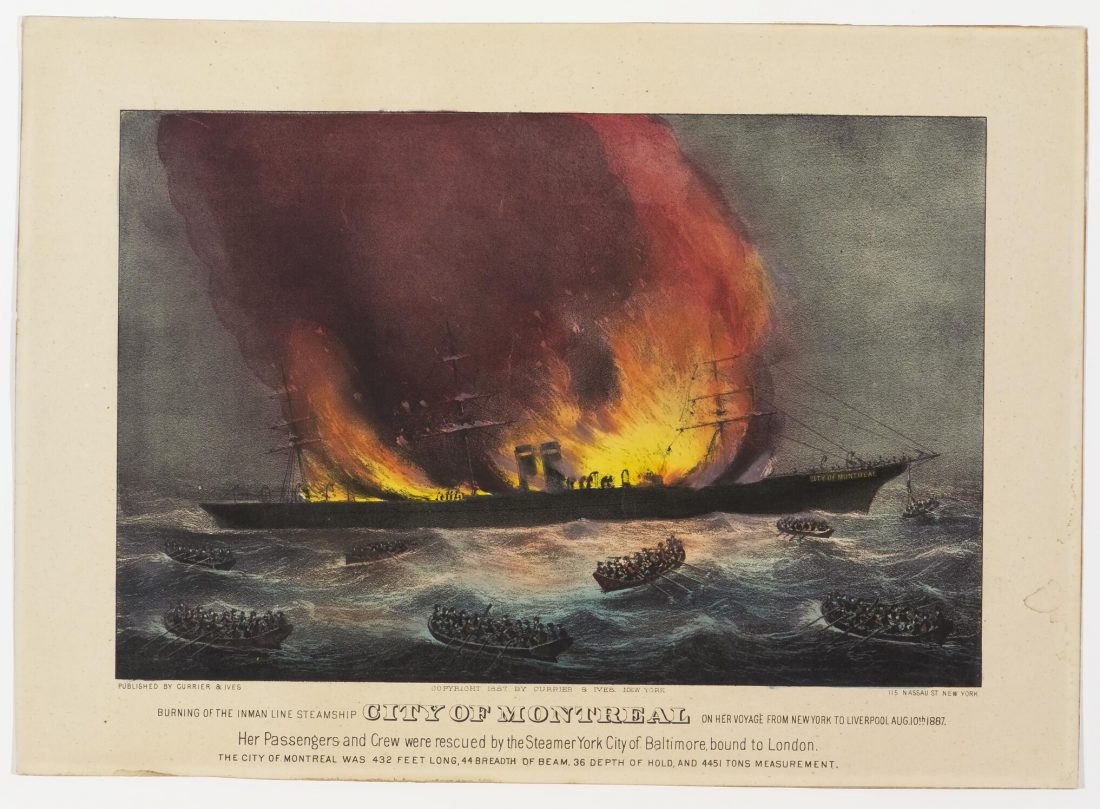 Contemporary print of the disaster by Currier and Ives

The ship carried four full-sized life boats and four smaller craft. Unlike the situation on the Titanic a quarter-century later, there was sufficient room in the boats to accommodate everybody on board – luckily none of the boats had been damaged in the fire. Despite the high sea the boats were launched successfully and passengers were transferred into them without loss. The Rev. Donaldson noted that “there was no panic, and no attempt was made to evade the rule of ‘women and children first’”. Several passengers and crew were however isolated on the after-part of the ship. Three boats returned and took them off. The captain and his officers had behaved well, both in fighting the fire and in the evacuation, as was recorded in a later testimonial by the passengers. Captain Land himself reported that “The heat and smoke affected my eyes, those of the chief officer and, in fact, those of all who were trying to put out the fire, rendering us all partially blind for some hours. The chief officer was led, totally blind and in great pain, over the side into the ship’s boat and did not get his eye-sight for two days after.” 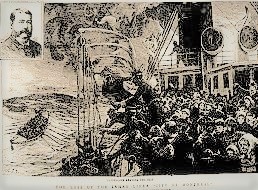 As the last boat was due to leave, a barque under full sail was seen bearing down on the burning ship. This proved to be the German Trabant. By the time she arrived the individual boats were widely dispersed and the search initiated for them was continued through the hours of darkness. Further help arrived in the form of the steamer York City, en route from Baltimore to London. Seven of the eight boats were recovered after as much as twelve hours in the water. Nobody was lost on any of these boats, despite having endured long buffeting. No trace was found of the last boat, which had seven passengers and six crew on board. The Rev. Donaldson recorded with righteously grim satisfaction that “the persons in charge of this boat, mostly men belonging to the ship, were guilty of gross selfishness, cowardice and inhumanity, going off in a boat half-full, whilst men whom they had seen were left to perish on the burning ship.” 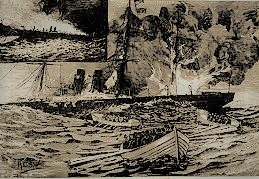 Boats escaping into the night from the burning City of Montreal

The survivors were all gathered on the York City and “her manly, kind-hearted Captain Benn.” With the Trabant, she searched fruitlessly for the missing boat but finally abandoned the effort leaving the abandoned City of Montreal burning, a derelict that was to be seen by another steamer some time later, but which subsequently disappeared, presumed sunk. The York City carried the survivors to Queenstown (now Cobh) in Southern Ireland, from where they were transported onward to Liverpool. The loss of life could have been far higher and passengers and crew had a very lucky escape.

The last word on the event was had by the Scots poet, William McGonagall, who could be relied on at the time to provide verses recording every major national event, but most especially disasters. He was to draw a moral from the Montreal’s loss:

So good people I warn ye all to be advised by me,

To remember and be prepared to meet God where’er ye may be;

For death claims his victims, both on sea and shore,

Therefore be prepared for that happy land where all troubles are o’er.