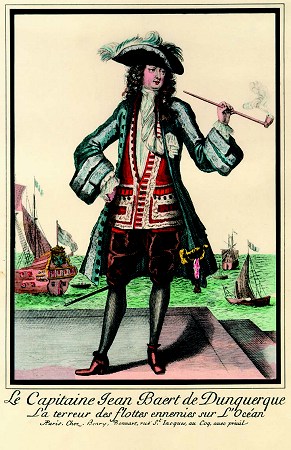 The French Navy’s record through the centuries never achieved the string of memorable victories won by Britain’s Royal Navy – though one French triumph, that of the Virginia Capes in 1781, was decisive in assuring American Independence. One French naval hero was however to achieve a status in his countrymen’s eyes comparable to Nelson in British ones. This was Jean Bart (1650 – 1702), a man whose career was so dramatic, and whose character was so outlandish, that only the most daring of authors would dare create a similar figure in fiction.

The name Dunkirk evokes today images of the almost miraculous evacuation of British and French forces in 1940 from the harbour and nearby beaches of this port on the French side of the English Channel. It played an equally important role in the late seventeenth century, when Britain, France and the Netherlands were locked in an almost continuous series of wars, as it represented the most northerly French naval base. As such it provided a fortified refuge and source of supply not only for formal naval forces but also for privateers. Its possession was vital for supporting French efforts to control the Channel and the North Sea and for harrying British and Dutch maritime commerce. 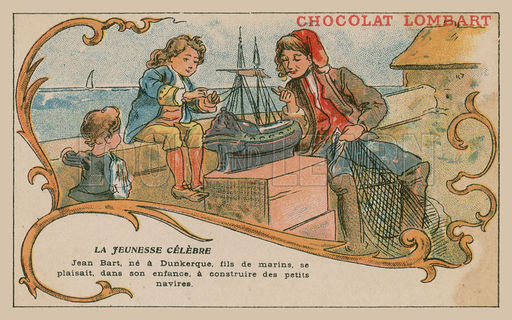 It was here that Jean Bart was born, in 1650, to a seafaring family. It may not have been French – there is some evidence that his original name was Jan Baert, indicating a Flemish origin, and that he spoke both languages. (Even today the French/Flemish linguistic boundary lies around a dozen miles north-east of Dunkirk). Details appear scarce but he seems to have first gone to sea in Dutch service, under the illustrious Admiral Michiel de Ruyter in the Second Anglo-Dutch War (1664-67), from which the Dutch emerged victorious. 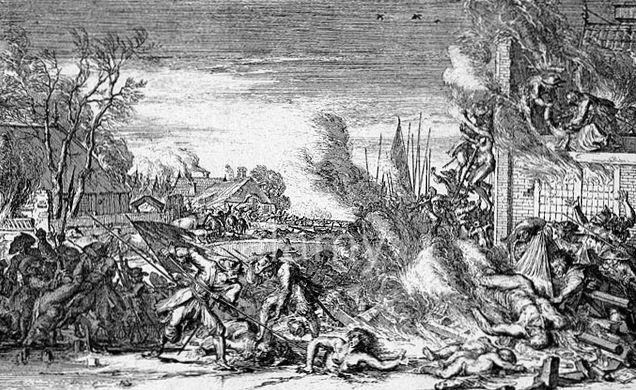 In 1672 France invaded the Dutch Republic, the so-called United Provinces. The Dutch fought back ferociously, so initiating six-years of warfare in which, surprisingly in view of later history, Britain was to be France’s ally for the first two years. Jean Bart now entered French service, not as a naval officer – a rank not open to men of humble birth – but as a privateer operating out of Dunkirk. Such privateers were privately-owned ships sailing under a “letter of marque”, with government backing, and were frequently funded by syndicates of investors. Bart’s raids on Dutch commerce during the first years of the war were so fruitful that in 1675, at his own expense, he could afford to equip a sloop carrying two guns and 36 men. With this he at once captured a Dutch warship mounting eighteen guns and crewed by 65 men. He continued to take prizes and could now afford to fit out a 10-gun ship, promptly capturing a Dutch 12-gun vessel. He then was given command of five frigates, and on March 4th, 1676, captured an 18-gun Dutchman. Shortly afterwards he met eight British merchant ships, escorted by three warships. He promptly captured one of the escorts, drove the others off, and took the merchantmen into Dunkirk. In September of the same year he captured the Neptune, a 36-gun frigate, and her entire convoy. During the six years the war lasted he took 49 vessels in total.

With peace restored Bart, despite his lowly birth, was awarded a lieutenant’s commission – a first step in the Royal French Navy that was ultimately to carry him to the rank of admiral. He was now given command of a 14-gun ship and sent to cruise off North Africa against the Barbary corsairs who were to be a scourge of European – and later American – shipping for another century and a half. This resulted in capture of a large armed-xebec which was brought back to Toulon as a prize.

In 1683 France was at war again, this time with Spain. It lasted less than a year but it gave Jean Bart the opportunity to take a Spanish vessel carrying 350 troops, which he sent in to Brest. He followed this up by capturing two warships off Cadiz, receiving a severe thigh-wound in the process.

King Louis XIV’s territorial ambitions were to trigger war again in 1688, a nine-year conflict which was to pitch France against the so-called “Grand Alliance” of the Dutch, British, Holy Roman Empire and several lesser principalities. For Jean Bart this was the start of the most spectacular part of his career. He now commanded a 24-gun frigate, and immediately took a Dutch privateer, but his luck ran out when he ran into met two 50-gun British ships. Taken prisoner, he was brought to Plymouth but was to make a daring escape, stealing a boat and rowing in two and-a-half days across the Channel to near St. Malo on the coast of Brittany. 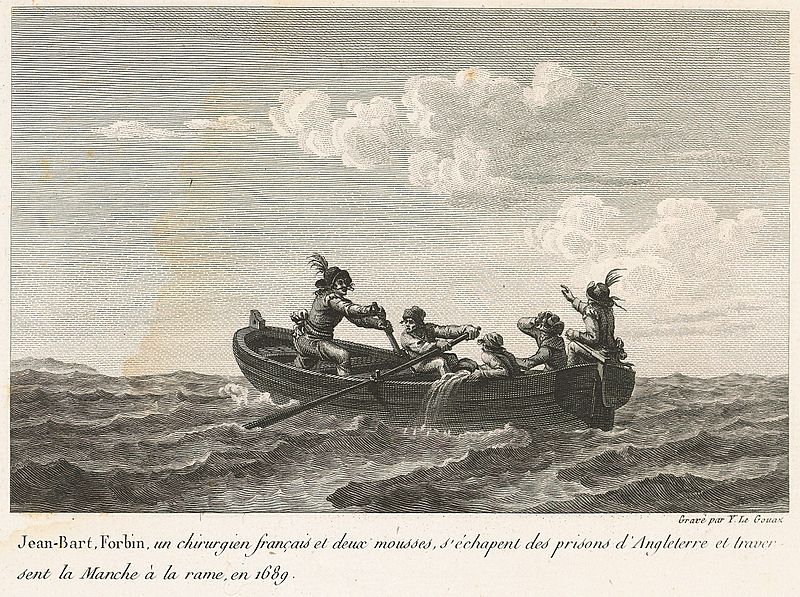 Now a national hero, Jean Bart was promoted to captain and given command of the frigate Alcyon. In her he was to fight under the Count de Tourville at the Battle of Beachy Head (1690) in the English Channel – known by the French as the Battle of Béveziers –   a French tactical victory which resulted in British and Dutch losses of eleven ships for no French loss. This gave the French temporary control of the English Channel but de Tourville did not follow up the victory. The battle is unique in that both commanders, British and French, were to lose their commands because of their poor performances. 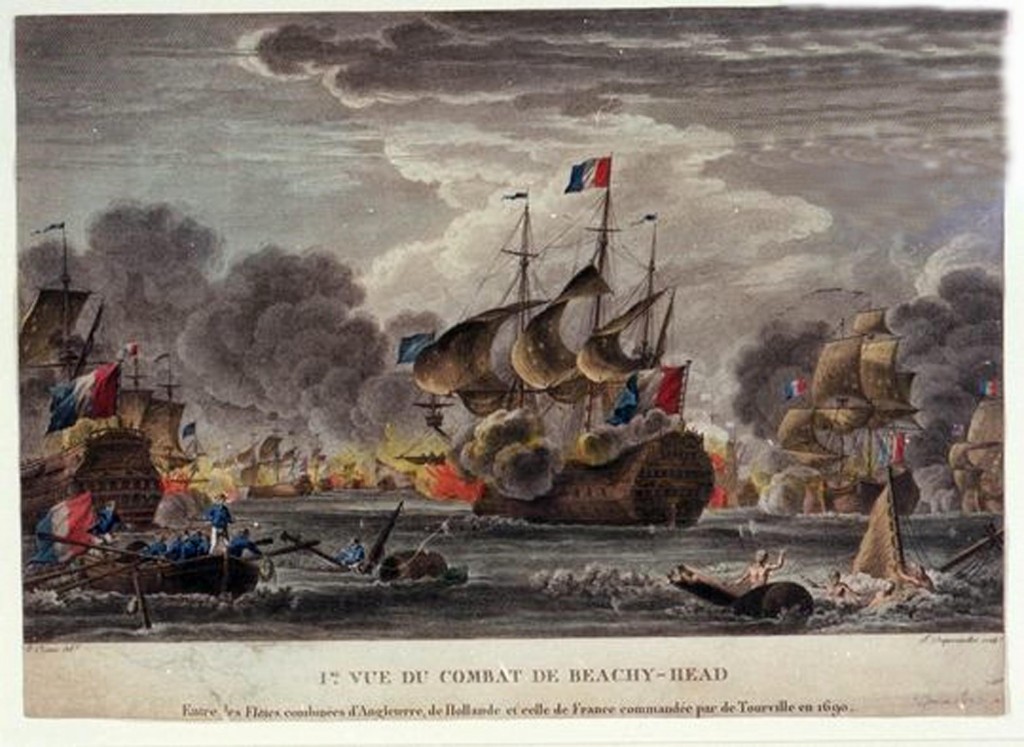 The Battle of Beachy Head, July 1690, by Nicholas Ozanne

Jean Bart’s next assignment was escorting merchant shipping from Hamburg to Dunkirk, an activity he combined with successful commerce-raiding in the North Sea. By 1691 however enemy forces had blockaded Dunkirk. Bart escaped with several small vessels, slipped out at night and opened fire on the blockading squadron as he passed. The following evening he captured two British ships, of 40 and of 50 tons respectively, together with merchant ships he took in to Bergen, in neutral Norway. He then directed his attention to savaging a large Dutch fishing fleet, burning most of them, seizing their escorts and  landing their crews in England coast, then going on north to plunder and burn villages on the Scottish coast.  Again blockaded in Dunkirk , he once more broke out successfully in October 1693 and immediately hurled himself on British shipping, sustaining his record of captures, raiding the English coast near Newcastle and returning with enormous spoils. Sallying out again from Dunkirk with three frigates, he captured more merchant vessels before engaging a convoy escorted by three men-of-war. Two of these he captured but the third, a 54-gun vessel, fought off three attempts to board her. She made her escape, abandoning the convoy to Bart. 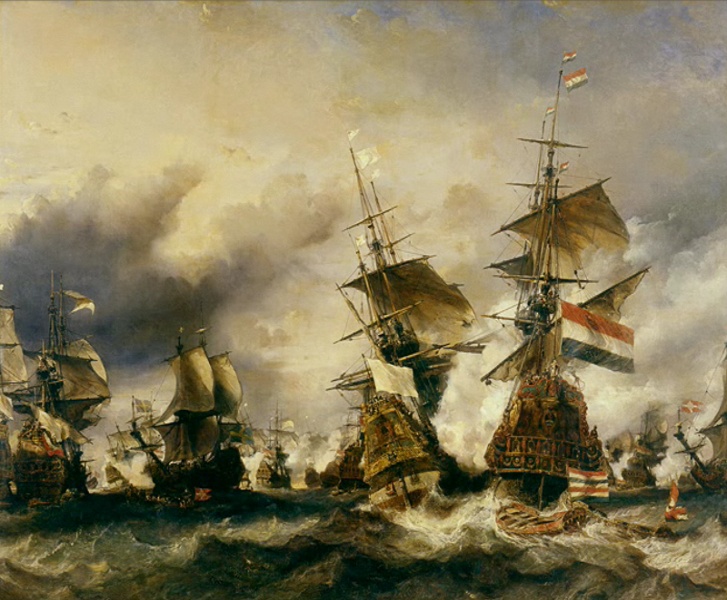 The Battle of Texel, June 1694, by Eugene Isabey

The battle that was to earn Jean Bart his title of nobility was fought off the Dutch island of Texel on 29th June 1694 when, with a flotilla of seven ships, he recaptured a French convoy which had earlier that month been taken by the Dutch. He also took three warships of the eight-strong escort.  Greeted with rapture on his return to Dunkirk, he found himself invited to Versailles to receive the personal congratulations of Louis XIV.

Bart’s last triumph in the North Sea was at the Battle of the Dogger Bank on 17th June 1696. It was initiated by his locating a Dutch convoy of 112 merchantmen, escorted by five warships. Speed was essential, because a large British squadron under Admiral John Benbow was searching for Bart’s force of seven ships. Bart threw his own ship nevertheless at the Dutch flagship, the Raadhuis van Haarlem, capturing it in a three-hour battle. Four more Dutch warships surrendered. Bart then burned 25 merchant ships, making away to the east only as Benbow’s squadron hove into sight. A year later the Treaty of Rijswijk brought the war to an end, and with it Bart’s fighting career. He died five years later, still a relatively young man, yet one who had packed more into a single life than the vast majority of men ever dream of. 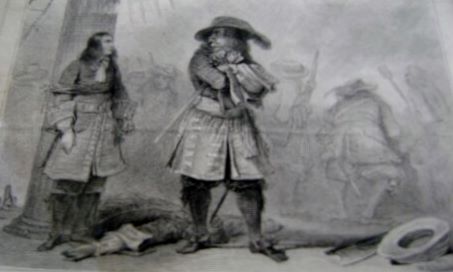 Jean Bart was to achieve mythic status in death, the embodiment of an “up and at them” tactical commander rather than a strategist. Records indicate that he captured a total of 386 ships, besides sinking or burning many more. Some of the stories told of him may or may not be true, but even the fanciful ones hint at the nature of his character. One tale has him causing outrage among courtiers at Versailles by smoking his pipe in the ante-room while waiting for an audience with Louis XIV. On the king asking him how he broke the blockade at Dunkirk, he is said to have arranged the courtiers present in a line, then attacking them with his fists, knocking them down, as a practical demonstration. In 1697, towards the end of the war, he was tasked with carrying the Prince de Conti (François-Louis de Bourbon), the French candidate for the Polish crown, to Danzig. This demanded slipping six frigates through a tight enemy blockade. When clear of danger, the prince asked Bart if he had not been afraid that the enemy might have captured them. Much to the Prince’s horror, Bart informed him that not the slightest danger of such a contingency had existed, as his son had been stationed with a match in the magazine to blow up the ship upon receiving a pre-arranged signal. Another story has him tying his own son to a mast during an action to cure him of fear of death and gunfire.

Jean Bart’s memory has been preserved in the French Navy, some 27 ships being named for him since his death. The most famous was France’s last battleship, which in November 1942, when only partly completed, was to fire on American warships during the Casablanca landings until silenced by dive bombers from the carrier USS Ranger and five 16-inch hits by the USS Massachusetts. This was one of the last occasions when American forces fought the French. Finally completed after WW2, she was to remain in French service until 1961. The current vessel is an anti-aircraft frigate launched in 1988.

The name of Jean Bart lives on.