Skip to content
The loss of HMS Royal George 1782

The disaster that overcame the line-of battle ship HMS Royal George in 1782, while anchored in calm water in sight of shore, was to have as strong an impact on the contemporary public mind as the loss of the RMS Titanic was to have one hundred and thirty years later. The tragedy was all the more terrible for the fact that it would have been avoidable if the simplest of precautions had been taken – and without them over 900 men and women were to die. 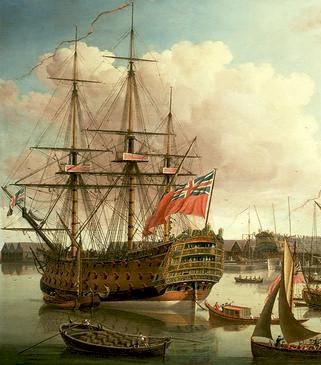 When launched in 1756 the Royal George was the largest warship in the world at some 2000 tons, a length of 180 feet and armed with over a hundred guns. The 28 42-pounders and equal number of 24-pounders she carried gave her massive ship-smashing power.  She was to see significant action in the Seven Years War, then commencing, and was to serve during it as flagship for two of the Royal Navy’s greatest names, Admirals Anson and Hawke. It was from her that Hawke was to command the fleet that inflicted such a crushing defeat on the French at the Battle of Quiberon Bay in 1759, in the course of which she sank the French ship Superbe. She was to render equally valuable service during the American War of Independence, operating against the French and Spanish fleets in the Eastern Atlantic and participating in the “First Relief” of the Siege of Gibraltar in 1780 when troop reinforcements and supplies were landed on The Rock. Thus was not the end of the siege however and it was destined to drag on for another three years.

The Royal George returned to Britain for a major refit in 1780 and saw service with the Channel Fleet thereafter. By August 1782, with the siege still in progress, she was to join a new expedition to relieve Gibraltar as flagship of Admiral Richard Kempenfelt (1781-1782, see portrait on left). She was moored off Spithead – the Royal Navy’s Portsmouth anchorage – and was taking on supplies on August 28th when, during deck washing, the ship’s carpenter discovered that the pipe used to draw clean seawater on board was defective. The inlet of this pipe, on the starboard side, was some three feet below the waterline and to access it would demand heeling the ship over to expose it. This was done by running out the guns on the ship’s port side as far as they could go and drawing in the starboard guns, securing them amidships. This action not only exposed the mouth of the pipe to starboard but brought the sills of the open gun-ports on the port side within inches of the water’s surface. 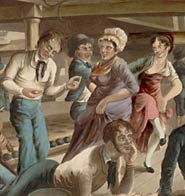 Though the exact number could never be confirmed it was estimated that up to 1200 people were on board, including some 300 women and 60 children. Many were undoubtedly family members taking leave of their menfolk but contemporary accounts also refer – delicately – to ladies “who, though seeking neither husbands or fathers, yet visit our newly arrived ships of war”. A number of traders and pedlars also appear to have been present.  One suspects that the scene below decks was a bizarre mix of the domestic, the poignant and the debauched, brief moments of happiness, sadness and orgiastic pleasure snatched in brief hard lives.

In mid-morning a slight breeze began to ruffle the water and it lapped occasionally over the port-sills on the port side. This appeared to drive up mice from the lower part of the ship and they began to be hunted as a game. The wind was freshening further and yet more water began to spill in, but nobody had yet perceived the situation as dangerous. A 50-ton sloop, the Lark, had come alongside with supplies of rum and she was secured to the port side to allow transfer of kegs. 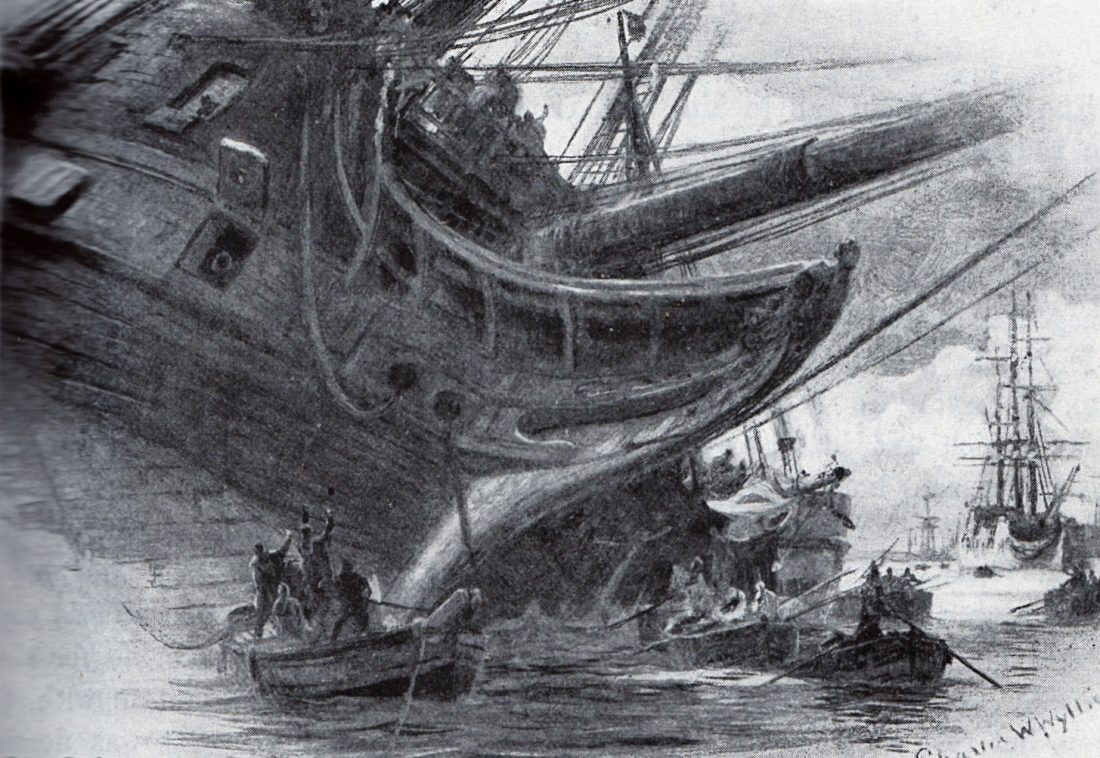 It was the carpenter who first awoke to the hazard and he went to the nineteen-year old lieutenant of the watch, Philip Charles Durham (1763-1845), to request an order to right the ship. He was ignored at first attempt but at the second Durham told him “If you can manage the ship better than I can, you had better take the command.”  Only when the ship heeled lurched further did the lieutenant order the drummer to beat to “right ship”. It was too late – a gust of wind heeled her still further and many of the starboard guns appear to have broken loose and rolled to port. Water was now pouring in through every port. The huge ship rolled on her side until her masts lay flat on the water, the mainmast bearing down on the sloop Lark alongside. The Royal George now sank like a stone, taking the sloop with her. 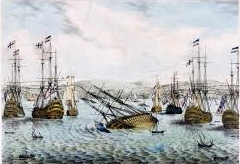 Admiral Kempenfelt was being shaved in his quarters as the ship rolled but the movement jammed the doors and he could not be got out. Hundreds of others were equally unlucky and the majority of 255 saved were already on deck. These were to save themselves by running up the rigging, while only about 70 were able to scramble out from below through the ports. The presence of so many other ships in the anchorage meant that rescue boats were quickly on the scene but this was little help for the wretches trapped below deck. 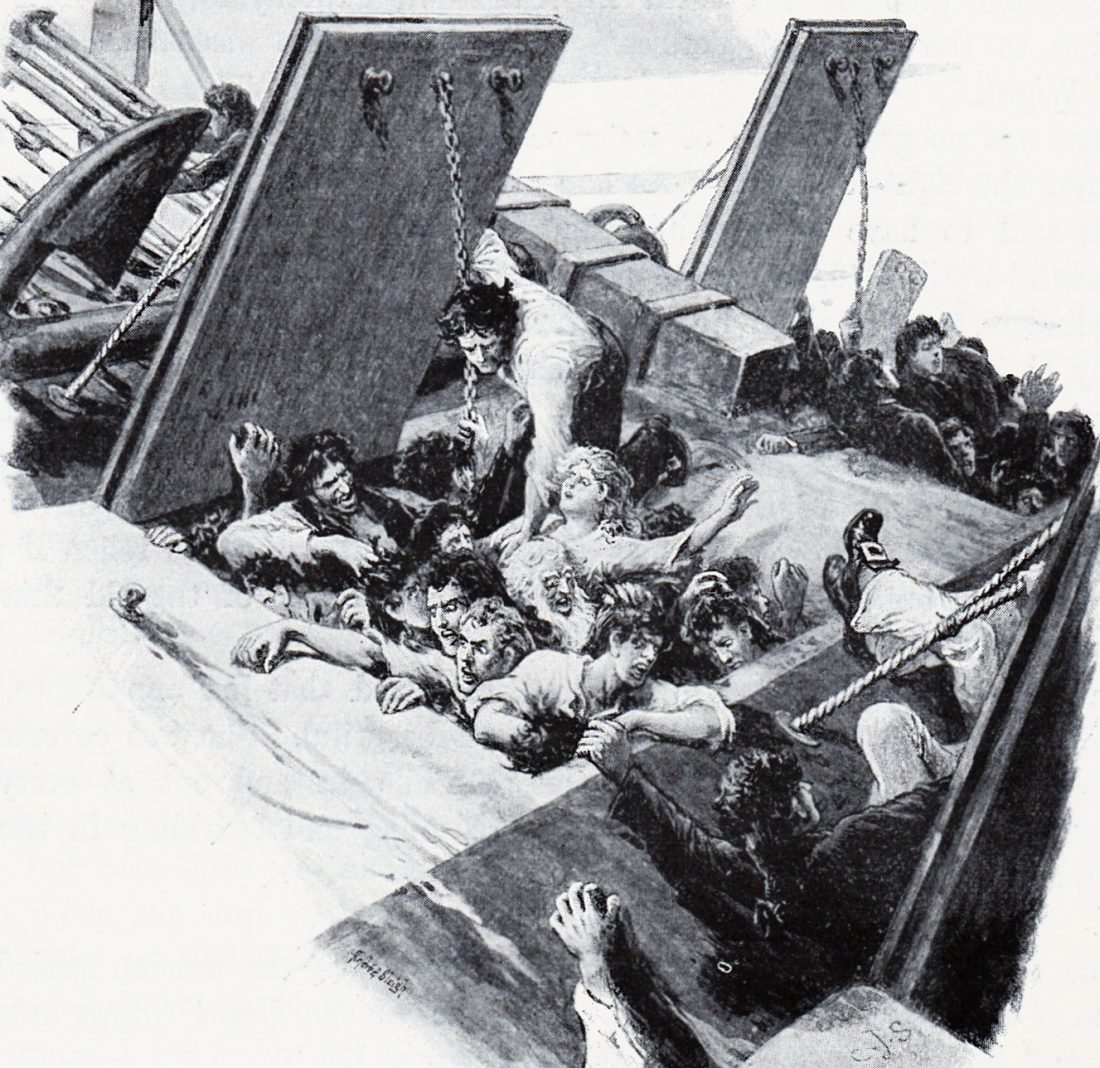 The scramble through the open gunports (Victorian-era illustration)

One survivor, named Ingram, managed to get out through a port and looking back saw the opening “as full of heads as it could cram, all trying to get out.” He went on “I caught hold of the best bower anchor, which was just above me, to prevent falling back into the porthole and, seizing hold of a woman who was trying to get out of the same porthole I dragged her out.” He was sucked down with the vessel but rose clear to the surface and swam to a block floating near. Using this to support him he saw the Admiral’s baker in the shrouds of the mizzen-topmast, which was just above water, and behind him, still floating, the woman he had pulled free. With the baker’s help he managed to catch her and secure her to the rigging. A rescue boat took her to HMS Victory – Nelson’s future flagship – and she appears to have survived.  Another survivor was a child who was playing on deck with a sheep as the vessel rolled and as he spilled into the water he managed to keep hold of the animal’s fleece. It swam about, supporting him, until a boat reached them. The Royal George’s captain was another survivor, but the carpenter drowned. 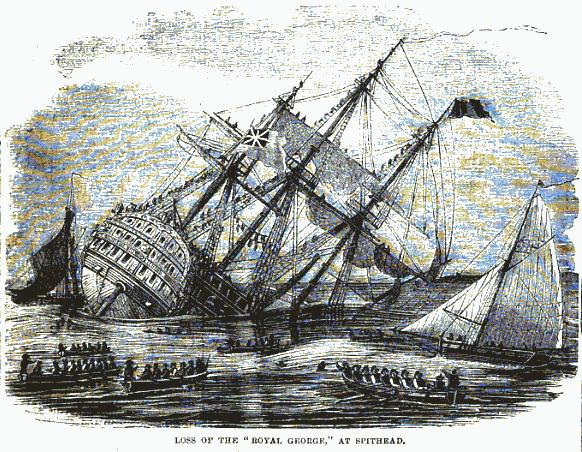 The final roll – note the figures in the rigging
(incorrect depiction – the Royal George rolled to port!)

The final death-toll was estimated to be over 900, including all but a few of the women and children. A few days after the ship sank bodies started to come up. It is a sad commentary on human nature that many of the watermen who made their living by ferrying families and traders to and from the ships stripped the bodies of buckles, money and watches. One witness wrote of these bodies “towed into Portsmouth harbour in their mutilated condition, in the same manner as rafts of floating timber, and promiscuously (for particularity was scarcely possible) put them into carts, which conveyed them to their final sleeping place in an excavation prepared for them in Kingston churchyard”.

The Royal George had sunk in relatively shallow water and she righted herself of her own accord, so that the tops of her masts were still visible seventeen years later. All attempts to salvage her failed until the 1840s, when the wreck was blown apart with gunpowder charges and advances in diving equipment allowed recovery of guns and equipment. Her surviving timbers were raised, much of the wood being sold as relics. 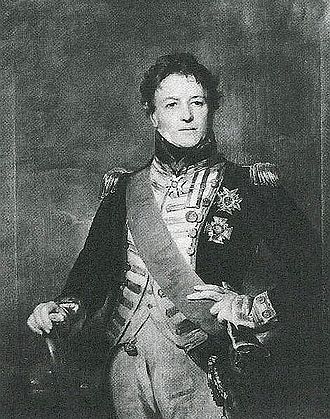 The inevitable court martial in the aftermath of the sinking acquitted the officers and crew of responsibility and blamed the accident on the “general state of decay of her timbers”,  suggesting that part of the frame of the ship gave way under the stress of the heel. One of the few survivors was the man perhaps most responsible for the loss, Lieutenant Philip Charles Durham, was a survivor (see at left in 1820). He was to have a very active further career throughout the Napoleonic wars, once being reprimanded for being “over zealous”. For some time he commanded HMS Anson, the largest frigate in the Royal Navy and he was to command HMS Defiance at Trafalgar. He acted as a pall-bearer at Nelson’s funeral. He was a very colourful – indeed controversial – figure both ashore and afloat and he ended as a full admiral, dying in 1845 at the age of 81.

This series now comprises six novels – with a seventh due in 2018, as well as short stories made available free to readers who sign up to the mailing list.  The novels so far are set in the 1870s and 1880s and are centred on the life of Admiral Sir Nicholas Dawlish (1845 – 1918) and his wife Florence (1855-1946).  The plots are set in locales as varied as Turkey. Paraguay, the United States, Cuba, Korea, Britain and the Sudan and are linked to real-life events and real-life personalities. Historian and novelist Joanne Druett has described Antoine Vanner as “The Tom Clancy of historic naval fiction” in view  of the attention paid to the technology of this age of rapid transition. Click here, or on the banner below, to  get an overview.