What was later hailed as The Great Siege of Gibraltar (1779-1783) was one of the great epics of the American War of Independence , even though it took place far from American shores. Gibraltar had been captured by Britain in 1704 and in the intervening years “The Rock” was heavily fortified, batteries and tunnels being hewn out of the rock itself. Its availability as a naval base in the Anglo-French wars of the mid-18th Century was of major strategic value to Britain, lying, as it did, on the entrance to the Mediterranean. It was not surprising therefore that during the American War of Independence (1775-83) its capture was an objective of the greatest importance for Britain’s enemies. France had joined the conflict in 1778 and Spain was to do likewise in the following year. Plans were immediately put afoot to seize Gibraltar. Spanish troops constructed siege-lines across the mile-wide isthmus connecting Gibraltar to the Spanish mainland and a close-blockade was initiated by Spanish vessels operating out of Algeciras, across the bay from The Rock. A more powerful Spanish naval force – eleven line-of-battle ships and two frigates – was based at Cadiz, some 60 miles to the west so as to intercept British reinforcements. 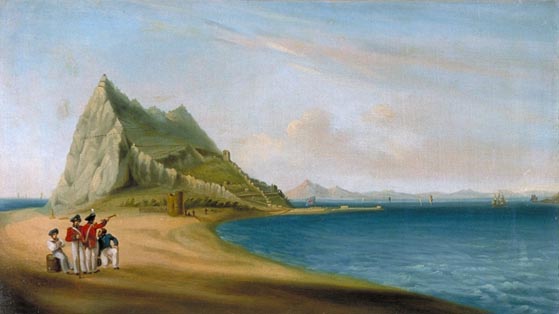 Gibraltar before the siege – seen from across the isthmus from Spanish territory  (painting by a John Mace, about whom little is known – with acknowledgement to the splendid Chipulina Family blogsite – http://neville-chipulina.blogspot.co.uk/)

British forces – some 5300 troops under Governor-General, General George Eliott, and including Hanoverian and Corsican contingents – had already begun strengthening the defences. This was to make an attack across the isthmus difficult and increased the importance of the naval blockade. General Elliott placed special emphasis on the value of heated shot and ordered building of more furnaces and grates for the purpose. However, strong the Gibraltar defences might have been, the nature of the terrain meant that its ability to provide sufficient food, whether vegetable or animal, was limited in the extreme. By the end of 1779 bread was being made available only to children and the sick, the rest of the garrison being fed with increasingly scarce salt meat, hard-tack biscuits and a little rice. Given this diet, and the shortage of vegetables, it was not surprising that scurvy should make its appearance. 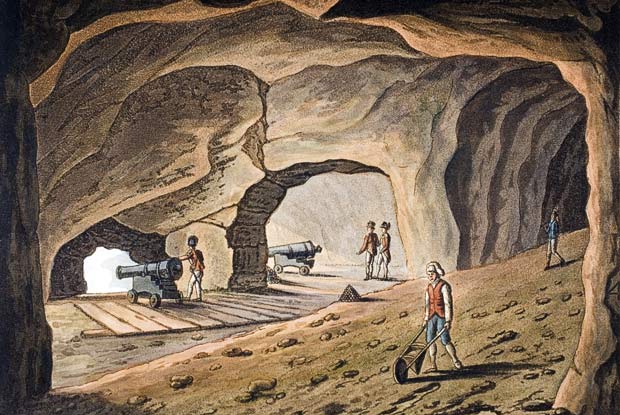 Relief arrived in January 1780 when Admiral George Rodney, after defeating the Spanish Cadiz fleet in the First Battle of Cape St. Vincent, arrived with over 1000 reinforcements and sufficient supplies to allow Gibraltar garrison to continue to hold out, albeit still on short-commons.  The siege continued however through another increasingly hungry year, with indecisive fighting along the landward siege-lines and a few small fast blockade-runners carrying limited supplies from the British base at Minorca. 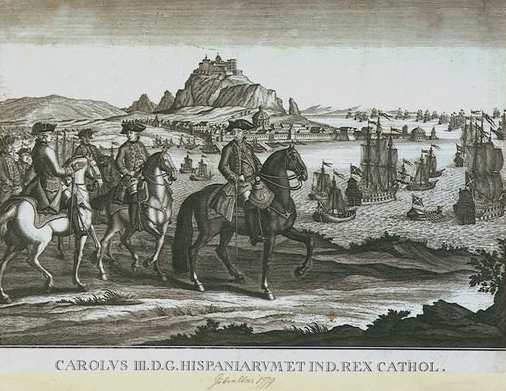 King Carlos III of Spain, come to view the siege

It was not until April 1781 that a massive British naval force – 29 ships of the line escorting 100 store ships – commanded by Vice Admiral George Darby reached Gibraltar despite Spanish efforts to intercept it. (The analogy with the huge “Operation Pedestal” convoy to relieve Malta in 1942 is very striking). The enemy was unable to prevent Darby carrying Gibraltar’s civilian population to Britain when he withdrew, thus reducing the pressure of “useless mouths” on food supplies.

“The Rock”  –  again with acknowledgement to the Chipulina Family blogsite

In late November 1781, fearing that the enemy land-forces were about to make an attack from the siege lines, General Eliot launched half the British garrison on a pre-emptive strike or “sortie”. This succeeded brilliantly, carrying trenches, spiking batteries and destroying supplies. The British attackers then withdrew, having done enough damage to prevent an immediate assault. But the siege still dragged on.

“The Sortie Made by the Garrison of Gibraltar” by John Trumbull

The climax was to come in September 1782 when combined French-Spanish forces launched a massive attack.  Some 35,000 Spanish and 8000 French troops, supported by heavy artillery, were dedicated to the land assault but the threat from seaward was even more daunting. Eighteen ships-of-the-line, 40 gunboats and 20 bomb ketches were deployed. The most notable innovation was however use of “floating batteries”, mounting 138 heavy cannon, which were towed into position to take Gibraltar’s shore fortifications under fire. Designed by an eminent French engineer, D’Arcon, these batteries were supposed to be impervious to “heated shot”.  This latter point is of special significance.

Accounts of naval operations against shore fortifications in the “Age of Fighting Sail” make frequent references to the use of “heated shot” – cannon balls warmed to white heat in furnaces before firing. When used against wooden ships such shot was capable of setting their targets ablaze. For obvious reasons the ability of sailing vessels to respond in kind was all but impossible and heated shot remained the perquisite of shore batteries, many of which equipped with specially built furnaces. Each glowing ball was carried to the gun by two men, having between them a strong iron frame. The gun was loaded with a powder charge in the usual way, but with two heavy wads, one dry and the other slightly damped, to separate the powder and the ball. The chance of the wadding taking fire must always have been present and the consequences of this would have been deadly. Loading guns in this way must have been a nerve-racking business.

French confidence in their floating batteries ability to withstand such attack was misplaced – the heated shot was about to come into its own. To supplement the usual portable furnaces, which were insufficient to supply the demands of the artillery, Governor Eliot ordered large bonfires to be kindled. On these the cannon-balls were thrown – they were referred to by the gunners as “hot potatoes”. Heated almost to incandescence the shot was transported to the guns in wheelbarrows filled with sand. 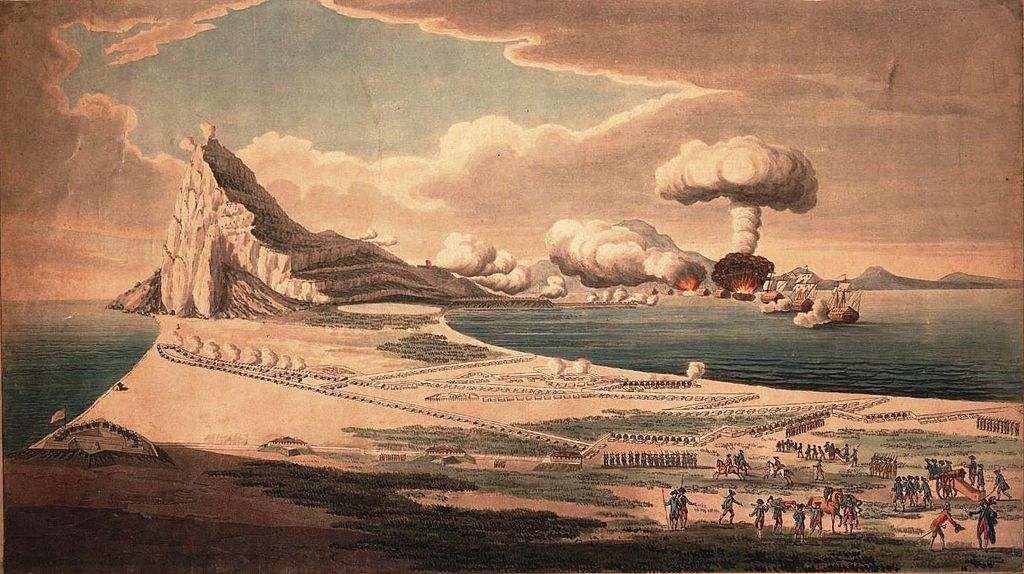 The floating batteries, unable to manoeuvre without assistance, proved to be highly vulnerable. Three took fire and exploded while another seven were so heavily damaged that they had to be withdrawn with high casualties. The Count d’Artois (1757-1836), brother of the doomed French King Louis XVI, and himself fated to reign as Charles X from 1824-1830, had hastened from Paris to observe this “Grand Assault”, in full expectation of a capitulation. He arrived instead in time to see the total destruction of the floating batteries and a large part of the combined fleet. The land attack was repulsed no less successfully. (It is ironic to note that Charles would later be  a refugee, and an honoured guest, in Britain from 1805-1814, living in comfort in London’s South Audley Street, London, only returning to France when Napoleon fell and the Bourbons were restored). 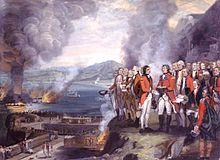 Recognising that this “Grand Assault” had failed, the French and Spanish continued the siege as before, still in the hope of starving out the desperately poorly supplied British garrison. Measures were meanwhile afoot in Britain to send a large relief force –34 ships-of-the-line and 31 transports laden with  food and ammunition as well as further troop reinforcements – under Admiral Richard Howe. It arrived off Cape St Vincent in early October and the French-Spanish force sent to intercept it was fortuitously scattered by a gale, allowing Howe an easy entry into Gibraltar. 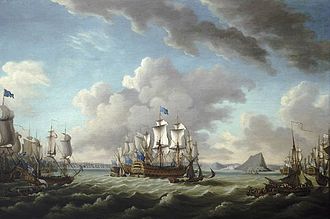 The ending of the Great Siege of Gibraltar: Howe’s relief expedition arrives – by Richard Paton

Now strongly reinforced, the Gibraltar garrison held out until the end of hostilities in February 1783 the siege was lifted. With a duration of three years and seven months it was the longest siege in British history and the battle-honour of “Gibraltar” was to one of the most highest prized that any regiment might justly boast of. 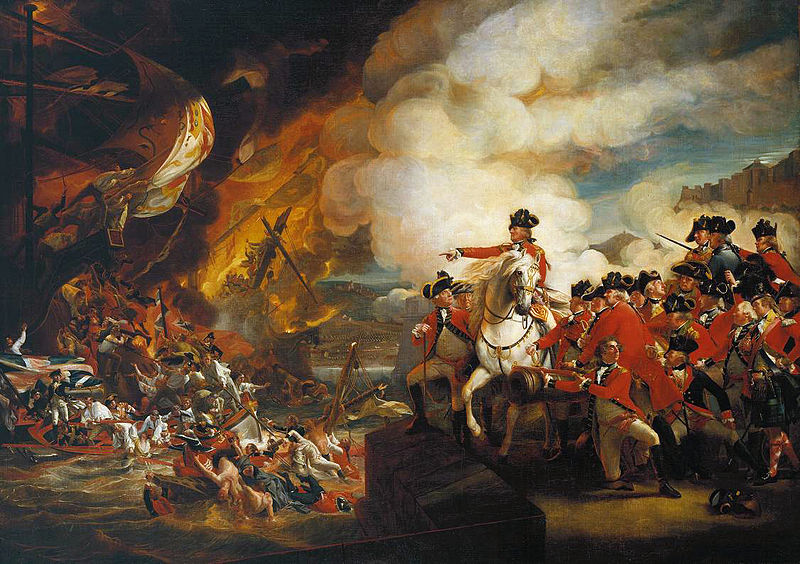 “The Siege and Relief of Gibraltar” by John Singleton Copley – art on a heroic scale!

The siege was recognised as an epic in its own time, as witnessed by the paintings made of it by several distinguished artists. The ultimate accolade was perhaps a “bardic song” about the relief set to music by Mozart and of which only a fragment remains. Unfortunately, Mozart didn’t like the style of the poem and never completed the work!

This series now comprises eight novels as well as short stories made available free to readers who sign up to the mailing list.  The novels so far are set in the 1870s and 1880s and are centred on the life of Admiral Sir Nicholas Dawlish (1845 – 1918) and his wife Florence (1855-1946).  The plots are set in locales as varied as Turkey, Denmark, Paraguay, the United States, Cuba, Korea, Britain, East Africa and the Sudan and are linked to real-life events and real-life personalities. Historian and novelist Joanne Druett has described Antoine Vanner as “The Tom Clancy of historic naval fiction” in view  of the attention paid to the technology of this age of rapid transition.  Click here, or on the banner below, to  get an overview.