We know now that 1918 was the last year of World War 1, and that it would culminate in total defeat of Germany with the “Last Hundred Days”, in which the trench lines were breached and open warfare resumed, representing the greatest single victory in British military history. There was however little reason to hope for such Allied success within the year as it opened. Germany’s position was stronger than it had been since 1914. It had knocked Russia out of the war, and by the brutal peace terms it was inflicting on it by the Treaty of Brest-Litowsk, then being dictated, Germany would be able to loot agricultural and other resources of Western Russia and the Ukraine.  More important still, the battle-hardened German divisions on the Eastern Front could now be sent westwards, so as to mount a massive offensive on the British and French Armies before the Americans would arrive in force. In the previous year the British, though still full of fight, had sustained massive casualties but the French had almost broken and troop-morale was being restored only slowly after of a rash of mutinies. At sea the Germans’ U-boat unrestricted campaign against Allied shipping was continuing to inflict fearful casualties and only the belated decision to institute convoys would save Britain from serious food shortages. Just how savage this U-boat campaign had become is illustrated by the sinking of the hospital ship HMHS Rewa on January 4th 1918. 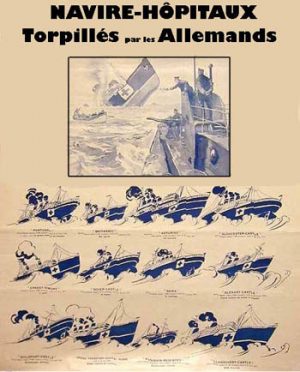 This blog was previously dealt with other hospital ship sinkings. Some may indeed have been the result of errors and usually claimed to be so by the German government. Such sinkings were essentially “own goals” for Germany, triggering massive outrage among the Allies, hardening resolve to fight to the bitter end and offering golden opportunities for anti-German propaganda. Germany, like every other combatant, was officially committed by The Hague Convention of 1907 to regard hospital ships as immune to attack. They were to be clearly marked (typically with white hulls and prominent red crosses, and be illuminated at night), should offer succour to friend and foe alike, and should not be used for military purposes. To counter claims that such ships were providing a disguise for carrying troops and military supplies – which would thereby have made them legitimate targets – efforts were made by Britain to have neutral observers inspect them and guarantee that the rules were being followed. One such ship was HMHS Rewa, which in December 1917 left the Eastern Mediterranean to carry 279 Allied casualties to Britain. At Gibraltar, Spanish observers – Spain being neutral in the conflict – boarded her and confirmed compliance. 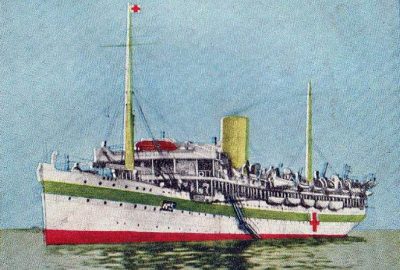 Rewa in hospital-ship markings. Illustration found, with thanks, on the splendid  website of France’s Société d’Archéologie et de Mémoire Maritime

Like most hospital ships the Rewa was a converted passenger steamer, in her case being a relatively new ship which had been in service for the P&O Line from 1906 to 1914 on the Britain to India route. During this time she undertook charters as a troopship as well as maintaining scheduled passenger services.  Of 7300-tons and 456-feet long, her 9300-hp steam turbines, driving three shafts, gave her a respectable top speed of 18 knots. On the outbreak of war in 1914 she was taken over for government service, thereby earning the HMHS designation. She saw particularly heavy duty during the 1915 Gallipoli campaign, evacuating wounded to Alexandria, Malta and back to Britain. 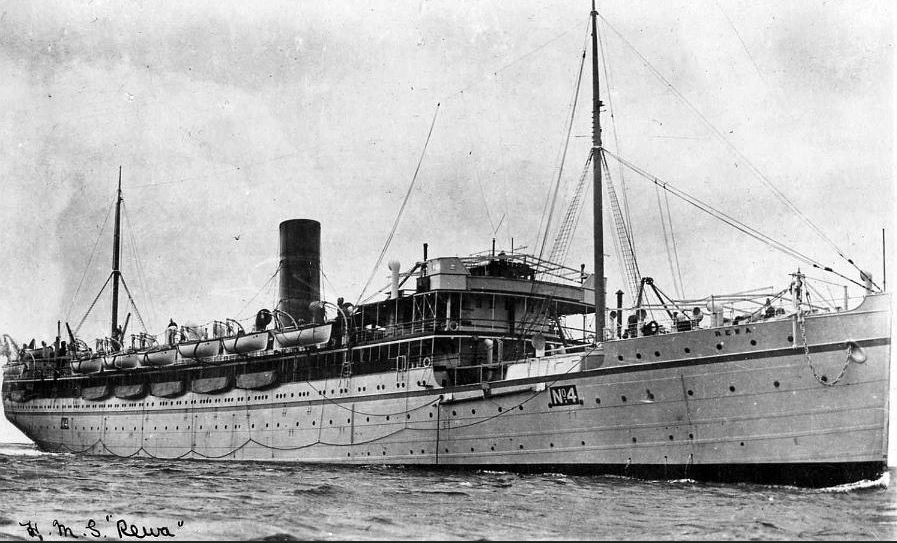 Rewa, possibly as a pre-war trooper, her white hull a protection against the heat in the  Red Sea and Indian Ocean

By 2315 hrs on January 4th 1918, the Rewa was off the north coast of Cornwall and a mere ninety miles for her final destination of Cardiff. There is little doubt that not only did she carry the requisite red cross markings but that she was brightly illuminated as well. This did not save her from attack by the large U-boat U-55, which hit her amidships with a single torpedo. Four crew members, all Indian, were killed in the boiler room – as it transpired, the only casualties of the attack. Though the Reva was clearly settling, and her lights were extinguished, order was preserved so that patients and crew could be loaded in the lifeboats. By the time the Rewa sank, plunging down by the bows, almost three hours later, everybody had been taken off safely.

The sinking of the Rewa was regarded – rightly – as a war crime and it was laid to the charge of the twenty-nine year old Kapitänleutnant Wilhelm Werner who had commanded the U-55 since April 1916. He was to prove remarkably successful, amassing a score of sixty-six ships and 130,000 tons sunk, as well as others damaged. At the ineffectual Leipzig war-crimes trials after the war he was charged with the sinking of Reba and an unsuccessful attack on another hospital ship, the Guildford Castle. A further charge was that in April 1917 he submerged U-55 after taking on deck 34 survivors of the armed 5600-ton steamer Torrington, leaving them to drown and taking only the ship’s captain back to Germany. He evaded retribution because of the half-hearted way that these trials were conducted. He escaped to Brazil, where he worked on a coffee plantation before returning to Germany around 1925, joining the Nazi party in 1930 and later sitting in the Reichstag as a National Socialist member. Thereafter he joined the SS and seems to have served on Himmler’s staff as well as commanding anti-aircraft units in the defence of Berlin. He did not long outlive his masters, dying on May 14th 1945 – one wonders if by suicide, like so many committed Nazis.

It is interesting to note from the example of the U-55 just how potent a weapon the submarine had become by this stage of the war. Of the U-51 class, she displaced 715-tons on the surface and was 214-feet long. She could make over 17 knots surfaced and some 9 submerged. With an operational range in excess of 7500 miles she could undertake long patrols. She carried two 19.7-inch (50-cm) torpedo tubes forward, and two aft, but of equal importance, when many merchant and practically all fishing vessels carried no wireless to transmit distress messages, she carried two 3.5-inch (88-mm) deck guns. It is probable that the majority of her victims were despatched by these guns. After the war the U-55 was allocated as war booty to Japan and served briefly there under the name O-3.

And now, a hundred years on, one wonders what reparations or pensions, if any, were paid to the families of the four Indians who died in the Rewa’s boiler room, humble victims of a conflict they most likely barely understood.

Lucky enough to have been given a Kindle ?

The Dawlish Chronicles series now comprises six novels – with a seventh due in 2018, as well as short stories made available free to readers who sign up to the mailing list.  The novels so far are set in the 1870s and 1880s and are centred on the life of Admiral Sir Nicholas Dawlish (1845 – 1918) and his wife Florence (1855-1946).  The plots are set in locales as varied as Turkey. Paraguay, the United States, Cuba, Korea, Britain and the Sudan and are linked to real-life events and real-life personalities. Historian and novelist Joanne Druett has described Antoine Vanner as “The Tom Clancy of historic naval fiction” in view  of the attention paid to the technology of this age of rapid transition. Click here, or on the banner below, to  get an overview.