My blog last week introduced us to Sir George Nares, a Royal Navy officer who first came to public attention for the trick he played to gain the honour for Britain of sailing the first ship through the Suez Canal. Were we to have judged Nares by this one exploit alone we would have expected him to have been an insolent, devil-may-care rover, much in the Cochrane and Jack Aubrey transition. The opposite was indeed the case for Nares was to prove himself one of the most systematic, meticulous and scientifically-oriented officers of his generation. Though of a later period, one suspects that Doctor Stephen Maturin would have found him a very congenial shipmate!

Of Welsh origin, Nares was born into a naval family in 1831, and he himself entered the navy at the age of fourteen.  He gained his first taste of Arctic exploration in 1852 when he sailed on HMS Resolute on one of the unsuccessful attempts to search for the remnants of the Franklin expedition among the islands north of Canada. Resolute had originally been a civilian ship, purchased for her stout construction and fitted with an internal heating system. Frozen into the ice during the winter of 1852/53, the spring thaw failed to release her and the decision was taken to abandon her. Resolute was left in an unmanned state that would allow further wintering – only the lowest sections of the masts left standing, the rudder shipped and all hatches caulked shut. 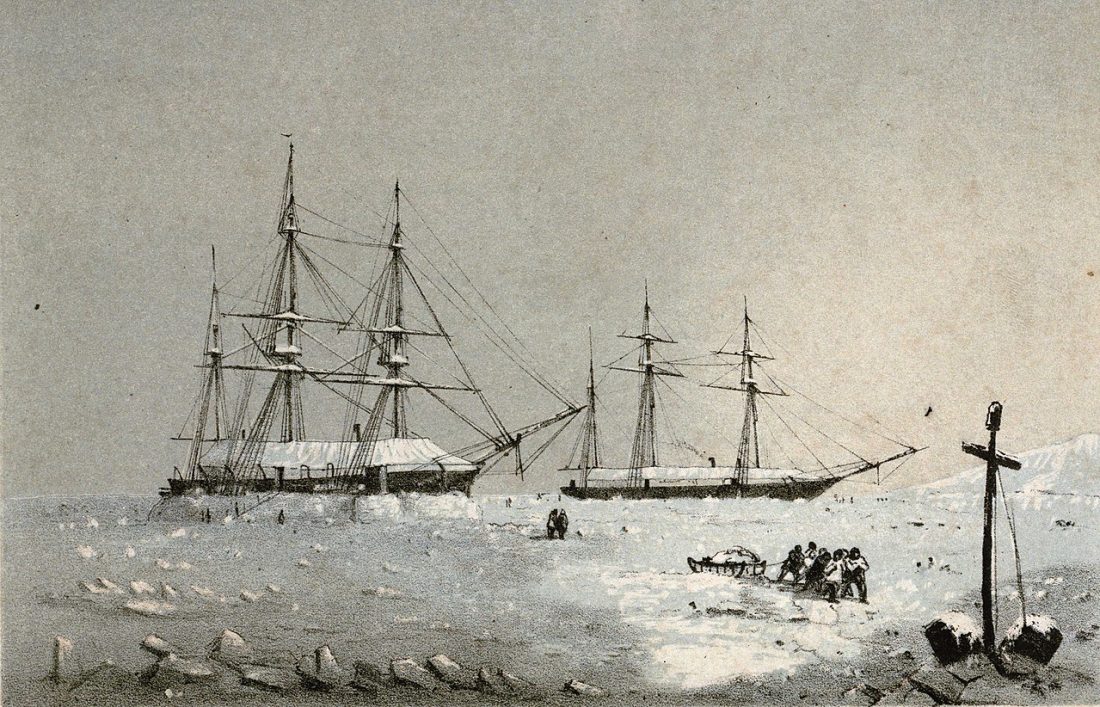 H.M.S Resolute and Intrepid frozen in the ice at Melville Island, winter 1852-53 .

As drawn by George Frederick McDougall,  master on H.M.S. Resolute.

The crew then had to make a hard trek across the ice to reach other expedition ships, which had broken free.  The Resolute was however to survive against all odds. An American whaler found her, in excellent condition, drifting 1500 miles from her point of abandonment. The American government purchased her from her salvers and presented her back to Britain as an inspired act of “national courtesy”. This was a diplomatic masterstroke – some forty years after the end of the War of 1812 Anglo-American relations were frequently less than warm and the two nations had flirted with war in 1844 over the issue of the location of the border of the Oregon territories with Canada (James K. Polk won the presidential election of that year with the slogan “Fifty-four forty or fight!” , demanding that the border follow the parallel of 54 degrees and 40 minutes north. In the event, agreement was finally reached on the 49th parallel. Had it been otherwise Canada today would be unlikely to have any outlet on the Pacific coast). The return of the Resolute was there a considerable act of conciliation, a move towards better relations that was emphasised by a visit to the ship by Queen Victoria herself. 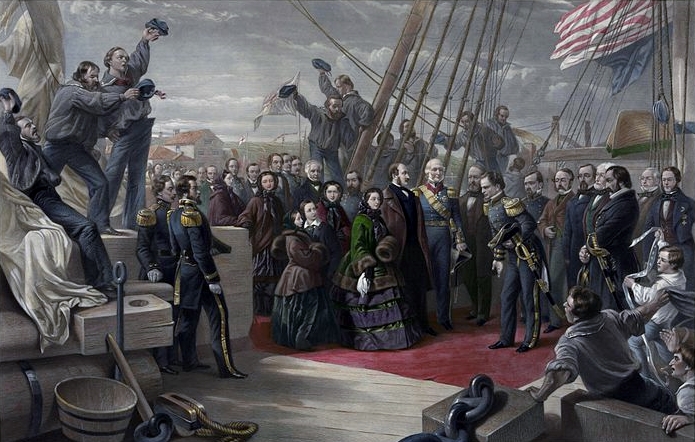 The outbreak of the Crimean War in 1854 put an end to Arctic expeditions and Nares found himself serving initially on the line-of-battle ship HMS Conqueror, and later on HMS Glatton.  This was an innovative craft, an armoured floating battery, one of five built by the British and French navies for bombardment of Russian coastal fortifications, but completed too late to see active service.  The years that followed saw Nares establishing himself as a gunnery and survey expert and he published a textbook for training of cadets. 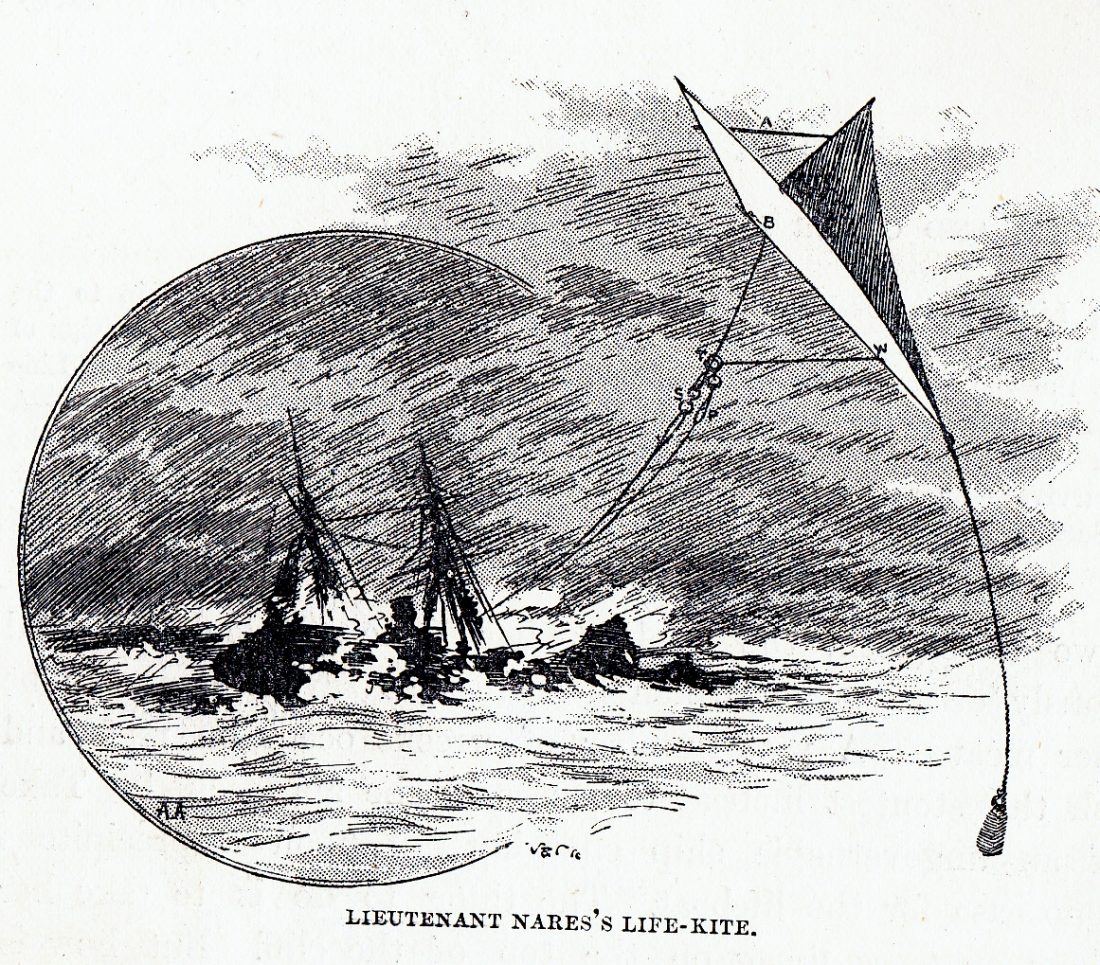 It is in this period that he invented the “Nares Life Kite” which would allow a wreck to land a line on a lee shore.  This large kite had a limited degree of manoeuvrability and its weight-carrying capacity could be adjusted by varying the angle included between the two side panels. The Victorian-era book in which the above illustration was found explains: “Suppose your wreck to be on a beach. You get the kite steady in the air with about 100 yards of the line out. You then take another line – about twenty yards will probably suffice – tie one end to the kite line and the other to a life-buoy. Let a man get into the life-buoy. Then veer away and the kite will pull the man shore through the surf… suppose, on the other hand, that you are near a cliff, with people standing on it, but unable to send help: you have to bend a long lead-line to the kite line; and when the people get old of this lead-line they can use it to pull a stronger rope ashore”. No information was however provided as to whether this kite was ever actually used – one suspects that dragging a man through the surf was easier in theory than in practice.  It is not known whether Nares ever tested the manoeuvre! 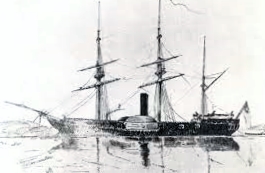 After 1865.now in command of his own ship, the paddle-sloop HMS Salamander, Nares did extensive survey work off Australia, including the Great Barrier Reef. This led in turn to command of another survey ship, HMS Newport, for work in the Mediterranean. It was in her that he was to perform his exploit at the Suez Canal opening ceremonies, as told in last week’s blog.

And that’s where we’ll leave him for now. In the next blog we’ll learn more about Nares’ role in the most ambitious oceanographic exploration voyage yet undertaken and his return to the Arctic.