In my recent blog about the loss of the steamer SS Utopia in Gibraltar harbour in 1891 (click here if you missed it) I commented on the fact that for almost a century insufficient provision of lifeboats a major factor in marine tragedies. Only the Titanic loss in 1912 was to evoke a sufficient measure of outrage for the problem to be finally addressed, even if the rules are not always enforced today. The spectacular loss of the SS Arctic in 1854, some 60 years before the Titanic was one of the maritime disasters that should have led to much earlier reform – and to the saving of countless lives. But it didn’t. 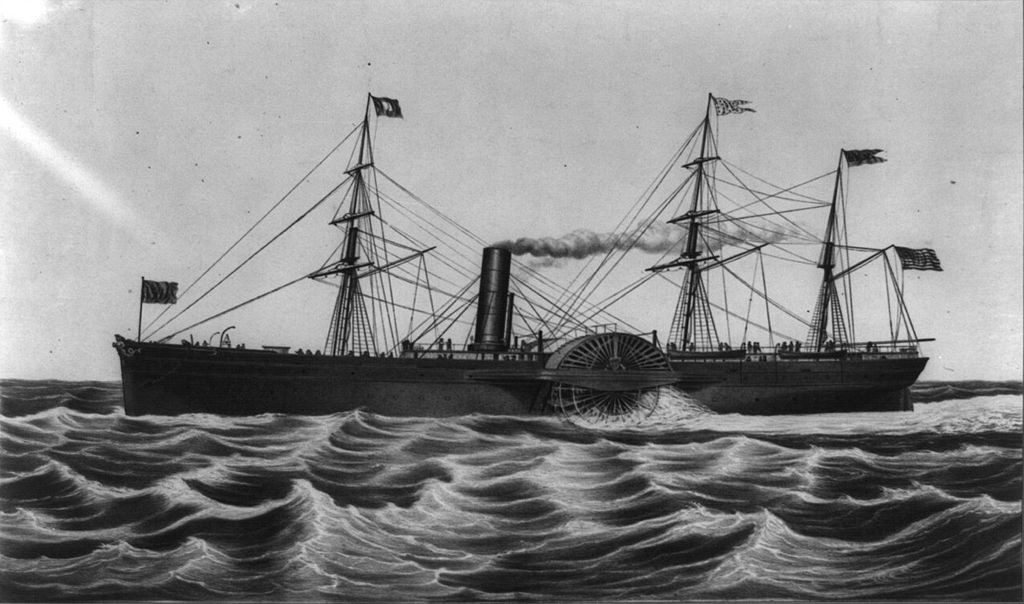 SS Arctic as seen in a contemporary illustration

In her time the Arctic, and her three almost identical sisters, represented the pinnacle of comfort, speed and modernity on the North Atlantic routes between Britain and North America. She belonged to the American “Collins Line” and carried both mail and passengers in direct competition with the prestigious British “Cunard Line”, a company which survives, and thrives, up to the present day. The company’s owner, Edward Collins (1802-1878) had grown his shipping company over three decades and the building, with government subsidies, and in American shipyards, of the Arctic, Pacific, Baltic and Atlantic allowed maintenance of a reliable regular-sailing schedule.

The Arctic entered service in 1850 and at 2856 tons and 284 feet length was the largest vessel operating in the North Atlantic, being twice as large as the rival Cunard vessels. Paddle-driven, her two 1000 hp engines gave her a maximum speed of over 12 knots and allowed her to make Atlantic passages in ten days or less. Speed was however expensive and her engines were coal-hungry, thus threatening  the economics of the venture. A further complication was that her wooden hull was strained by the installed power and needed regular repairs. For the time her accommodation was luxurious and included steam heating, running water, bathing provisions and even a hair-dressing salon. 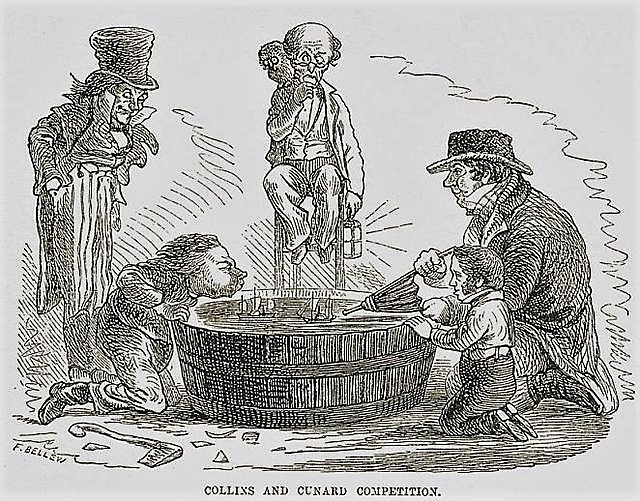 For four years the Arctic operated without major problems, establishing new standards of speed, comfort and reliability. In September 1854 however she left Liverpool for New York with 233 passengers, of whom 150 were first-class. Among them was Edward Collins’ own wife, with their son and daughter. Her crew amounted to 135 – not excessive in view of the fact that she could operate under sail as well as steam. The ocean passage went well until September 27th, when she reached a point some sixty miles south-east of Cape Race, Newfoundland, where she encountered a dense fog. Blinded, she collided with a much smaller vessel which crossed her bows, the French steamer Vesta, which herself had almost 200 on board, including 147 passengers.

The Vesta was initially perceived to be sinking and many, both crew and passengers, rushed her boats with the idea of getting across to the Arctic. One boat sank immediately and another was swept under the Vesta’s counter, so that all 13 on board were lost, but it was soon realised that the ship was not as badly damaged as had appeared initially. The bows had been crushed but the forward bulkhead was holding. The captain lightened the ship by her head, shored up the bulkhead and set off for St. John’s, Newfoundland, which was reached without further loss.

The seriousness of the damage to the Arctic, initially under-estimated, was now becoming apparent. Three holes had been smashed in below the waterline and it was apparent that she was flooding so fast that the engines would be soon extinguished. Her captain, James Luce, headed her for Cape Race but within four hours of the collision the water reached the furnaces, stopping the engines. Sinking was now imminent.

The Arctic carried six lifeboats only, capable of taking 180 persons, half of those on board. These boats were launched on Captain Luce’s orders but discipline broke down and there was no observance of “women and children first”. Members of the crew and able-bodied male passengers rushed to take most of the places. Antoine Agénor, Duc de Gramont (1819-1880), en-route to the United States to take up his appointment as French Ambassador, jumped into one of the last lifeboats. (This action doesn’t seem to have been held against him afterwards and he was later to reach high ministerial rank in the French government). The remaining passengers had to make do with makeshift rafts or went down with the ship.

The statement made by Captain Luce soon after the disaster describes the chaos. Part reads “I resolved to get the boats ready, and as many ladies and children placed in them as possible; but no sooner had the attempt been made than the firemen and others rushed into them in spite of opposition. Seeing this state of things I ordered the boats astern to be kept in readiness until order could be restored; when, to my dismay, I saw them cut the ropes in the bow, and soon disappear astern in the fog. Another boat was broken down by persons rushing at the davits, and many were precipitated into the sea and drowned. This occurred while I had been engaged in getting the starboard guard boat ready, and placed the second officer in charge, when the same fearful scene as with the first boat was being enacted—men leaping from the top of the rail twenty feet, pushing and maiming those who were in the boat.”

Another boat was hanging by one tackle but Luce related that “a rush was made for her also, and some fifteen got in, and cut the tackle, and were soon out of sight. I found that not a seaman was left on board, or carpenter, and we were without any tools to assist us in building a raft, as our only hope. The only officer left was Mr. Dorian, the third mate, who aided me, with the assistance of many of the passengers, who deserve great praise for their coolness and energy in doing all in their power up to the very latest moment before the ship sank … we had succeeded in getting the fore and main yard and two top gallant yards overboard, and such other small spars and materials as we could collect, when I was fully convinced that the ship must go down in a very short time, and not a moment was to be lost in getting the spars lashed together to form a raft, to do which it became necessary to get the lifeboat – our only remaining boat – into the water. This being accomplished, I saw Mr. Dorian, the chief officer of the boat, taking care to keep the oars on board to prevent them from leaving the ship, hoping still to get most of the women and children in this boat at last. They had made considerable progress in collecting the spars, when an alarm was given that the ship was sinking, and the boat was shoved off without oars or anything to help themselves with, and when the ship sank the boat had got clear”. 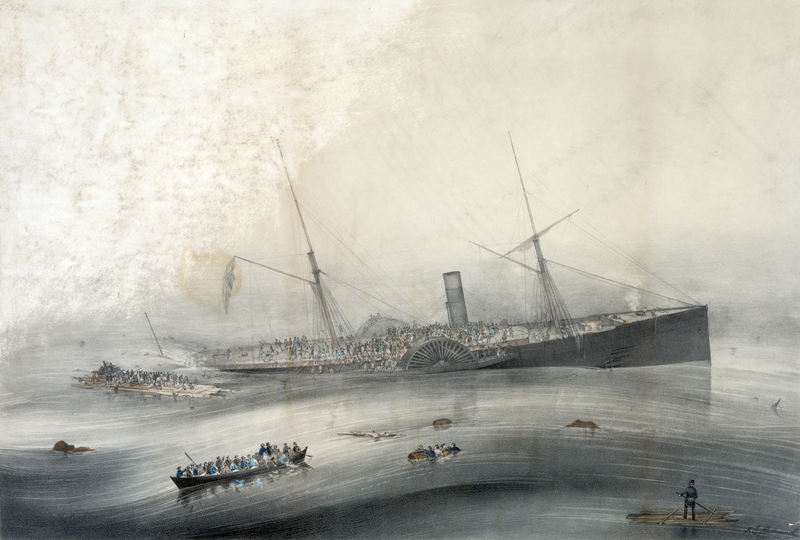 Two of the six lifeboats that left Arctic safely reached Newfoundland safely, and another was picked by a passing steamer which also rescued the few survivors on the rafts. Among these was Captain Luce, who had regained the surface after initially going down with the ship, though he lost hold of his own small son whom he held in his arms. After enduring appalling privations Luce and a few other survivors were rescued after clinging to pieces of wreckage for two days.  One of these survivors was a Frenchman lost by the Vesta. The other three boats disappeared without trace. 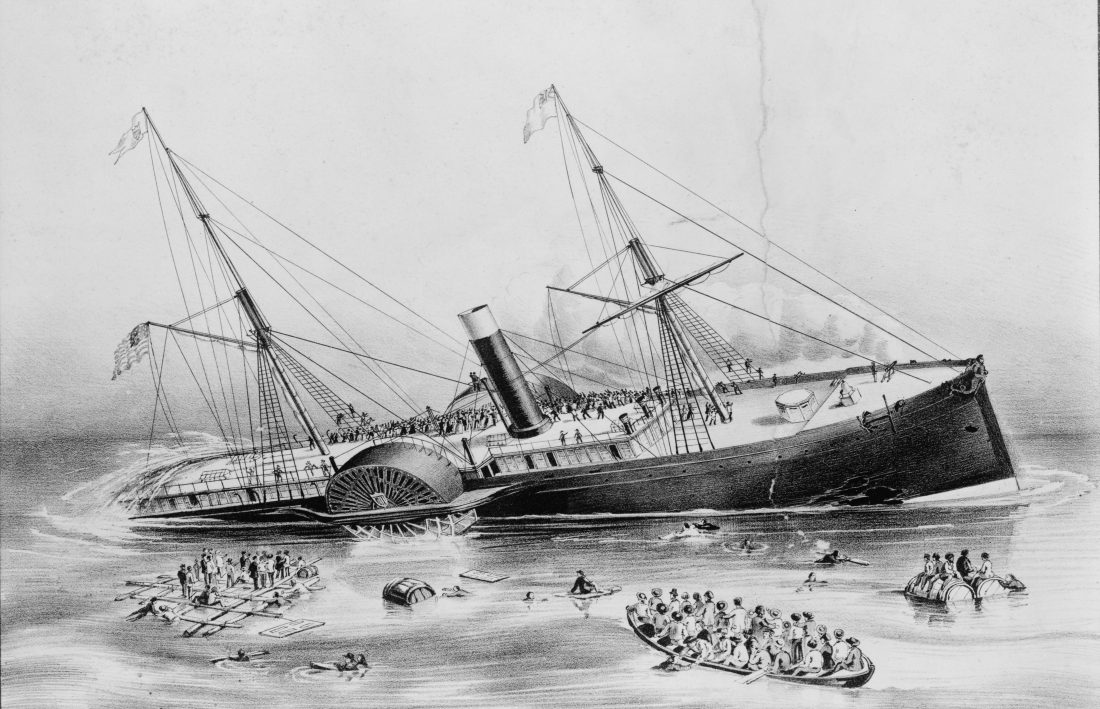 Another contemporary impression of the disaster

The final death-toll was 283. All the women and children on board the Arctic perished and the 85 survivors consisted of 61 of the crew and 24 male passengers.  Edward Collins’ own wife and children died, as did six members of the Brown family, whose bank, Brown Brothers, had helped to finance the Collins Line. Scandalous as the circumstances were, no official enquiry was ever held into the disaster – had it been, the lesson about the shortage of lifeboats would, once more, have been apparent. Nobody was held accountable.

The Collins Line disasters were not at an end. Less than two years later, in January 1856, the Arctic’s sister Paciifc left Liverpool with 45 passengers and 141 crew. She was never seen again and no trace of her was ever found. Various theories were put forward as to the cause of her loss and over the years various messages in bottles purported to have been thrown into the sea by desperate passengers in her final hours. All appear to have been cruel hoaxes. 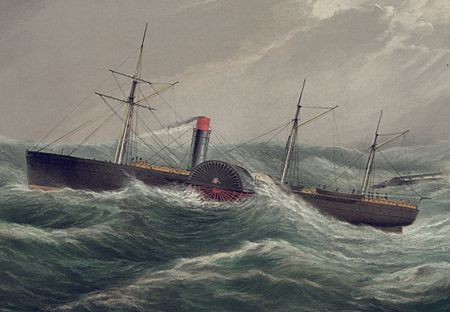 The SS Pacific – lost without trace

The Collins Line limped on for another two years and was finally declared bankrupt in 1858.It was a sad end to what could have been a noble endeavour had more attention been paid to the  to the value  of human life. There was nothing high-tech about lifeboats. The ship-owners just had to care enough to pay for them.