The wreck of the monitor Rusalka 1893

In a recent blog  I recounted the story of the loss of the Dutch monitor Adder in 1882 (Click here to read it if you missed it.). The lesson of this tragedy was that it was folly to send low-freeboard vessels suited to use in sheltered coastal waters out into the open sea. The lesson was however not widely learned and in 1893 the Imperial Russian Navy was to lose a generally similar vessel, of the same vintage, the Rusalka, in generally similar circumstances. As in the case of the Adder, the tragedy was wholly preventable.

In 1864, apparently impressed by the performance of the then revolutionary Monitor-type vessels in the US Navy, the Russian Admiralty Board ordered construction of two large and thickly-armoured  Charodeika-class units suitable for service in the Baltic. By the standards of the time these were heavily-armed vessels, carrying their armament in two turrets, their most powerful weapons being 15” muzzle-loaders of the American “Rodman” type, which had proved their worth in US service. The vessels were constructed at St. Petersburg and were to spend their careers in the Baltic Fleet. The size of the crews – some 184 men normally – seems enormous for a vessel of this size and the accommodation must have been cramped in the extreme! The second unit of the class was named Rusalka (Mermaid). She was launched in 1867 and entered service in 1869. Her characteristics were as below: 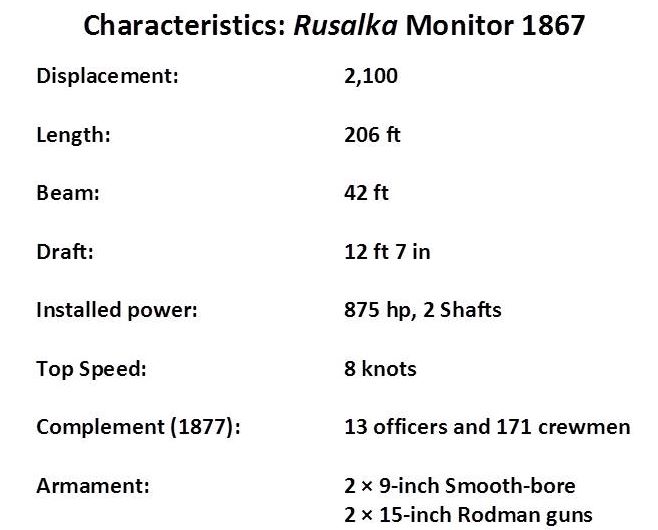 Though apparently designed with open-sea service in mind these ships’ decks were often awash in any sort of moderate sea since they had a freeboard of only two feet. They also rolled heavily and manoeuvred badly, often not responding to the ship’s wheel until 20 degrees of rudder was applied. They were restricted to training roles and, apart from hitting an uncharted rock without damage in 1869, the Rusalka had an uneventful career for over two decades. Given that she was obsolescent when commissioned it is surprising that she was re-boilered in 1878 and 1891 and that her armament was upgraded. She was reclassified as a coast-defence ironclad in 1892.

On the morning of September 7th 1893 the Rusalka departed from Reval (now Tallinn) in Estonia to sail due north across the Gulf of Finland to Helsingfors (now Helsinki) in Finland. It should be noted that both Estonia and Finland were then ruled by Russia. The distance across open sea was some 55 miles and the Rusalka was escorted by a Rendell-type gunboat Tucha. In reasonable weather conditions the passage should have been a fast and easy one of six or eight hours.

The weather did however deteriorate, and the ships lost contact in gale-force winds and rain. The Tucha arrived safely at Helsingfors in mid-afternoon but the Rusalka did not follow. A search was initiated immediately and two days later wreckage was washed ashore on the Finnish coast, including a lifeboat with one dead seaman. The vessel had 177 men on board but this was the only body recovered. Fifteen ships were engaged, fruitlessly, in the search for the Rusalka, continuing for over a month and only being suspended in Mid-October due to the first winter storms. The search was resumed in the middle of the following year, including observation from a balloon towed by one of the ships involved – and all again without success. 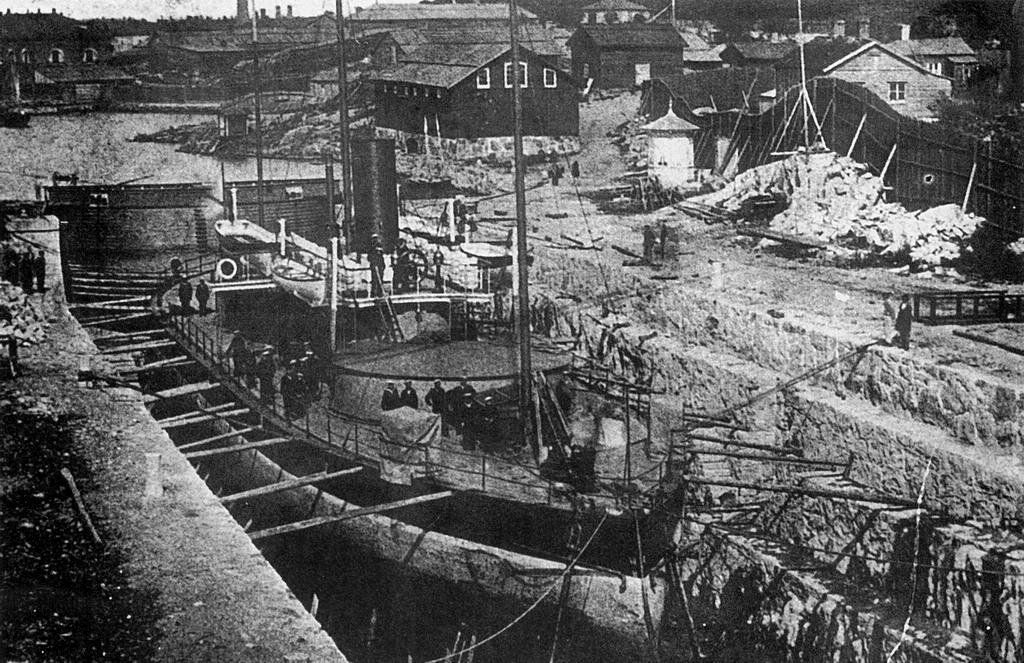 Before the disaster: Rusalka in drydock 1890

The inevitable enquiry followed, concluding that either the Rusalka’s steering gear had failed – and it appears to have been problematic at the best of times – or shipping of water had caused engine failure. In either case the vessel could have been unable to maintain a head-on bearing into the waves. Once parallel to them flooding would be likely and her small reserve of buoyancy would be overwhelmed. The similarities with the loss of the Netherlands’ Navy’s Adder eleven years before are very obvious – a low-freeboard vessel setting out for open waters in sea conditions which represented a clear risk to her survivability.

The Rusalka was to remain undiscovered until 2003 when an expedition mounted by the Estonian Maritime Museum located her in 243 feet of water sixteen miles south of her destination, now known as Helsinki.  The wreck is in a near-vertical position. The Rusalka appears to have plunged, bow first, directly downward into the muddy seabed. The stern of the vessel rises 108 feet (almost half her length) above the mud. It appears that she is draped with snagged fishing nets. The after turret seems to have torn free. The hull now stands, like a gravestone, over the last resting place of some 170 men. 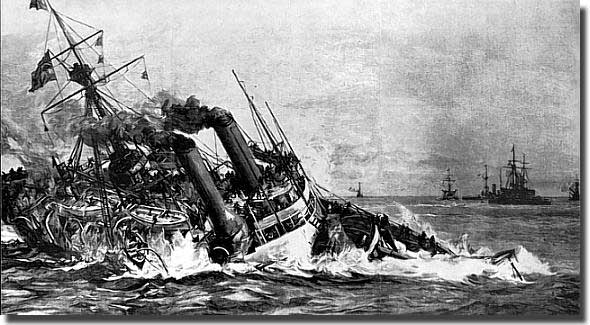 What is probably the only other large wreck which stands vertically is of a ship which was lost only three months before the Rusalka. This was the Royal Navy’s HMS Victoria, which was sunk when rammed by HMS Camperdown off Lebanese Tripoli on June 22nd 1893. But that’s another story!