Though the Revolutionary and Napoleonic Wars involved some two decades of continuous conflict, in which control of the sea was a vital consideration for Britain, many of hundreds of Royal Navy vessels involved were never exposed to direct combat with the enemy. Bad weather was however a constant hazard, especially in this era when modern aids to navigation and communication did not yet exist and when a vessel under sail did not have the ability to propel herself clear of danger with the ease that steam power would shortly bring. In no case is this better illustrated than by a storm in 1811 in which two “74” ships of the line, HMS Defence, and HMS Hero, and a “98”, HMS St. George, and a myriad of smaller craft were lost in a single storm that raged across the entire North Sea. This article will concentrate of the wreck of HMS Hero. 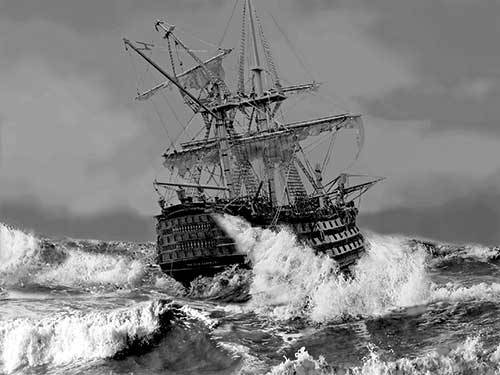 During this period, as in WW1 and WW2, Britain’s ability to remain in the fight depended very heavily on imports. In these later conflicts, the need to protect importation of food, oil, munitions and other supplies from the Americas made the Atlantic a major battle-ground.  In the late 18th and early 19th Century however, the most vital imports for maintenance of Britain’s war-making ability depended on “naval stores” – wood and related products imported from the Baltic region. This in due course led to the Baltic itself, and the exit from it, and the Southern North Sea, becoming areas of major strategic importance. Given the very limited capacity – by modern standards – of the merchant ships of the time, the numbers of vessels involved were quite immense. One convoy that arrived in Britain from the Baltic in September 1810 consisted of between five and six hundred merchantmen, the largest convoy up to that time. Such convoys needed protection against fast enemy privateers or naval frigates, thereby necessitating strong escort forces. Keeping track and control of such vast numbers of ships in the absence of radio and radar, not to mention weather-forecasting, was a nightmare for escort commanders. Losses to storms were high and even large vessels were at risk, such as the “74” ship-of-the-line HMS Minotaur, which was wrecked off the Dutch island of Texel in 1810. She had been driven into shallow water where she was beaten to destruction by the waves, with heavy loss of life. Worse was to follow – and in the same area – in the next year. 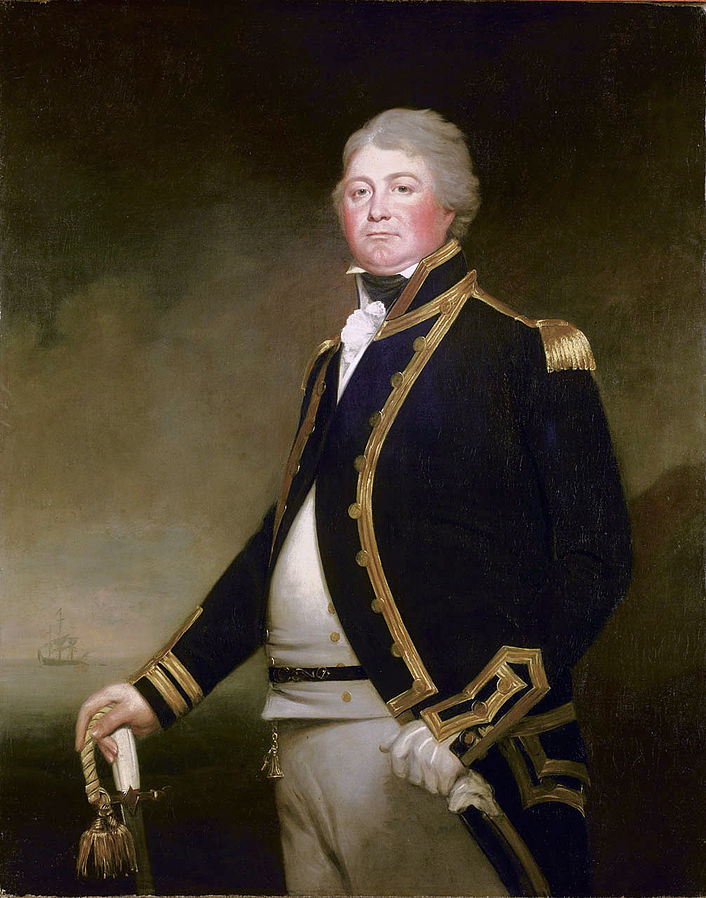 HMS Hero, a relatively new “74”, launched in 1803 had come under the command of Captain James Newman-Newman (1767 – 1811) – see portrait on right – in 1808. Newman had a distinguished career both as a junior officer and as a commander of frigates, and in 1810 his ship formed part of the squadron protecting Baltic commerce, including the enormous convoy alluded to above. 1811 saw similar work and in December of that year he was tasked with escorting a convoy from Gothenburg, in Southern Sweden, to London. Newman seems to have doubted the prudence of sending ships home in this season and apparently remarked “I cannot help thinking that we have been detained too long, and it is well if some of us do not share the fate of the Minotaur.”

Newman’s convoy sailed the December 18th, 1811, under escort of HMS Hero and the 18-gun sloops HMS Egeria and HMS Grasshopper. From the beginning, the weather was tempestuous and two days later the Egeria parted company, leaving the other two warships with some eighteen merchantmen. Due to the weather – and possibly due to a malfunctioning chronometer – exact fixing of location proved impossible and in mid-morning on December 24th Captain Newman, signalled to the Grasshopper that the vessels were now in the region of the so-called Silver Pit, an area of the North Sea some 30 miles east of Spurn Head on England’s North Sea Coast. On this assumption he confirmed that the convoy should proceed south- west.  The estimated position was dangerously wrong – the actual position was over 150 miles south of east and in shallow waters off the large Dutch island of Texel. 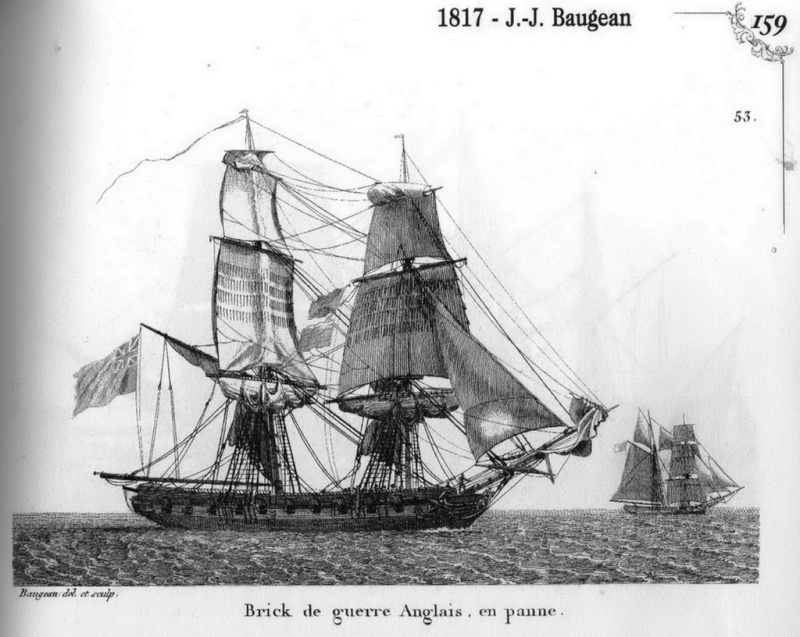 What happened in the following hours was testified to by the officers of the Grasshopper. With a following wind this sloop was making nine knots.  Four ships of the convoy were still in view but were soon lost sight of in the heavy squall of snow and sleet. Driving blindly ahead, the Grasshopper found herself in broken water in mid-afternoon. Shortly later she struck bottom, was lifted by the waves and was carried into deeper water, some six fathoms. A bow anchor was dropped but the vessel, at the end of the cable, struck bottom again shortly after and continued to pound in the coming hours.

It was now night, but through the darkness HMS Hero was identified – apparently at anchor also, and burning blue lights and firing guns. This ended during the night and when daylight dawned it was seen that both vessels were about six miles off Texel. Hero lay about a mile from Grasshopper but was by now a total wreck, lying on the seabed on her starboard side with the sea breaking over her. The ship’s company were crowded together on the poop and forecastle and at the mercy of the breaking waves which were sweeping many away. Though herself in dire straits – and in danger of breaking up – an attempt was made by the crew of the Grasshopper to reach the Hero, but the surf ran so high that it proved impossible.

The plight of the two ships was visible from shore and the only hope was to call on the Dutch enemy for assistance. The Hero accordingly hoisted a flag of truce and fired a gun. These signals were son answered and several vessels putting out from the Texel to her relief – a remarkable action, given that Britain and the French-dominated Netherlands were at war. Due to the tidal conditions, and the gale blowing, these boats were unable however to get closer than three miles. 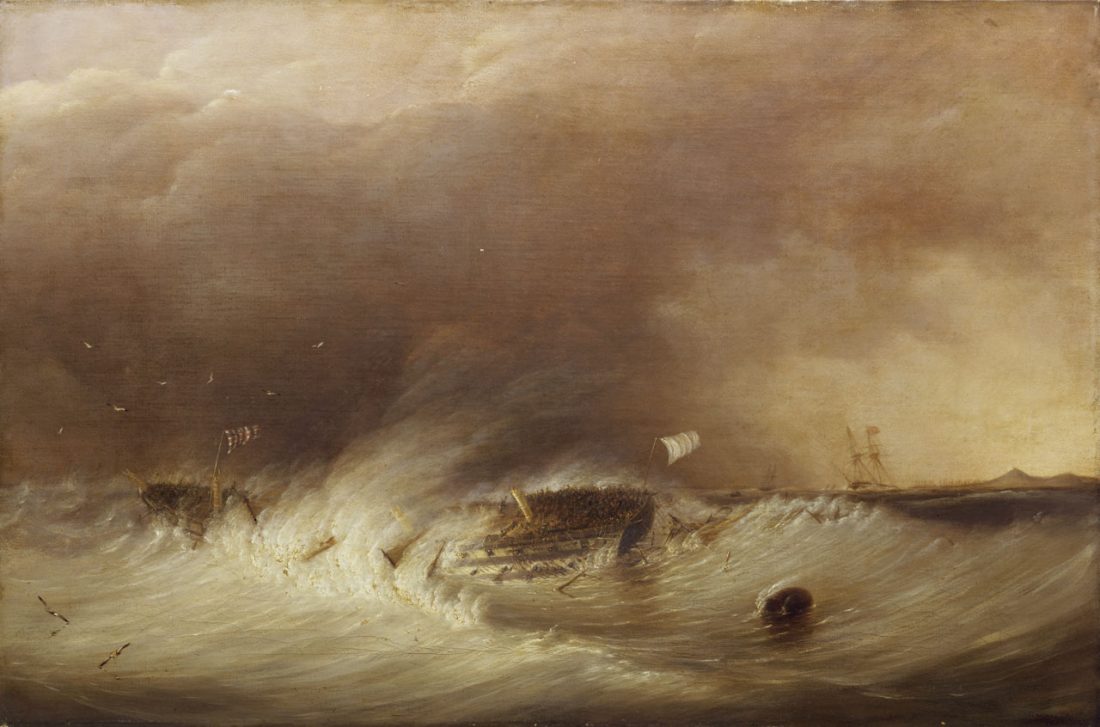 The anchored Grasshopper was still pounding on the bottom and her situation too was clearly desperate. With night coming on, and no let-up in the storm her Captain Fanshawe, with the support of his officers, decided that there was no option for saving the lives of the crew than surrendering to the Dutch. The cable was cut, and the Grasshopper managed to reach den Helder, just south of Texel, then, as now, the main Dutch naval base and surrendered. The Hero went to pieces during the night and in the morning not a vestige of her was to be seen. The Dutch forces made every effort to save the crew, but the weather was so stormy that it proved abortive. Only twelve men were rescued from a crew of about five hundred and Captain Newman-Newman was not among them. This was not the only loss for the convoy, for ten of its transports were also lost.

On the previous day a separate tragedy was played out some 230 miles to the north-east, where the two ships of the line, HMS St. George and HMS Defence were driven on to the Danish coast. Here also the loss of like was horrific. From a combined total of both crews, 1356 men, only 21 were saved.

The risks involved in Britain’s maintaining command of the sea in the Age of Fighting Sail have seldom been more terribly illustrated.