The spectacular life and death of Sabrina Island, 1811

The sloop HMS Sabrina was one of 24 similar vessels of the second batch of the “Cormorant” Class. Armed with no less than sixteen 24-pounder and eight 12-pounder carronades, these vessels packed an enormous punch for their 422 tons and small 120-man crews. Launched in 1805/06, these useful ship-rigged vessels were to provide valuable but unspectacular service throughout the remainder of the Napoleonic Wars.  The Sabrina saw service in the Mediterranean, in the West Indies and in the poorly-conceived and worse-executed Walcheren campaign of 1809. Her claim to fame did not however rest on battle-honours but rather on her discovery of the short-lived Sabrina Island  to which she gave her name. 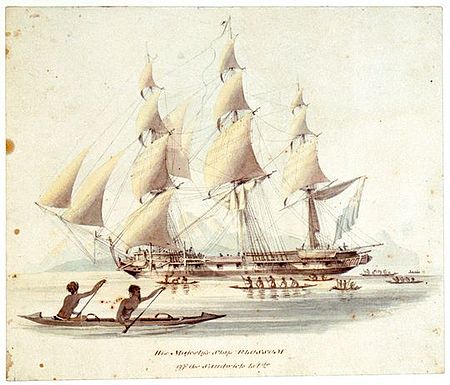 The Azores, the small Portuguese-held archipelago in the North Atlantic some 800 miles west of Portugal, are volcanic in origin. They are situated at the meeting point of three huge tectonic plates – the North American, the Eurasian and the African Plate. It is not surprising therefore that the area would be seismically and volcanically active and there have been some 28 known volcanic eruptions, of which 13 were submarine, since settlement of the islands commenced some six centuries ago. Early in 1811 seismic activity commenced on and around the island of São Miguel, the largest of the group, and this included tremors onshore which were powerful enough to destroy houses as well as massive release of gasses from the seabed. The climax came on 10th June when a submarine eruption raised a circular cone above the sea’s surface. This was some 700 yards in diameter and some 300 feet high. From an open ring at its centre smoke and debris vomited skywards. 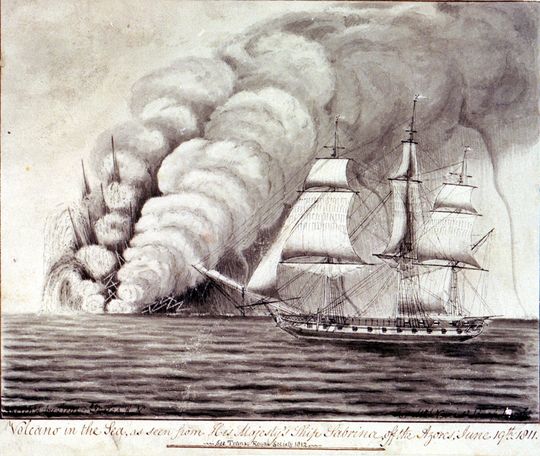 Unaware of these events, HMS Sabrina was cruising off the Azores under the command of Commander James Tillard. On 12th June, two days after the volcano’s appearance, the warship sighted rolling grey clouds on the horizon. Tillard assumed immediately that a naval battle was in progress and, if so, he wanted to be part of it. (One recalls the question asked by the bye-stander at the barroom brawl, “Is this a private fight, or can anybody join in?”). The Sabrina headed for the smoke and found to her surprise not a battle but a violently active volcano. Tillard was to write afterwards that ‘To give you an adequate idea of the scene by description is far beyond my powers” but he was fascinated by what he saw and stayed in the vicinity for the best part of a month. 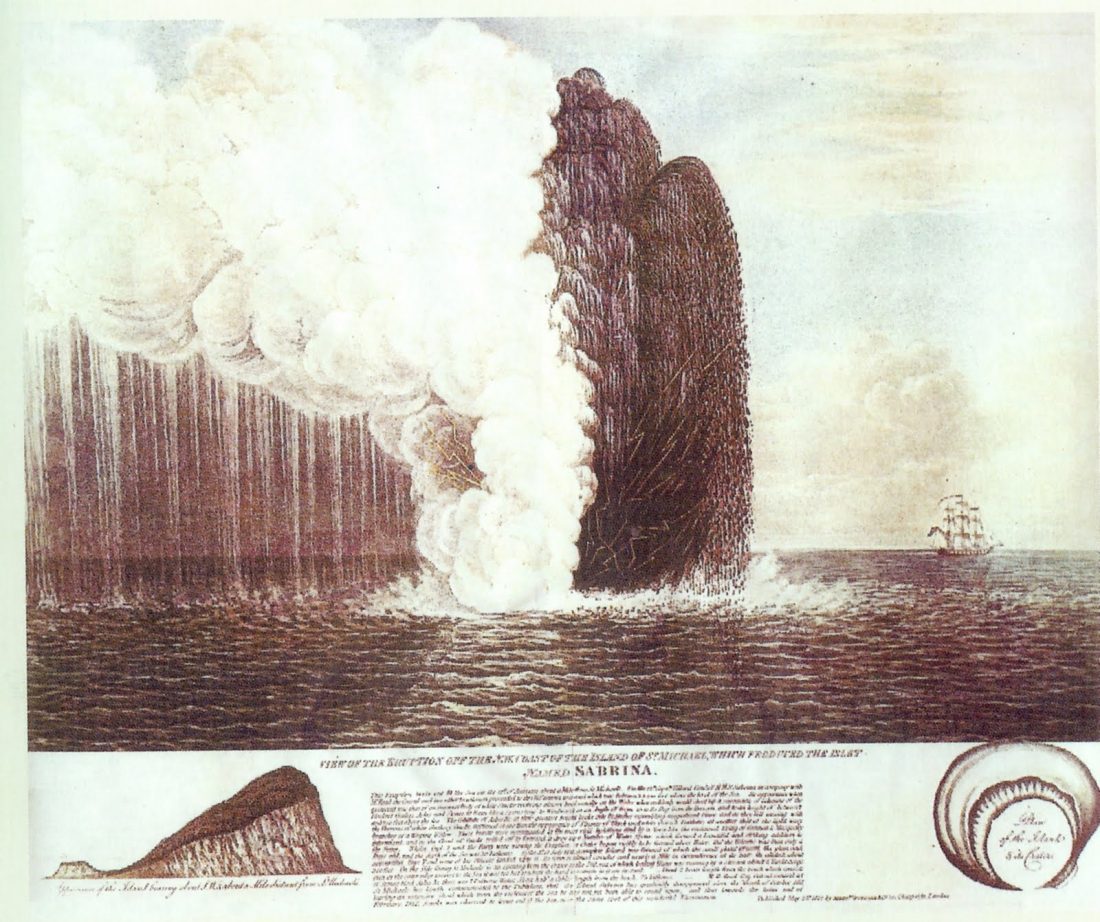 Contemporary illustration – the island rearing up, with gasses venting in the foreground

By 4th July that island was judged sufficiently stable and safe for a landing to be attempted. Tillard went ashore to find a desolate landscape of cinders and ash, with white smoke drifting in “the most fanciful manner imaginable” and volcanic material still being hurled upwards to sustain the island’s growth. Tremors continued, many with a noise “like the continued firing of cannon and musquetry intermixed”. Familiar no doubt with a captain’s responsibility to remain calm even while on an open quarterdeck in the heat of action, Tillard demonstrated admirable sang-froid while he was ashore. One tremor proved sufficient to collapse a cliff face only 50 yards from the point where he was holding an impromptu picnic with his party.  “So soon as our first consternation had a little subsided,” he wrote later, “we removed about ten or a dozen yards further from the edge of our cliff, and finished our dinner.”

When Tillard revisited the island some time later he found boiling water rushing from fissures. This did not deter him from raising a Union Flag and claiming the island as British, confirming it by a message lodged in a bottle at its base. He named this latest British possession “Sabrina Island” in honour of his ship.

Tillard’s claim of the island – within little more than a gunshot’s range from the island of São Miguel – had all the potential to cause a rift in British-Portuguese relations, all the more undesirable since both countries were allied at the time and prosecuting a vigorous war against France. A higher authority was however to settle what could have been an unwelcome diplomatic confrontation. When a British survey ship arrived on the scene a few months later all traces of Sabrina Island had disappeared as quickly as she had arrived.

Tillard wrote a full report on his findings to the Royal Society, but at this stage the tectonic mechanics involved were poorly understood. It was another half-century before the modern science of seismology would be born. Its unlikely origin was to be in an attempt to produce a massive siege-mortar – but that will be the subject of a future blog.

Suggestions and comment are welcome and all emails are replied to. Free short stories, available only to those on the list, are also made available at intervals.