In reading about the classic Age of Fighting Sail – roughly 1700 to 1830 – one is struck by the fact that encounters between the British and French navies had an almost monotonous aspect in that the British almost invariable won and the French almost invariably lost. This applied to single-ship actions and small-scale operations, no less than to fleet actions. In this period the French were to score one significant triumph – albeit one which had enormous strategic and historical implications. This was the Battle of the Virginia Capes in 1781 which led to the British Surrender to American and French forces at Yorktown and secured the independence of the United States. A much smaller action, which occurred at the very outset of Franco-British confrontation in this war, a duel between the frigates Belle Poule and HMS Arethusa was also to be a French triumph, and one that aroused enormous enthusiasm at the time. 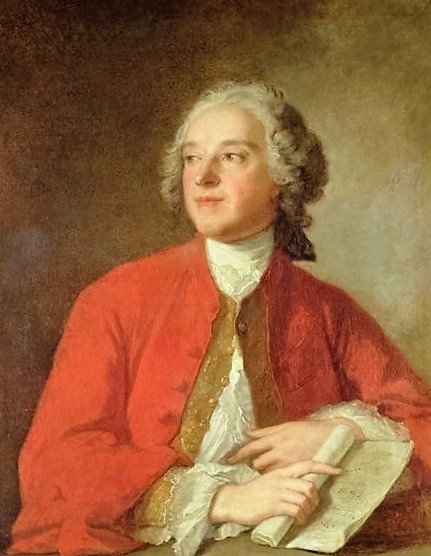 Covert French involvement in the American War was important almost from the very outset and it focussed on supply of arms and munitions to the rebel colonists. ( A key figure in this complex operation was the playwright Beaumarchais, the author of “The Marriage of Figaro”, soon to be turned into an opera by Mozart). It was only however in February 1778 that France and the United States signed a Treaty of Alliance.  Britain declared war on France on 17th March but hostilities were surprisingly slow in commencing. Not until June would the first battle take place and this was at sea.

In the run-up to the treaty signing a confrontation had occurred which, if handled with less tact on both sides, might have led to fighting starting earlier than actually happened. This was in January 1778 when a French Frigate, the Belle Poule, was carrying an American envoy back from France to America to report on progress of negotiations. This was Simeon Deane, brother of Silas Deane, one of the American commissioners in Paris. Two larger Royal Navy ships stopped the Belle Poule and  demanded to inspect her. Though he would be outnumbered and outgunned were it to come to a fight the French captain, Charles de Bernard de Marigny, answered: “I am the Belle Poule, frigate of the King of France; I sail from sea and I sail to sea. Vessels of the King, my master, never allow inspections”. The British apologised and the frigate was allowed to proceed, though she had later to turn back due to adverse weather. The Belle Poule was to meet the Royal Navy again and would fight in first Franco-British naval engagement of the war. 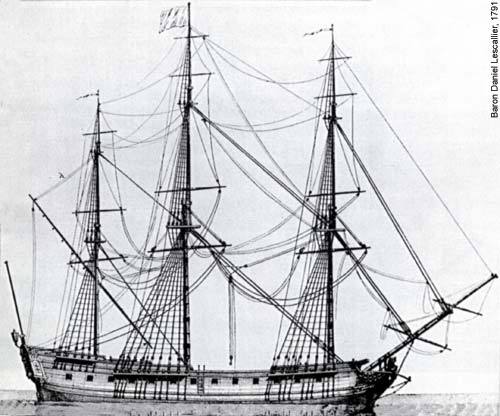 Entering service in  1767, the Belle Poule was notable for being the first French ship to receive copper plating on her hull to deter the marine growths which would reduce a ship’s speed appreciably. Thus equipped, she was well suited to hydrographic missions, which occupied her from 1772 to 1776. Of 1150 tons at full load, and 141-feet in length, she was a typical 30-gun frigate of the time, carrying twenty-six 12-pounder long guns and four 6-pounders. It is notable that at this stage the short-range but high-firepower carronade, which was in the near future to increase the offensive capability of frigates so dramatically, had not yet made its appearance.

In June 1778 a major British force was sent to watch the French base at Brest, in Brittany, thus initiating the long series of blockades that would continue with few interruptions in the wars that would occupy most of the years from 1778 to 1815. A major concern in 1778, as so often later, was to prevent a junction between the French Atlantic and Mediterranean Fleets. With 21 ships of the line, three frigates, and a characteristically aggressive orientation, Admiral Augustus Keppel (1725 – 1786), was well resourced for this mission. On 17th June a small French reconnaissance force, consisting of the Belle Poule, a similar frigate named the Licorne, and two smaller vessels, encountered the British force north of Brest. Keppel, unwilling to have his squadron’s exact whereabouts reported, ordered the French ships to be run down and captured. The Licorne was captured during the following night after a brief combat. 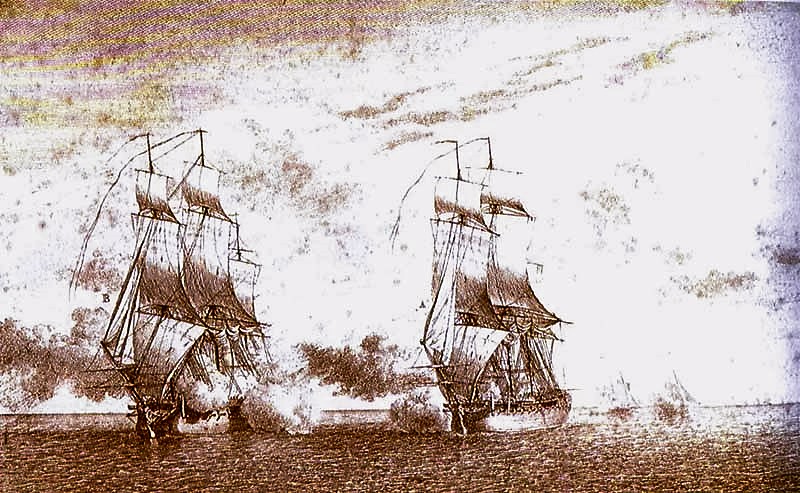 The Belle Poule, accompanied by a cutter named Le Courier, found herself meanwhile chased by the British frigate Arethusa, which was also in company with a cutter, in this case HMS Alert. The Arethusa was herself originally a French vessel which had entered service in 1758 and had been captured by the Royal Navy the following year. The Belle Poule’s captain, Jean de la Clocheterie (1741–1782), refused a British order to submit to Arethusa and was greeted by a shot across his bows. He responded with a full broadside. de la Clocheterie’s objective was however escape rather than capture of his opponent and – as was to be so characteristic of French commanders in the coming decades – concentrated his fire on the British ship’s masts, yards and rigging.

The two-hour battle that followed was a slogging match and the Arethusa had the worst of it. She lost her mainmast overboard and was unable to close again after a small wind-increase allowed the Belle Poule to escape despite her shot-rent sails. She had suffered 30 killed and de la Clocheterie was among the 72 wounded. The Arethusa had endured a worse pounding, with 44 of her 198-man crew dead or injured. The arrival of Keppel’s force was her salvation however. She managed to cut away her wreckage, to rig a jury mast and to crawl away with Keppel’s squadron to fight another day. 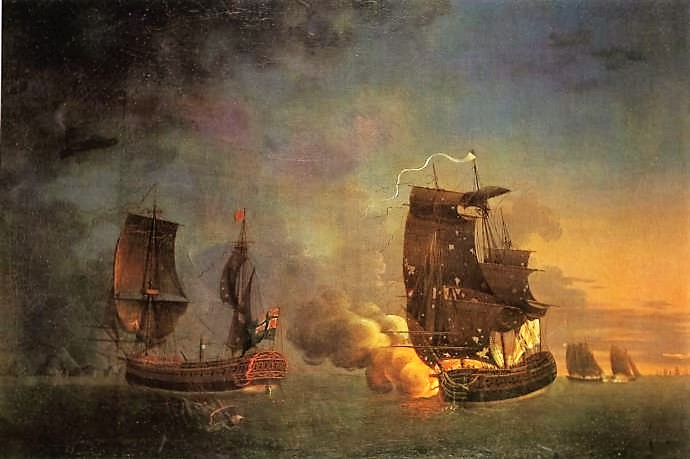 The battle as painted by August-Louis de Rossel de Cercy
Arethusa on the left, Belle Poule still pounding her 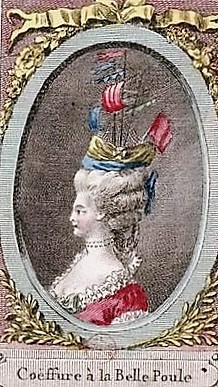 As this was the first naval action of the war the Belle Poule’s stalwart performance was greeted with delight in France – not least, once suspects unkindly, since French victories at sea were so infrequent. King Louis XVI promoted de la Clocheterie, whose formal rank had been Lieutenant, to Captain and received him at court. Here he was to play a hand of the card game piquet with Louis and was shocked when the King remarked during it that he was “unfaithful to his ship.” Louis then explained that “You are sure to abandon the Belle Poule to be captain of a ship with 64 guns” and in this way de la Clocheterie learned that he was being given command of the newly constructed Triton.

A bizarre aspect of the admiration of the action against Arethusa was that ladies appeared at court functions with their hair dressed in a style known as “Belle Poule”. This involved mounting a small model of the ship at the top of a complicated coiffure. One wonders indeed how often, or by how many, this creation was actually worn. The writer of this article, Antoine Vanner, does however remember being amazed as a boy when a court lady was shown wearing it in the spectacular 1935 Ronald Coleman film of “A Tale of Two Cities” which was re-issued around 1957. Even with Hollywood’s resources available, this coiffure must have taken hours to construct, and scarcely less to remove – an indication of the insane levels of hedonistic expenditure in the near-bankrupt France that was already sliding headlong towards Revolution.

de la Clocheterie’s later career was a short one. He performed well at two further engagements but was killed, commanding L’Hercule, at the Battle of the Saintes, in April 1782, the major British naval victory of the war, but a useless one, as the outcome of the conflict had already been settled by the French victory at the Virginia Capes eight months earlier.

And the Belle Poule herself? Like the Arethusa before her she was captured by the Royal Navy in 1780 and saw active service under British colours until the end of the war. She was broken up in 1796.