The revolt that led to the creation of modern Belgium as an independent state was the background to an act of insane heroism by a young Dutch naval officer, Jan van Speijk, whose (alleged) last words were to become an expression still in use today. This is his story.

The Netherlands and Belgium are today two separate nations, and have indeed had separate existences, in one form or another, for most of the time since the late sixteenth century. Up until 1806, the Netherlands had a complex republican form of government, though allowing however a hereditary role to Princes of the House of Orange. The nation fell under French control in 1795 and in 1806 it became the Kingdom of the Netherlands, with the Emperor Napoleon’s younger brother Louis installed as King. What is today Belgium (allowing for frontier adjustments) was ruled as a province of the Hapsburg Empire from the seventeenth century until the beginning of the French Revolutionary Wars. 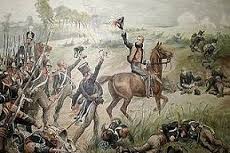 As Napoleon’s power waned, and as he was sent in exile to Elba, the Great Powers of Europe supported creation of a single unified state, combining both regions, and henceforth to be known as “The Kingdom of the Netherlands.”  Its sovereign was to be the current Prince of Orange, who took the title of King William I and who was also made ruler, under the title of Grand Duke, of the separate state of Luxembourg. The new Kingdom was functioning when Napoleon came back from Elba during “The 100 days” in 1815, and Dutch-Belgian forces were to fight against him at Waterloo. 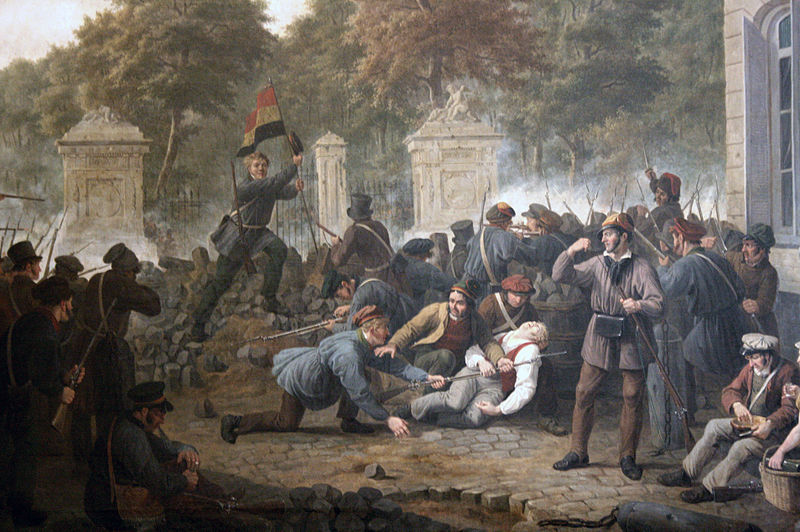 For the next 15 years the northern, Dutch, and the southern, Belgian, parts of the kingdom lived uneasily together. Though adherents of both religions lived in all areas, the north was predominantly Protestant and the south predominantly Catholic. The situation was further complicated by the southern provinces containing both French-speaking Walloon and Dutch-speaking Flemish communities.  Tensions increased and in the south resentment grew against what was seen as the Protestant hegemony by the House of Orange and its adherents. This discontent exploded in outright rebellion in Belgium in 1830. King William attempted to restore order but was hampered by mass desertion of troops hailing from the southern provinces. Unable to restore order, despite bloody street-fighting in Brussels and elsewhere, William withdrew his forces, though he maintained a blockade of Antwerp, and appealed to the Great Powers to resolve the problem. This resulted in the London Conference of European powers which recognised Belgium as an independent country. Prince Leopold of Saxe-Coburg was installed as “King of the Belgians”. 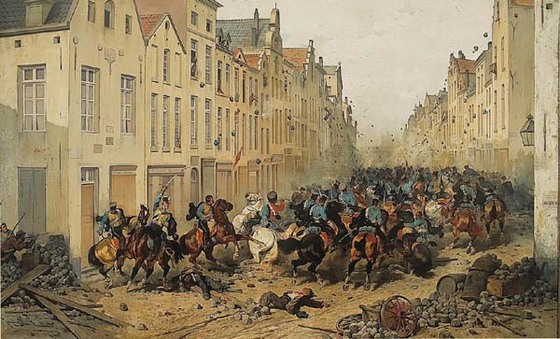 Unhappy with this outcome, King William of the now truncated Netherlands – essentially the territory it consists of today – was to oppose the separation, culminating in an unsuccessful invasion of Belgium known as De Tiendagse Veldtocht (“The Ten Days’ Campaign”) which lasted from the 2nd to the 12th of August 1831.  Despite initial successes, French intervention forced the Dutch to agree to an indefinite armistice. Faced with such opposition, William had no option but to withdraw, humiliated and smarting, but it was not until 1839 the Netherlands accepted Belgian independence by signing the Treaty of London. As one of its signatories, it was in line with the terms of this treaty that Great Britain entered World War I when Belgium was invaded by Germany in 1914. 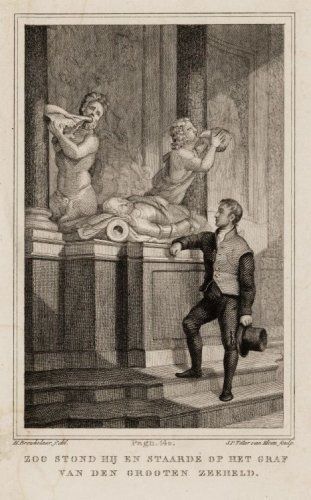 Probably only one incident from this complex series of events is widely remembered in the Netherlands today. This was the exploit of the young Dutch naval lieutenant, Jan van Speijk (pronounced like “Spike” in English), who achieved immortality at Antwerp in February 1831. Dutch naval forces were maintaining a blockade of this important port – then as now, one of the largest in Europe, as it functioned as a commercial gateway to Germany. Van Speijk was in command of a small gunboat, one of many engaged in blockade duty, a more difficult task then than nowadays as many mouths of the Scheldt Delta, at the head of which Antwerp lies, were then open but which have since been closed off by dams.

Van Speijk’s background seems almost too good to be true for a popular hero. Born in Amsterdam in 1802, his parents died when he was a baby and he was brought up in an orphanage and subsequently trained as a tailor. Such a mundane career did not attract him and he instead joined the Royal Netherlands Navy in 1820. Thereafter he was to serve with distinction in the Dutch East Indies in the Boni Campaign of 1825 in the South Celebes. By 1830 he was a lieutenant – a very impressive achievement for a man who had started with such poor prospects. As the  revolt in Belgium grew he was in command of Kanonneerboot  Nummer 2 (Gunboat Number 2), a small sailing craft armed with a single cannon. On October 27th van Speijk performed so effectively in a bombardment of Antwerp that he was awarded a decoration. 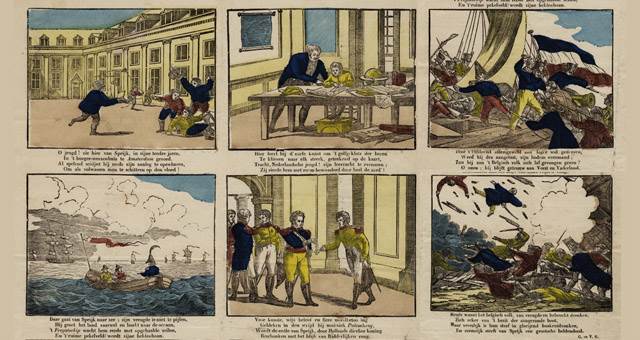 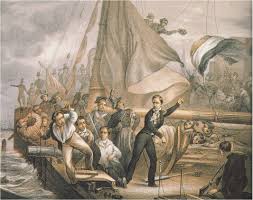 What van Speijk feared could happen, does happen- the mob storms the gunboat,
the ship’s boy knows what’s coming and jumps overboard. van Speijk himself goes below

The crunch came on February 5th 1831. Caught in a north-west gale, and with a dragging anchor, van Speijk’s gunboat was thrown up on the shore. A Belgian mob surged on board. What followed was the stuff of legend, the more so since few survived to tell a coherent story. Unable to prevent the vessel’s capture, van Speijk went below and with the reported words of “Ik ga liever de lucht in” (I’d prefer to be blown up) he either fired his pistol or dropped his cigar into a barrel of gunpowder. 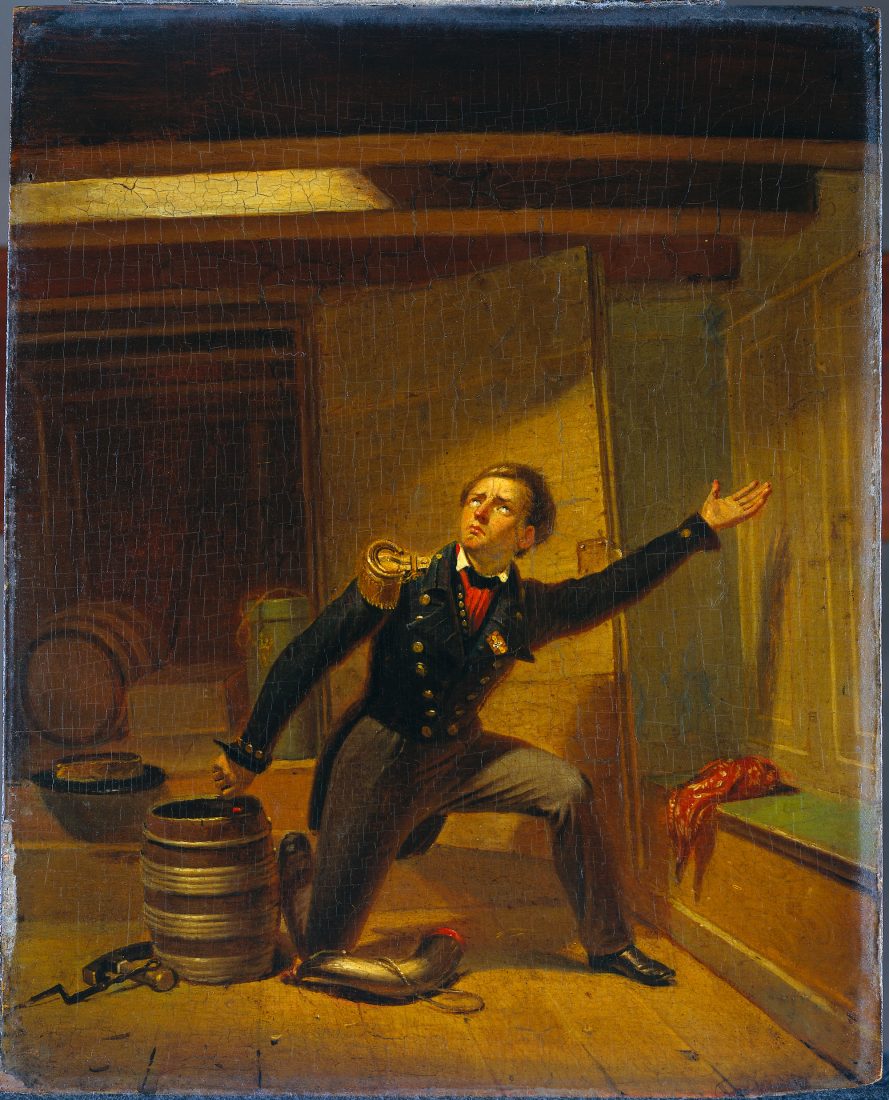 The resulting explosion wrecked the gunboat and killed van Speijk himself and 27 of his crew of 30 as well as an unknown number of Belgians. Since there were only two survivors, one of whom was boy who, seeing what was intended,  had jumped overboard before the explosion, it is not quite sure how van Speijk’s final words were recorded, or indeed if he ever spoke them. 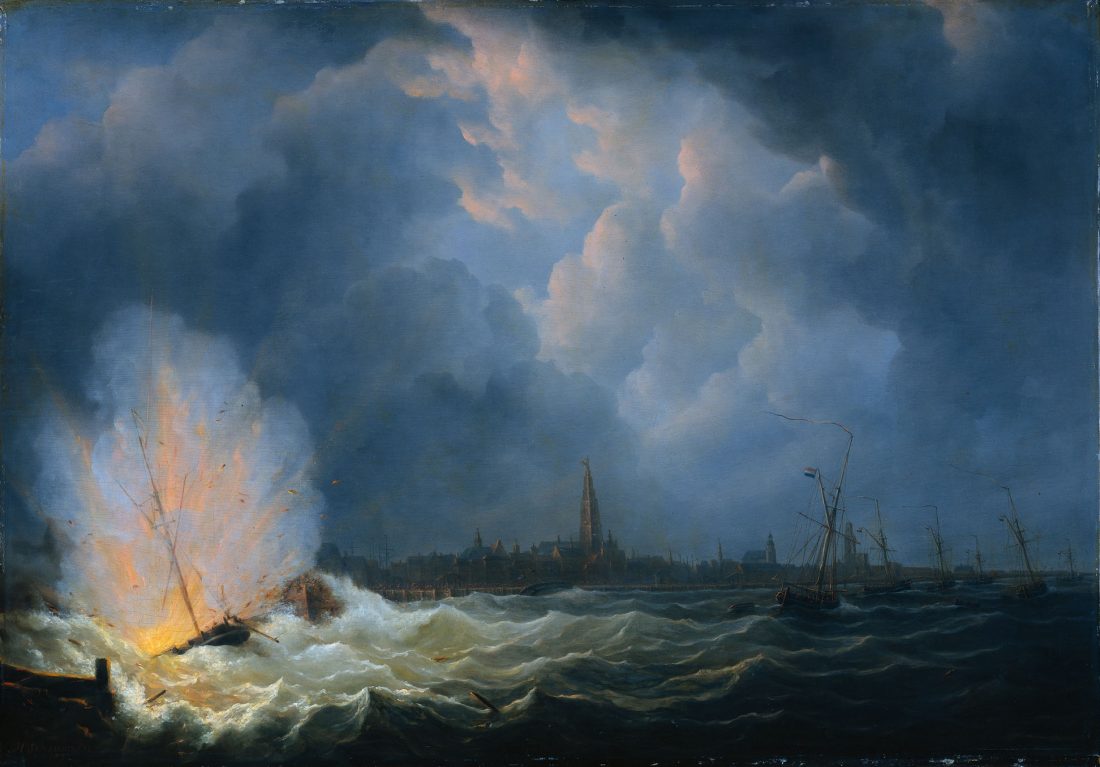 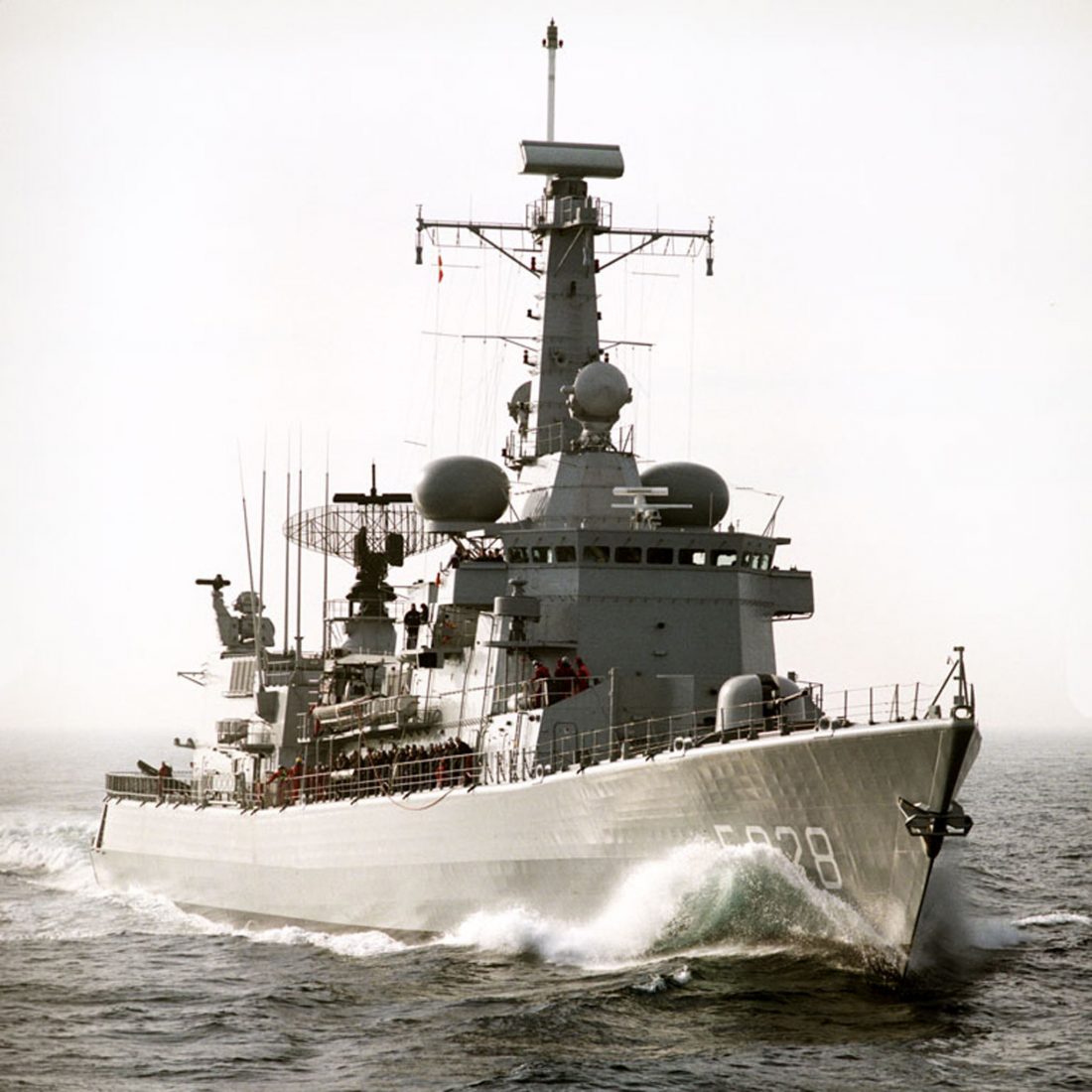 Van Speijk was immediately hailed as a national hero in the Netherlands, the admiration being led by King William himself, who within a week of his death issued an order that there should always be a ship called van Speijk in the Royal Netherlands Navy. This order has been honoured ever since and the current van Speijk, the eighth, is a Karel Doorman-class frigate launched in 1995.  Van Speijk’s remains were buried with pomp in Amsterdam with the King present and his life was thereafter the subject of poems, paintings and even inspirational nineteenth-century versions of comic strips.