In the Dawn of Naval Aviation –

I am lucky to live near Britain’s Fleet Arm Museum at Yeovilton, Somerset, a splendid collection not only of naval aircraft but of models of aircraft carriers from their earliest days. A visit (a modestly-priced ticket gives unlimited access for a year) is a delight, enhanced by the way in which exhibits are organised by theme to give a good idea of how naval aviation has developed since just before World War I. An entire series of blogs could be inspired by the museum – which contains a large number of aircraft – but  I want to concentrate here on two carriers which typify the growth in sophistication of the Royal Navy’s approach to delivering air power from the sea from 1915 to 1918. This is illustrated by reference to two superb models, one of the seaplane carrier HMS Ark Royal and the other of the first continuous-flight deck carrier, HMS Argus. 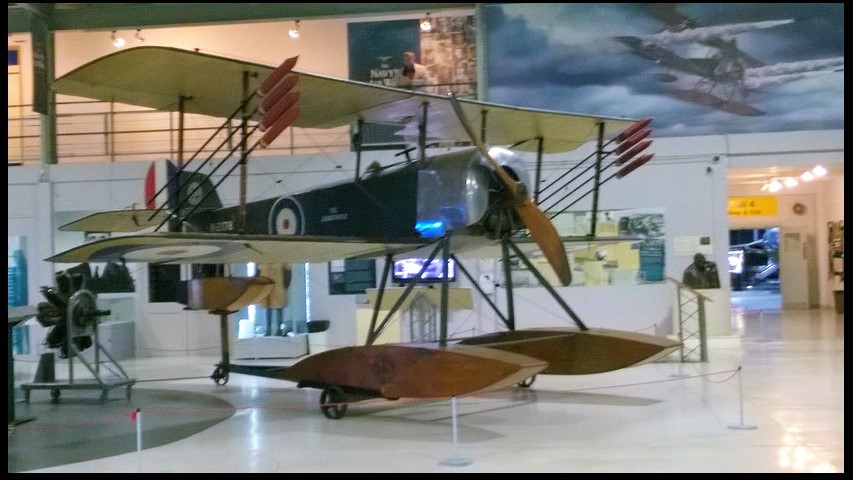 The value of aircraft for maritime reconnaissance had been recognised by the Royal Navy before war broke out in 1914 but carrying aircraft to launching points, and recovering them later represented a major challenge. Floatplanes represented the most immediate solution, carried by converted mail-packet steamers, which had the advantage of speed, and from which they could be dropped overboard by crane. They would take off from the water and land on it afterwards, at the end of the mission, being lifted back on board by crane. It was obvious that rough sea conditions would make such operations dangerous, and often impossible, but the system still proved of utility, especially in the calmer waters of the Mediterranean. One such aircraft was however launched – and subsequently recovered safely – during the Battle of Jutland in 1916, although it had no influence on the outcome of the engagement. 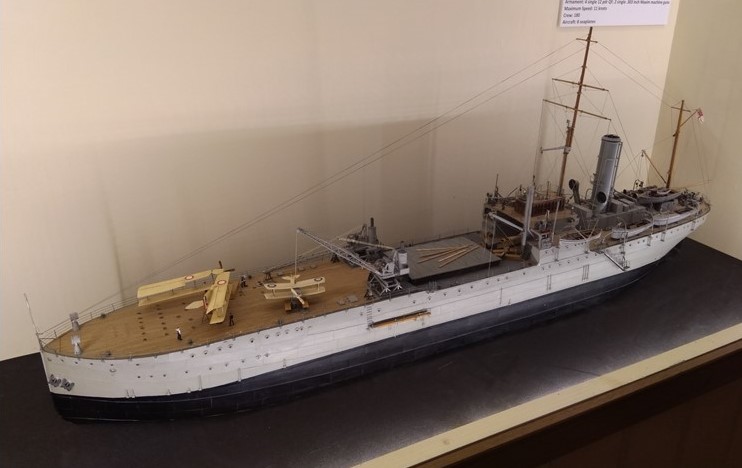 Pre-war experiments had led the Royal Navy to order a specially-designed floatplane carrier, HMS Ark Royal, in 1913, taking over a civilian vessel on which construction had barely commenced and modifying her in view of current thinking. Of 7000 tons and 366-feet long, she was equipped with an open deck forward on which aircraft could be ranged or maintained, two steam cranes amidships and limited hangarage aft, as well as substantial workshop and storage facilities. She carried up to eight floatplanes and a third of her 180-man complement were aviation-related personnel.  She typically carried carry up to some ten and serve as a base for may more. 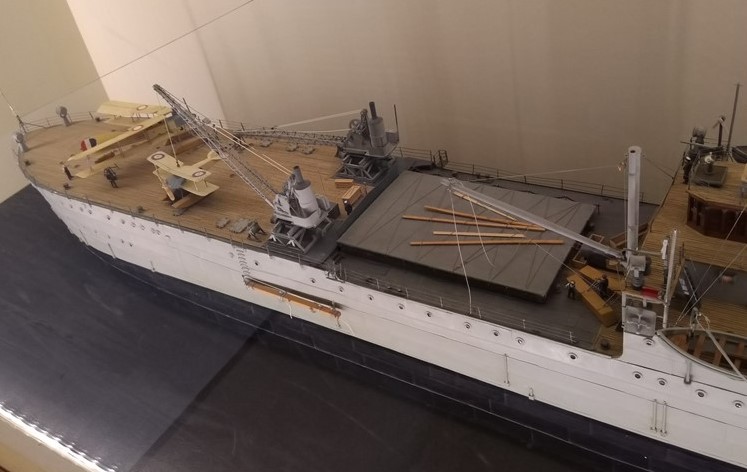 HMS Ark Royal’s slow speed – eleven knots maximum – made her unsuitable for service in fleet operations but her support capabilities made her an ideal depot ship for operations in the Eastern Mediterranean. She played an especially valuable role in the Gallipoli campaign. She continued to see active service after the war ended, supporting operations against the Bolsheviks in the Black Sea and later against insurgents in Somaliland. In the 1930s the Ark Royal was use for experiments and training for catapult-launched aircraft, yielding up her name to a new carrier in 1934 and serving on as HMS Pegasus took on valuable transport and training tasks in World War II. She was stricken in 1946. 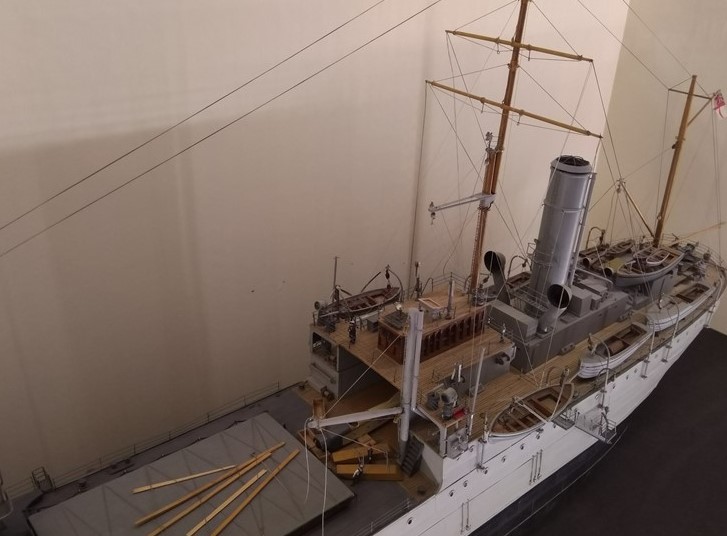 The FAA Museum’s model shows the Ark Royal as she would have been in the later years of World War I with a Short 184 floatplane on the foredeck and a Sopwith Baby ready to be dropped overboard by one of the cranes. The entrance to the hanger is visible, as well as the large hatchway cover giving access to the facilities below. Humble and mundane though her appearance may have been, Argus’s service was long, active and valuable.

If HMS Ark Royal represented an initial step, HMS Argus represented the future – the first aircraft carrier with a fully uninterrupted flight deck. Her design built on experiments with separate fore and aft flying decks, interrupted by central superstructure, on the converted light battlecruiser HMS Furious (herself later converted to have a full flight deck). A carrier such as HMS Argus provided a floating aerodrome on which wheeled aircraft could land and take off, without the complications involved in dropping and retrieving floatplanes. The 15000-ton, 565- foot long HMS Argus was built on the hull of a passenger liner under construction in Britain for an Italian company when World War I broke out. She was acquired by the Navy in an incomplete state and reconfigured as a carrier with a flight deck, a large hanger beneath and two elevators to carry aircraft up and down.

Completion was delayed by investigation of how best to dispose of exhaust gasses – a problem eventually solved by venting at the stern with gasses driven out by electric fans. A further delay was occasioned by concerns about turbulence over the deck, and the resulting complications for aircraft landing on, should a superstructure rise above it. The final solution was to allow a wholly uninterrupted deck, with no superstructure rising above it. 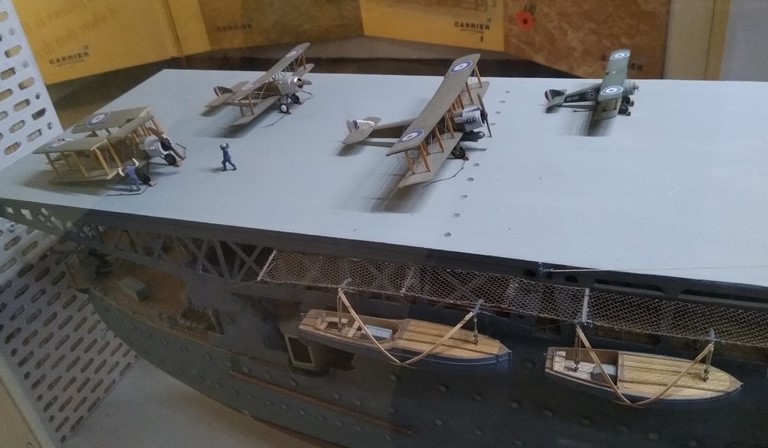 Sopwith Cuckoos, 11/2 Strutter and Pup being readied for flight

The bridge extended across the ship beneath the flight deck but the view was unavoidably impaired. A small retractable pilot house was therefor provided forward to facilitate more exact manoeuvring when entering or leaving harbour. The Royal Navy was to build no further carriers without an island structure on one side of the flight deck. The USS Langley was similarly devoid of an island and so too were several large Japanese carriers that played significant role in World War II.

HMS Argus became fully operational too late to participate actively in World War 1, though as it ended she was being considered for launching an attack on German naval bases. Though slow –20 knots maximum – she proved a valuable asset to the Royal Navy in the 1920s and 1930s, supporting development of operational procedures and tactical use of air power. Though unfitted for fleet service in World War II, she played a valuable role in transporting aircraft, including land-based fighters, to the beleaguered island of Malta, bringing them close enough to fly off before venturing too close to the island. HMS Argus was also used for deck-landing training until, by then essentially worn out, when was retired from service at sea in 1944 and scrapped two years later. 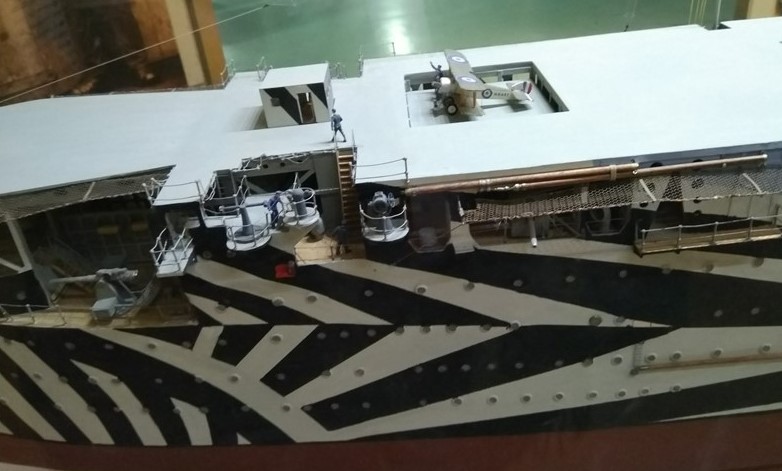 The FAA Museum model shows HMS Argus in the 1918/19 period. The starboard side is painted in peace-time grey but the port side in spectacular splinter-type wartime camouflage. Aircraft on deck include two Sopwith Cuckoo torpedo bombers, a Sopwith 11/2 Strutter and two Sopwith Pups, one being brought up from the hanger. The retractable pilot house can also be seen.

This article concentrates on only a small part of this magnificent museum. I hope that it has whetted your appetite for making a visit should you ever be in Britain’s West Country!