Skip to content
HMS Argyll and the Bell Rock Lighthouse, 1915

Between 1902 and 1908 a total of 34 armoured cruisers were built for the Royal Navy. Expensive ships, almost all in the 10000 to 16000-ton range, they were of comparable displacement to contemporary pre-dreadnought battleships. Fast and, except in the case of the later classes, very inadequately armed for their size, they were to prove one of the most unlucky type of ship ever to enter service. Of the 34, eleven were lost by enemy action or by internal explosion while at anchor and two were wrecked. It is with one of the latter, HMS Argyll, which was lost on 28th October 1915, that this article deals. 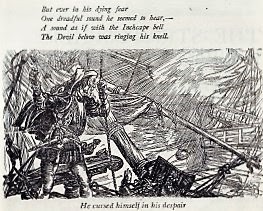 The “Bell Rock” – also called the “Inchcape Rock” – is a reef that lies some 11 miles of Scotland’s east coast, roughly in line with Dundee. Set as it is in open water, wave lashed, and below surface level for much of the time, it has represented a major hazard to shipping through human history. It got the name “Bell Rock” because of an attempt in medieval times to mount a warning bell there. This bell was quickly stolen by a pirate who, as recounted in Robert Southey’s poem “The Inchcape most appropriately got his come-uppance by being later wrecked on the same rock himself:

But even in his dying fear,

One dreadful sound could the Rover hear;

A sound as if with the Inchcape Bell,

The Devil below was ringing his knell.

By the early 19th Century, with maritime traffic increasing, the Bell Rock was claiming an average of six ships a year. The last straw was however the wreck on it of the 64-gun ship-of-the -line HMS York in 1803. There were no survivors. Construction of a lighthouse was now recognised as essential but the technical challenges were immense.  The engineer Robert Stevenson (1772 – 1850) proposed a design based on interlocking stone blocks, a technique that had already been proven on the Eddystone Lighthouse in the middle of the previous century. The greatest challenge was not however the tower – subjected to powerful waves as it would be – but provision of a firm foundation, essentially a level platform constructed on the reef itself.

Work started in 1807 and what followed was a four-year epic, with work severely restricted by tides that on occasion submerged the rock’s surface to twelve feet. The offshore activity only proceed during the summer months, and even then only with difficulty. Poor weather in the summer of 1808 allowed only 80 hours of work were completed. 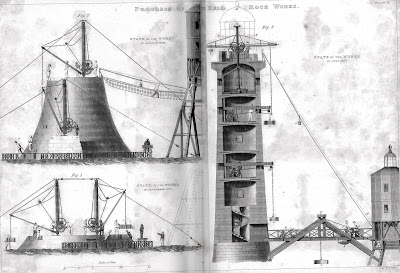 Note “Beacon House” partly visible at right, as base of operations 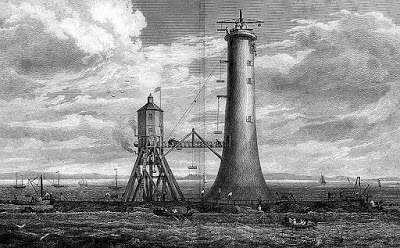 Nearing completion – the temporary “Beacon House” is on the left

To avoid time lost in shuttling workers to and fro Stevenson built a temporary wooden “Beacon House” on the rock and this served as both a base of operations and living quarters for fifteen men. As this structure (see illustrations) was also exposed to storms during the construction period, residence on it must have in itself have been a nightmare. During the winter months Stevenson kept his crews busy ashore, dressing the individual granite blocks needed for the tower. The total number required was some 2500 and all were drawn to the dockside by one of the unsung heroes of the project, a horse called Bassey.

The lighthouse came into service in 1810 and was to fulfil its purpose very effectively. Between then and 1914 only a single ship was lost on the rock, a steamer called the Rosecraig that ran aground during a fog in 1908, fortunately without loss of life.  With the onset of war however in 1914 orders were given for the light to be turned off to avoid its use as a navigation mark by German U-Boats and it was only with special permission that it could be switched on. As will be seen, the procedure put in place for this proved to be woefully inadequate. 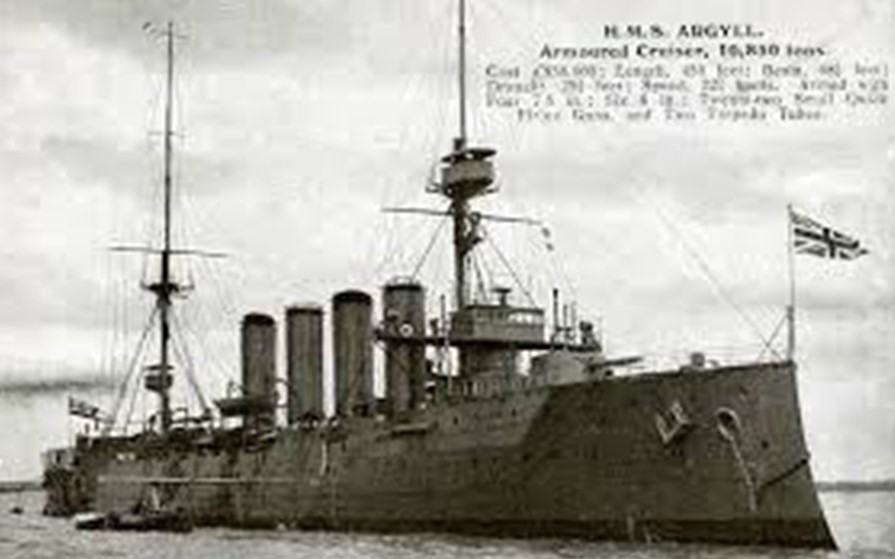 And now to HMS Argyll, one of the unfortunate breed of armoured cruisers, in this case of the six-ship Devonshire class. Completed in 1905, this 10850-ton, 475-ft long vessel was armed with four 7.5-inch (in four single mountings – bow and stern-chasers and one forward on each broadside) and six 6-inch guns and two 18-inch torpedo tubes. Her crew was over 650. She was assigned to duties with the Grand Fleet on outbreak of war in August 1914 and she was engaged in patrol work – essentially the “distant blockade” of Germany –  between the Shetland and Faroe Islands and the Norwegian Coast. She captured one German freighter in the first days of the war.

At the present time, and with the availability of radar and GS aids for even small craft, it is difficult to imagine just how blind – and how vulnerable – shipping was in low visibility in the early 20th Century. The fate of HMS Argyll is one instance. In the early hours of 28th October 1915, during stormy conditions, she was in the vicinity of the now-darkened Bell Rock and he signalled to shore to have the lighthouse illuminated. It seems incredible that there was however no radio on the lighthouse itself and its contact with shore was only bby boat or visual signals. Such attempts failing, the information that the lighthouse had not been alerted was not relayed to HMS Argyll. Assuming that the light would indeed be switched on, the armoured cruiser maintained her course. At 0430 hrs she ploughed into the reef and could not break free. Despite substantial damage to the hull, and a fire, two accompanying destroyers, HMS  Hornet and HMS Jackal, managed to get the entire crew off without loss. 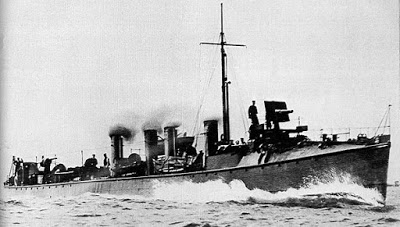 HMS Hornet – one of the Argyll’s crew’s two saviours

HMS Argyll was a total wreck, though efforts to remove her guns and other usable equipment succeeded. Unlucky she might have been, but considering the massive loss of life associated with the sinking of so many other ships of her type, she got off lightly!