“Globalisation” is a term often applied to our own time but the process was in full swing a century and a half ago. The 19th Century saw a vast increase in seaborne trade and passenger-transportation, as new export markets were opened and as economies expanded at an unprecedented rate, not only in Europe and North America, but in newly-emerging nations such as Australia and New Zealand.  Whether by sail, steam or a combination of the two, merchant shipping was a key factor in triggering and sustaining growth as hitherto inaccessible resources and markets were opened for the first time, and mass-migration to new opportunities overseas was facilitated.Ever more-efficient and powerful steam engines and the introduction of iron, and later steel, construction were major drivers. Though the end was in sight for the commercial sailing vessel, there was to be a long twilight – lasting up to and beyond World War 1 – during which such vessels reached a hitherto undreamed level of efficiency and capacity. Major disasters were to occur on the way however, not the least  being the horrific loss of the large steamer SS London in 1866. 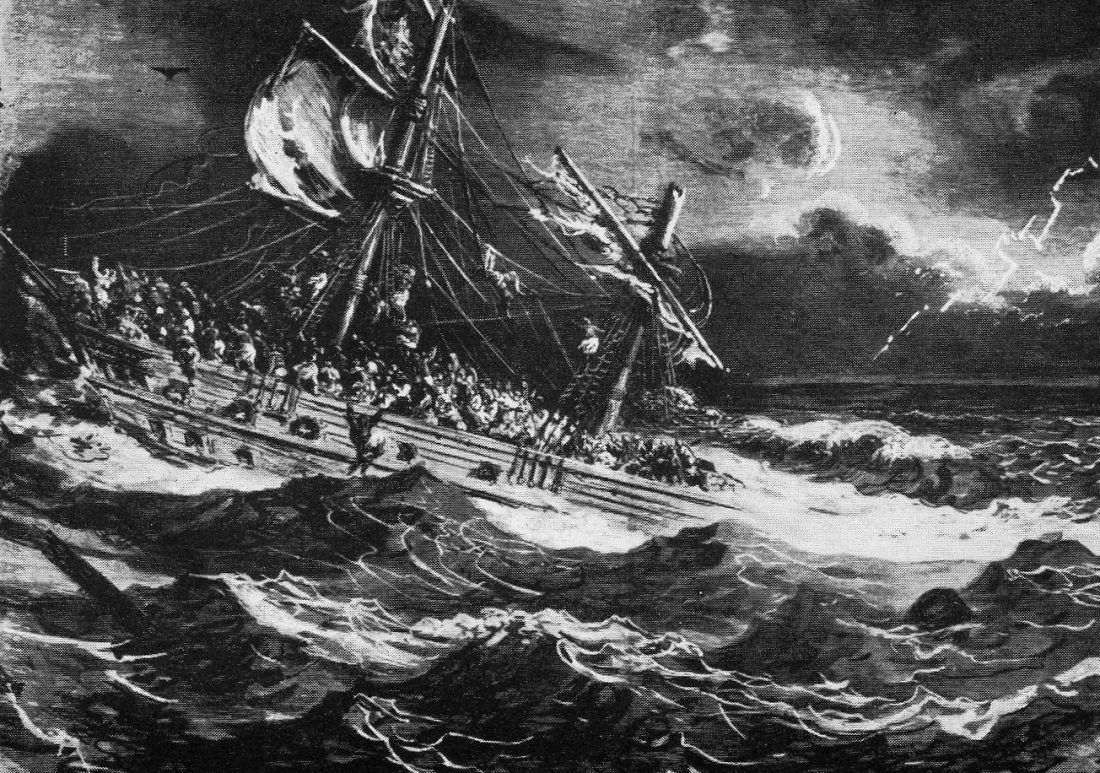 The wreck of the Corsaire by Gustave Dore, 1860
Such disasters were not uncommon in this era

The more one reads about this period, the more that one is struck by the very large numbers of shipping accidents and by the consequent loss of life. Sea travel was hazardous, very hazardous. Marine technology may have advanced very significantly in some areas but the absence of radio – which would not emerge in a practical form until the early 20th Century – meant that once a ship had sailed over the horizon its ability to signal for help in an emergency was restricted to visual range only. Once alone on vast expanses of ocean the chances of securing aid from another vessel were close to zero. A further weakness lay in the absence of loading and operational standards – the “Plimsoll Line” marking on a ship’s side, specifying the maximum draughts to which ships could be laden, was not to become compulsory for British-registered ships until 1876. Foreign ships visiting British ports were not required to comply until 1906. Similar problems related to provision of life boats, and it was only after the Titanic catastrophe in 1912 that this concern was at last addressed comprehensively.

Samuel Plimsoll (1824-1898) is one of the largely forgotten heroes of the 19th Century and for many years he campaigned inside and outside Parliament for compulsory standards of marine safety. One of the cases which drew attention to this need was provided by the loss of the London in 1866, a disaster which received wide publicity in its time, and which also casts and interesting spotlight on Victorian values and behaviour in extremis.

Launched in 1845, the 1652-ton, 280-ft long London was then a state of the art vessel. Built specifically for the Britain-Australia route, she was equipped to carry 317 passengers. Though her 200-hp steam engine could propel her at 9 knots, she was also ship-rigged for sail, which made for fuel-efficiency and reliability on long ocean stretches. Her engine was a “compound” – with steam being expanded in two stages – and as such represented cutting-edge  technology. After commissioning she made two successful voyages to and from Australia and by the time of her next sailing from London, at the end of December 1865, there had been competition to secure berths on this highly-regarded vessel.  As she left she was carrying 263 passengers and crew as well as 345 tons of railway iron. It was later alleged that a seaman who sighted her as she passed down the Thames said at the time “It’ll be her last voyage…she is too low down in the water, she’ll never rise to a stiff sea.” 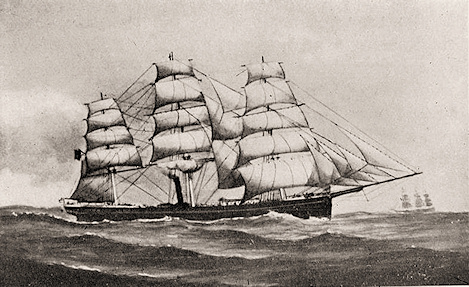 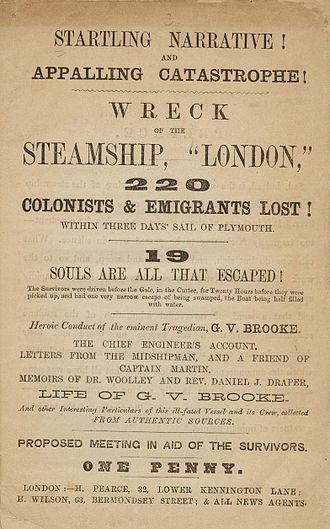 Tragedy struck even before the London left British waters. Putting in to Plymouth to pick up further passengers, the local pilot and his assistant were drowned when their boat was swamped during transfer. Having taken on further coal supplies – some 50 tons of which were stored on deck – the London departed late on January 5th 1866. In the next two days she encountered heavy seas and squalls and rolled badly – the presence of the deck cargo may not have helped. The rolling was so severe that on January 7th, a Sunday, divine service was cancelled – in itself an indication, considering priorities in that age of high religiosity, of the violence of the storm. For the next two days, and now in the Bay of Biscay, the London ploughed on into a south-westerly gale under steam only. Her speed was estimated as two knots.  January 9th found the ship taking seas over her bows and at daybreak a life-boat was washed away. Two hours later the bows drove under so heavily that the sea, and the convulsions that followed, took down the jib-boom, the fore-topmast and foretop-gallant, fore-royal and main royal masts, and with them their spars, sails and rigging. The masts fell inboard, held there by the tangled rigging, but the jib-boom remained under the bows, held there by wire stays. All efforts to clear this failed and the London wallowed all day, and the following night, as the storm continued unabated.

Encumbered as the London was, her master, a Captain Martin, decided the next day, January 10th, to head back to Plymouth. Under full steam, and with fore and mizzen stay-sails set, and running before the storm, the London was now managing five or six knots. The wrecked masts were secured and the jib-boom was finally cleared away. Towards evening however, and now only 200 miles from Land’s End, another violent squall hit, stripping away the stay-sails and another boat. By 2100 hrs the wind was estimated to be at hurricane strength. The engine was stopped and the ship placed under main-topsail only. This was soon blown to shreds and the engine had to be restarted.

Up to this time relatively little water had been shipped but at 2230 hrs a sea arched over the weather, or port, gangway and fell almost vertically on the engine-room hatch. It smashed through, flooding the compartment, extinguishing the fires and stopping the engine. The London was now wallowing helplessly and rolling so badly that the gunwales were going under. The captain realised that getting the engine going again was the only hope now but all efforts to close off the engine-room hatch with sails, mattresses and spars failed. The water level in the compartment was still rising and the captain finally told his men “Boys, you may say your prayers!” 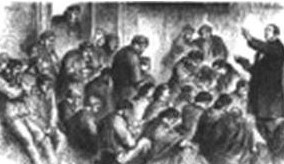 The terror of the passengers during these days of ordeal must have been appalling but the worst was yet to come. At 0400hrs the following morning – the 11th – when it was still dark, four stern ports of the upper cabin were stove in. Water rushed in, causing further flooding, and the ship began to settle. There was now no hope. At 1000 hrs. orders were given to ready the boats for lowering but one was immediately upset and lost.

Captain Martin found a Wesleyan minister, a Mr. Draper praying with women and children gathered around him. The captain told them “Ladies, there is no hope for us, I am afraid. Nothing short of a miracle can save us!” Mr. Draper added “The captain tells us there is no hope – that we all must perish – but I tell you there is hope for all!” His wife was apparently not convinced because when a seaman tried to get her into a boat she handed him a rug. He asked what she would do without it and she replied “It will only be for a few moments longer” 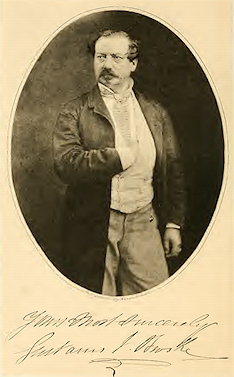 Gustavus Brooke – his last role was his most heroic

One passenger who was to give a heroic example was a famous actor of his time, Gustavus Brooke (1818 – 1866) who had been successful in Britain, Ireland and the United States. Of great strength, he laboured unceasingly at the pumps. According to one source Brooke, “dressed only in a red Crimean shirt and trousers, bareheaded and bare footed, worked until work was useless. When last seen, about four hours before the ship went down, he was leaning calmly on one of the half-doors of the companion(way), his chin resting upon both hands … while he watched the scene with grave composure.”  Men have had worse epitaphs.

By early afternoon the London was sinking rapidly. Life boats were swamped and lost no sooner than they were launched. Captain Martin ordered the ship’s engineer, Greenhill, into one of the last boats with the words “Your duty is done. Mine is to remain here.” When the boat was lowered the captain was again asked to enter it but he replied “No! I will go down with the passengers but I wish you God-speed and safe to land”. He threw in a compass to the boat and shouted “North North-East to Brest” as their course. 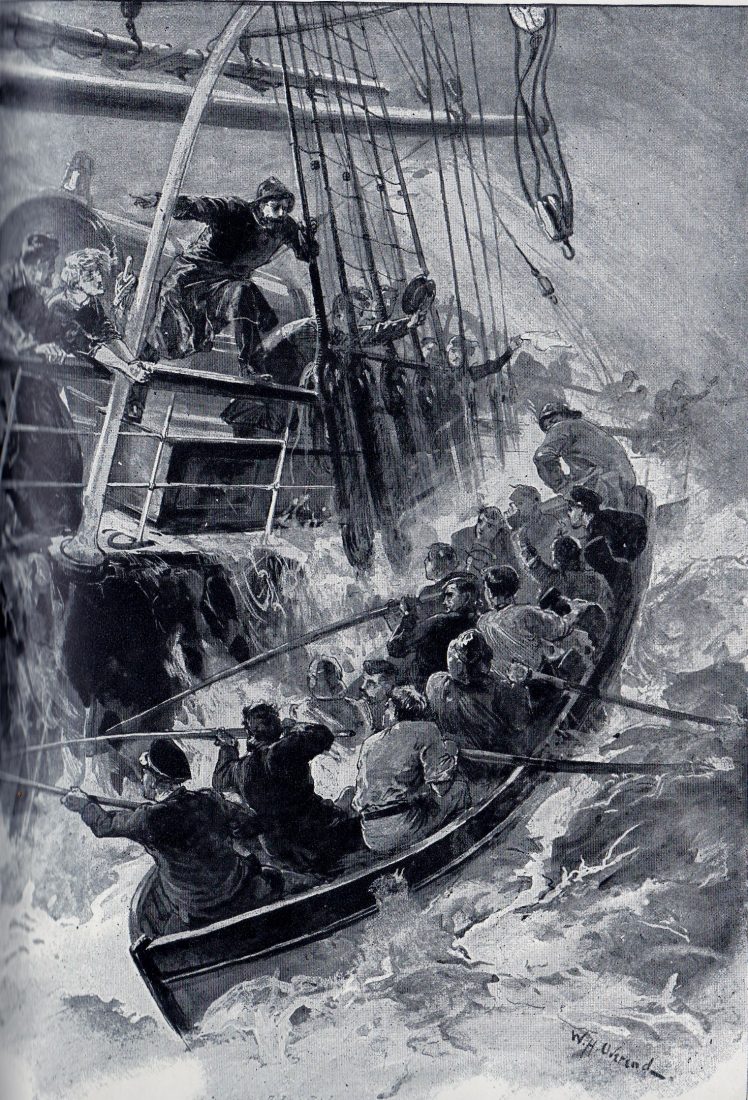 Greenhill’s boat was scarcely eighty yards from the London when she took her final plunge. The stern went under, the bows rose briefly, the crowd on deck was overwhelmed and the remaining boat, full of people, was dragged down in the vortex. Greenhill now had the task of bringing himself and eighteen others to shore, three of them second-class passengers. No first-class or steerage passengers had been saved. After a storm-tossed day in the open boat, and not-sighted by a vessel that passed close, they were finally picked up by an Italian vessel, the Marianopole, and taken to Falmouth.

The death-toll was 244.The customary Board of Trade enquiry followed. (“Lessons must be learned” was even then the same cliché we hear today – and they are still often not). It identified that a major contributory factor to the London’s loss was that she  was overloaded with the 345 tons of railway iron and that the coal stored on deck had blocked the scupper holes, which preventing water taken on to be drained off quickly.

The protracted horror of the London disaster made no less an impact on public opinion than the high death-toll. Funds were set up to help the bereaved, and, as was inevitable after all such events of the era, the Scottish poet William McGonagall wrote epic verse about it. Samuel Plimsoll had one more instance to quote in his crusade to achieve better safety at sea.

But it was to take another ten years before his efforts bore fruit. All who put to sea today are in his debt.

Click here for an 8-minute video in which Antoine Vanner talks about  his latest book, Britannia’s Mission