The Wooden Derelict – a Menace of the Age of Sail

When thinking oneself back into the Age of Mercantile Sail – which lasted up to WW2 – it is hard to imagine just what a menace was represented by a derelict – ships abandoned by their crews but still afloat. The most serious class of derelict consisted of wooden-hulled ships carrying cargoes of wood. Large numbers of such ships were employed on the North Atlantic, carrying timber from Canada to Europe, and another big lumber trade involved carrying hardwoods from South America to the Eastern USA through the hurricane-prone West Indies.

Steel hulls, with their associated heavy machinery are likely to sink if badly damaged but a wooden hull packed with timber might border on the unsinkable. In the case of crews abandoning such ships they were expected to set fire to them. This was however not necessarily done, and if it was, it might not be effective. An example is the barque Lysglint, abandoned and set on fire in May 1921, but which only sank two months later. The photographs shows her as a charred hulk, but still capable of floating and a massive danger to any ship that might encounter her in darkness or fog – this being before the days of radar.

Two views of the barque Lysglint as a derelict in 1921

A derelict could drift for very long distances. In 1888 the schooner W.L.White was abandoned off Delaware Bay. She drifted for eleven months and her movements were carefully plotted by the U.S. Hydrographic Department which was studying derelict movements. She travelled over 5000 miles, driven hither and thither by wind and current.  Reported no less than 45 times by passing ships, she was finally driven ashore at the island of Lewis, in Scotland’s Outer Hebrides.

Another long-lived derelict was the Alma Cummings which drifted for 587 days in the North Atlantic after she had been dismasted and her crew taken off by a passing steamer.  Other vessels sent boarding parties no less than five times but efforts to burn her reduced her upper hull almost to the water’s edge, making her all but invisible and an even greater hazard. After covering at least 5000 miles she finally grounded off Panama, her cargo of wood and her metal fittings being highly prized by those who found her. 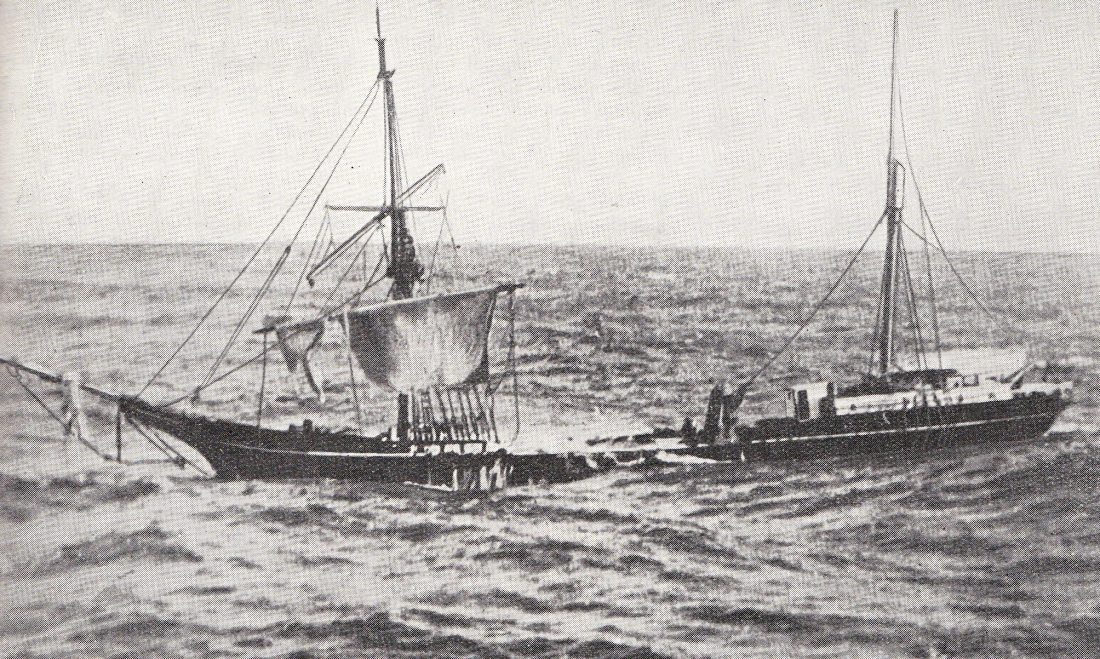 The derelict barque Edward L. Maybury, photographed in the North Atlantic in 1905

The most spectacular derelict voyage was probably that of the Fannie E. Wolsten, an American schooner that was estimated to have covered over 10,000 miles in threeyears, following her abandonment on the edge of the Gulf Stream in 1891. She was reported scores of times in the North Atlantic but finally sank off the coast of New Jersey, not all that far from where she was originally abandoned.

The scale of the derelict menace was immense. C.D. Sigsbee (1845-1923) of the US Navy, who was later a Rear Admiral and is perhaps best remembered as captain of the USS Maine when she blew up in the harbour of Havana, spent much of his career as a hydrographer. In 1894 he published a report on “Wrecks and Derelicts of the North Atlantic 1887 through 1893” which indicated that in this period there were 1,628 derelict vessels adrift (or lost) in the Atlantic alone.

On both sides of the Atlantic it was agreed that “Something must be done” and naval vessels were enlisted to tackle the problem. The solution was not however easy. A timber-filled wooden hull, especially if almost awash, was not easily sunk by gunfire and torpedoes were considered too expensive. The only really effective way was to place gun-cotton charges in such a position as to break the vessel’s back, but gaining access to do so was always dangerous and often all but impossible. Ships employed by the U.S. Navy for this purpose included the aged USS Kearsage, which had sunk the Confederate raider Alabama during the Civil War but which was afterwards relegated to more humble duties.

Ramming was considered as an option, but this required sturdily built ships. Though this had fallen out of favour as a battle-tactic by the 1890s, most naval vessels were constructed with ram-shaped bows. In practice however derelicts proved tough opponents, capable of giving perhaps more than they got. The American cruiser USS Atlanta was damaged during such a manoeuvre in 1895, as was Royal Navy’s protected cruiser HMS Melampus in 1899, both needing to limp home for dockyard repairs. 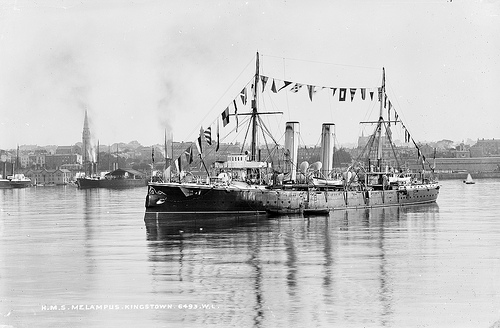 An 1896 bureaucratic measure by Britain was to impose a fine of £5 for failure to report a derelict at the first opportunity. Even allowing for inflation since then, the sum involved was derisory and the means of enforcing were limited.

The most effective measure was finally taken by the Americans who, in 1908, launched the 1445 tons Coast Guard cutter USCGC Seneca, specifically intended for of locating and destroying abandoned vessels. Heavily armed for her size and with excellent sea-keeping and towing capabilities she embarked on a varied 40-year career that also included wartime, ice-patrol, and rum-runner seizure duties.  The photograph below shows her in action. 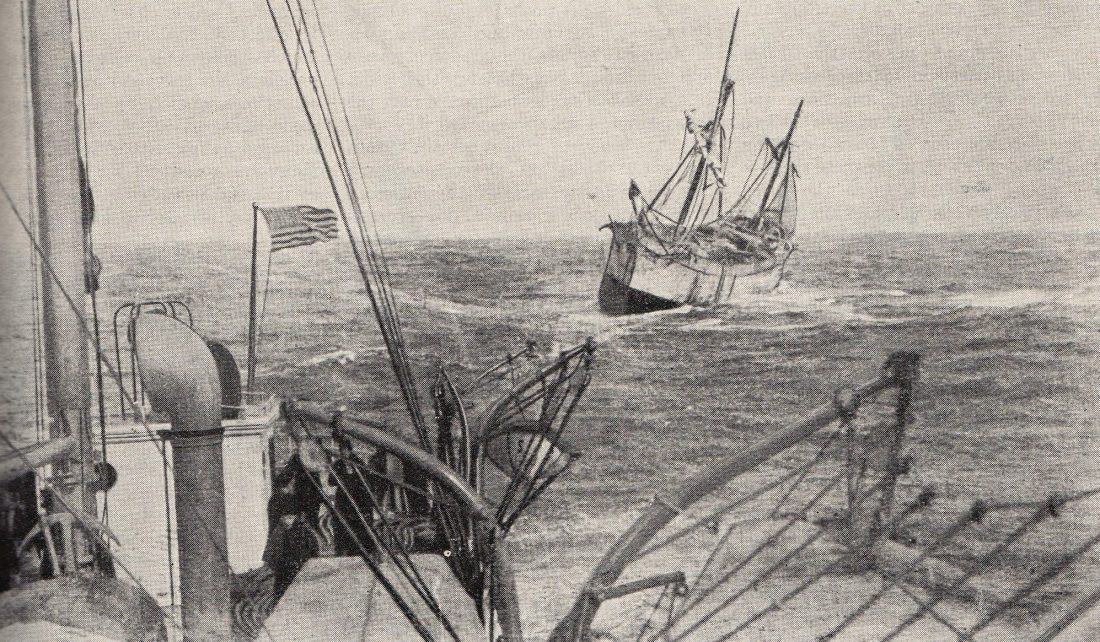 USCGC Seneca with a derelict in tow

The solution to the derelict menace was not however recovery or sinking – it was time itself. The disappearance of the wooden-hulled merchant ship, especially those involved in the timber trade, made such hazards rare, though isolated cases still occur, usually involving much smaller vessels. It may be argued however that a steel contained washed overboard and barely afloat is  worthy successor!