Skip to content
HMS Thunderer 1879 – the end of muzzle-loaders

HMS Thunderer 1879: the end of muzzle-loaders in the Royal Navy

Three ships of the Royal Navy in the 1870s, HMS Devastation, her close sister HMS Thunderer and her slightly larger sister HMS Dreadnought, can be fairly regarded as the models for subsequent mainstream battleship layout and development. 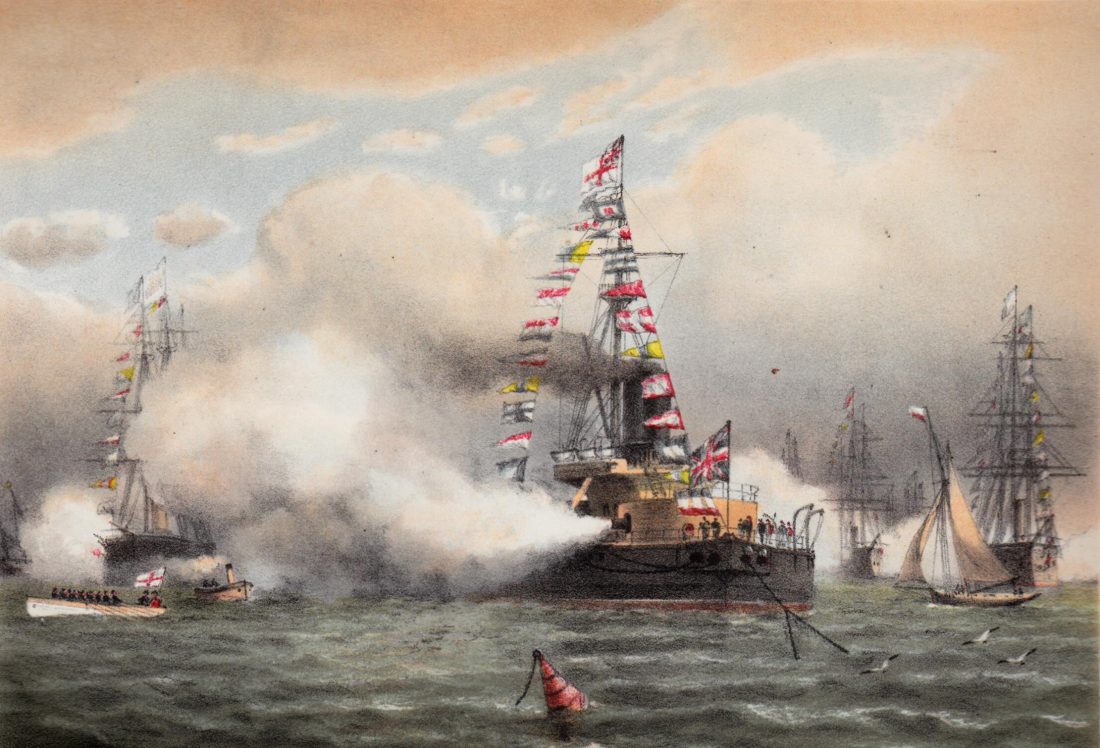 These ships were the first mastless battleships, armed with four 12-inch guns in rotating turrets and with a central superstructure layout. Armoured with 12” of iron from end to end, they were of 6000 tons on a length of  285 feet. Their hydraulic turret machinery and twin screw propulsion put them in the forefront of mechanical design and their coal bunkerage provided a range sufficient – in theory at least – to cross the Atlantic. 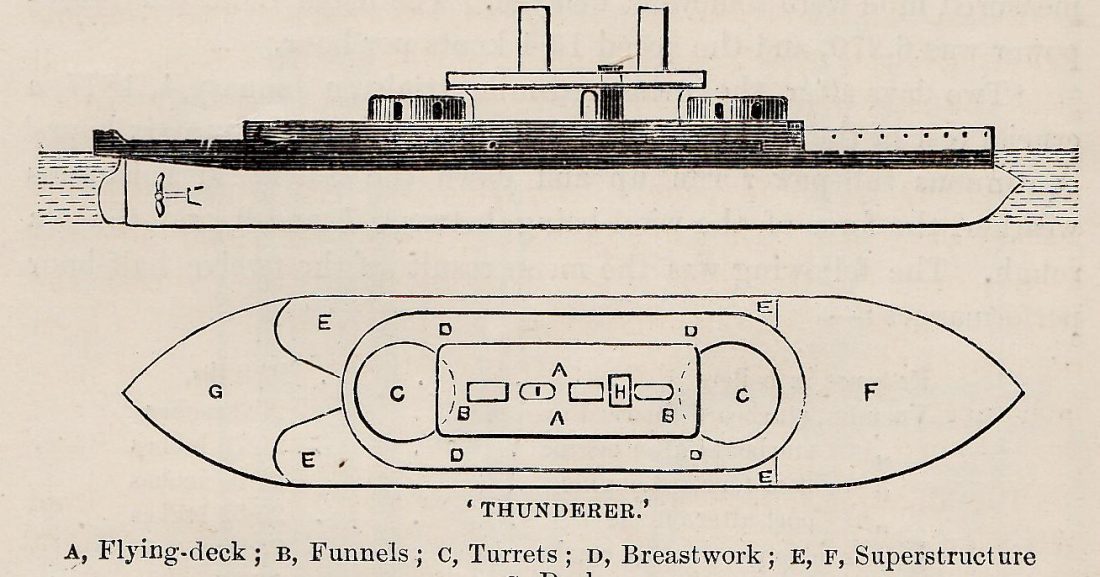 These vessels had however two serious  weaknesses. One was irredeemable – that low freeboard ensured that even in relatively calm seas the foredeck was awash, thereby limiting fighting ability.

HMS Thunderer, her decks awash, in a heavy sea late in her career

The second weakness – the retention of muzzle-loading main armament – was one that could be recovered from, but not before a ghastly accident emphasised the need for change. During the 1860s the Royal Navy had made trials of breech-loading guns, but after a number of failures – mainly resulting from metallurgical problems – there was a reversion to muzzle-loaders, which had none of the complications of machining sealing and easily operating breech closures. Armstrongs, the great British gun-maker, did however persist with development and by the late 1870s much more reliable designs were to become available. In the meantime the Royal Navy relied on ever-larger muzzle loaders, culminating in the 80-ton, 16” calibre weapons mounted in HMS Inflexible (completed 1881).  This was made possible by the use of hydraulic power for handling, loading and ramming these guns with their enormously heavy powder charges and shot. These weapons had remarkable strength, as shown in  experiments with a 9-inch gun In 1869, the central tube splitting only when the 1,008th round was fired. The metal yielded gradually, and the strength of the outer jacket was thoroughly proved by firing a further 41 forty-one rounds after the barrel had split, and still the exterior remained perfectly sound.

In the case of HMS Thunderer and her sisters, the guns were of 12” calibre and 38 tons weight. Mounted in turrets fore and aft they were run out for firing but were thereafter run back in again, and the muzzles depressed so that fresh projectiles could be loaded – the illustration below shows the process.

HMS Thunderer’s career was to be marked by two serious accidents. The first was not gunnery-related and involved a boiler explosion in July 1876 as she proceeded from Portsmouth Harbour to Stokes Bay to carry out a full power trial. This killed 15 people instantly, including her captain who was in the boiler room at the time, and injured around 70 others, of whom 30 later died. The reason for the explosion was that the pressure gauge was broken and the safety valves had seized through corrosion. The boiler explosion signalled the end of box boilers in favour of the Scotch cylindrical type, and it led directly to the writing of the first official RN Steam Manual in 1879. One also imagines that there was increased attention thereafter to the inspection and testing of safety valves! 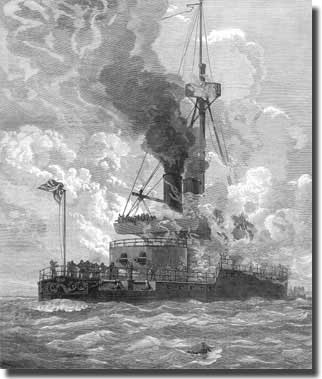 HMS Thunderer enveloped in smoke and steam as a boiler explodes, July 1876

The second accident happened when HMS Thunderer, attached to the Mediterranean Fleet, was exercising in the Sea of Marmara on January 2nd, 1879. One of the 38-ton 12” guns mounted in the forward turret burst, killing two officers and eight men, besides wounding several others. 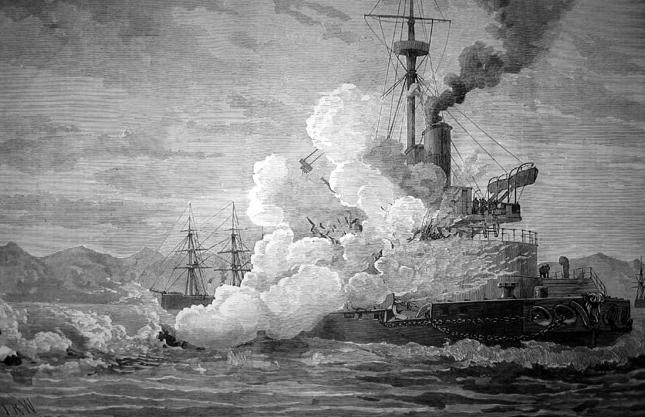 In view of the implications of the accident – the possibility that a class of weapon that armed the navy’s most powerful ships was fatally defective – the Admiralty appointed a commission of officers and scientific experts by to investigate its causes. This commission decided that the accident had been the result of a deplorable error in loading discipline, made worse by the inherent nature of the loading process and that on the day the gun had been fired when loaded with two complete rounds of powder and projectile. 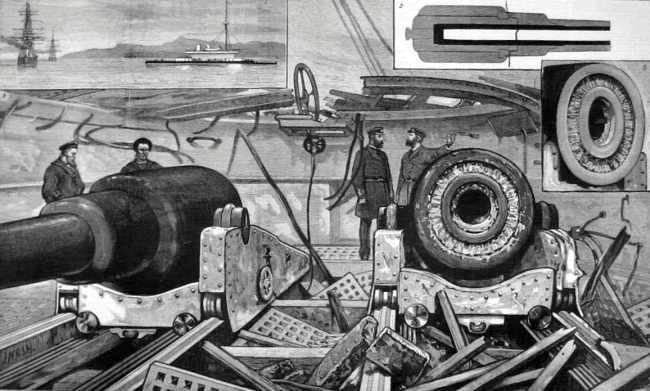 The aftermath of the explosion – damage inside the turret

During the firing exercise it was intended to fire the two guns simultaneously, both being loaded with a battering charge of 110 lb. of powder and a Palliser projectile 800 lb. in weight. One gun, however, missed fire, although nobody was apparently aware of the fact –  the concussion and the smoke made by the discharge of one gun was so great that it was considered difficult for anyone was on the look-out to tell that they were not due to both guns. The crews were drilled to run their guns in directly they fired, so as to be in readiness for reloading and, not observing that one of the guns had not gone off, they proceeded to run in. Both guns were reloaded through the muzzle, by the hydraulic system, with the result that the weapon with the double charge burst when the next round was fired. 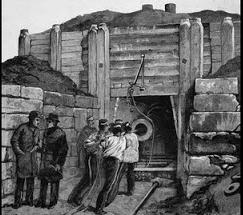 Surviving 12″ from turret in test cell at Woolwich Arsenal

When the Admiralty received the report of the commission they determined, “in order that no question should arise in the future as to the correctness of the conclusions which the committee had arrived at”, to have the surviving gun brought back to Britain and subjected to trials, with a view of ascertaining under what other conditions it would burst. These tests were conducted at Woolwich Arsenal, the gun being enclosed in a protective bunker or “cell” to avoid further risk to life.  After a series of experiments however, when every suggestion had been tried without injuring the gun, it was double loaded, just as the commission had reported that in their opinion the burst gun had been. When the smoke cleared away from the ceIl it was found that the gun had burst like its former companion, and that the fractures in the two guns were nearly identical. 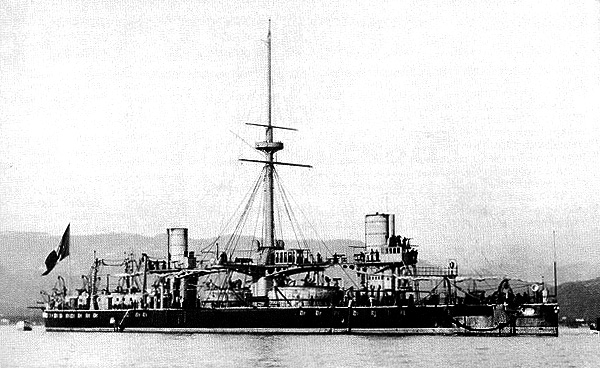 Another accident, which, however, fortunately was not attended by loss of life, occurred to one of the massive Armstrong 100-ton rifled muzzle-loading 17.7” guns mounted on the Italian battleship Caio Duilio. This followed close on the HMS Thunderer disaster, in March, 1880, when the gun was being tested for acceptance. In this case the barrel was fractured, the rear portion being forced to the rear, and carrying with it the covering jackets, none of the superimposed coils, however, being injured.

These accidents undoubtedly strengthened the feeling in favour of a return to breech-Ioaders which had been growing in the mind of the Navy for some time, since it was quite certain that no such mistake as double-loading could be made with a breech-loading gun, as it was impossible to force the projectile home beyond a certain distance, and consequently there would not be room for a second charge. By this stage advances in metallurgy had made breech-loading of even large weapons a practical option and over the coming years new breech-loaders were substituted for muzzle loaders still in service. Among the ships to be so upgraded were HMS Thunderer and her sisters, receiving 10” weapons, as per the diagram below.

This final acceptance of the superiority of the breech-loader brought to an end an era that had begun in the days of Drake and which encompassed all the great naval actions of the seventeenth, eighteenth and early nineteenth centuries. It was truly the end of a glorious era.

The seven books of the Dawlish Chronicles series published so far deal with the 1870s and 1880s, the decades of massive technological change and of conflicts on the margins of empire.