Skip to content
Passing by on the other side at sea? 1876

The Good Samaritan has had a deservedly good image over the last two millennia. An equally well-deserved degree of obloquy has been heaped on two others who had previously seen the unfortunate traveller who had fallen among thieves but who “passed by on the other side” without helping. On countless occasions at sea captains and crews have played the Good Samaritan role, risking their ships and their lives to help others in distress and it has been a matter of pride among seafarers of all nations that they should do so. It is however a chilling though that there have been occasions when ships have “passed on the other side” and have ignored requests for assistance. Reduction of visibility due to bad weather may play a role in such cases and one would always like to give the benefit of the doubt as regards innocence. The uneasy feeling does remain that at many times – especially in pre-radio days – distress appeals went unanswered and the subsequent disaster ensured that no survivors remained to appeal for justice. One such incident occurred at the Kish Bank in the Irish Sea in 1876. 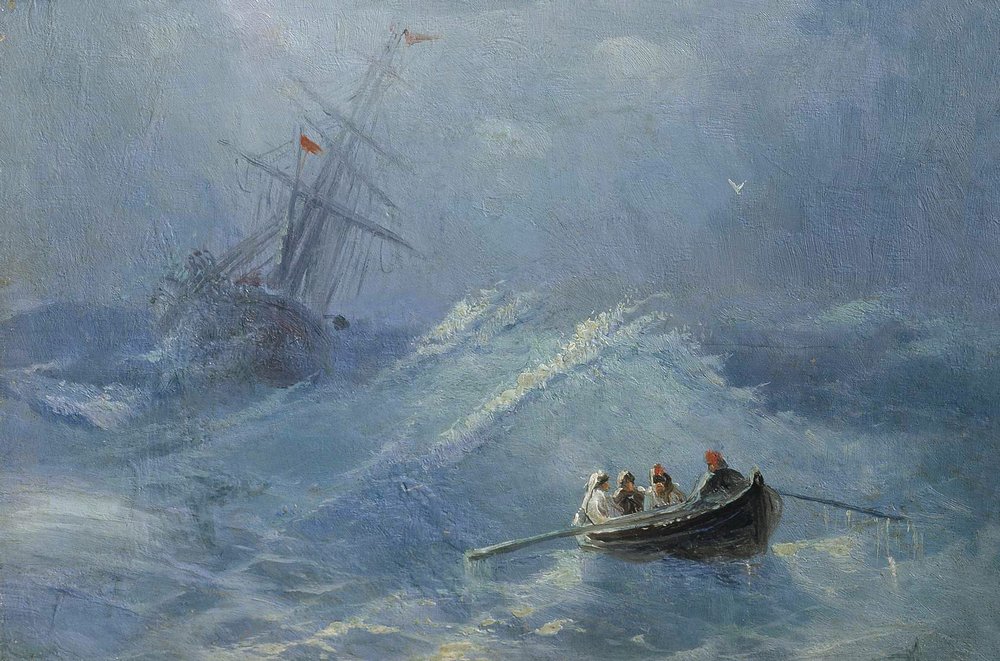 The reality of shipwreck – the classic painting by the Russian artist Ivan Aivazofski (1817-1900). The wreck of the Vesper in 1876 must have looked very similar to this.

A short newspaper article from 1876 which sets out bare facts only and on which it is hard to come to a verdict one way or the other. The Kish Bank is a shallow sand-bank in the Irish Sea, some dozen miles due east of the port of Dublin. It was known for centuries as a hazard to shipping and a lightship was first moored on it in 1811. Lightships continued to provide warning until 1966 when a lighthouse of innovative design was installed. This telescopic structure was built of concrete close to Dublin and was towed to the bank. After sinking in position the telescopic sections were raised, giving a final height of 100-feet. This Kish Bank lighthouse is clearly visible from shore in clear weather. 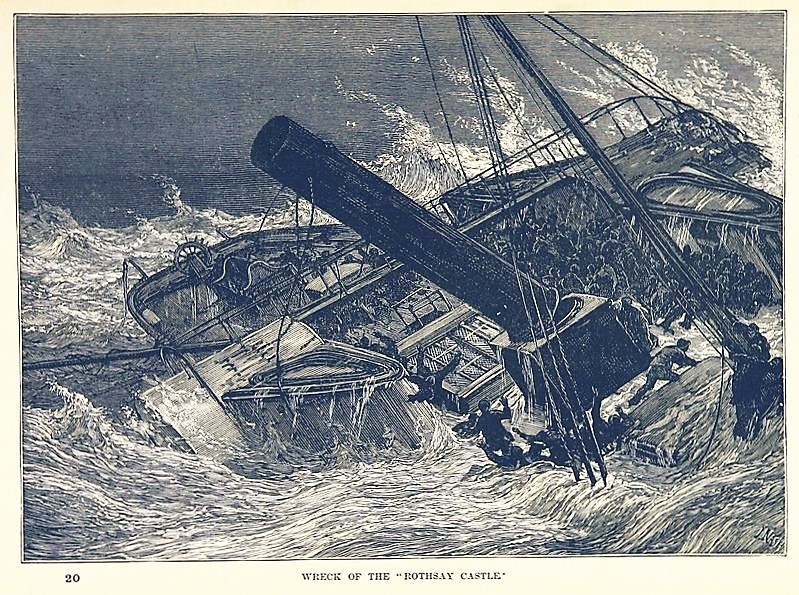 In January 1876 a relatively new (built 1865) merchant steamer, the Vesper, ran aground on the Kish Bank. What followed was succinctly summed up in an article that appeared the following day in the Dublin daily newspaper “Freeman’s Journal”.  It is quoted in its totality below:

Yesterday a screw steamer bound from Glasgow to Dunkirk ran on the Kish sandbank. The steamer was the Vesper, 60 horse power, laden with a cargo of 620 tons of coal and sugar, in command of Captain Tolson with a crew of 18 hands and belonging to Messrs. Huntley Berner and Co, of Glasgow.

The ship left Glasgow the previous night at 10 o’clock. The captain was on watch at the time the vessel struck. She began to fill and all efforts to get her off having failed, he ordered signals of distress to be made. A large fire was lit on the deck with paraffin oil and blue lights were burned from the masthead. The vessel was not observed by any of the life-boats crews or coastguard along the shore, although the weather was perfectly clear.

A heavy sea was running at the time and as the ship began to settle down the sea washed over her decks. In three hours the water rushing in forced up the hatchways upon which the crew had to take to the boats. One of them was stove in and the port boat was washed off the ship. The only remaining one to which the crew had to take was the starboard.

The crew say that before leaving a steamer passed in sight shortly before seven o’clock without paying any attention to their helpless condition and soon after another steamer and a fishing smack passed few miles off and left them in the same plight. The crew and captain, numbering fourteen men, left the ship about eight o’clock in the boat and steered for land which was about twelve miles off and they arrived in Killiney Bay about eleven o’clock when they were assisted by some men, and were provided with railway tickets for Dublin by the Station Master and afterwards put up at the Sailors Home.

One is struck by the cold precision of the report – the impression that there was nothing particularly remarkable about the event. Considering the number of shipwrecks that occurred in British coastal waters in this period this is perhaps not surprising. A single instance suffices – in a major storm in February 1871 no less than 28 ships, many of them collier brigs, were wrecked off the North East Coast of England. 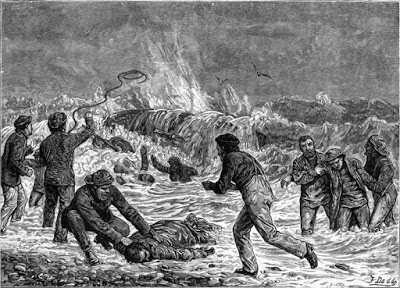 The Vesper’s destruction on the Kish Bank was obviously a terrifying event and her crew were lucky to have got off her alive. One does however wonder whether the ship was ever in fact seen by the vessels in the vicinity or whether these latter did indeed “pass on the other side”. Had they done so the action might not have been prompted by callousness alone, but by a realisation that bringing in another vessel over the bank would have resulted in her destruction also. Today, in the early 21st. Century, one would expect that such an incident would have been the subject of detailed investigation. This may have happened in 1876 – if so details are hard to come by.

And as regards the vessels that passed by on the other side at the Kish Bank? At this remove it is perhaps best to avoid judgement and give the benefit of the doubt. There was however one undoubted Good Samaritan – that role was played the Station Master who provided the train tickets!

The seven books of the Dawlish Chronicles series published so far deal with the 1870s and 1880s, the decades of massive technological change and of conflicts on the margins of empire.