In reading about warfare in the Age of Fighting Sail one is invariably impressed by the aggression and sheer bloody-minded will to win that characterised the officers and crews of the Royal Navy. These were the factors that regularly brought victory even when the odds seemed stacked against British ships and the enemy, usually French or Spanish, never seems to have had the same single-minded focus on prevailing. Only in the War of 1812, when Britain again confronted the United States, did the Royal Navy consistently encounter enemies with the same ruthless commitment to victory. 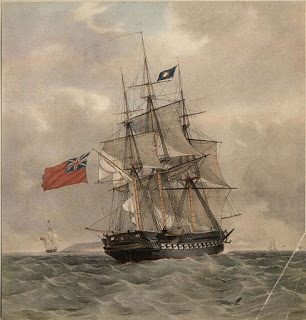 HMS Pomone – a typical frigate of the time – Color lithograph by T. G. Dutton after painting by G.F. St. John

These thoughts came to me this week when leafing again through the Victorian classic, “Deeds of Naval Daring” by Admiral Edward Giffard (1812-1867), and came on an action I had not previously known of. This was a duel between equally-matched British and French frigates, HMS Santa Margarita, an ex-Spanish prize, and the French L’Amazone in 1782. Built for the Spanish navy in 1774, HMS Santa Margarita had been captured off Lisbon in November 1779. Take into British service, she was refitted in 1780/81 and sent in June 1781, under the command of Captain Elliot Salter, to join a squadron off the American coast

In September 1781, French success in the Battle of the Virginia Capes was to be the deciding factor in ending the American War of Independence as it cut off supplies to British forces at Yorktown and necessitated their surrender. The final peace-treaty would not be signed for another year and a half but the war was effectively decided from that point. The outright British victory over a French fleet at the Battle of the Saintes in April 1782, impressive as it was at a tactical level, was a hollow one that had no impact on the outcome of the war.

Notwithstanding this, a French naval squadron was still operating off the American coast in July 1782 under Admiral de Vaudreuil (1724-1802), who had taken command of the remnant of the French fleet after the Saintes battle. It was this force that Salter in HMS Santa Margarita, on detached service, was to run into off Cape Henry, at the entrance to Chesapeake Bay, on 29th July.  Salter had initially spotted a frigate only – apparently a 36-gun unit like his own vessel – and gave chase. As Santa Margarita neared her quarry, eight French ships-of-the-line were seen bearing down on her. Salter turned to fly, caught as he was between the French squadron and a lee shore, and the frigate he had initially chased now turned and came on after him. With their superior speed, both frigates outran the heavier units but HMS Santa Margarita appears to have been the faster of the two. By mid-afternoon, the French unit – which proved to be L’ Amazone – decided to give up the chase and return to the squadron. Given the very powerful French force in the area, Salter might have been well-advised to continue on and to complete his escape. Instead, he came about and followed L’Amazone. Once again HMS Santa Margarita’s superior speed proved its value and within two hours both ships were within gunshot. 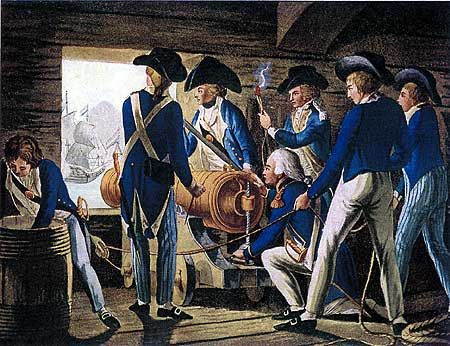 French guncrew with carronade – a rather idealised view, with formal and immaculate uniforms!

The opening broadside came from L’Amazone – one suspects that in accordance with French practice it may have been aimed at HMS Santa Margarita’s masts and rigging. Salter held his fire however and manoeuvred so as to rake his opponent – a devastating action that sent fire down the enemy’s central axis – and followed up by taking his ship “within pistol shot.” What is shocking to the modern reader is that the close-range slugging match that followed lasted an hour and a quarter. One can only imagine the hell of noise and smoke, injury and death that followed. Fighting a sailing warship demanded more than a single team, but rather a team of teams, each one – especially the individual gun crews and the marines in the tops – fighting its own battle and yet still an integral part of the larger team. Continuous exercising would have been one factor to guarantee this level of efficiency in action but one suspects that morale was even more important, and in this the British crews usually seem to have had the edge. 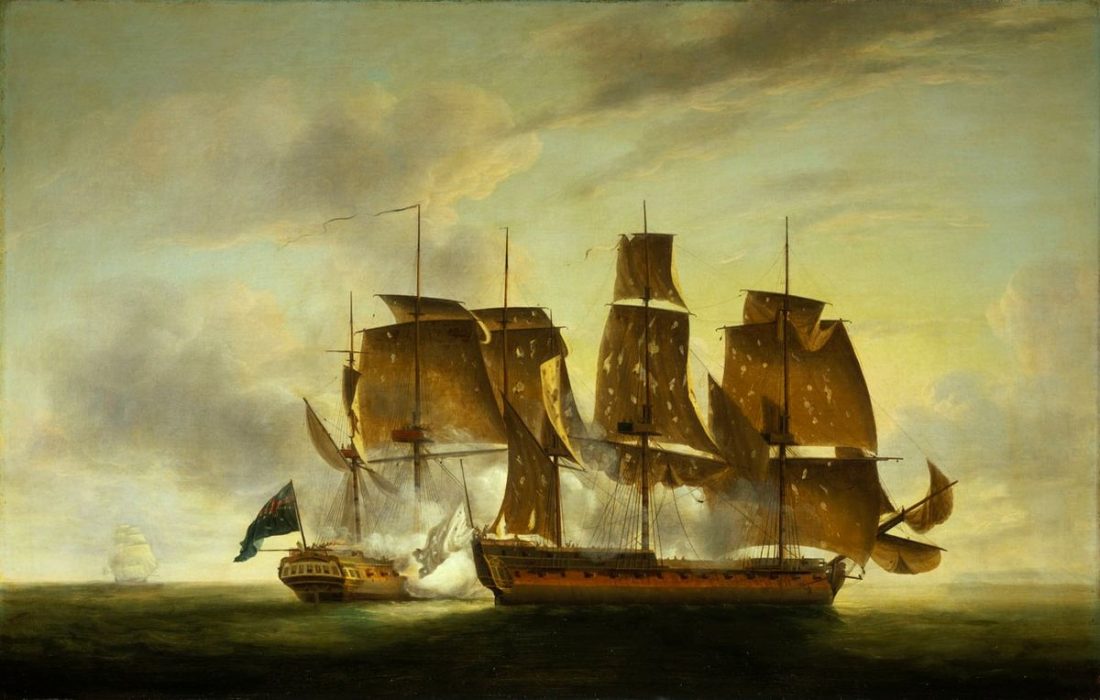 HMS Santa Margarita (l) in action with L’Amazone. She appears after passing under her stern to rake her
Painting by Robert Dodd (1748–1815) and/or Ralph Dodd (circa 1756-1822) with thanks to Wikimedia Commons

Badly shattered, with seventy killed, and slightly more wounded from a crew of three hundred, with both main and mizzen masts toppled overboard, with several guns dismounted and with four feet of water in her hold, L’Amazone struck her colours. HMS Santa Margarita took her prize in tow. Salter’s crew worked through the night to repair L’Amazone’s damage sufficiently to sail her away. A start was made on transferring her surviving crew to HMS Santa Margarita as prisoners – a process hindered by the boats of both ships having been destroyed or damaged in the fighting.  At dawn however, the French squadron was seen approaching. There was no option but to abandon L’Amazone. Salter’s preference would have been to burn her but, with large numbers of French prisoners still on the crippled ship, common humanity prevented it. By now faced with overwhelming force, HMS Santa Margarita once again made use of her speed and escaped. Her casualties were five dead and seventeen wounded. As in so many of such actions one is stuck by the disparity in casualties – perhaps because HMS Santa Margarita managed to rake her opponent. 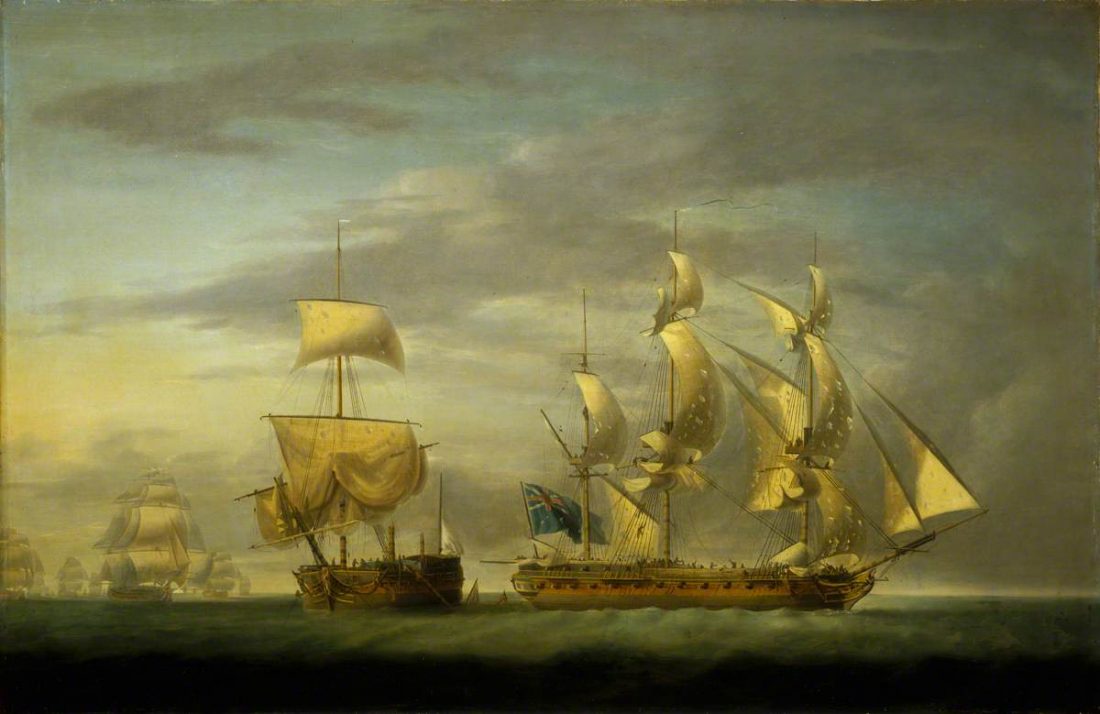 A pleasing aspect of the account given by Giffard is that it includes extracts from Salter’s official report. He gave considerable credit to the French captain, noting the“gallant and officer-like conduct of Viscomte de Montguiote in leading his ship into action”, who was killed early in the action, and even more to the second-in-command who took over, the Chevalier de Lepine. This gentleman “did everything that an experienced officer could possibly do, and did not surrender until he himself and all his officers but one, and about half the ship’s company were either killed or wounded.” After listing L’Amazone’s damage, Salter characterised it as “a situation sufficiently bad to justify to his king and country the necessity of surrender.” One suspects that had the outcome been reversed, the French captain’s report would have been equally generous of spirit.

I have been unable to find out any more about Elliot Salter, other than that the first mention of him was as a lieutenant in 1765 and that he died in 1790, how, or at what age or rank, I do not know. Would any of this article’s readers be able to shed some light on the career of this intrepid officer?

You may enjoy Britannia’s Gamble 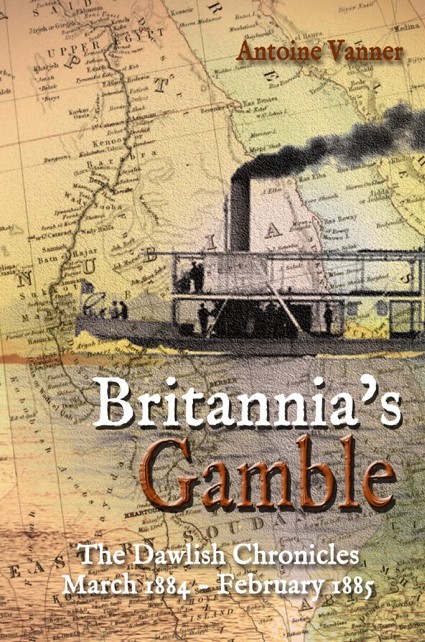 Below are the nine Dawlish Chronicles novels published to date, shown in chronological order. All can be read as “stand-alones”. Click on the banner for more information or on the “BOOKS” tab above. All are available in Paperback or Kindle format and can read at no extra charge by Kindle Unlimited Subscribers.