Two recent blogs described the loss of low-freeboard monitors in the open sea, the Dutch Adder in 1882  (Click here to read) and the Russian Rusalka in 1893 (Click here to read). In both cases the inadvisability of taking vessels designed for protected coastal waters into open-sea conditions was a major contributory factor to the disasters. A much earlier monitor did however make a very spectacular ocean passage in 1866/7. This was the twin-turret USS Miantonomoh, the lead ship of a class of four wooden-hulled but ironclad vessels authorised in 1862, soon after the original USS Monitor had made her spectacular debut. 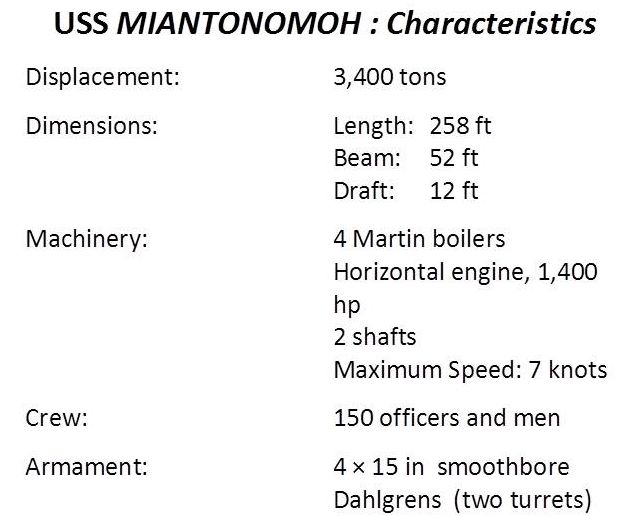 Details of the USS Miantonomoh are provided in the table.

Commissioned in late 1865, too late to play a role in the Civil War, the USS Miantonomoh was selected to make an extended cruise to European waters. The most important objective was to maintain good relations with Russia, which had proved itself supportive of the Union cause during the war, and had demonstrated this by a squadron visiting New York at the height of the conflict.  Purchase of Alaska by the United States was now also on the cards and there was every reason to ensure a cordial atmosphere for negotiation. The ostensible reason for the trip was to present Czar Alexander II with a  copy of a Joint Resolution of Congress which congratulated him on his survival of a recent assassination attempt (probably all the more heartfelt in view of President Lincoln’s death in a similar incident the previous year). The responsibility for this diplomatic task was assigned to the Assistant Secretary of the Navy, Gustavus Fox, who was also instructed to gather information of European naval strengths. Pride in showing off American technological progress, and in the nation’s emergence as a major power after the Civil War, probably also played a role. 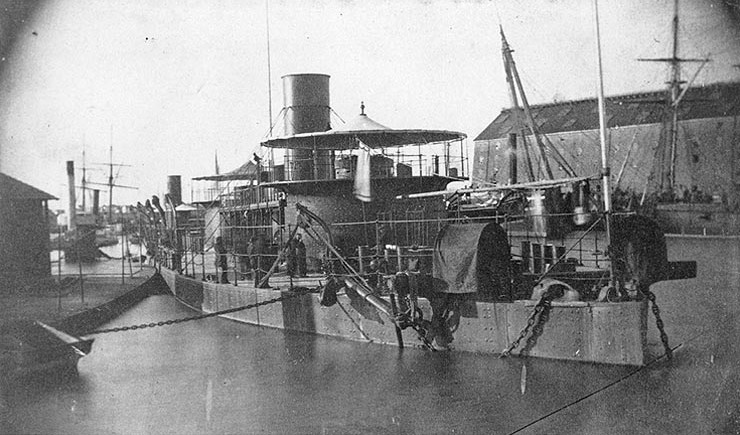 The USS Miantonomoh left in May 1866 in company with two paddle steamers, the double-ended Mohongo-class gunboat USS Ashuelot and the USS Augusta, originally a civilian vessel, which had seen very extensive blockading service off Confederate ports during the Civil War. 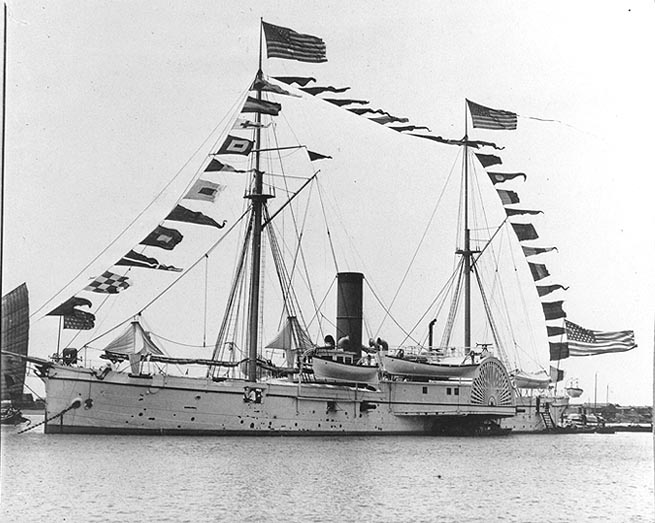 The small flotilla touched in briefly at St. John’s, Newfoundland.  Here, a witness quoted in a Victorian-era book, and who appears to have been a Royal Navy officer, was stubbornly determined not to be impressed:

“Notwithstanding a certain eagerness to behold a specimen of their floating batteries, curiosity was not destined to be gratified until nearly two years after the close of the American War, when the United States Government determined on sending a representative—the Miantonoma (sic)—to make a tour of the world. The object of this resolution was to prove that the American invention was not a mere floating battery, but was destined to revolutionise the system of armour-plated ships. The Miantonoma was accompanied when she made her appearance in the harbour of St. John’s, Newfoundland, by two tenders …   The Miantonoma was a twin-turreted monitor, carrying two of Parrot’s 480 pounder smooth-bore. Her spar-deck, which was flush fore and aft, was about two and a half to three feet above the surface of the water in harbour. What we would call the gun-deck was below the water-line some eight feet, and here at sea during any sort of rough weather, the men were compelled to live. Air was supplied (faugh! what an atmosphere it was, even in harbour!) by means of pipes which ran up to a scaffolding—I can find no better name for the structure—elevated above the spardeck by fifteen feet. Here were the wheel-house and a place for the look-out. But as it was apprehended that the first respectable gale would take charge of the flimsy structure and sweep it all away, a ‘preventer’ steering apparatus worked below, and knowledge was gained of what was going on in the upper world by means of reflectors. Two things struck the eye of an observant stranger on gaining the side. The first was the formidable appearance of the turrets—the latter, mirabile dictu, the number of spittoons!”

The USS Miantonomoh then embarked on the North Atlantic crossing to Queenstown (now Cobh) in the south of Ireland.  She was towed by the Augusta, “as a matter of convenience and precaution rather than necessity.” She appears to have carried only a minimal crew, so that one imagines that all hatches and openings were closed off securely. The crossing was fast – eleven days. 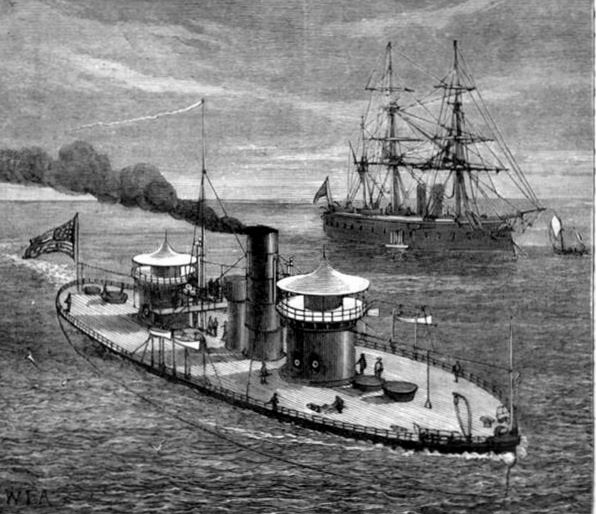 Now apparently under her own steam, the USS Miantonomoh sailed via Portsmouth to the French naval base at Cherbourg,  arriving in late June, following diplomatic talks between Gustavus Fox and Emperor Napoleon III. She returned to Britain thereafter and was visited by royalty, government officials, and members of the press, all of whom viewed her with wonderment and amazement. Her innovative design was widely commented on, The Times newspaper stating, with some alarm: “The wolf is in our fold; the whole flock at its mercy.” 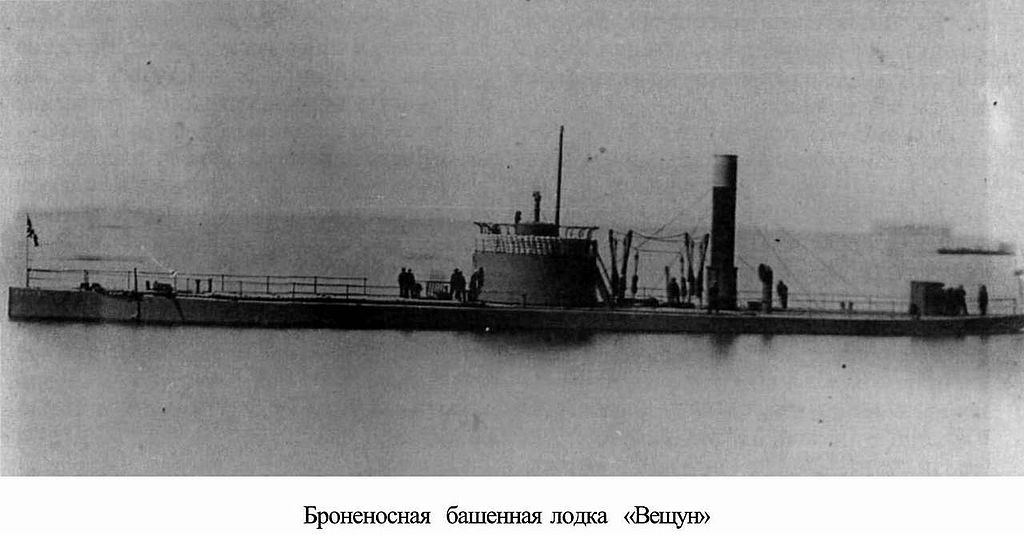 The USS Miantonomoh left Britain in mid-July, en route to the Russian capital. She stopped off at Copenhagen – where she was inspected by King Christian IX and the royal family – and then steamed on to be met near Helsingfors (now Helsinki) by eleven ships of the Russian Navy, including four monitors of the Uragan class (built as copies of the US Navy’s Passaic class), and escorted to the main Russian base of Kronstadt, just outside St. Petersburg. Here she was to be the centre of attention form the czar himself as well as leading Russian naval officers. She stayed a month and her commander, Captain Alexander Murray, was later to write: “We were the victims of a hospitality which I did not believe had an existence out of America, and…of a generosity which does not often fall to the lot of navy officers anywhere;….”

The triumphant progress continued, from Russia to Stockholm, the Swedish capital, in mid-September and then on to Kiel in Northern Germany, and then on to Hamburg, where she was apparently inundated with admiring visitors. The USS Miantonomoh then sailed south, visiting French, Portuguese, Spanish, and Italian ports during the next six months, showing the flag where it might never have been shown before. She finally left European waters, from Gibraltar, in mid-May 1867 and reached Philadelphia two months later via the Canary and Cape Verde Islands and the Bahamas. Once again she appears to have been towed, and presumably battened down,  over these ocean stretches. The total cruise was of some 17,700 miles.  Except for a short commission in 1869 she was to see little more service. 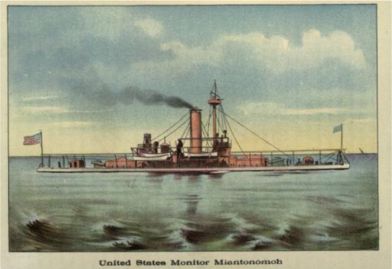 Wooden-hulled, despite her armour-cladding, the USS Miantonomoh’s days were numbered.  In 1874, by a legal fiction that avoided allocation of funds for new naval construction, funds were allocated by Congress for “completing the repairs” of the USS Miantonomoh and three other monitors. The “repairs” consisted of the constructing of new vessels under the guise of repairing the old ones. She was broken up in 1875 and but few of her materials were used in the building of the larger, more heavily armoured, iron-hulled “New Navy” monitor which became the second USS Miantonomoh.

But her career is another story.