(Click here to read Part 1 if you missed it previously)

With a major portion of his crew and passengers having reached safety in Cuxhaven – albeit at the cost of a fearful trek across fissured ice – Captain Wallis remained on Neuwerk Island in the Elbe estuary with the remainder of his crew. Food was running short there and HMS Proserpine, abandoned as she was in the ice, but visible from Neuwerk, might well be still afloat. Supplies were to be had there if she could be reached. On 8th February Wallis accordingly sent a small group, led by the ship’s master, a Mr. Anthony, to fetch whatever they could from the wreck and bring it back to the island 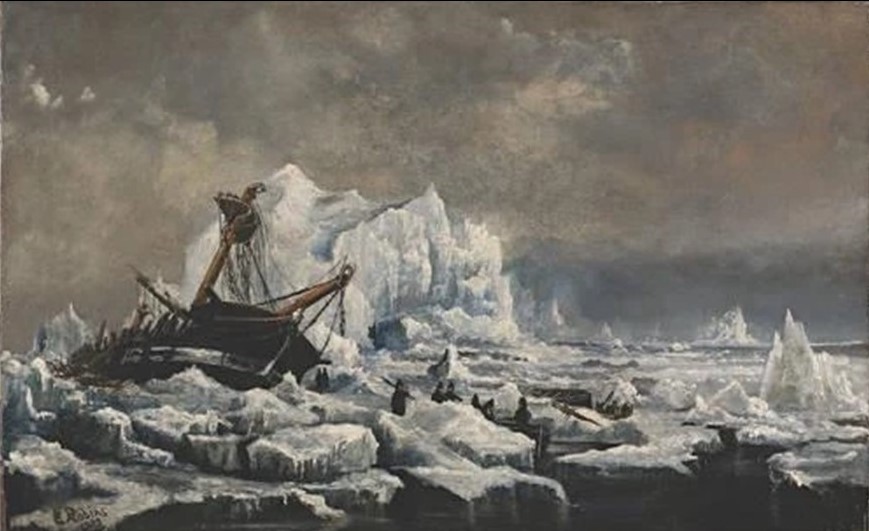 How HMS Proserpine may have looked when Anthony’s party found it (Painting of a  wreck in the Arctic by E. Robins, active 1882-1902)

Anthony’s party reached the ship with much difficulty – another nightmare six-mile plod over broken and stacked ice – and found her lying on her beam-ends, with seven or eight feet of water in her hold. With many of her timbers smashed, HMS Proserpine’s hull seemed held together only by the pressure of the surrounding ice. Anthony and his men managed to get back to the island and, based on what he was told, Captain Wallis thought it inadvisable to risk a second visit. Two days later however he changed his mind. Mr. Anthony set out again, accompanied by the surgeon, the boatswain, one midshipman, and two seamen. A day and a night passed and a violent storm arose. When it finally cleared, Wallis looked towards the wreck – and did not find it. 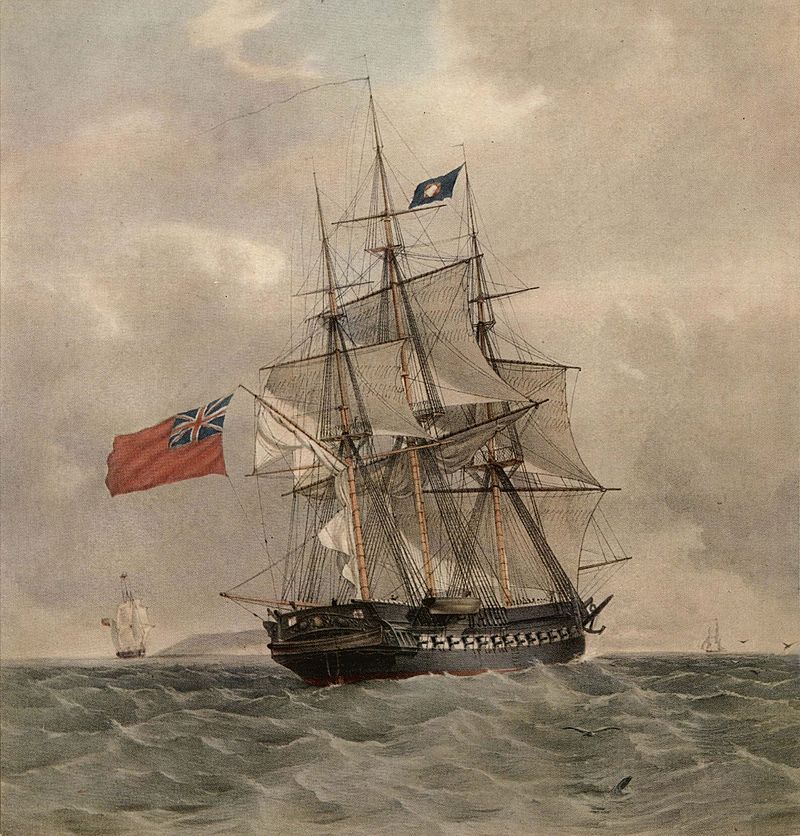 The outcome had proved however better than first feared. After reaching the wreck, Anthony’s group had plunged into the task of salvaging provisions. While they were busy a wide channel opened through the ice, cutting them off from Neuwerk Island and leaving them no option but to remain on board. During the night that followed the wind, previously from the south-east, now shifted to the north-west and built up to storm level. This gale, together with a rising tide, lifted the wreck off the shoal beneath her and tore away much of the belt of ice that surrounded her. By morning she was drifting seawards (the wind appears to have shifted again).

The fear was now that the remaining ice around the ship would be ripped free, leaving her to break up. There was no hope of grounding again in this area – sounding indicated eleven fathoms, almost seventy feet, below the ice. Even in these extremities, every effort for saving the ship was tried. Guns were fired to attract any other vessel in the vicinity, the pumps were manned and almost all the remaining guns were dumped overboard to lighten the vessel. The frigate’s cutter, a large and heavy boat, was still on board and they rigged tackles for lowering it. In reading of these brutal labour it should be borne in mind that these half-dozen men had been exposed to extreme cold, privation and exhaustion for almost two weeks.  At this stage the only factor in their favour was that they had access to sufficient supplies.

At last, on the morning of 12th February, land was sighted. Distress signals were hoisted, and guns fired, but no assistance came. Soon afterwards HMS Proserpine grounded again, this time a mile and a half from the East Friesian island of island of Baltrum. She had drifted some forty miles since her first running aground. 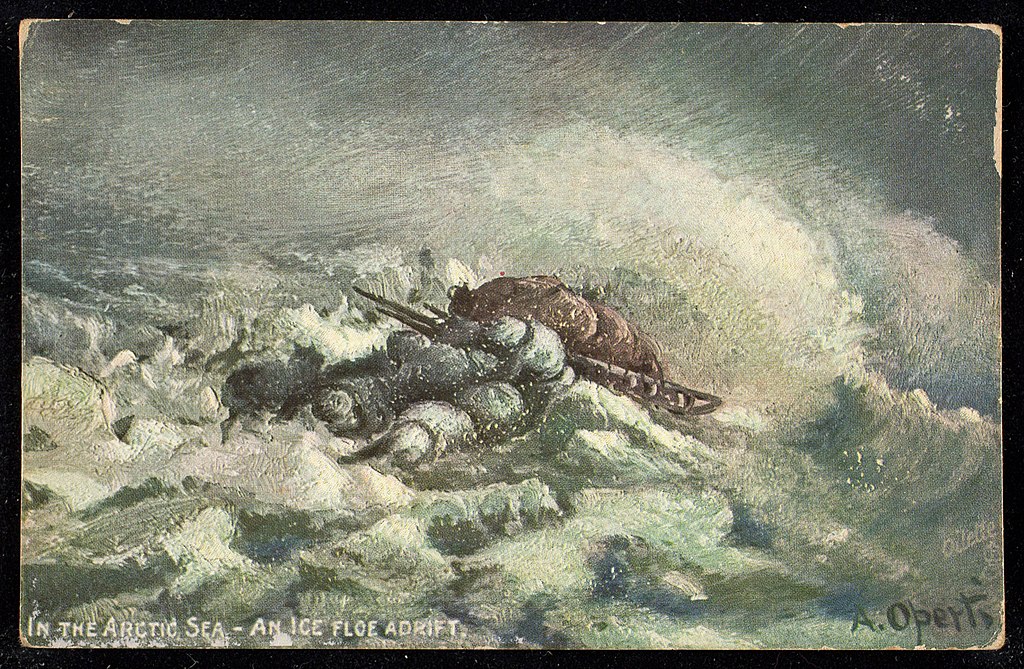 Wreckage adrift on ice – a 19th Century visualisation. It conveys the full horror of the situation.

Attempts to launch the cutter were frustrated by more drift ice but they succeeded the following day.  Due to the ice piled up on the island’s beaches it was only possible to get ashore by abandoning the boat and struggling across the blocks.  They gained the shore by leaping from block to block. The islanders proved hospitable but they regarded the wreck as valid salvage and were to strip it of anything moveable and valuable.  They did however recover the cutter and turned it over to Anthony. Several days later he and his party set out to sail to Cuxhaven in improved weather. They arrived on 22nd February. Given up as lost, their appearance caused amazement to the HMS Proserpine’s other survivors, including Captain Wallis and the men who had remained with him at Neuwerk, and who arrived themselves shortly afterwards. They returned to Britain on mail packets while the diplomat, Thomas Grenville, continued on to Berlin with his party. 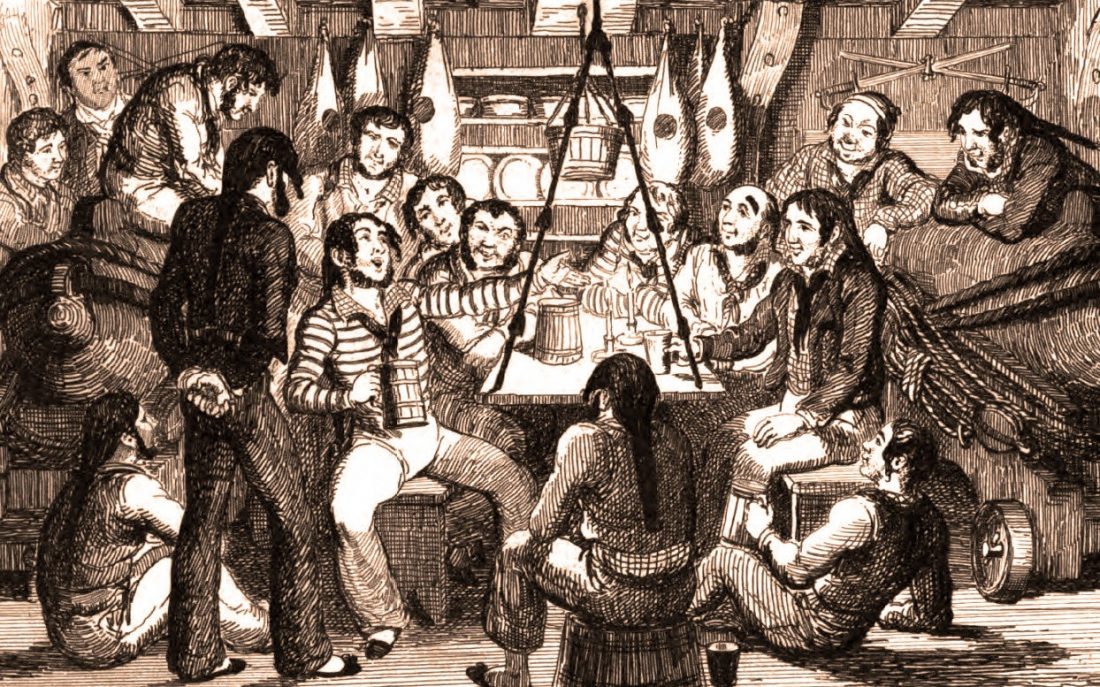 The Royal Navy seamen of the Age of Fighting Sail – rough, coarse and unlettered, but courageous, inventive and invincible in adversity

The most remarkable aspects of HMS Proserpine’s ordeal were the dogged fortitude of officers and crew alike, their inventiveness in the face of one setback after another and their ability to endure privations that by any rational expectation would have been enough to finish most of them. The death toll – sixteen seaman and a woman and her baby – was indeed tragic, but considering that there 187 people on board the frigate it could have been much higher. A Victorian chronicler remarked that “It speaks highly for the discipline and self-control of English seamen, that through the whole course of their adventures not one was heard to complain, not one was known to disobey an order. Their courage never quailed, their resolution never gave way and it was to their serene fortitude and persevering energy that they owed, under Divine Providence, their deliverance from so many perils.”

Sententious though it may sound today, it was a fair evaluation.