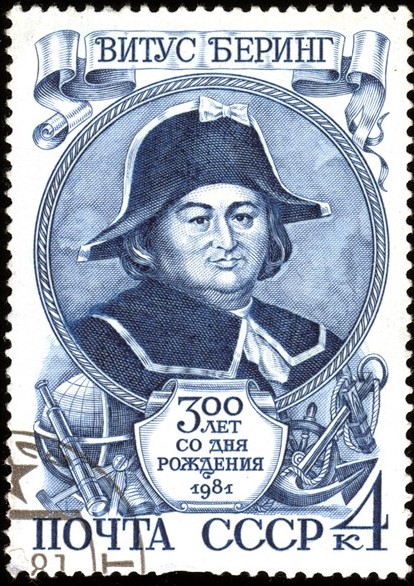 When thinking of the exploration of the Pacific the name that most immediately comes for mind is that of Captain James Cook (1728 – 1779) whose three voyages in the 1760s and 70s added immensely to knowledge of that ocean. These expeditions, meticulously  planned, splendidly resourced and staffed by excellent officers, seamen, cartographers and scientists, were the equivalent in their own day of the Apollo Program. The focus in the first two voyages was on the South Pacific and Australasia but the third, which was to see Cook murdered in Hawaii, focussed on the Northern Pacific and its North American coast line. In the course of this voyage Cook penetrated the Bering Strait between Asia and Alaska and entered the fringes of the Arctic Ocean.

Cook’s achievement was impressive, but the initial exploration of the Northern Pacific had been almost a half-century earlier by a man who had to cope with far greater challenges as regards resourcing and back-up. Though he gave his name to the Strait that separates Asia and America , Vitus Jonassen Bering (1681-1741) is largely unknown outside Russia. His achievement in the face of almost insuperable odds make him however one of the true giants of exploration.

Born in Denmark, and at sea from the age of 18, Bering was one of the many foreign officers recruited by Czar Peter the Great (1672 – 1725) who was rapidly modernising his country and establishing it as a great European power. A key element in his strategy was not only securing a Russian outlet on the Baltic – which became the new capital, St. Petersburg – but the creating from scratch of a navy to defend it.  “The Great Northern War” that raged between Russia and Sweden from 1700-1721 saw Peter’s ambitions realised.

Bering had been with the Russian Navy since 1704 and though he resigned briefly in 1724 he re-enlisted almost immediately, around the time of Peter’s death. Rule of the vast empire now passed to Peter’s widow Catherine (1684 –1727), a woman of obscure and lowly origin who was to prove herself surprisingly capable in government affairs. She inherited Peter’s ambition to have Eastern Siberia’s Pacific coastline and the seas beyond mapped for the first time. At this time Russian settlers, very few in number, were established on only a few small settlement communities on the Sea of Okhotsk and on the vast peninsula of Kamchatka. None of these places possessed port or shipbuilding facilities and any exploration expedition would be expected to build the vessels it needed once it got to the coast there. 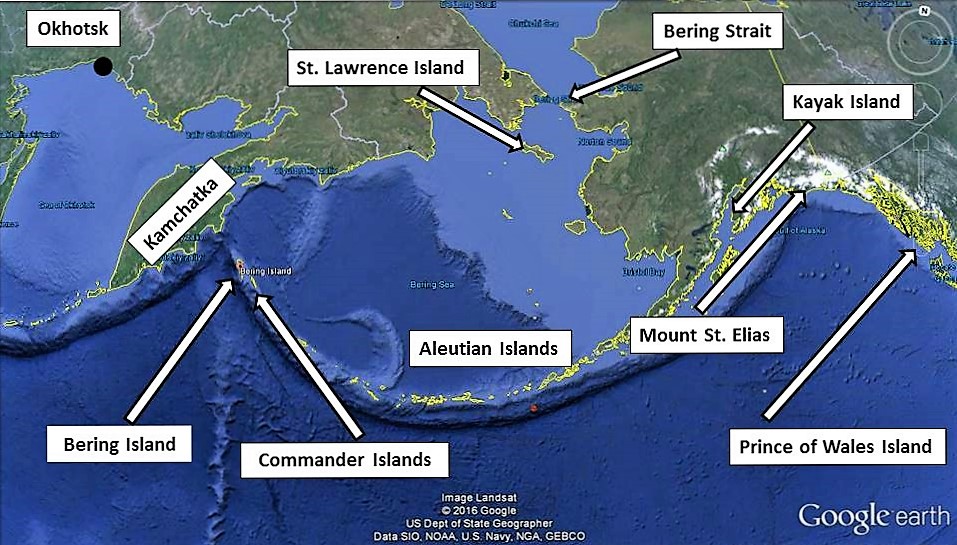 The choice of Bering as expedition leader seems to have reflected some prior experience of distant navigation, notably in the Indian Ocean and the North American East Coast.  Supported by a cartographer and several experienced officers, Bering’s instructions were to move up Kamchatka’s east coast and to determine whether a strait did indeed exist – as was suspected – between Asia and America. Bering’s first challenge was to get to Russia’s Far East. Leaving  St. Petersburg on February 5th, 1725, and crossing Siberia – much of it still all but unexplored –  by horse, foot and boat, and enduring food-shortages and savage winters, Bering, his men and their equipment took two years to reach Okhotsk. By early 1728 they had crossed to Kamchatka, where, on the 4th of April building commenced of a boat called the Gabriel. This was based on the design of a Baltic packet-boat. The challenge of doing so was immense for timber had to be cut down and dressed into planks for construction. It is therefore all the more impressive that this craft was ready enough to set sail some three months later, in mid- July. 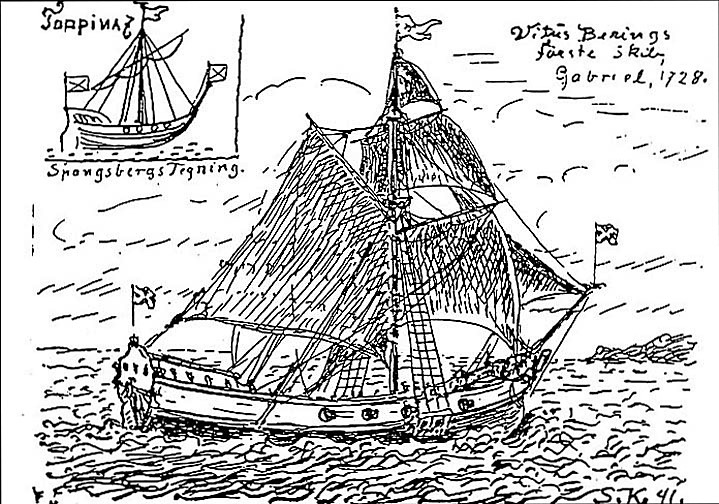 The Gabriel as drawn by Martin Spangsberg in 1827. Picture: Danish Geografisk Tidsskrift

In conformance with his orders Bering crept north-eastwards alone the coast, discovering St. Lawrence Island. He passed through what is now known as the Bering Strait, into the Chukchi Sea. It was still however impossible to say with certainty that the Asian and American landmasses were separate, although it was suspected, but rapidly advancing ice in mid-August forced Bering to the decision to return to Kamchatka. The voyage had lasted seven weeks.  His return overland journey to report his findings in St. Petersburg now commenced,  arriving in early 1730. He was ennobled for his work and his had findings aroused sufficient questions for a second expedition to be necessary to resolve them.

It seems amazing by modern standards that it should have taken a decade before the next expedition, once more under Bering’s command finally set sail from Kamchatka.  (The contrast with the will to mount Cook’s three expedions in a decade is obvious). The intervening years had been occupied by political manoeuvring, command issues and logistics challenges.  Supplies were once more carried across Siberia, a proposal to send them by sea around Cape Horn being rejected.  Two new vessels were constructed at Okhotsk, the Michael and the Nadezhda, in addition to refurbishment  of the Gabriel.  Thereafter three other vessels, St. Peter, St. Paul and Okhotsk , followed – these were to form Bering’s exploration flotilla, he himself on board the St. Peter.

It was 1741 before the new expedition sailed from Kamchatka. The three-ship flotilla was dispersed in a  storm soon afterwards and Bering decided to press on alone. He headed for the American coast and pressed eastwards along it, touching at Kayak Island and sighting Mount Saint Elias, on the  northern end of what is now Alaska’s Panhandle. A second ship got separately as far as Prince of Wales Island before turning back. Scurvy, the cause of which was then not understood, was now however hitting Bering’s crew so badly that they were barely capable of working the ship. There was no option but to turn back towards Kamchatka, discovering several islands of the Aleutian chain in the process. 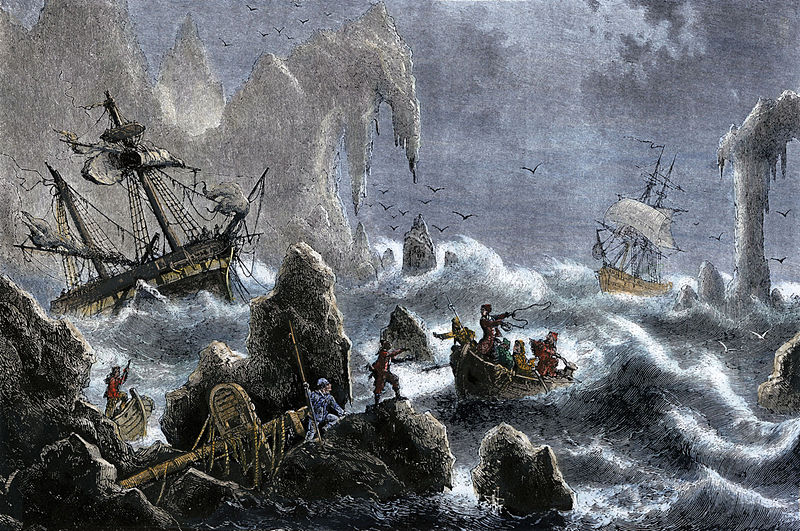 Given the challenges they faced it is surprising that 45 of the St. Peter’s 75-man crew were to survive the freezing privations of the winter, doing so by eating the carcasses of dead whales that had been driven ashore. In the following spring they managed to construct a boat from the wreckage of their ship and in it they reached Kamchatka.Bering was by now too ill to leave his cabin. Nearing the peninsula in early November, at what was later to be called Bering Island, the St. Peter was hit by a storm that drove her towards rocks offshore. Attempts to moor failed but the sea was powerful enough to wash the damaged vessel bodily over the rocks into quieter where it was trapped. Salvation was illusory – the island was barren, devoid of trees, and with little driftwood. With the ship no longer a place of refuge small ravines were roofed over to provide shelter. Many of the scurvy-racked crew died during transfer ashore. Bering himself survived this landing but had to be moved about on a wheel-barrow and he directed survival efforts as long as possible.  He died a month later in a shelter which was already collapsing – it proved necessary to dig him out before he could be formally buried. 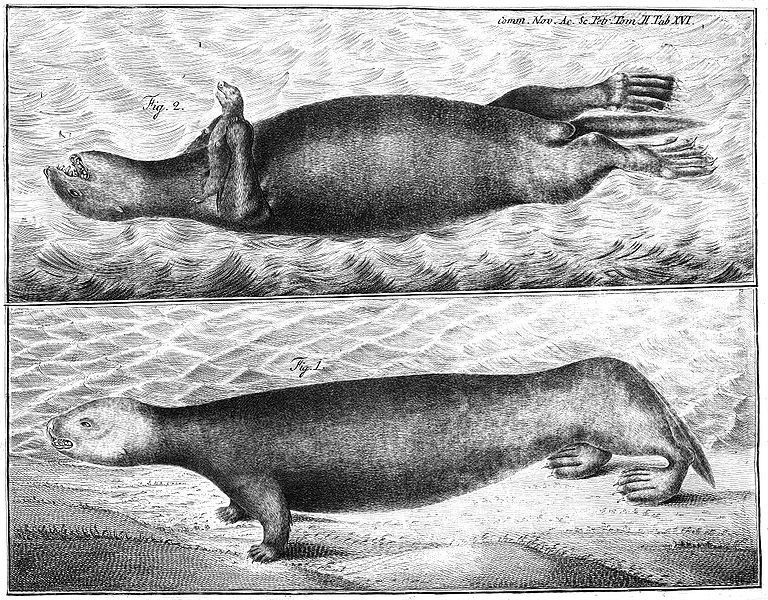 Despite its disastrous cost in human terms, Bering’s last expedition yielded valuable geographical and scientific information.  This included mapping of much of the coast of present day Alaska. The expedition’s German naturalist Georg Wilhelm Steller (1709 – 1746) identified six new species of birds and animals. One of his insights was that the Jay he identified on shore was similar to the already-known American Blue Jay, thereby supporting the conclusion that the continents were separate. He continued his studies while marooned on Bering Island and was subsequently to write a book describing its fauna. Steller’s fate was to be a sad one.  He spent two years exploring Kamchatka after he returned there but because of his sympathy for the indigenous population he was accused of instigating a rebellion. Summoned back to St. Petersburg, he died of illness on the way.

Bering’s discoveries were the impetus for the halting, poorly-conceived, badly managed and under-resourced efforts to establish of a Russian presence in North America. Had more attention been paid to this, and should there have been any clear vision of what could have been achieved, it is unlikely that the Czarist government  would have sold Alaska to the United States for a pittance in 1867. Doing so could have had incalculable strategic and epoch-changing consequences – one of the great “What Ifs” of history.