The Franco-Prussian Battle of Havana, 1870

The Prussian navy, a weak force composed mainly of gunboats, played an insignificant, if sometimes heroic, role in the three wars that led to proclamation of the German Empire in 1871. These were against Denmark (1864), Austria, Bavaria and other German States (1866) and France (1870-71).  Small as it was, the Prussian Navy has a significant role in the earliest chronologically of the Dawlish Chronicles novels, Britannia’s Innocent, which plays out against the background of the Danish War. It is however with an incident in the later Franco-Prussian War that this blog is concerned, focussing on an action fought off Cuba: the small-scale but intense Battle of Havana in 1870. Single-ship actions, in which a lone ship from one navy is matched against a lone ship of the enemy’s, represent some of the most dramatic battles in naval history. The captains and crews cannot depend on support or rescue through the intervention of a larger force and the battle represents the moment in which training, skill and discipline all come together to determine victory or defeat. Some of the most dramatic of such actions – Quebec vs Surveillante (1779), Indefatigable vs. Droits de l’Homme (1797) and Shah vs. Huascar (1877) – and the Naval War of 1812 consisted largely of similar encounters. Each of these actions took place in the context of larger tactical or strategic objectives. 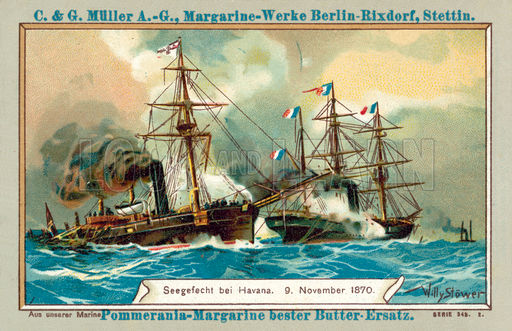 .The Battle of Havana, November 9th 1870.  A card issued by a margarine manufacturer – SMS Meteor on left

By contrast, the more obscure 1870 Battle of Havana was one which was radically different to these, in that it could have had no bearing, however remote, on the outcome of a greater conflict. It was indeed triggered by almost medieval concepts of pride and honour. In 1870 the French Second Empire, under the rule of Napoleon III, entered unwisely into war with Prussia, the pre-eminent power in Germany. Within weeks of the start of hostilities French land forces had been defeated in battle after battle. Napoleon III himself had been surrounded and forced to surrender with an entire army and Prussian forces, supported by other German allies, had invaded Northern France and had brought Paris itself under siege. France had a large navy, Prussia a few ships only, and those small, but the French found themselves incapable of using their powerful modern ironclads to gain any strategic advantage. 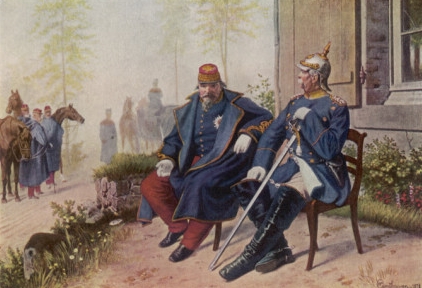 By November 1870, as winter came, siege conditions inside Paris were beginning to bite. Food was running short (even elephants in the zoo were eaten) and political upheaval had resulted in proclamation of a republic. Without agreement by various hostile factions as to what this meant, attempts at breakout by the defenders and of relief by other French forces were unsuccessful. Communication with the outside world was by balloon only. Elsewhere in France efforts were being made to regroup whatever forces had so far escaped defeat – futile efforts which in turn were to lead to yet further defeats.

While Metropolitan France was enduring this agony, a wooden-hulled French sloop of the three-ship Guichen class, the Bouvet, was serving in the more idyllic surroundings of the French West Indies. Launched five years earlier, of 750 tons and 182 feet long, she carried auxiliary sails to complement the 575 hp steam engine that gave her, at best, 10.7 knots. Like many similar vessels in other navies, she was intended for “colonial service” only, with shore bombardment of unsophisticated enemies her most likely hostile duty. This said, she was heavily armed for her size – one 6.4” and four 4.7” guns. 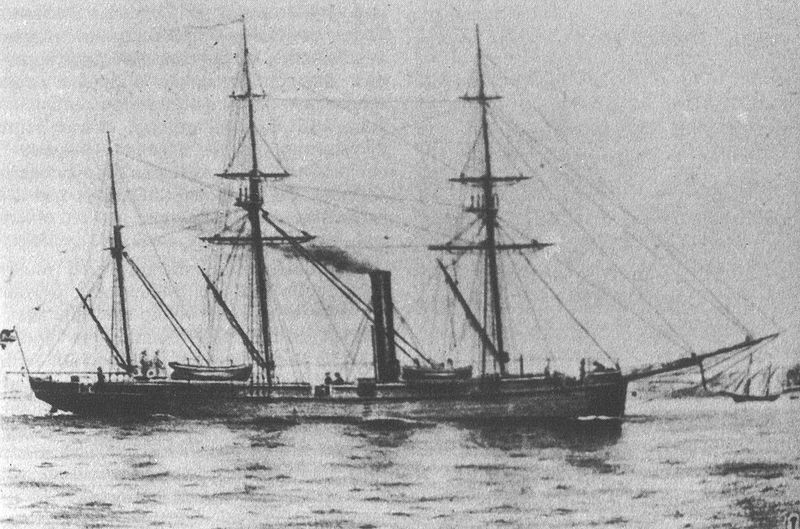 Also in the area was the Prussian gunboat Meteor of the eight-ship Chamaeleon class. She too was wooden-hulled, of 415 tons and 142 feet long. She carried sail as well as steam – a 320 hp engine urged her to just over 9 knots maximum. She was more weakly armed than the French Bouvet, carrying only one 24 pounder and two 12 pounders. On November 7th the Meteor steamed into Havana, then the capital of what was still the Spanish-ruled colony of Cuba. The Bouvet arrived from Martinique a few hours later. Both ships moored and it is easy to imagine the suspicion with which their crews viewed each other. They were however in a neutral port and no offensive action could be undertaken. Also in the harbour was a French mail steamer, the Nouveau Monde. On the following day the Nouveau Monde left Havana, en route for Veracruz in Mexico. Fearing however that the Prussian Meteor might emerge, overtake and capture her, the mail steamer’s captain appeared to lose his nerve and he returned to Havana. The Meteor’s potential as a commerce raider had been recognised – but to realise it she had to get away from Havana, and that meant neutralising the Bouvet. Events now took a turn that seemed to belong more to the days of chivalry than to those of total war in which Prussia and France were already locked. The Meteor’s captain issued a formal challenge to the captain of the Bouvet to fight a battle – not indeed a wise move since the Meteor was heavily outgunned and as both ships were evenly matched as regards speed, making flight unlikely if defeat threatened. The Bouvet duly accepted the challenge and she left Havana to wait for the Meteor outside Cuban/Spanish territorial waters. Since Spain was not a party to the conflict, internationally-recognised neutrality conventions demanded that the Prussian warship had to wait another day before she could leave harbour, 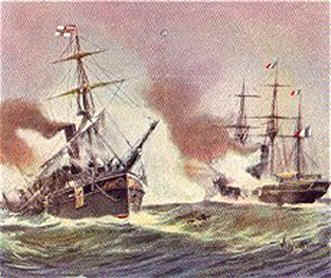 The Bouvet (right) pounds the Meteor 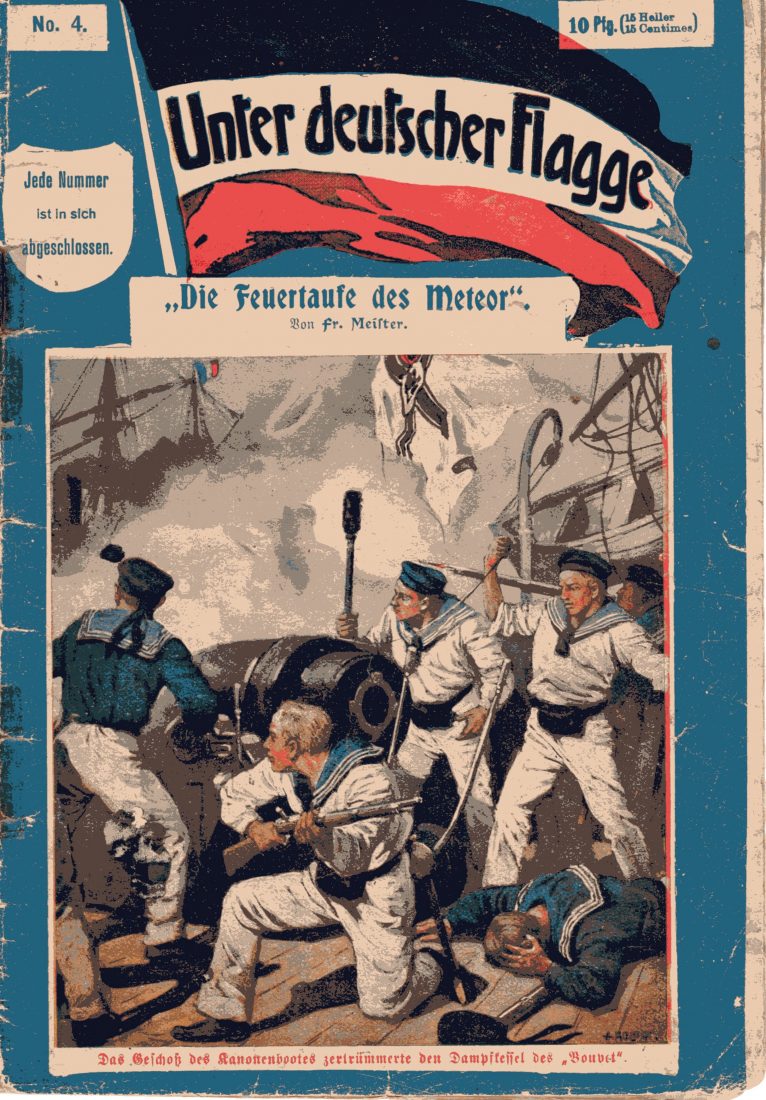 The Meteor duly steamed out from Havana on November 9th. She headed towards the Bouvet, which was waiting 10 miles offshore, just outside the Spanish/Cuban territorial waters. The French opened fire immediately and the Prussian vessel returned it. The action, at very close range, lasted upwards of an hour and the Meteor, not surprisingly, got the worst of it, losing both main and mizzen masts. The Bouvet now moved in to finish the job by boarding but at the critical moment a steam pipe was damaged, leaving her dead in the water. Had the Meteor been more heavily armed this might have been her opportunity to destroy the Bouvet. The French did however succeed in getting their ship into neutral Spanish territorial waters under sail and the struggle could no longer be continued. (This is perhaps the only instance of sail power proving of utility under battle conditions with a steam-powered warship). 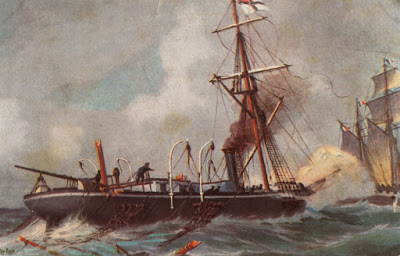 SMS Meteor – dismasted and damaged, but still full of fight

Though both ships survived the encounter, the Bouvet was to come to an equally dramatic end some ten months later when she was wrecked near Haiti. Inconclusive as it was, and without any potential to influence the outcome of the main conflict, the Battle of Havana was one of the few naval encounters of the Franco-Prussian War. It was however of great symbolic significance to the Prussians – who within three months, and with the support of their other German allies, were to proclaim the establishment of the new German Empire – the Second Reich. Humiliatingly for the French, the proclamation was to take place in Louis XIV’s huge palace of Versailles. A fledgling navy had stood up to a larger and longer established one and it had held its own. The courage of the Meteor’s crew had served notice to the world that, however small its naval power might still be, Germany had the determination and skills to make her a force to be reckoned with at sea in the future. And the rest is history…

The Dawlish Chronicles – now up to ten volumes, and counting. Available in paperback and Kindle. Kindle Unlimited subscribers read at no extra charge. Click on the banner above for details of the individual books.