An epic stand against French oared-galleys in British Waters – 1707

When one thinks of battles involving oared galleys one thinks automatically of actions in the Mediterranean. The lot of a galley-slave chained to an oar must have been dreadful enough in the warm and usually calm waters of that sea, but it must have been infinitely worse in the cold, rough waters off the French Atlantic coast and in the North Sea. The galley’s day as a fighting vessel – a long one, stretching back two thousand years – ended in the early eighteenth century and as such they do not figure in most accounts of sea warfare of that era, as “Fighting Sail” reached its apogee of efficiency. I was therefore all the more surprised to come on an account in a Victorian publication of a battle with galleys in the Thames estuary in 1707. This was during the War of Spanish Succession, the last of Louis XIV’s wars, that which began the long decline of French power through much of the remaining century.

Louis XIV (a man much given to his own comfort and luxury, as his creation of the palace at Versailles testifies) appears to have been favourable to use of galleys and ordered that courts should sentence convicted criminals to serve as oarsmen in them as far as possible, even in peacetime. Though the idea was never implemented, he appears to have considered substitution of galley-service for the death penalty. Considering that execution in France this period was by the barbaric method of breaking on the wheel, being chained to an oar would probably have represented a marginally preferable fate.

In August 1707 a French force of six galleys, commanded by a Commodore Langeron, was off the Thames estuary, en route for an attack on the British port of Harwich. It was being guided by a Captain Thomas Smith, an English Jacobite who had taken service in the French navy after fleeing to France following the deposition of the King James II from the British throne. Like many supporters of the exiled king, Smith had a bitter score to settle. The galleys appear to have been some 150-feet long and 22-feet in the beam, carrying sail on three masts and also propelled by oars pulled by some 200 chained slaves, most likely convicts. They carried around 12 guns. Though such vessels were obviously very manoeuvrable in Mediterranean conditions, one wonders just how well their high length to beam ratio would have made them workable in rougher Northern seas. 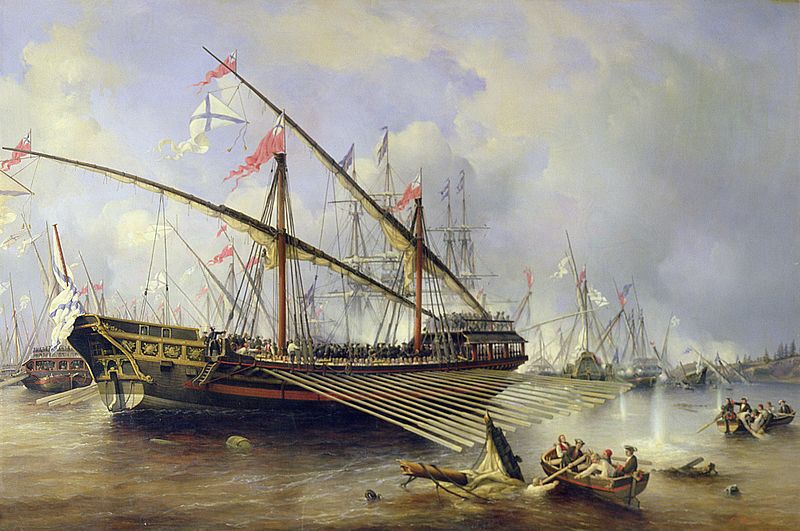 Battle of Grengam (a.k.a Ledsund) in 1720 by Ferdinand Perrot (1808–41). It shows a Russian galley engaging Swedish frigates at close range 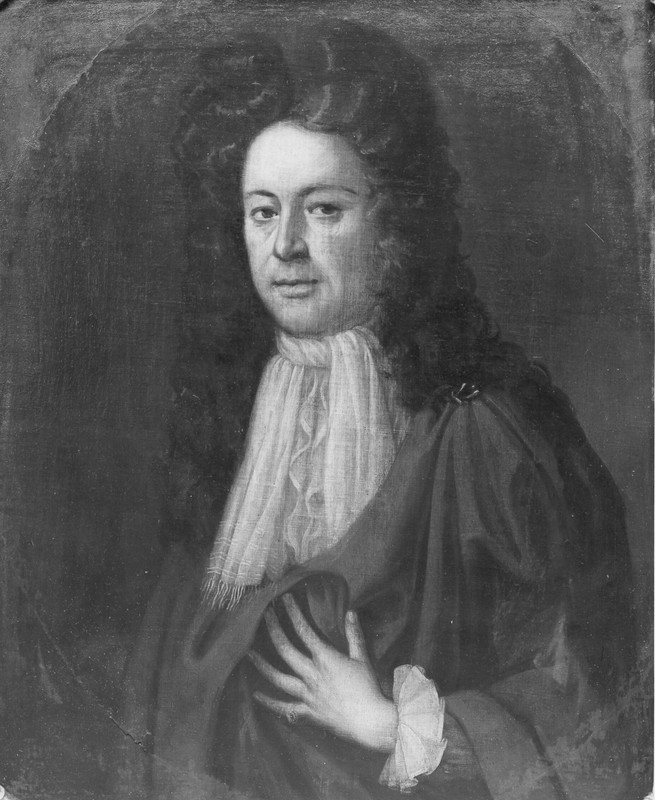 This French squadron ran into a British convoy of thirty-six merchantmen coming from the Netherlands under the escort of a single frigate, the 20-gun HMS Nightingale, commanded by Captain Seth Jermy (1653–1724). On sighting the French Jermy ordered the convoy to crowd on sail and head up the Thames while he turned with his own single ship to meet the oncoming six vessels He must have known the odds to be hopeless – one is reminded of the epic last stands of the Rawalpindi and the Jervis Bay in WW2 – but his intention was to impose a sufficient delay to allow his charges to escape. Commodore Langeron, on the French side, decided to take on HMS Nightingale with his own galley, the La Palme, and pressed on so fast that he left his next ship so far astern as to make it impossible to render direct assistance. As she closed with HMS Nightingale the French galley opened fire but the British frigate withheld hers and made no attempt to escape. Anticipating little resistance, and encountering only irregular fire from the frigate when the range had decreased to pistol-shot, Commodore Langeron decided on carrying her by boarding. 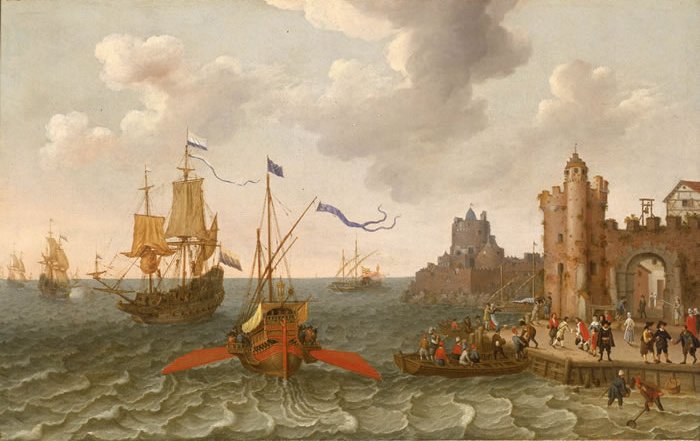 Abraham Willaerts (1603-1669) : “A French Galley and a Dutch men of war off a Port” – the painting shows just how narrow-beamed sugh galleys were and at such risk in rough seas

The preferred method of attack by galley appears to have been to use her superior manoeuvrability under oars to come bows-on to the enemy’s stern, rake her with cannon fire, then ram, locking both vessels together and pouring boarders across from elevated platforms on the foreship. As the La Palme drove on Captain Jermy handled HMS Nightingale so skilfully that at the last moment she avoided her attacker’s viciously-pointed ram and he laid his own vessel alongside her. In the process HMS Nightingale smashed into the galley’s oars – the effect on the wretches chained to them must have been horrific. Only now did Jermy open with a full broadside, sweeping the enemy’s deck, the effect magnified by seamen in the fighting tops dropping grenades. Jermy now launched his own boarding party and a murderous hand-to-hand conflict began on La Palme’s deck.  Commodore Langeron’s next galley in line finally arrived to join the fray and HMS Nightingale’s boarders, outnumbered, were forced back to their own ship, where most were subdued or killed. 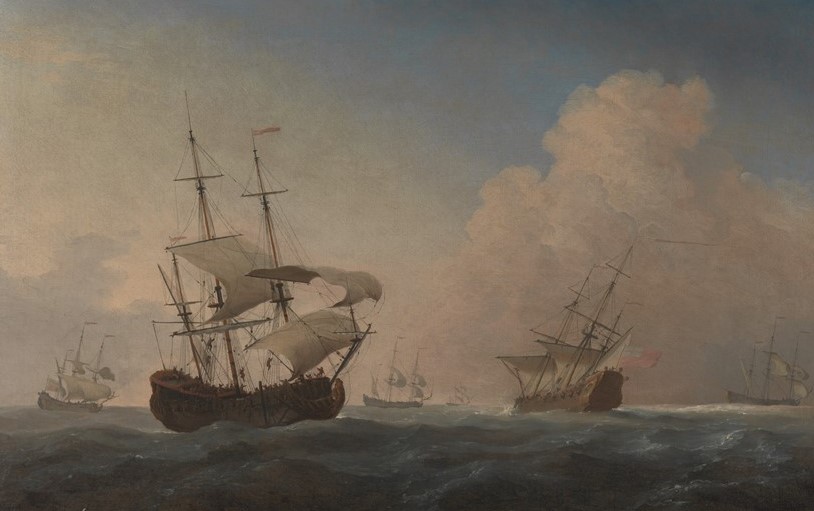 “English warships heeling in the breeze onshore” by Willem v/d Velde the Younger (1633-1707).  Judging from their size, HMS Nightinale would have looked very similar

Captain Seth Jermy had retreated to his own cabin, which gave access to the gunpowder store. He repulsed French attempts to enter – shooting dead a sergeant of marines – and was contemplating blowing up the ship rather than surrender. Only when he saw that his merchant charges had gained safety was he prepared to listen to terms of surrender and to accept them. A French account recorded that when Jermy was brought before the French commander his appearance was unprepossessing –  Commodore Langeron “could not help testifying his surprise at the inconsiderable figure which had made such a mighty uproar – he was humpbacked, pale-faced, and as much deformed in person as beautiful in mind.” Langeron’s reaction could not have been more gracious. He returned Jermy’s sword to him with the words: ”Take, sir, a weapon no man better deserves to wear; forget you are my prisoner, but remember I respect you for a friend.”

Captain Thomas Smith, the Jacobite in French service, seems to have borne himself well in the action and was rewarded with command of the captured Nightingale. He was to enjoy it only for a year, as he was captured by the British and hanged as a traiter for his part in the attempt on Harwich. Jermy was exchanged with a French prisoner fourteen months after the battle and was immediately – and deservedly – appointed to another command. He retired from the navy in 1712.

And what of the men chained to the French oars? The record seems to say nothing of them. The mind recoils from considering their ultimate fates.