Skip to content
Captain Death of the Privateer Terrible, 1756

Captain Death of the Privateer Terrible, 1756

For the commander of a privateer to be named “Captain Death” seems over-theatrical, especially as his ship was called the Terrible (one imagines him an adversary of Johnny Depp’s Captain Jack Sparrow). There was however such a real-life character, even if this name was probably originally De’Ath, as it is spelled today and can still be found in Britain – it may refer to a family originally coming from the town of Ath in Belgium. In 1756, at the beginning of the Seven Years War, Captain Death was to fight a murderous battle against a French warship, the equally appropriately named  Vengeance.

The account that follows draws on a book entitled “Privateers and Privateering” by a Commander E.P. Statham, R.N. and published in 1910. It draws on yet earlier accounts, including testimony from the Terrible’s third lieutenant, but it is short of detail on the exact nature of the ships involved, other than mention the size of their armaments. 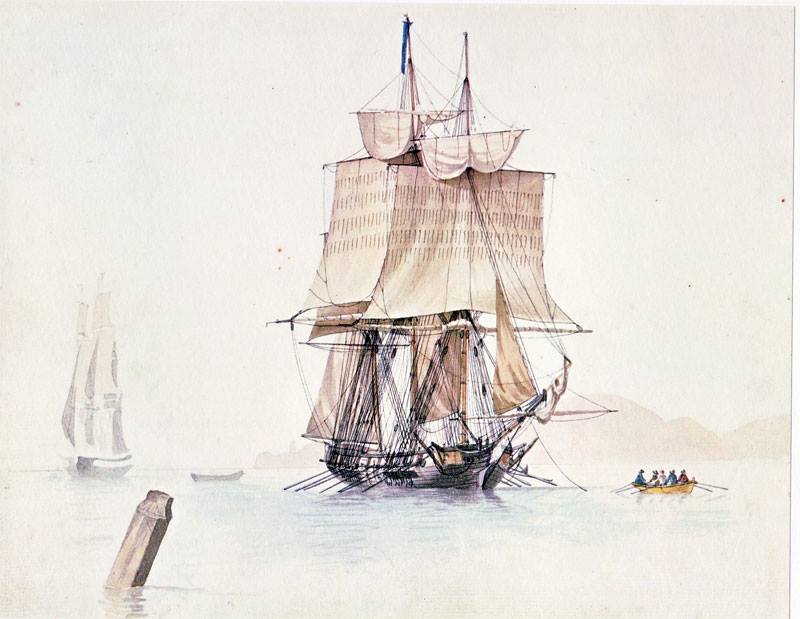 Death’s vessel Terrible carried 26 guns and, judging by her crew of some 200 men, she may well have been a large brig, or even ship-rigged, and possibly a converted merchantman. In late 1756 she was cruising at the mouth of the English Channel off the French port (and heavily fortified base) of St. Malo.  She had already captured an armed French cargo ship, the Alexandre le Grand, on to which Death had put a prize crew consisting of his the first lieutenant and fifteen men. The absence of the prize crew was to be sorely felt on Terrible as she could thereafter put only 116 men to work for, as her third lieutenant later told “the rest were either dead or sick below with a distemper called the spotted fever, that raged among the ship’s company.” This may have been typhus, or plague, and for fear of infection there may have led to reluctance to handle the dead bodies, some of which may have remained below deck. One suspects that lower hygiene standards might have obtained on a privateer than on ship of the Royal Navy, and that this may have lain at the root of the health problem. 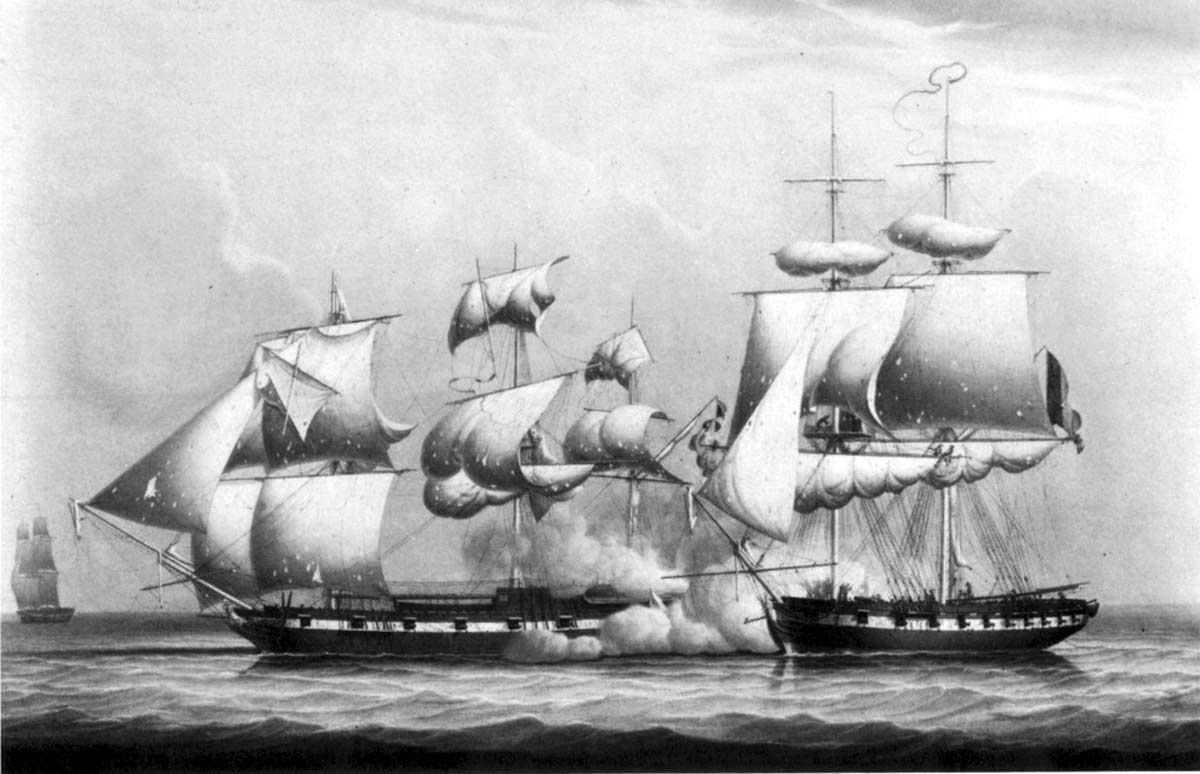 Merchantman Will of Liverpool under attack by a French privateer in 1804 – almost a half century on from the Terrible vs. Vengeance encounter, the essentials were unchanged

At daylight on December 27th, the undercrewed and fever-stricken Terrible was escorting her prize towards Plymouth when two vessels were sighted some twelve miles to the south. The larger steered for the Terrible and her prize and, as the latter was far astern, the Terrible was obliged to back her mizzen-topsail and wait for her, manning her guns as she did. Only when the stranger caught up, flying British colours until then, did she run up French colours and shorten sail. 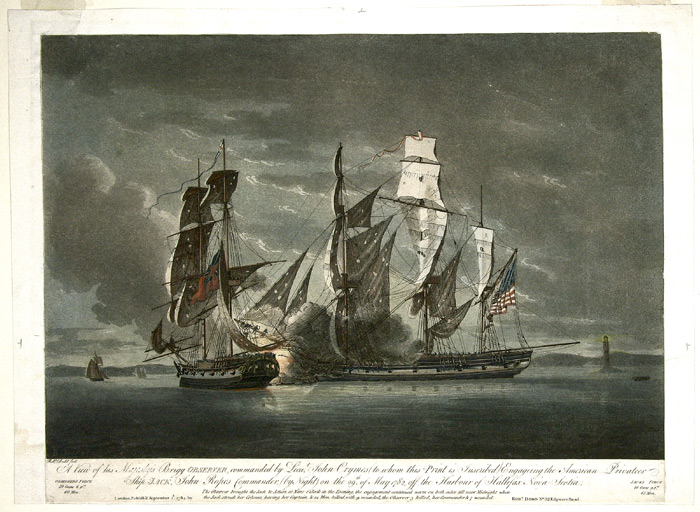 HMS Observer, a brig, engaging the American Privateer Jack by night on May 29th 1782, off Halifax, Nova Scotia”. By Robert Dodd, 1784

The Terrible had her starboard guns manned, but her deep-laden prize, by this time close by, was a clumsy sailer and fell off from the wind. The French vessel, later identified as the 36-gun Vengeance (most likely a frigate, given her armament) and with a crew of some 400, gave the prize a broadside. She then came up close on Terrible’s port quarter and blasted another broadside diagonally across her deck, inflicting severe casualties.  Terrible and Vengeance were so close together that the yardarms almost touched, but in spite of the mauling that Captain Death’s crew had just received, they returned a broadside of roundshot and grapeshot.

For five or six minutes both vessels surged on side by side. Boarding seemed a possibility – despite their losses, the French crew was numerically greater but they held off and a succession of close-range broadsides followed, both sides sustaining heavy casualties. One factor weighed heavily against the Terrible – she was too short-handed by now to man her tops, while the Vengeance had eight or ten small-arms men in each of her own and firing down with muskets. This decided the action. Almost every man on Terrible’s deck was either killed or wounded. In parallel with this the French broadsides continued and took down the mainmast. 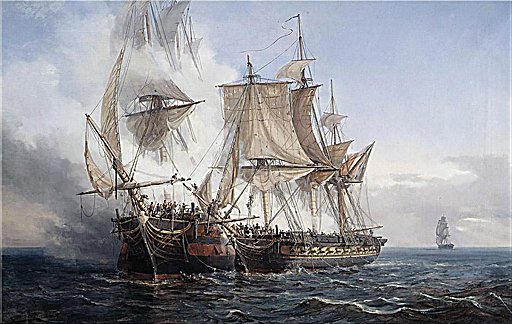 This was too hot to last. Terrible had taken over a hundred casualties. Only some twenty men, and one unwounded officer, were left to fight her.  Captain Death had no option but to surrender but, while the colours were being hauled down, he was killed by a musket ball from one of the Vengeance’s tops.

Terrible’s third lieutenant, who survived, had been wounded in the cheek. His account of what followed was of little credit to the French victors:  “They turned our first lieutenant and all our people down in a close, confined place forward the first night that we came on board, where twenty-seven men of them were stifled before morning; and several were hauled out for dead, but the air brought them to life again; and a great many of them died of their wounds on board the Terrible for want of care being taken of them, which was out of our doctor’s power to do, the enemy having taken his instruments and medicine from him. Several that were wounded they heaved overboard alive.”

Admiration for the Terrible’s heroic defence was widespread but, because she had been a privateer rather than a king’s ship, there a no question of compensation or pensions. A subscription was however raised at Lloyd’s Coffee House for Captain Death’s widow and those of his crew, and for the survivors, who had lost all their possessions.

The Terrible had met her fate at the end of the first year of a long war. There were another six to go.