Skip to content
Making the best of what you have: Germany’s Kriegsmarine in WW2

Making the best of what you have: Germany’s Kriegsmarine and some of the warships it captured

A few weeks ago, I posted a blog article about the varied career of the late 19th-Century Dutch protected cruiser Gelderland. (Click here to read it if you missed it then.) Though long obsolete by 1940, she was begin a new career in very active German service after capture. Very heavily rearmed for an anti-aircraft role, and renamed as Niobe, she was to go down fighting the Soviets in the Baltic in 1944. 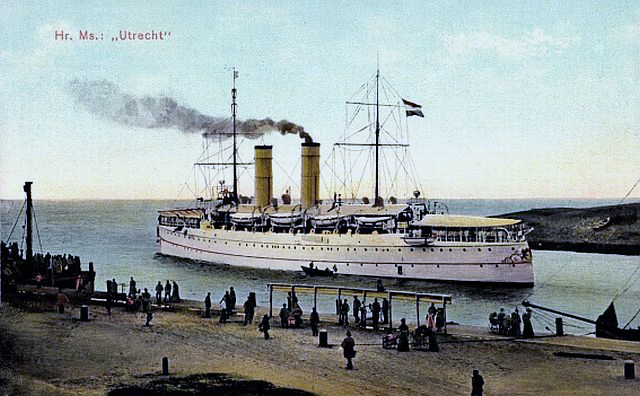 The Utrecht, a sister of Gelderland, showing how the latter would have looked in 1900

After my article appeared, Bob Cordery, a long-time supporter of the Dawlish Chronicles Blog, and himself an expert on matters nautical, contacted me to say he’d previously written an article on the broader aspects of German conscription of captured enemy vessels in WW2. I asked if I might repeat it as a guest blog, and he graciously agreed. You’ll find it below. It’s a fascinating subject and Bob does it full justice. Many thanks to him.

“Making the Best of what you have” – by Bob Cordery

The success of the Blitzkrieg caused major problems for the Germany’s navy, the Kriegsmarine. In a matter of weeks, the coastline it had to defend suddenly stretched from the North Cape to Finisterre and the Bay of Biscay, and its resources – which were already overstretched – were being called upon to prepare for the invasion of Great Britain. Not only did it have to find the ships to mount such an operation, but also the guns to arm them and the crews to man them.

One expedient was to arm small merchant ships, and a batch of five coasters were converted into auxiliary gunboats. The Helene, August, Ost, and West were armed with a 15cm gun, and the Robert Muller 6 was equipped with two 105mm guns. They were all armed with two 20mm Oerlikon guns for air defence, and were ‘armoured’ with 120 tons of sand in outboard compartments (which also served as ballast to compensate for the weight of the armament) as well as thin armour plate along the waterline and around the gun mounts, and sandbags and concrete blocks around the wheelhouse.

These auxiliary gunboats were eventually sent to the Baltic, where they proved themselves in combat against Soviet warships, with the result that a further batch of coasters was similarly converted for 1941 onwards. 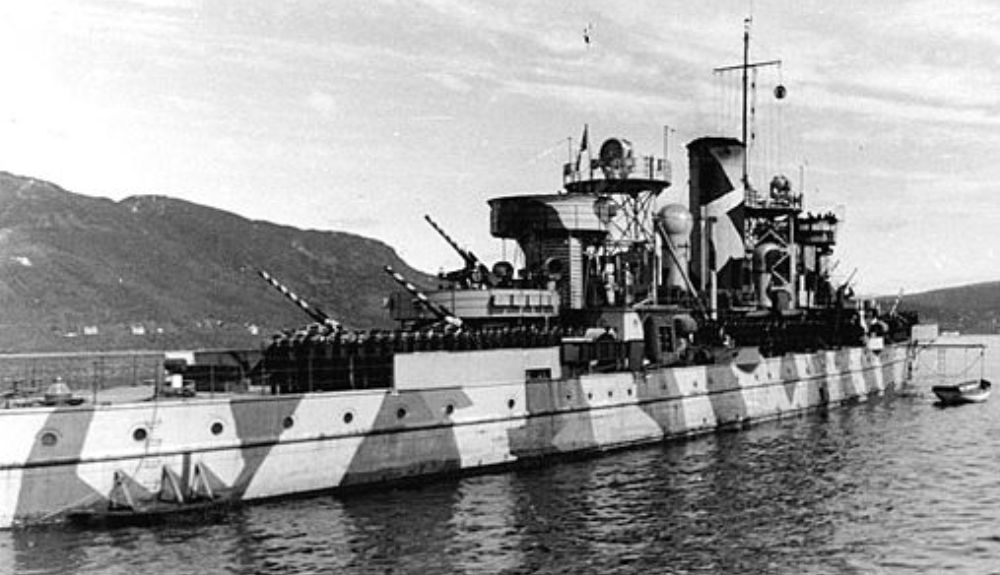 Some of the conversions undertaken by the Kriegsmarine left little resemblance to their forms originals. Above the Norwegian coast-defence ship  Tordenskjold in 1900 and as she looked after conversion to the Flakschiffe Flakschiffe four decades later.

Once it was clear that Operation Sealion, the invasion of Britain, was not going to take place, the pressure to expand the Kriegsmarine continued, but with different priorities. There was an urgent need for coastal patrol and anti-submarine vessels (Vorpostenboot and U-Jäger respectively), and this was requirement was filled by arming captured and requisitioned trawlers, drifters, and whale catchers. There was also a need for larger and more speialist ships, and the Kriegsmarine began looking at the fleets of the nations they had so recently occupied for potential ‘recruits.

The captured Norwegian ships included four very modern small destroyers of the Sleipner-class, named Gyller, Odin, Tor, and Balder, which were renamed by the Germans Löwe, Panther, Tiger, and Leopard respectively. The minelayer Olav Tryggvason was also taken over and commissioned into the Kriegsmarine as Albatros II and then as Brummer.

The Netherlands Navy had taken action to ensure that its ships were rendered unusable by the invaders, but the incomplete destroyer Gerard Callenburgh had been scuttled in shallow water, and she was raised and towed to German for completion. She was renamed ZH-1, and served until she was badly damaged just after D-Day in the Battle of Ushant. The damage was very severe, and she was scuttled by her crew.

The Netherlands also had two cruisers under construction, De Zeven Provinciën and de Ruyter. The Germans tried to complete them, but continual sabotage led to this work being suspended. The ships were completed after the war, and later served in both the Netherlands and Peruvian navies.

Because of the armistice conditions, only French ships in the German occupied zone were taken over by the Kriegsmarine. These included four Flower-class corvettes that were being built in French shipyards. These were the Arquebuse, Hallebarde, Sabre, and Poignard. The first three completed by the Germans and commissioned as patrol boats PA 1 to PA 3, but the Poignard (which was to become PA 4) was destroyed by Allied bombing before she could be commissioned.

The navies of the occupied nations also had many obsolete warships serving in second-line or auxiliary roles, and as the Allied bombing campaign began to grow in intensity, the Kriegsmarine started to look at them as potential anti-aircraft ships (Flakschiffe).

The Norwegian Glommen-class minelayers Glommen and Laugen were captured on 14th April 1940, and were converted into floating flak batteries, and renamed them Nki-01 and Nki-02. The bigger old Tordenskjold-class coastal defence battleships Tordenskjold and Harald Haarfagre were serving as training ships at the time of the invasion, and were renamed Nymphe and Thetis when they were converted into Flakschiffe. In their new role, they were armed with seven 105mm SK C/32 guns in single mountings, two Bofors 40mm guns in single mountings, and nine 20mm anti-aircraft guns, eight in quadruple mountings and one in a single mounting. The Nymphe and Thetis survived the Second World War, and were handed back to the Norwegians thereafter.

Gelderland – as transformed into flakschiff Niobe

The Netherlands Navy had maintained a small coastal defence force up until the First World War, and several of their ships were still in service in 1940. One of these was the Holland-class cruiser, Gelderland. When the German invasion took place, she was acting as a gunnery training ship. The Germans renamed her Niobe, and she remained as a training ship u ntil she was converted into a flakschiff in 1944. In her new role she was more heavily armed than the other converted flakschiff, and carried ten 105mm SK C/32 guns in single mountings, four Bofors 40mm guns in single mountings, and sixteen 20mm anti-aircraft guns, all in quadruple mountings. Niobe was sunk in Kotka harbour, Finland, on 16th July 1944 by aircraft of the Soviet “Red Banner” Baltic Fleet. Her hull was subsequently raised and scrapped in 1953. 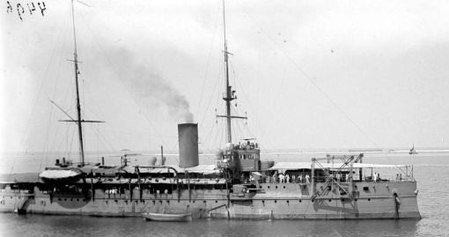 Two other ships of the Netherlands Navy were also seized and converted into flakschiff. These were the former Koningin Regentes-class coastal defence ship Hertog Hendrik – which became the Ariadne in German service – and the Jacob van Heemskerck, which became the Undine. The former had been serving as the floating battery ship (Batterijschip Vliereede) off Vlieland when she was captured whilst the latter was Batterijschip IJmuiden when she was scuttled there on 11th May 1940. 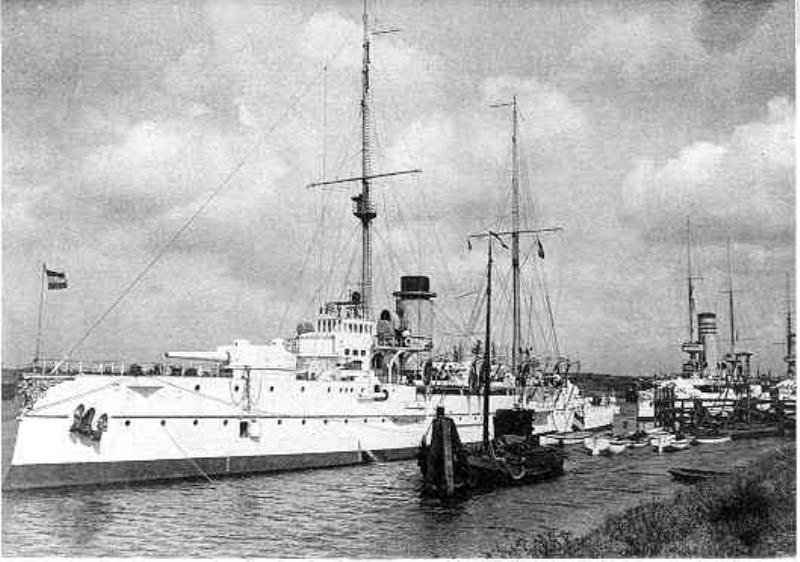 Jacob van Heemskerck seen around 1900. The profile below it indicates just how drastic – and with such heavy anti-aircraft armament – was the conversion to Undine post-1940.

Undine was slightly more heavily armed, and she had eight 105mm SK C/32 guns in single mountings, four Bofors 40mm guns in single mountings, and sixteen 20mm anti-aircraft guns, all in quadruple mountings. After the war, both ships were returned to the Netherlands Navy, where they were used as accommodation ships. The Hertog Hendrik reverted to her original name, and was scrapped in 1969, whereas Undine was renamed Neptunus and was not scrapped until 1974.

The Kriegsmarine eventually took over and commissioned a large number of captured warships, but it would require a much longer blog post to even scratch the surface of that topic!

Many Thanks to Bob Cordery for this splendid post!