Following Britain’s abolition of the Slave Trade in 1807 and end of the Napoleonic Wars in 1815, the Royal Navy was to be involved in suppression of the trade in the North and South Atlantic until about 1860. Earlier blogs (Click here and here) have illustrated the hazards involved in such service. Effort thereafter was shifted to suppression in the Indian Ocean, where the Arab slave traders, who struck into the heart of Central Africa, shipped their victims to markets in the Arabian Gulf.

A Baltimore Clipper, seen here in US Service. As slavers such fast vessels were floating hells.

One consequence of the outlawing of the trade was that slavers vessels now had to be able to outrun naval patrols. Prior to that time slaves were carried in slow, lumbering ships, but now smaller human cargoes were packed into some of the fastest ships afloat of their time. One such preferred type was the “Baltimore Clipper” and, though constructed in the United States, their operators tended to be Spanish, Portuguese or Brazilian. The main sources of slaves for the Atlantic trade were the West African coast – mainly that between modern Ghana and Cameroon – and the Portuguese possession of Angola, further south.

One slave-running Baltimore Clipper was to have a spectacular career in the Royal Navy. Named the Henriquetta, she was captured by the ageing frigate HMS Sybille (herself a prize taken from the French in in 1794) in 1827. She was reported as a brig of 257 tons, 90 feet long, mounting three guns and with a crew of 38 men. Small as she was, she carried 569 slaves in what must have been horrendous conditions and she had landed 3,360 more in Brazil in the previous two years. She was taken into Royal Navy service as HMS Black Joke, the name referring to a lewd song of the time.  Serving as part of the West Africa “Preventative” Squadron., her fast sailing speed now made her the ideal craft for running down vessels like herself and in the next five years, under different commanders, she was to liberate a total of some 4300 slaves in twelve separate actions. These were in some cases quite bloody affairs, as the slavers were usually not only armed, but ready to fight. The maximum number of slaves found on a single ship, the Vengador, was 645. 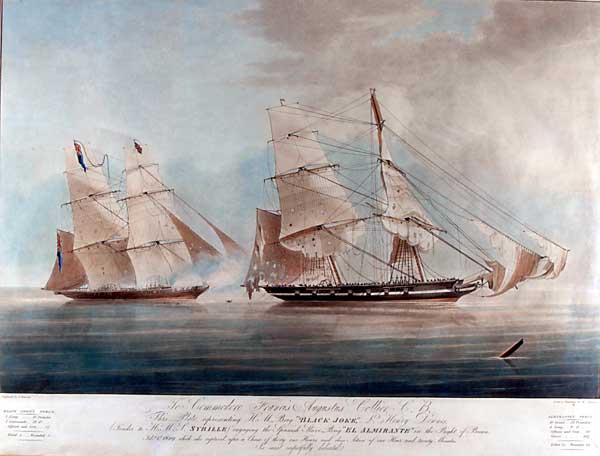 HMS Black Joke in action against the slaver El Almirante on 1st February 1829 The latter was carrying 466 slaves when captured and lost 15 dead (including the captain) and 13 wounded.

One of HMS Black Joke’s most spectacular captures occurred on 26nd April 1831, in the waters between the mouth of the Old Calabar River, in what is today South-East Nigeria, and the island of Fernando Po, now known as Bioko, part of Equatorial Guinea, some 50 miles to the south. She had a crew of about 44 officers and men and her main weapon was a pivot-mounted 18-pounder, supplemented by a carronade. The commander was a Lieutenant William Ramsay.

HMS Black Joke was at anchor at Fernando Po, when Ramsay, learned from the master of a colonial vessel that he had just left in the Old Calabar River. There he had seen a large armed Spanish brig, which he described as the most powerful slaver that had been on the coast for some years. He indicated that she carried one large pivot and four broadside guns, and had a complement of more than 70 picked men. Lieutenant Ramsay headed immediately to Old Calabar and commenced a strict blockade, anchoring Black Joke every night at the entrance of the river, and weighing before daylight, and running out with the land breeze far enough not to be seen from the shore. This this continued for several days until, on the morning of the 25th April a large brig was seen from the mast-head under all sail standing out of the river. HMS Black Joke’s topsails were immediately lowered, so that the stranger came within sight from her deck before he himself could identify her. 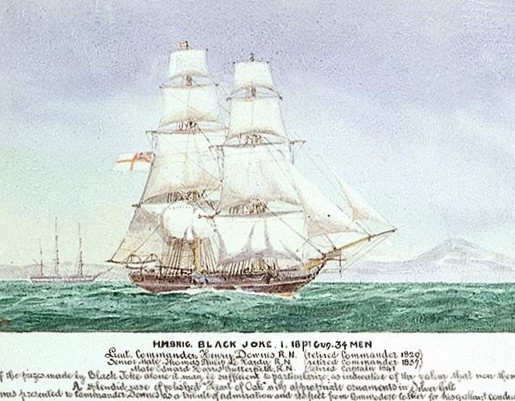 The slaver altered course so as to cross HMS Black Joke’s bow and pass between Fernando Po and the mainland. Ramsay ordered all sail set for a chase and cleared for action. The slaver sailed so well that it was 9 o’clock in the evening before Black Joke could get within range of’ her, close enough to put a shot across her bows and a demand to heave to. This was answered by three of the broadside guns. The wind had died however and both captains resorted to using their sweeps – long oars.  His slow-motion chase lasted until about 1.30 am. next day, the 26th. The slaver now decided to tur and fight, driving back with her sweeps and maintaining an accurate fire on the spars, rigging, and sails of HMS Black Joke.

Knowing that he was outgunned, and that shot smashing into the slaver’s hull would be fatal for the slaves crammed in beneath her decks, Ramsay resolved to board.  A slight breeze had arisen, enough to allow manoeuvre. He ordered the greater part of his mem to lie down and shelter behind the bulwarks from the enemy’s fire as the range closed. Two trusted men were appointed to lash the vessels together, the two guns were loaded with grape, and their captains ordered to fire directly the word “Board” was given.

HMS Black Joke now ran alongside the Spaniard, the guns opened fire and Lieutenant Ramsay, with the mate and ten men leaped across The vessels crashed together with such force that they bounced apart, leaving Ramsay stranded and the remainder of his boarding party still on HMS Black Joke.  He was faced by some 70 armed men on the slavers. Only a single officer remained on Black Joke, a fifteen-year old midshipman called Mr. Hinde. He had the presence of mind to order all hands to the sweeps, pulled alongside and got the vessels lashed together. He then led everybody still on Black Joke, with the exception of a few wounded, across to the slaver. With this reinforcement, Ramsay’s men prevailed, cutting down all who continues to resist. The remainder of the slavers ran below and begged for quarter. 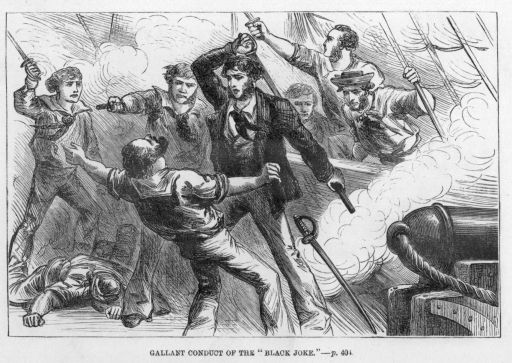 The prize proved to be the Marinerito, a  Spanish brig of 300 tons, mounting five 18-pounders, with a complement of 77 officers and men, of whom fifteen were killed or drowned, four desperately wounded, and several others severely and slightly. HMS Black Joke lost only one man killed. Lieutenant Ramsay, the mate, and five men were wounded. 496 slaves were found on board the slaver, of whom 26 had suffocated, and 107 of the remainder were in such a bad condition 60 of them died after they were landed at Fernando Po. The survivors were taken to liberation in Sierra Leone.

Lieutenant Ramsay was promoted to Commander the next year on the basis of this action. By then HMS Black Joke was reaching the end of her short but useful life. Her timbers were rotting and the decision was taken to burn her. It was a sad end for a ship that had done so much to redeem herself for the crimes committed in her earlier career. 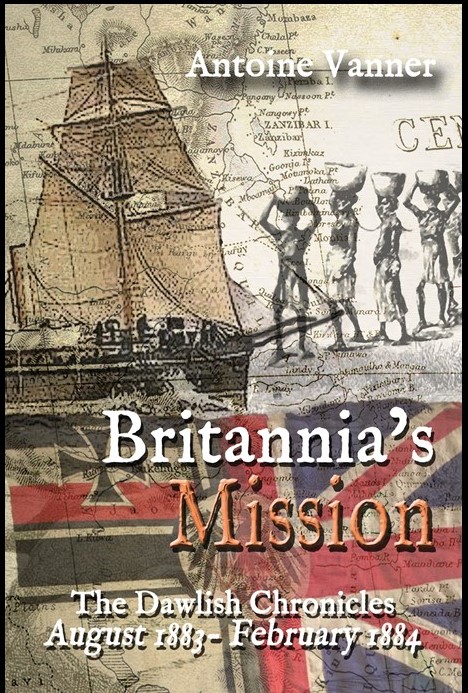 Click on the image to order as a paperback or Kindle. If you’re a Kindle Unlimited subscriber you can red at no extra cost.