Though it is now largely forgotten, one of  Britain’s worst maritime catastrophes occurred  on the River Thames in 1878 , just downriver from London when the excursion steamer Princess Alice was sunk in a collision.

It is strange that some disasters, such as the loss of the Titanic in 1912, live on in the popular memory while others of comparable magnitude in terms of loss of life, such as the sinking of the liner Empress of Ireland after a collision in the St. Lawrence in May 1914, have been largely forgotten. The Empress of Ireland sinking did however claim 1012 lives as compared with 1514 in the Titanic disaster, almost exactly the same percentage, 68%, of those on board in both cases.

Princess Alice in service before the disaster

This line of thinking occurred to me, Antoine Vanner, when I visited the National Maritime Museum in Greenwich and was struck by a contemporary model, as shown below, of the collision of the paddle steamer Princess Alice with the collier Bywell Castle in the Galleons Reach section of the Thames Estuary on September 3rd 1878. Though the accident occurred close to shore the death toll was in excess of 650. I find it strange that such a huge disaster, which occurred practically in London, and which claimed the lives of so many of its citizens, should be totally absent from popular memory and that it has not figured, as far as I know, in any novel, movie or television production (especially taking into account the British fixation on costume dramas). 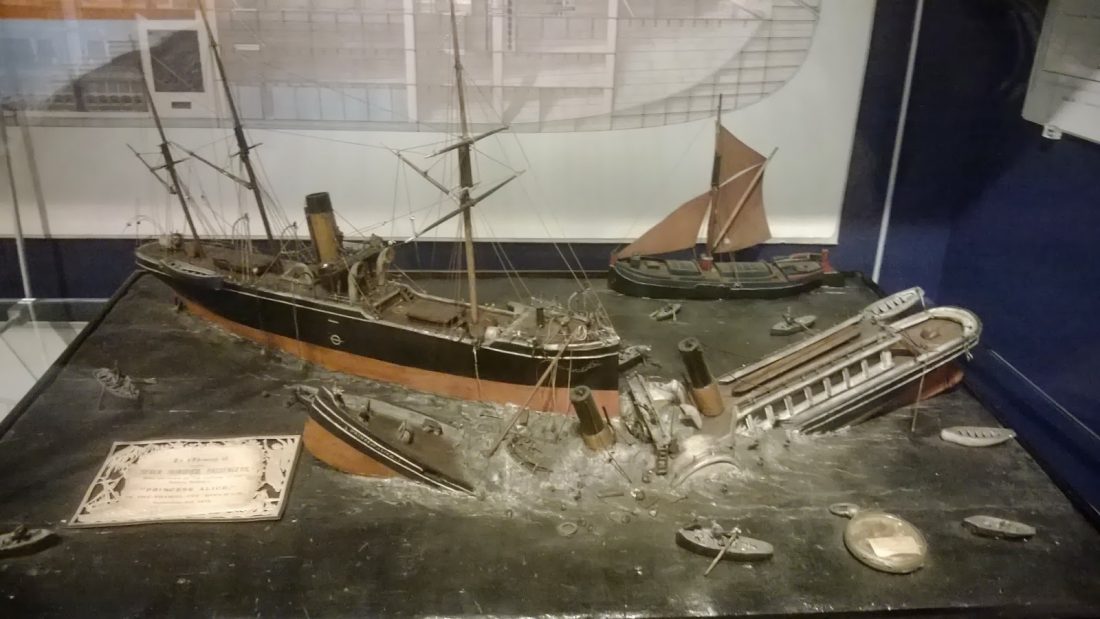 The Princess Alice was a 219-foot, 171-ton, paddle steamer built as the Bute in Greenock in 1865 for ferry service on the Scottish west coast.  She came south two years later, where she was renamed for service as an excursion steamer on the Thames estuary, under a succession of owners. At this time excursions downriver from London were popular outings for a growing urban population that was enjoying increased if modest prosperity.

On September 3, 1878, a Tuesday, the Princess Alice made a routine trip from the Swan Pier, near London Bridge, to Gravesend and Sheerness. For most passengers heading for Gravesend the attraction was the Rosherville Pleasure Gardens there– officially the “Kent Zoological and Botanical Gardens Institution” and in essence an early version of a theme park – which were a favourite destination for thousands of Londoners. The gardens had their own pier to allow docking of visiting steamers. 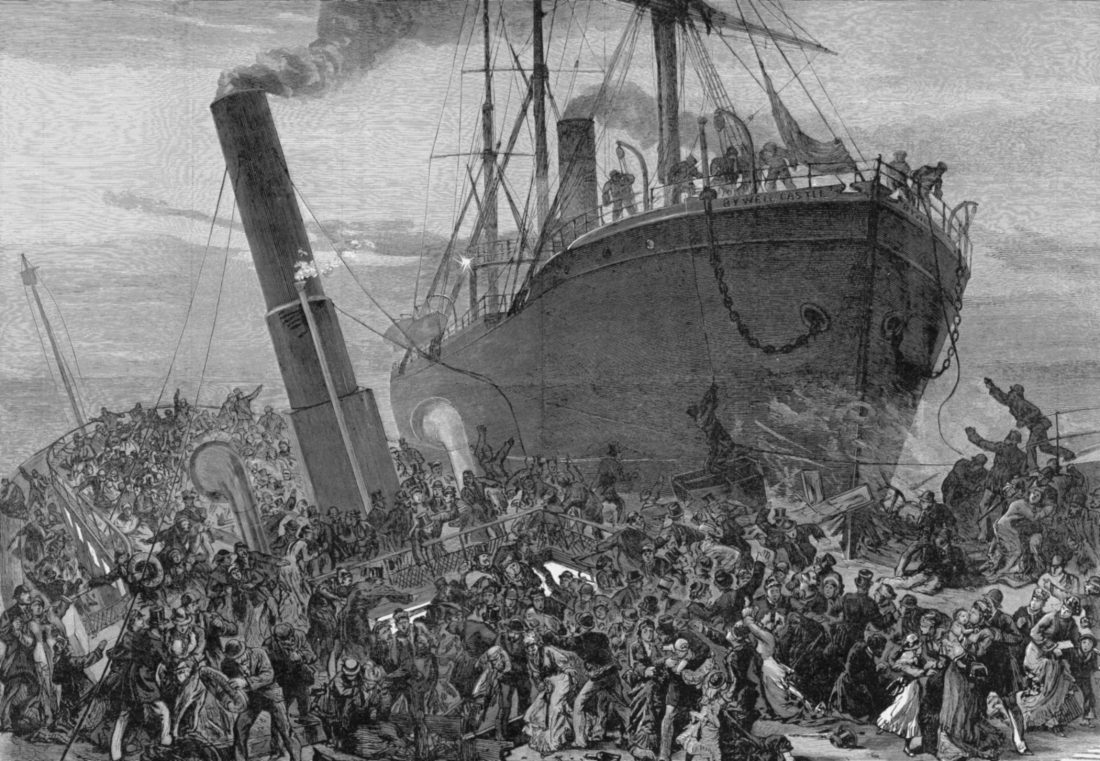 The moment of collision: Princess Alice run down by the Bywell Castle

By 1940 hrs the Princess Alice was on her return journey, laden with over 700 passengers – an amazing number for such a small craft, on which there could have been little more than standing room.  She was within sight of the North Woolwich Pier – where many passengers were to disembark – when she sighted the collier Bywell Castle coming downriver. At 904 tons this was a substantially larger ship than the paddle steamer and was unladen.  Ignoring by the Princess Alice’s captain of the “Port to Port” rule for passing ships in the Thames estuary brought the paddler directly in the path of the collier and though the later did reverse engines, this was not done rapidly enough, making collision inevitable. 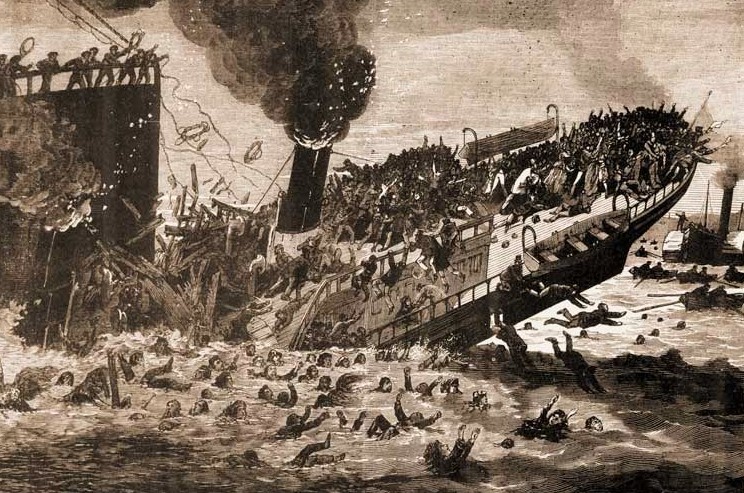 The Princess Alice was struck amidships by the Bywell Castle and she split in two, sinking in under four minutes and before either of its two boats could be launched – inadequate though these would have been for the number of persons carried. Many passengers were trapped below, as would be attested later when the wreckage was recovered. An added horror was the fact that the collision occurred at the point where large volumes of sewage was discharged – according to a contemporary account “At high water, twice in 24 hours, the flood gates of the outfalls are opened when there is projected into the river two continuous columns of decomposed fermenting sewage, hissing like soda water with baneful gases, so black that the water is stained for miles and discharging a corrupt charnel house odour”. It was thought that many who found themselves engulfed in this ghastly sludge died by asphyxiation. 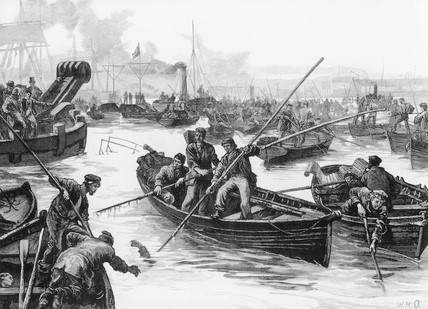 Recovery of bodies from Princess Alice

The exact death toll that resulted is not known with exactitude since there were no detailed passenger list and many bodies may have been washed downriver or buried in the Thames mud. The Thames River Police estimated the death toll as 640 and only 69 persons were saved, mainly through the efforts of the Bywell Castle’s crew, this vessel being scarcely damaged. As the collier was not laden she was however high out of the water, making it difficult to take survivors from the water. The two sections of the Princess Alice were lifted and beached in the following week and unidentified bodies were buried in a mass grave in Woolwich Old Cemetery, where a granite cross still commemorates them. A distasteful aspect of the aftermath was that crowds of ghoulish sightseers came on trains from London to clamber over the wreckage. It appeared that “anything that could be chipped or wrenched off was carried off as curiosities by visitors”. The Princess Alice’s engines were salvaged. The Bywell Castle had its own appointment in Samarra and she was lost with all hands in the Bay of Biscay five years later.

The beached stern-section of the Princess Alice

The inevitable enquiry followed the disaster and the findings not unsurprisingly commented on the overloading, poor seamanship and lack of live-saving equipment on the Princess Alice. No doubt there were many statements at the time that “lessons must be learned”, as is always said in our own time after some dreadful incident, but just as in our own day little practical action seems to have accompanied the hand-wringing. The Titanic disaster was still 36 years in the future and application by then of general insights from the Princess Alice disaster could have lessened the death toll significantly.

I find that the loss of the Princess Alice has an almost unbearable poignancy about it. The victims were of all sexes and ages, and were probably in the main of modest wealth and income – I imagine Mr. Pooter and his wife Carrie of the Grossmiths’ “Diary of a Nobody” as being typical. They were returning from a day of innocent pleasure and had they survived they might well have remembered it as one of the happiest of their lives, spent with those they loved. From this humble pleasure they were plunged – literally – into a squalid maelstrom of filth in which their lives and happiness were torn from them and from the family members they left behind.

And so the final question remains – why has the Princess Alice disaster, on London’s doorstep and with its massive loss of life, faded from popular memory?