The loss of HMS Doterel: Disaster off Punta Arenas 1881

Chile’s Punta Arenas, on the Brunswick Peninsula, to the northern side of the Strait of Magellan, is probably the most southerly city in the world. It was originally established as a penal colony by the Chilean government in 1848 to assert sovereignty over the Strait – at the expense of Argentina, which had similar ambitions. The Chilean claim was finally accepted in a treaty between the two countries in 1881. The Through the nineteen the century, and up to the opening of the Panama canal in 1914 this waterway was of the highest importance allowing passage from the South Atlantic to the Pacific while bypassing Cape Horn. Developments on the Pacific coasts of both North America and South America led to very high levels of traffic through the strait and as such the area assumed greater geopolitical importance than it possesses today.

It was in Punta Arenas that one of the Royal Navy’s most significant peace-time disasters occurred in 1881 when the steam sloop, HMS Dotterel, was destroyed there by internal explosion. The significance of this event was that it was possibly the first in a long series of internal explosions that were to destroy warships in many navies in the next forty years.  Many of the ships involved were very large units. France was to lose two battleships – Iena and Liberté – in the years before World War 1 and during it Britain was to lose several major units – including a modern battleship, HMS Vanguard. Japan was also to lose two capital ships to explosions during the war, as did Italy, which lost the modern battleship Leonardo di Vinci. One explosion – that which destroyed the USS Maine in Havana harbour in 1898 – was to have a major influence on world history. Wrongly blamed on a mine laid by the Spanish authorities, this accident was a trigger for the Spanish-American War, which was decisive in setting the United States on the path to global superpower status. 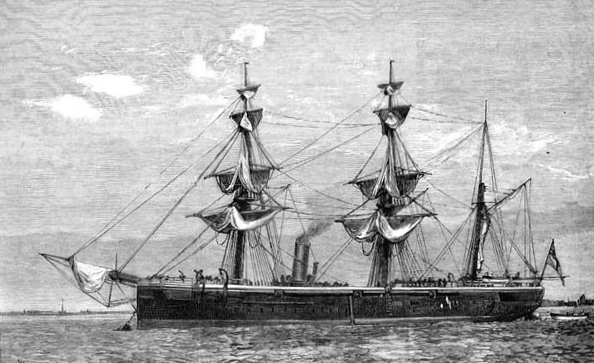 Though the exact causes of the explosions remained uncertain in many cases – not least because the massive loss of life usually involved meant there were few surviving witnesses – the majority were due a low perception of the risks involved in handling and storing modern ammunition. The victims were almost invariably moored in harbour when the accident occurred and in many cases ammunition loading and stowage was in progress. Unstable explosives were not the only cause –a dust explosion during coal loading was a possibility in at least one case. Careless handling of flammable substances also led to accidents. Many of these explosions were regarded as mysteries for many years – in the case of the Maine for decades. In its immediate aftermath the loss of HMS Doterel was also seen as unexplained.

HMS Doterel was one of fourteen sloops of the Osprey/Doterel-class sloops launched by the Royal Navy from 1876 to 1880. They were of “composite construction”, which meant wooden planking over an iron frame. Cheap, slow and reasonably well-armed for their size, they were not intended for fleet employment but rather for support and power projection, often on a single ship basis, on distant colonial stations. Of 1130 tons and 170 ft length they carried a barque rig to supplement their 1100 hp single-screw engines. Under power they struggled to make much over 11 knots but the provision of sails reduced their dependency on coal supplies – a major concern on remote stations – as well as increasing their operational range. They were heavily armed for their size – two 7 in guns on pivoting mounts and four 64-pounders, all muzzle loaders. Though obsolescent, these weapons were simple to operate and more than adequate for the type of shore bombardment needed for dealing with local emergencies or petty uprisings. 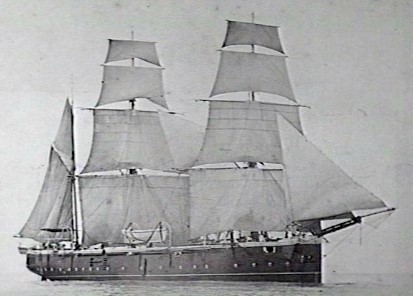 HMS Doterel was a new ship, launched the previous year, when she was sent in early 1881 to join the Pacific Station, which included the western coasts of North and South America as well as China and Japan. Under her captain, Commander Richard Evans, she arrived at Punta Arenas at 09:00 on 26 April 1881. Less than an hour later an explosion occurred in her forward magazine. Eyewitnesses described wreckage being thrown into the air and a huge column of smoke. Broken into two sections, the ship sank instantly. Boats from several vessels in the immediate vicinity, and from shore, rushed to find survivors but out of a crew of 155 only twelve were found, one of them Commander Evans. The force of the explosion had stripped all his clothing away and was indeed so violent that only three complete bodies were subsequently recovered, as well as some body parts. The horror of the situation is underlines by the fact that these remains were loaded into boxes and buried at sea in the same afternoon. An Anglican missionary working in the area, a Reverend Thomas Bridges, subsequently presided over the mass memorial service.

Funeral service held above the site of HMS Doterel’s wreck

In the immediate aftermath several theories were advanced as causes. A boiler explosion, triggering a magazine detonation,  was perhaps the most obvious possibility. Another involved sabotage by Fenians – Irish Republicans – an idea not as bizarre as it might sound since a successful mission had been mounted five years previously to rescue six Fenian prisoners from a penal colony in Western Australia. The key role in this was played by a chartered American whaler, the Catalpa. Another theory considered that the explosion had been caused by a Whitehead torpedo lost by HMS Shah when she has been in the area three years before. 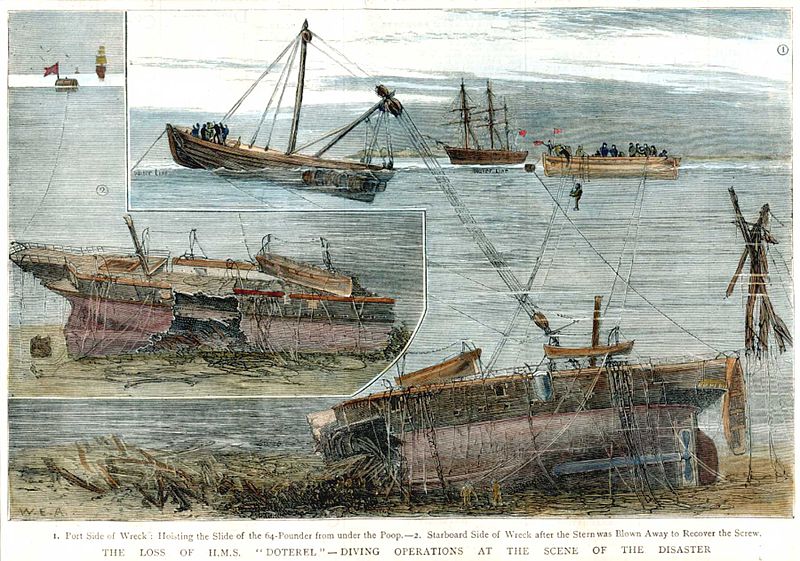 Two Royal Navy cruisers, HMS Garnet and HMS Turquoise were sent to Punta Arenas to conduct salvage and investigation operations. Extensive use was made of divers and this received much coverage in illustrated papers since the “Standard Diving Dress” then represented cutting edge technology. The possibility of a boiler explosion was definitively proven to be false when the boilers were found in perfect condition. The investigations showed that Doterel’s hull had been blown apart, leaving two separate sections, fore and aft. The ship’s guns, screw and other valuable fittings were salvaged. Insights gained provided evidence for formal enquiry at Portsmouth by a scientific committee. This decided in September 1881 that the disaster had been caused by detonation of coal gas in Doterel’s bunkers, and that no crew members were at fault. 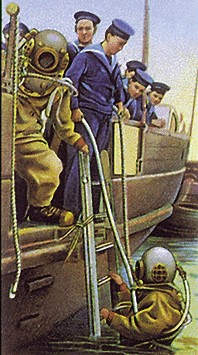 Shortly afterwards, in November 1881, another explosion occurred on a Royal Navy warship, once again in Chilean waters. This was on board HMS Triumph, a broadside ironclad en route to the Pacific Station, as had been HMS Doterel. Though three men were killed and seven were wounded the ship herself survived. It was determined that the explosion had been caused by a volatile substance called xerotine siccative which was employed for mixing in paint to accelerate drying.

It was not until 1883 that the cause of the HMS Doterel explosion was settled. A surviving crew member, upon later smelling xerotine siccative while on another ship, stated that he had smelled it before the 1881 explosion. He explained that a jar of the liquid had cracked while being moved below deck. Two men were ordered to throw the jar overboard. While cleaning the leaking explosive liquid from beneath the forward magazine, the men may have broken the rule of not having an open flame below decks. The xerotine siccative exploded first, letting off the huge explosion in the forward magazine.

A lesson had been learned the hard way. The Admiralty ordered the compound withdrawn from use and better ventilation below decks. One source of disaster had been eliminated, but more remained and numerous other ship losses lay in the future. But that’s another story…

Though HMS Doterel’s career was a short one, a sister of hers. HMS Gannet, is still in existence. She has been restored beautifully and is now on view at Chatham Historic Dockyard in England. She is well worth a visit and provides as splendid insight to life in the Victorian Royal Navy.

The Dawlish Chronicles – the first eight volumes. Click  on the banner below for more details