Skip to content
Forging a partnership- Nelson and Hardy

Nelson and Hardy – forging a partnership

We have encountered HMS Blanche before, in her furious duel in January 1795, in the middle years of the Revolutionary War between Britain and France. In the process she captured the French frigate Pique, off Guadeloupe (Click here to read this earlier blog). Blanche, a 32-gun frigate, had still four years of life ahead of her before she was wrecked in 1799 and these involved considerable drama, in which two of the best known naval heroes of the era, Nelson and Hardy were to play a role. 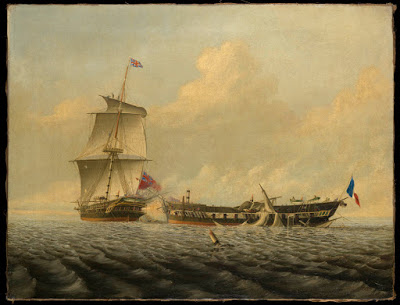 End of the Blanche  (L) vs. Pique action – both ships in states not unusual after such combats – Painting by John Thomas Baines with Acknowledgement to National Maritime Museum, Greenwich

Blanche’s captain, Robert Faulknor, had been killed in the Pique action and was succeeded by Captain Charles Sawyer, who took her to Portsmouth for a refit and thereafter to the Mediterranean at the end of 1795. This theatre was to prove a difficult one for the Royal Navy in the following year, but for Sawyer personally it was to prove a personal disaster.

The Articles of War, under which Royal Navy ships operated, were merciless as regards punishment of homosexual acts, with the death penalty itself reserved for sodomy.  The offence would have been regarded as even more serious if it involved a commissioned officer. It appears that Captain Sawyer had gained a reputation among his crew for such behaviour – accusations were made as regards relations with two young midshipmen, his coxswain and an ordinary seaman. The offence was compounded by the fact that the captain of a ship at sea represented absolute authority and that there was an assumption that this would be exercised fairly and conscientiously. A captain was to be respected, as well as on-occasion feared, and in Sawyer’s case this respect was wholly forfeited as his behaviour was common knowledge on board. Discipline deteriorated to the extent that Blanche’s first lieutenant, Archibald Cowan, wrote about it to the area commodore, Horatio Nelson. This step took considerable moral courage. To criticise a superior in this way was dangerous in the extreme as it could be construed as insubordination and lead to the quick ending of a career. 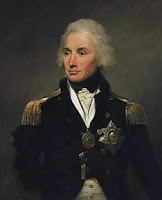 In the event, the matter was handled with considerable pragmatism and adroitness, and indeed with humanity also. A charge of sodomy against a commissioned officer, which would involve embarrassing evidence that would be most likely challenged and debated, would have done nothing for the prestige of the service and might have had a terrible, possibly mortal, outcome for Sawyer personally. The charge brought against him in the unavoidable court-martial was related instead to the breakdown of discipline, specifying “odious misconduct, and for not taking public notice of mutinous expressions muttered against him“.  Sawyer was found guilty in October 1796 and dismissed from the service.

Even before the court-martial was convened a new commander was required for the Blanche. This was to be Captain D’Arcy Preston, who was faced with the challenge of restoring discipline and respect for the chain of command. That he was successful in this was to be shown a few months later, in December 1796, when Blanche once more found herself in action.

During the year Britain’s position in the Mediterranean had weakened considerably in the face of French successes in Italy and Corsica. The Mediterranean Fleet commander, Sir John Jervis, took the unwelcome but realistic decision in October 1796 to withdraw to Gibraltar after evacuating British forces from Corsica and Elba. Nelson was to take charge of the latter operation and to initiate it he sailed from Gibraltar in December with two frigates, HMS Minerve and HMS Blanche. The Minerve had previously been French, having been captured in June 1795 by the frigates HMS Dido and Lowestoffe.  Nelson was on board Minerve and her second lieutenant was Thomas Masterman Hardy (1769-1839), who was to play a very significant role in Nelson’s life – and death – such that the names of Nelson and Hardy are often linked in the public mind. 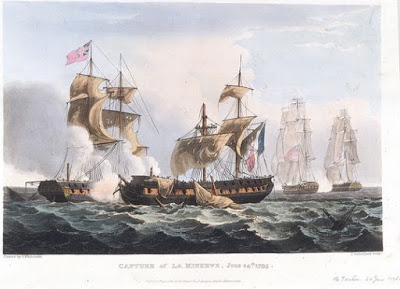 On 10th December,  two Spanish frigates were spotted in the vicinity of Cartagena. These proved to be the Sabina and Matilde, each of 40 guns, fair matches for the British ships. The Sabina was the flagship of Commodore Don Jacobo Stuart, a descendent in the illegitimate line of James II of   England.

Minerve engaged the Sabina while Blanche concentrated on holding off the Matilde. After three-hour combat, during which she lost her mainmast, and had her fore and mizzen badly damaged, the Sabrina surrendered.  The Minerve had also been damaged, but her masts still stood. One has the impression, as so often in the case of frigate to frigate actions, of the British gunnery being markedly superior.

The Sabrina was then boarded by a 40-man prize crew headed by Minerve’s first and second lieutenants John Culverhouse and Thomas Hardy but her damage was such as to necessitate her being towed by the Minerve. At this point, the second Spanish ship, the Matilde, re-entered the fray and attacked the Minerve. She was driven off but a new Spanish force now appeared, the 112-gun ship-of-the-line Príncipe de Asturias and two frigates. Nelson realised that there was no hope of fighting this larger force, especially not if the Minerve had the Sabrina in tow. He took the unpalatable decision of cutting the tow and abandoning the Sabrina and her prize crew to the advancing Spanish.

Lieutenants Culverhouse and Hardy were to be prisoners of war for little over a month. Nelson was eager to have them back and he sent a message through to the Spanish authorities at Cartagena that he was prepared to exchange them for Don Jacobo Stuart. A pleasing statement in the letter was that “I have endeavoured to make the captivity of Don Jacobo Stuart, her brave Commander, as light as possible; and I trust to the generosity of your nation for its being reciprocal for the British officers and men.” The exchange was duly arranged and the two lieutenants arrived in Gibraltar at the end of January 1797.

Both men re-joined Minerve but on 11th February, shortly after leaving Gibraltar to join Sir John Jervis’s fleet, she was pursued by Spanish vessels. In the course of the chase, a seaman fell overboard and Hardy was dropped with a jolly-boat to rescue him. The unfortunate man could not be found and strong currents swept Hardy’s craft far from the Minerve so that his re-capture by the Spanish now became a distinct possibility. Despite the danger of engagement with a superior force, Nelson exclaimed “By God, I’ll not lose Hardy! Back that mizzen topsail!” so that the Minerve could drift down on Hardy’s boat and pick him up. The manoeuvre succeeded and once sail was again made Minerve’s superior speed drew her away from danger. 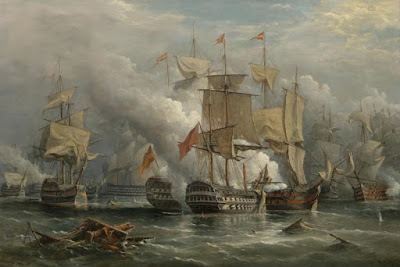 During the night that followed Minerve found herself in fog and sailing between dark shapes. These were those of the Spanish fleet but ineffective lookouts did not detect her. By morning she was clear and on her way to Jervis with news of the enemy fleet’s location. The scene was now set for Jervis’s victory over the Spanish at Cape St. Vincent two days later.

Jervis’s exchanges with Captains  Robert Calder and Benjamin Hallowell on the quarterdeck of his flagship, HMS Victory, when it was discovered that his force was outnumbered almost two-to-one, were recorded:

“There are eight sail of the line, Sir John”

“There are twenty sail of the line, Sir John”

“There are twenty-five sail of the line, Sir John”

“There are twenty-seven sail of the line, Sir John”

“Enough, sir, no more of that; the die is cast, and if there are fifty sail I will go through them”

It was on HMS Victory that Nelson himself was to die eight years later. His admiration of Hardy had grown in this time. At the Battle of the Nile in 1798 Hardy commanded the corvette Mutine and when Nelson sent his flag captain back with news of the triumph he promoted Hardy to command of his flagship HMS Vanguard. When Nelson shifted his flag to HMS Foudroyant he took Hardy with him.

In 1801 Hardy was again to be Nelson’s flag captain and he distinguished himself at Copenhagen by surveying the route whereby the British fleet would enter the Danish anchorage. The relationship continued and in the period leading up to Trafalgar Hardy was not only flag captain on Nelson’s HMS Victory, but de-facto captain of the fleet. It was a meteoric but well-merited rise. 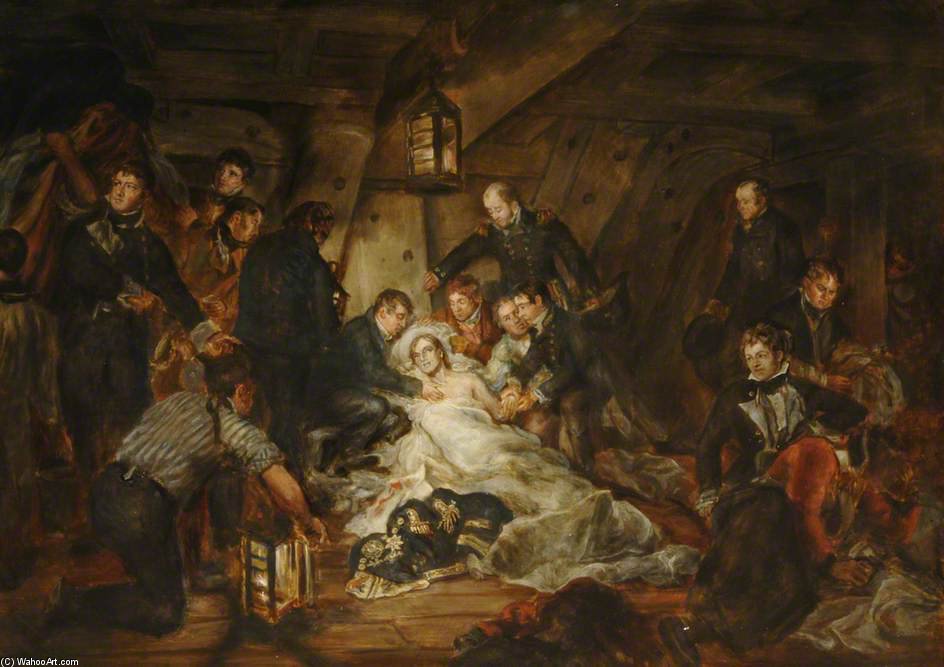 The death of Nelson in the cockpit of HMS Victory – the iconic image: Hardy takes his leave 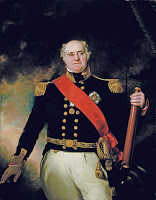 Given the warmth and respect between these two men, it was appropriate that Hardy should be with Nelson when he was shot down at Trafalgar in 1805. As Nelson lay dying in Victory’s cockpit Hardy brought him news of the succession of French surrenders and when they came to part Nelson’s request was “Kiss me, Hardy”, which he did on the cheek. Nelson was by this time fading and Hardy kissed him a second time, this time on the forehead. The dying man asked “Who is that?” and, when told who it was, said “God bless you Hardy” – his last words.

The young lieutenant whom Nelson had once been forced to abandon, and whom he had once risked everything to save on another occasion, had come a long way in nine years. A long, varied and honourable career awaited him after Trafalgar, culminating in his appointment as First Naval Lord, the professional head of the navy, in November 1830.

The (re)capture of HMS Minerve, aground off Cherbourg, July 1803

One other player in this drama was also to have a dramatic further career. HMS Minerve, which had been captured from the French in 1795 was recaptured by them when she ran aground in a fog off Cherbourg in 1803. She was recommissioned in the French Navy as the Canonnière and saw active service in the Philippines, the Pacific and the Indian Ocean.  By 1809 she was considered worn out and was sold at Mauritius for merchant service, now renamed as the Confiance. She was captured by the Royal Navy in 1810 – as she was carrying goods worth £150,000 she was an exceptionally valuable prize and must have made the fortune of many of the crew of HMS Valiant, the ship that took her. Commissioned once more into the Royal Navy, this time as HMS Confiance, she saw little further service and was disposed of in 1814.