The Esmeralda and Chile’s fleeting moment of naval superiority

The “Panama Crisis” of 1885 is forgotten today and indeed blew over quickly at the time. It did however serve to highlight the weakness of the United States’ “Old Navy” and supported the necessity of building modern ships and creating a “New Navy” that would in due course become the most powerful in the world.

When the American Civil War ended in 1865 the US Navy (the “Union Navy”) was one of the largest in the world in terms of numbers of ships and in willingness to adopt new and revolutionary technology. Most of its ships were laid up in reserve thereafter, few new ships were commissioned – sometimes by the subterfuge of “rebuilding” obsolete craft – and by the early 1880s, the US Navy consisted of some 6,000 men and outdated ship designs, many of Civil War vintage. Referred to afterwards as “The Old Navy”, this force was to be transformed into “The New Navy” from the mid-1880s onwards both by expansion and by acquisition of modern ships. Not the least of the impetuses for continuation of this transformation was the embarrassing demonstration at Panama in 1885 that American sea-power in the Pacific was inferior that than of the much smaller Republic of Chile. 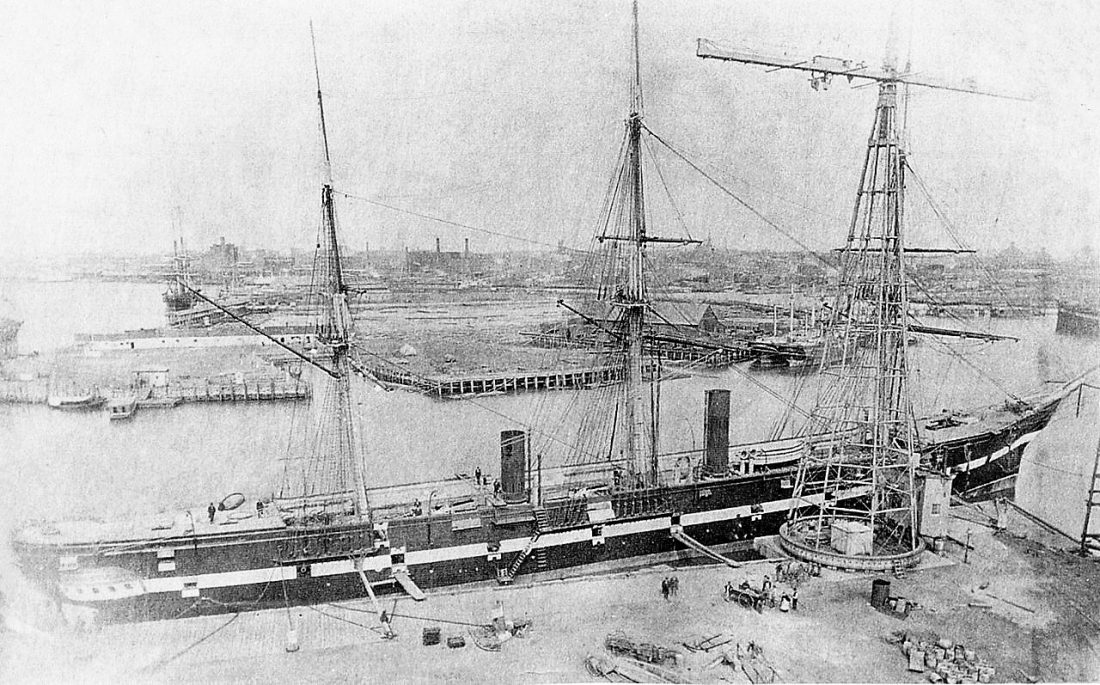 Wooden frigate USS Tennessee of 1865, typical of the “Old Navy”, obsolete when at Panama in 1885

Panama in 1885 was still a province of Colombia, and would remain so until 1903 when – with US support – it achieved independence as a republic in its own right. Preliminary efforts of an ultimately unsuccessful French attempt to construct a sea-level canal across the 40 miles across the isthmus of Panama that separated the Caribbean Sea from the Pacific Ocean were already underway in 1885. Even in the absence of a canal, an existing railway, linking Colón on the Caribbean side and Panama City on the Pacific side, provided an important transit route for mail and passengers travelling from Europe to the west coast of South America, thereby avoiding a sea passage around Cape Horn. Substantial foreign investment, from both the United States and Europe, was involved in the facilities at both Colón and Panama City and in the railway linking them.

Civil strife was all but a constant in the Latin American republics of the nineteenth century. Colombia was no exception and the physical remoteness of the Panama province prompted ambitions for its independence. An opportunity came in March 1885 when the Colombian government removed troops from Panama so as to send them to deal with an insurgency elsewhere in the country. This provided an opportunity for Panamanian separatists to occupy Colón, where a shipment of weapons purchased in the United States was to be landed in April. A wooden American warship, the USS Galena, was however on hand to prevent this, as this would trigger a diplomatic crisis – and perhaps worse – with Colombia. Simultaneously, Colombian forces moved back towards Colón to establish control there. A confused situation ensued – angered by the American refusal to allow landing of weapons, the rebels seized several American hostages, including a naval lieutenant, and threatened to stand them in front of a firing squad. The Colombian army now arrived to retake the town, and fierce fighting followed amid raging fires that each side claimed the other had started. By now a second American ship, the USS Tennessee, a wooden frigate built in 1865, had arrived. 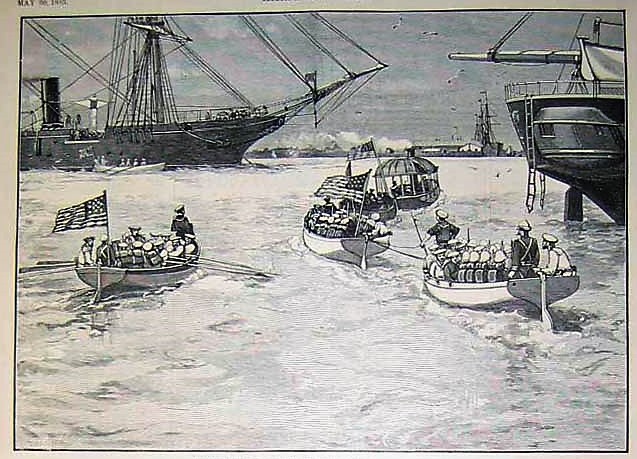 A force of some 700 seamen and marines were landed from USS Tennessee and USS Galena to protect American nationals and property and help restore order. By the time fighting finished – with the Colombian forces once more in control – much of Colón had been burned to the ground. None of the American hostages were harmed and the rebel leader was hanged by the Colombians. Many of the destroyed buildings were the property of American or European companies and the issue of compensation – and who should be responsible for it – was never resolved. 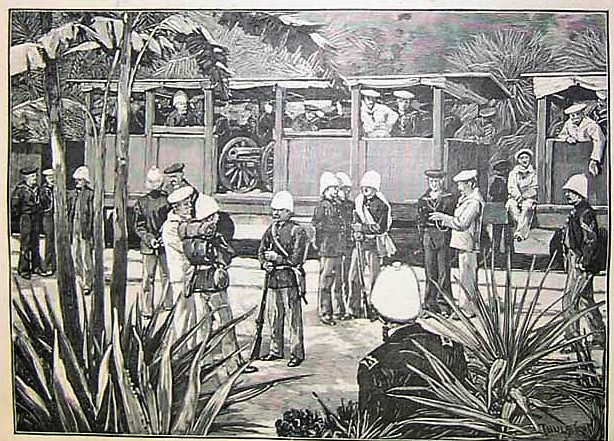 Events in Colón had halted mail and passenger traffic across the isthmus and to complement the American naval efforts on the Caribbean coast another warship, the USS Shenandoah, followed later by three other ships, was deployed to Panama City on the Pacific coast to guarantee order there.

American intervention aroused the ire of Chile, which in the recent “War of the Pacific” (1879-1883) had defeated Peru and Bolivia and had established itself as the most powerful nation on the west coast of South America. Chile’s main concern was that the United States would use recent events to justify the annexation of Panama, perhaps as a first step for further expansion in Latin America. Chile accordingly sent its most recently acquired, and most modern, warship, the Esmeralda to Panama City to represent its interests. By the time she got there the situation had calmed, the United States was showing no appetite for longer occupation, and the potential crisis petered out without hostilities. 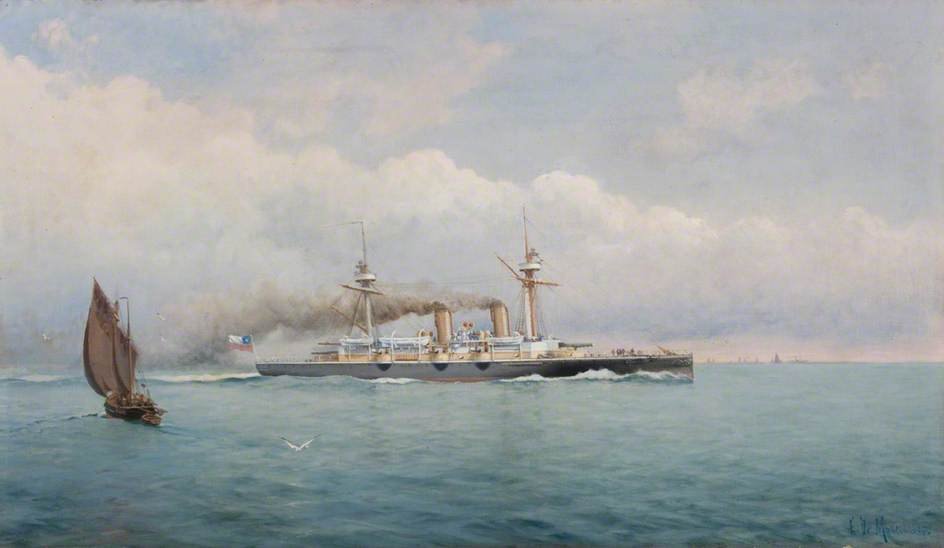 Esmeralda – the world’s fastest cruiser in 1884 (from Wikipedia)

The Esmeralda was a newly-built “protected cruiser”, a warship in which a domed armoured deck protected the boilers and engine rooms. Built by the Armstrong-Whitworth company at its Elswick shipyard in North-East England, she set the pattern for the broad class of “Elswick Cruisers” which were to serve in those of other navies as well as Britain’s for the next three decades. Dispensing with sails and rigging, depending on steam only, their main characteristics were good seakeeping, long endurance and a heavy armament on a relatively small displacement.  Of 2930-tons and 270-feet length, her 6000-hp gave a top speed of 18.25 knots, which made her the fastest cruiser in the world at the time. She carried two 10-inch breechloading rifles – mounted fore and aft – as well as six 6-inch weapons on the broadside, plus small armament.

The comparison of the Esmeralda with the American ships was stark. The USS Shenandoah, which would have faced the Chilean ship in combat had the situation degenerated into a shooting war, was a wooden steamer commissioned in 1862 and had seen service in the Civil War. Armed almost entirely with muzzle-loading cannon of that period, this 1375-ton, 225-foot vessel would have been no match for the Esmeralda. It was easy to imagine this modern cruiser staying easily out of range of the USS Shenandoah’s antiquated weapons and blasting her to matchwood with her own powerful modern breech-loaders. The same applied to the other American vessels deployed, and indeed to the whole US Navy other than a few armoured monitors unsuited to blue-water operations. 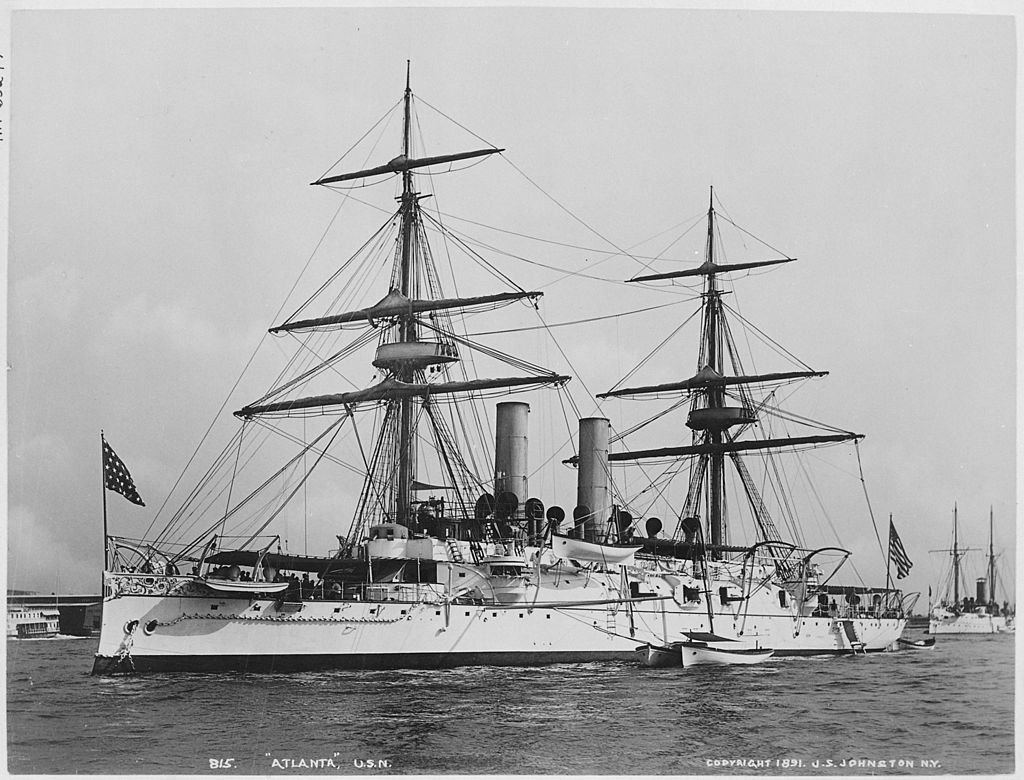 USS Atlanta – the “New Navy” arrives with her commissioning in 1886

The lesson was not lost on American observers and shortly afterwards a publication noted that “The Esmeralda could destroy our whole navy, ship by ship and never be touched once.” The embarrassment was however a brief one.  The first ships of the “New Navy”, the “ABC” cruisers  Atlanta, Boston, and Chicago, would enter service in the next three years and further modern vessels would follow so as to create the fleet that would bring the United States victory in the Spanish-American War of 1898. 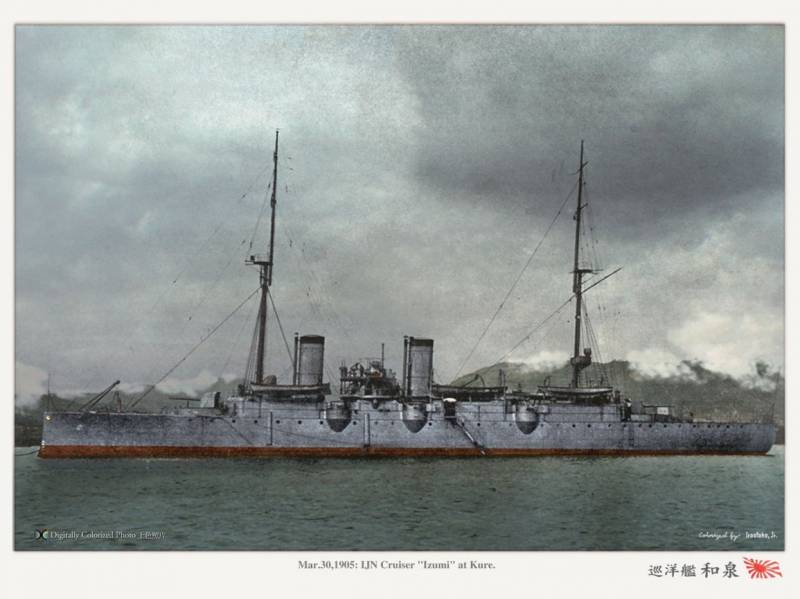 Esmeralda’s subsequent career was to be a dramatic one. During the Chilean Civil War of 1891 she played a useful shore-bombardment role and she was sold to Japan in 1895. The proceeds of the sale were used for part-funding of a much larger replacement, a 7000-ton,468 -foot armoured cruiser, also named Esmeralda, and also built in Britain. Japan’s acquisition was prompted by her need for more ships during her ongoing war with Imperial China. To get around Chilean-neutrality concerns the transaction involved the fiction of an intermediate sale to Ecuador. Named Izumi in Japanese service, the cruiser arrived too late to participate in the main battles of the Sino-Japanese War. She subsequently supported Japanese intervention in China during the Boxer Rising in 1900 and was to be used for escort duties during the 1905-05 Russo-Japanese War. Now ageing, she was however present at the climactic Battle of Tsu-Shima and briefly exchanged fire with the Russian armoured cruiser Vladimir Monomakh. She was withdrawn from active service two years later and scrapped in 1912.

Start the 10-volume Dawlish Chronicles series of novels with the chronologically earliest:

The Dawlish Chronicles – now up to ten volumes, and counting. Click on the banner below for details.

Six free short stories are available for download to your Kindle or in PDF. Access them by registering for the Dawlish Chronicles mailing list – just click on the banner below. You’ll be kept updated on new books and will receive other free stories at intervals.