Fire at sea has always been terrifying when it occurs, but never more so than in the days of wooden ships. Appalling losses were suffered from this cause and in the absence of modern damage-control systems fire brought for warships the extra threat of magazine explosion. It is therefore all the more heartening to learn about the salvation of a Royal Navy warship, HMS Magicienne, from such a fate in 1831, through a combination of cold calculation, iron nerve and superb discipline. 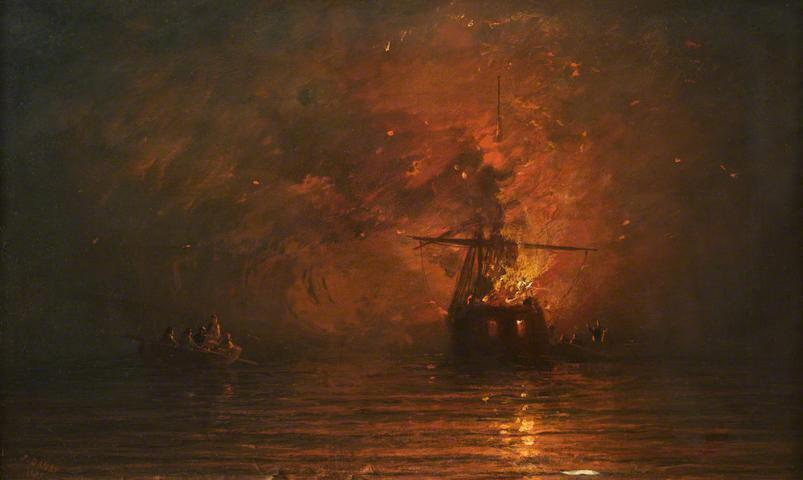 HMS Magicienne was built for the Royal Navy in 1812 as a fifth-rate 36-gun frigate. She was subjected to radical reconstruction in 1831 by being ”razeed” – a process that removed an entire deck. This changed her classification to a sixth-rate, mounting 24 thirty-two pounder guns. Modification appears to have been so successful that, according to one account, “the Magicienne became the talk of the Navy, not only for her sailing powers, but her seaworthiness and internal comfort.” In this form she was to continue to provide good service until being finally broken up in 1845.

Following her rebuild Magicienne was to be commanded for four years by Captain – later Admiral –James Hanway Plumridge (1787-1863), a veteran of Trafalgar who would later see service at senior level during the Crimean War. It was to his cool head – and to that of an un-named marine – that Magicienne was to owe her survival soon after taking over. The story is told in the classic “Deeds of Naval Daring” by Edward Giffard (1812-1867) and though some details are tantalisingly absent – such as the location of the incident – a clear impression given of just how closely disaster was avoided. 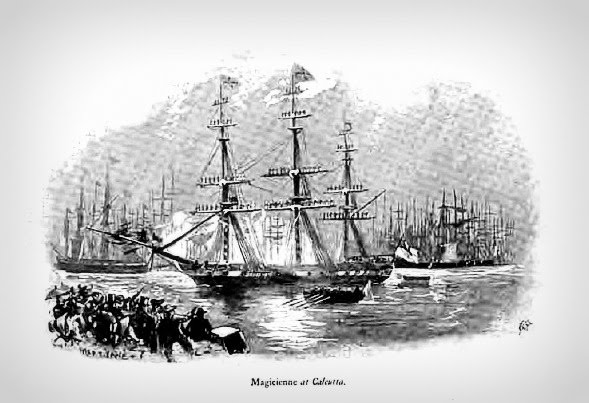 HMS Magicienne at Calcutta, circa 1840

“While several hundred miles far from land, at 4.30 in the morning watch” the ship’s corporal, presumably a marine, was making his rounds. He smelled smoke and traced it to the forward sail room, directly above the magazine. This man showed remarkable coolness and raised no alarm among the men sleeping in their hammocks, but instead went straight to the officer of the watch. He, in turn, roused Captain Plumridge, who rushed on deck in his nightshirt (shades of Jack Aubrey here). Given the location of the fire, explosion could be imminent, but abandonment of the vessel was impossible for the majority of the crew as only the smaller boats were carried on davits while but the larger ones were in-board and lashed down. There was no option but to fight the fire, and for that rigid discipline was essential.

To hide initially the reason for bringing the crew to their stations, and to give an impression of another type of emergency, Plumridge sent a hand aloft to see if a ship was visible to leeward. When the man shouted down that he did not, the captain called back “You do, sir! I can see her!” He turned to the helmsman and asked him also “Do you see that ship, sir?”, apparently so peremptorily that the man said he did and was then told to put the helm over and steer for the fictional ship.

Only when every man was at his station – including armed sentries to guard the boats – was the word given as to fire above the magazine. Only those responsible for fighting the blaze were released from their stations and the remainder were forbidden to look round, to speak, or to whisper to his neighbour. So strictly was this enforced that crew members in the after quarter did not know of the fire until danger was passed, and thought instead that they were participating in an emergency drill. Pumps and buckets were used to pour water into the burning compartment and the fire-fighting party penetrated to the burning sail room where only three inches of wooden deck separated them from the magazine beneath. All this time Magicienne was ploughing onwards under full sail and Captain Plumridge was calmly pacing the open deck in his night attire. So effective were the measures undertaken that the fire, the origin of which was never determined, was extinguished in a mere ten minutes between marine corporal’s warning and the end of the emergency.