Skip to content
1667 AND ALL THAT: Guest Blog by J.D.Davies 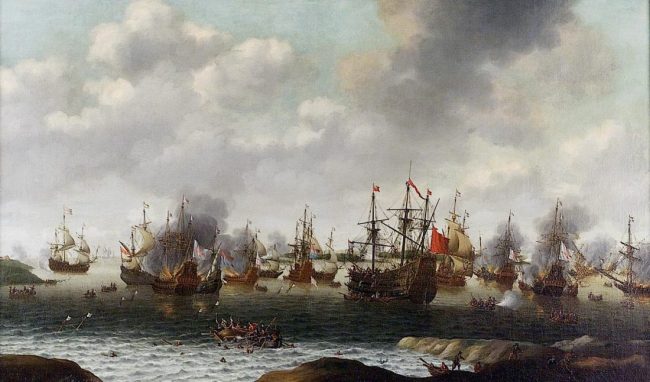 Antoine Vanner: I have been impressed since first discovering the non-fiction and fiction of the distinguished naval historian J.D.Davies, about whom a short biographical note is provided at the end of this article. I’ve been an aficionado of his Matthew Quinton series of naval adventures, which are linked to real events of the Restoration period, and which bring real-life historical characters into colourful, believable life, no less than his fictional creations. Having read, and admired, his latest, eighth volume in the series, The Devil Upon the Wave, I approached him for a guest blog. What he has provided me is a fascinating account of the historical background to his work. Given my own Dutch connections I cannot but be impressed! 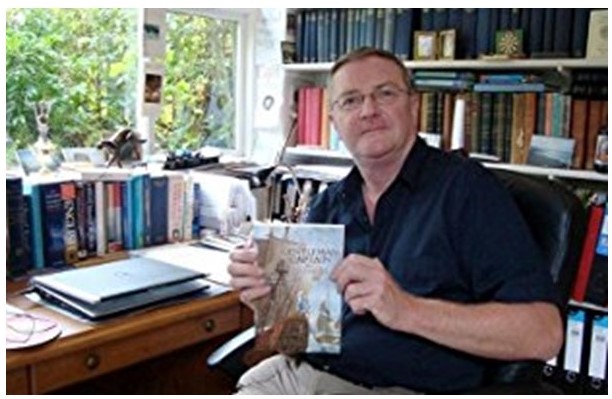 This month marks the 350th anniversary of the signing of the Peace of Breda, which ended the second Anglo-Dutch War. Although the anniversary is being celebrated fulsomely in the Netherlands, the peace itself was a somewhat curious affair, overshadowed by other events – the audacious Dutch attack on the Medway a month earlier, which culminated in the towing away of the English flagship Royal Charles, and the immediate, ongoing crisis precipitated by the French invasion of the Spanish Netherlands, which had begun in May. This posed an obvious strategic threat to the United Provinces of the Netherlands, despite the fact that it was still nominally allied to France, which had fought alongside it in the war against Charles II’s kingdoms. At the exact moment that Louis XIV’s army was crossing the border into Flanders, for example, a combined Franco-Dutch squadron was fighting a little remembered battle against an English force off the island of Nevis. The day after the Dutch towed the Royal Charles out of the Medway, reinforcements under Sir John Harman won a convincing victory over the French at Martinique, burning, sinking or capturing up to twenty French ships – in other words, far more hulls than were destroyed by the Dutch at Chatham. 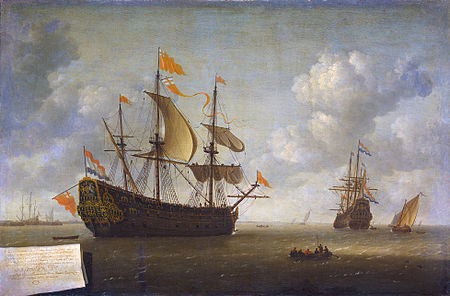 Royal Charles, seen after capture by the Dutch,  painting by Jeronymus van Diest

All of this goes to prove that naval history can be something of a minefield, where making blithe assumptions about the outcomes of battles, or even the nature of entire wars, can be distinctly dangerous. Take the name most commonly applied to this conflict, ‘the Second Anglo-Dutch war’. This is an easy label to apply, placing the conflict into a neat sequence, but it ignores the fact that contemporaries often called it the first war – that is, the first war the monarchy had fought against the Dutch, thus downgrading the Commonwealth’s war against them in the 1650s – and that, for more than half of its duration, the British kingdoms weren’t just fighting the Dutch, but also their allies, the French and the Danes. Quite apart from the vicious actions in the Caribbean, there were some remarkable engagements in European waters. In September 1666, for example, the great French warship Rubis was taken in the Channel in nearly farcical circumstances – she mistook the ensigns of the English White squadron for the Bourbon colours, blundered into the middle of the squadron in question, and was battered into surrender. (She was taken into the Royal Navy as a Second Rate and named the French Ruby, as there was already an English warship of the name.) Then on 17 May 1667, the frigate Princess fought a ferocious battle with two Danish warships off the Norwegian coast. The captain was killed after an hour, followed in short order by the lieutenant and the gunner, but the other officers continued to fight the ship and managed to make their escape. The dying words of her captain, Henry Dawes – ‘For God’s sake, do not yield the ship to those fellows!’ – was used for many years as an example to inspire young naval officers under training. The fight of the Princess was the only major engagement at sea against the Danes, but their contribution to the war could have been rather more memorable if they had managed to bring off their extraordinary scheme to invade and retake the Orkney Islands, which they had lost to Scotland in legally questionable circumstances in 1468! 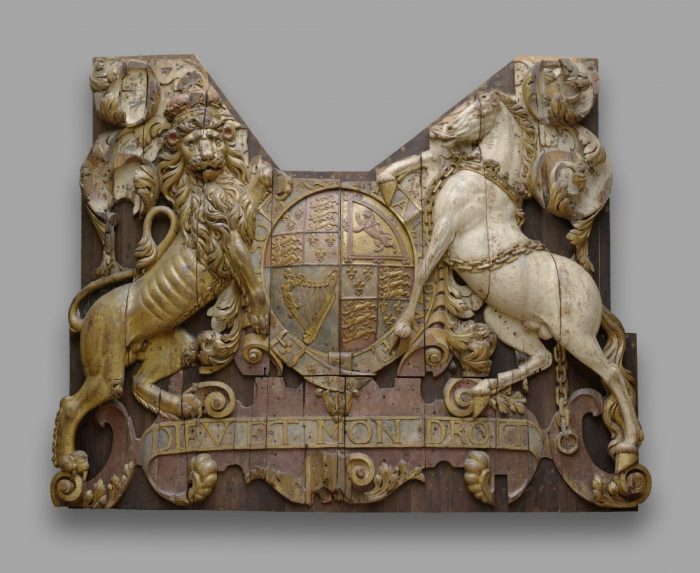 Stern-piece of Royal Charles – on display today (with considerable Dutch pride!) in the Rijksmuseum, Amsterdam

Unfortunately, misperceptions of this war are also perpetuated by those who really should know better. A couple of weeks ago, I visited the Rijksmuseum in Amsterdam, which is currently staging a special exhibition to mark the Dutch attack on the Medway. The introductory display panel claimed that ‘the English fleet was destroyed’ at Chatham, a claim repeated elsewhere in recent weeks – including, alas, in a story on the BBC website which otherwise depended heavily on quotes that I’d given them! While such exaggeration is, perhaps, understandable on the Dutch side, it’s also entirely wrong. True, the ‘headline’ losses are dramatic – one First Rate towed away, another burned, as were two Second Rates. But the greatest First Rate of all, the Sovereign (formerly the Sovereign of the Seas) was safe at Portsmouth, and eight more Second Rates survived the Dutch attack. All of the remaining losses were of Dutch prizes or hired merchantmen, some of which had already been taken out of service in anticipation of the end of the war; if the Dutch raid had not occurred, most of the others would have followed suit within weeks. All of the major losses were replaced in short order – indeed, by 1672 Charles II had six First Rates, double the number he had before the Medway attack – but the Third and Fourth Rate numbers were still what they had been immediately afterwards. In other words, there was simply no need to replace ships that were effectively surplus to requirements anyway; and the cost of the losses at Chatham was as nothing to the £1.5 million or so of damage to the Dutch economy caused when Sir Robert Holmes burned 150 merchant ships in the Vlie anchorage in August 1666, a now little remembered operation which British contemporaries called ‘Holmes’s bonfire’ and the Dutch called ‘the English Fury’. (The ‘bonfire’ provides the backdrop to the first few chapters of my novel Death’s Bright Angel, the sixth title in ‘the Journals of Matthew Quinton’; the fact that it occurred only three weeks before the Great Fire of London led many at the time to suggest a causal connection between the two, a piece of ‘fake news’ that provided me with an irresistible plotline!) 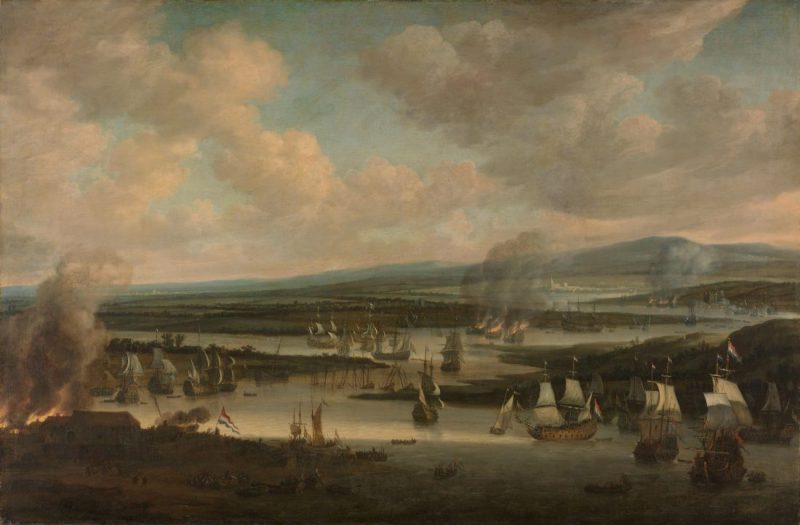 The burning of the English fleet (sic) in the Medway, by Willem Schellinks

Whatever one calls the war, though, and however one assesses the balance sheet of gains and losses, the fact remains that its results were not necessarily what one would have expected them to be. Despite the crushing victory they had won at Chatham, the Dutch conceded astonishing lenient terms to Charles II, so much so that he had medals produced which effectively proclaimed him the victor of the war. The Dutch won no significant concessions over the English Navigation Acts, which banned them from many of the carrying trades to England and her colonies, and they conceded the principle of saluting English colours upon the high seas. To modern eyes, though, perhaps the most remarkable term of the Peace of Breda was that the Dutch preferred to insist on the return of Surinam than on that of another colony they had lost during the war – New Amsterdam, which had been renamed New York. But cutting away 350 years of hindsight, it’s possible to see that Surinam, with its lucrative sugar crops, was simply a far more valuable prize than the relatively insignificant little colony on the banks of the Hudson.

… and more about J.D. Davies himself

David Davies (J D Davies) writes both naval fiction and non-fiction. He won the Samuel Pepys prize and Latham medal in 2009 for Pepys’s Navy: Ships, Men and Warfare, 1649-89, and was shortlisted for the Mountbatten Maritime Literary Award in 2014 for Britannia’s Dragon: A Naval History of Wales. He is vice-president of both the Society for Nautical Research and the Navy Records Society, is a former chairman of the Naval Dockyards Society, and is a Fellow of both the Royal Historical Society and the Society for Nautical Research. He is also the author of the bestselling ‘Journals of Matthew Quinton’, a highly acclaimed series of naval historical fiction set in the Restoration period, beginning with Gentleman Captain; the latest title, The Devil Upon the Wave, set against the backdrop of the Dutch attack on the Medway, was recently published by Endeavour Press.

Click here for details of The Devil Upon the Wave and click on the image below for details of the entire Quinton series and Mr. Davies’s historical works. 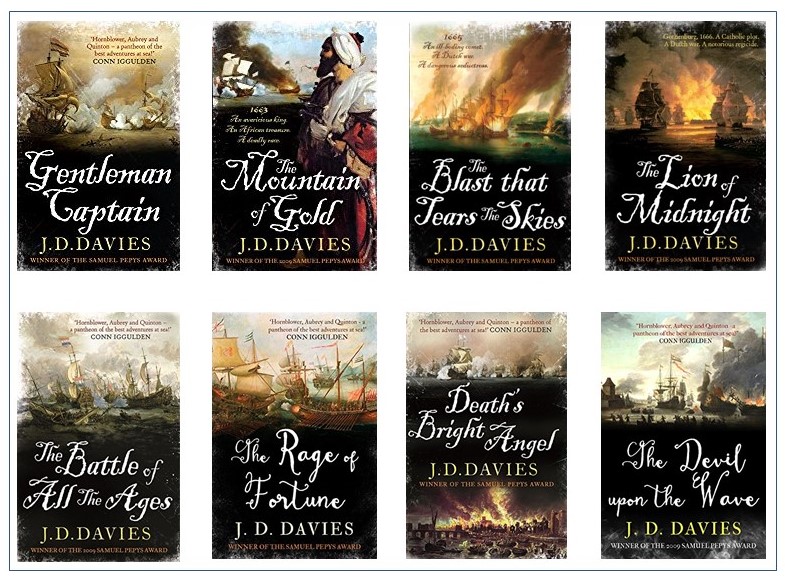