The Russian Navy’s Varyag at Chemulpo 1904:

A heroic last stand and a strange afterlife

Heroic “last stands”, whether on land or at sea, are always fascinating – and inspirational – but the case described here was exceptional in that the ship involved was to survive into a quite amazing afterlife. 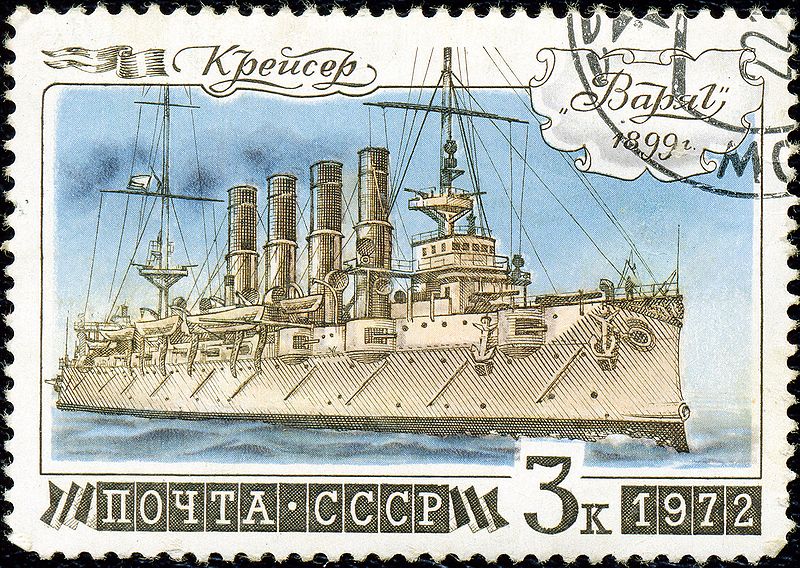 Soviet commemorative stamp for the Varyag, 1972

The Varyag was a protected cruiser built by the Cramp yard at Philadelphia for the Imperial Russian Navy, entering service in 1901. 425-ft long and of 6500 tons, she carried twelve 6-in guns as well as smaller weapons and her 20,000 hp gave her a top speed of 23 knots. It is notable that the 6-in weapons had no protective shields for their crews, perhaps reflecting the idea that cruisers of this type were more likely to be employed as commerce raiders than to engage in combat with other warships. The Varyag was assigned to the Russian Far East Fleet, with its bases at Vladivostok (iced-bound in winter) and Port Arthur (ice-free all year round). 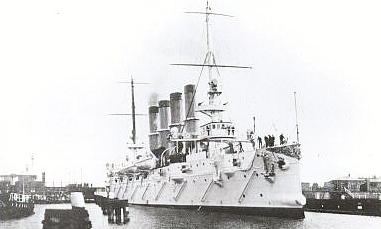 The Varyag, as completed

In early 1904 tensions between Russia and Japan were at breaking point over territorial ambitions in Korea and Manchuria. The main Russian naval force was concentrated at Port Arthur and hostilities commenced on February 8th when Japanese torpedo boats attacked the Russians at anchor there – without a declaration of war, a foretaste of what was to happen at Pearl Harbour thirty-seven years later.  The Varyag was not present however – she was at the Korean port of Chemulpo, today known as Inchon – together with a small but heavily armed gunboat, the Korietz (1334 tons, two 8-in, one 6-in and smaller weapons). The Japanese cruiser Chiyoda was also based at Chemulpo where she and the Varyag eyed each other suspiciously for several months. 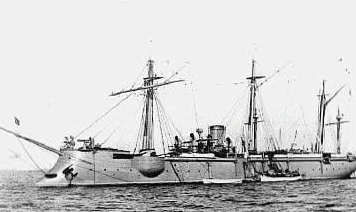 The Korietz – heavily armed for her size

Chemulpo (later known as Inchon), on the Korean west coast and some 30 miles from the capital, Seoul, was vital to the Japanese since was it was through this port that army forces and supplies were to be landed to support the invasion of Manchuria. A very large Japanese force was accordingly sent under Rear Admiral Uryu Sotokichi to take Chemulpo  – this included six cruisers, some eight smaller vessels, three transports and 2,500 ground troops. The most powerful Japanese vessel was the 9700 ton armoured cruiser Asama, built by Armstrong Whitworth in Great Britain, and with four 8-in and fourteen 6-in guns. The Asama , when commissioned in 1899, was considered the fastest, most heavily armed and most heavily armoured cruiser in any navy. The other Japanese cruisers were of the “protected” rather than “armoured” type, but were all well armed.

The Asama – feared and respected in her time

The first indication that the Japanese might be about to mount a surprise attack came when a Russian transport, the Sungari, arrived at Chemulpo on February 7th 1904, reporting sighting of a large Japanese force. This was Uryu’s squadron. On the following day, February 8th, the Russian gunboat Korietz was ordered from Chemulpo to Port Arthur to report the sighting and to request instructions. The Korietz spotted the Chiyoda outside the roadstead and, mistaking it for a fellow Russian ship, loaded her guns for a salute. On closing in, the crew of Korietz realized their mistake and in the ensuing confusion the guns were discharged. Chiyoda responded by launching a torpedo. The Korietz retreated back to Chemulpo harbour. And the Chiyoda rendezvoused with Admiral Uryu’s force. The Russians do not appear to have regarded the incident as anything but a mistake and were not alarmed enough to go on a war footing. 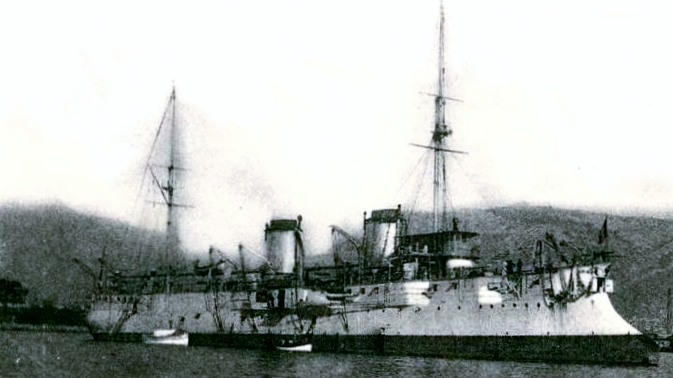 The French cruiser Pascal – a neutral at Chemulpo. Her boats picked up survivors.

The Varyag and Korietz were not alone in Chemulpo. Also present were the British cruiser Talbot, the French Pascal, the Italian Elba and the American Vicksburg, all neutrals. Not only were the Varyag nor Korietz protected by international law while they were in Chemulpo, a neutral port, but any attack on them was likely to inflict damage on the four neutral warships as well, with incalculable diplomatic consequences.

At 1800 hrs on February 8th the Japanese troopships, covered by several cruisers, moved into the port, tied up close to the Varyag, and landed their troops. The disembarkation was completed by 0300 the following morning.  During these hours the Japanese had separately unleashed their sneak attack on the Russia’s naval base at Port Arthur . Throughout the Japanese landing activities at Chemulpo, the Russians took no action and indeed continued normal activities with no sense of urgency.

Admiral Uryu now had a letter delivered to the captains of all warships anchored at Chemulpo. It was in perfect English, reflecting the fact that the Japanese Navy was modelled on the Royal Navy, and that many of its officers had trained in Britain. The message read as follow:

I have the honour to notify you that as hostilities exist between the Empire of Japan and the Empire of Russia at present I shall attack the men-of-war of the Government of Russia, stationed at present in the port of Chemulpo, with the force under my command, in case of the refusal of the Russian senior naval officer present at Chemulpo to my demand to leave the port of Chemulpo before the noon of the 9th of February, 1904, and I respectfully request you to keep away from the scene of action in the port so that no danger from the action would come to the ship under your command. The above-mentioned attack will not take place before 4 o’clock p. m. of the 9th of February, 1904, to give time to put into practice the above-mentioned request.

If there are any transports or merchant vessels of your nationality in the port of Chemulpo at present, I request you to communicate to them the above notification.

I have the honour to be, sir, your most obedient servant,

A separate message was sent to the Varyag, as reproduced below. 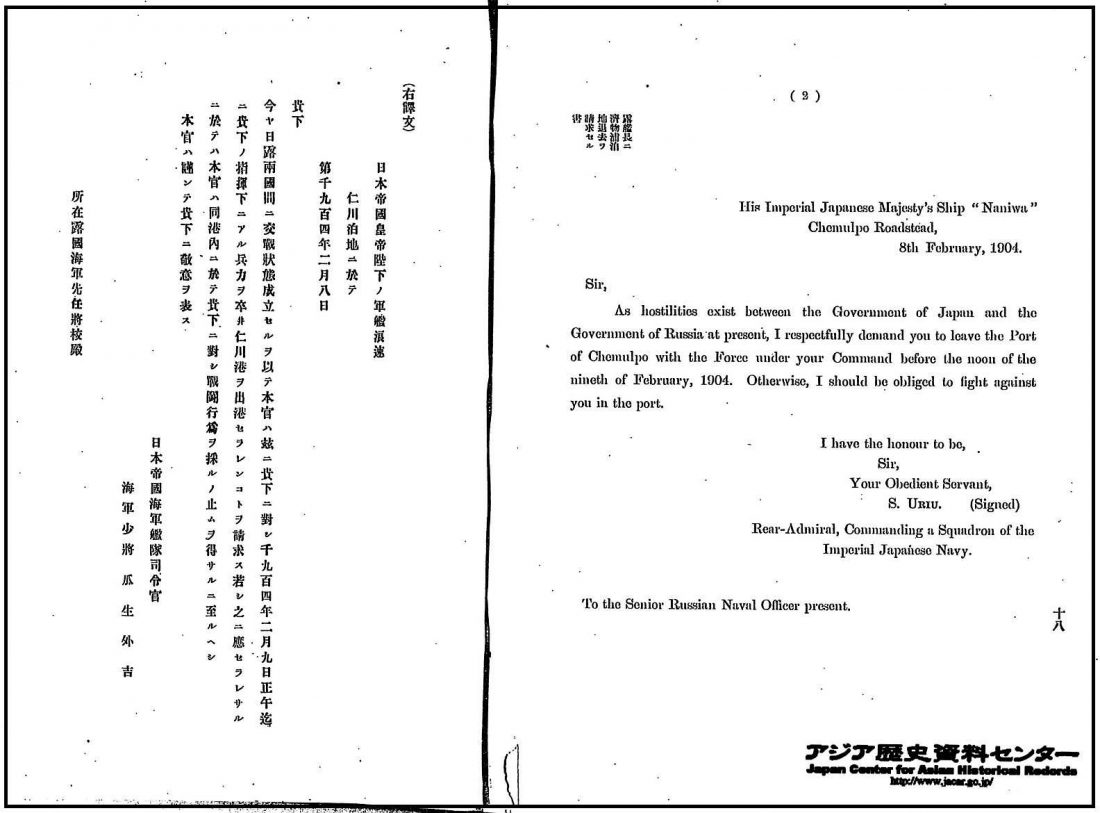 In response to this the Varyag’s captain, Vsevolod Fyodorovich Rudnev, called a conference with the neutral warship captains (only the Americans declined to attend). These decided to reject Uryu’s request that they leave Chemulpo and, against the advice of the neutrals, Captain Rudnev stated his intention of fighting his way out to the open sea. 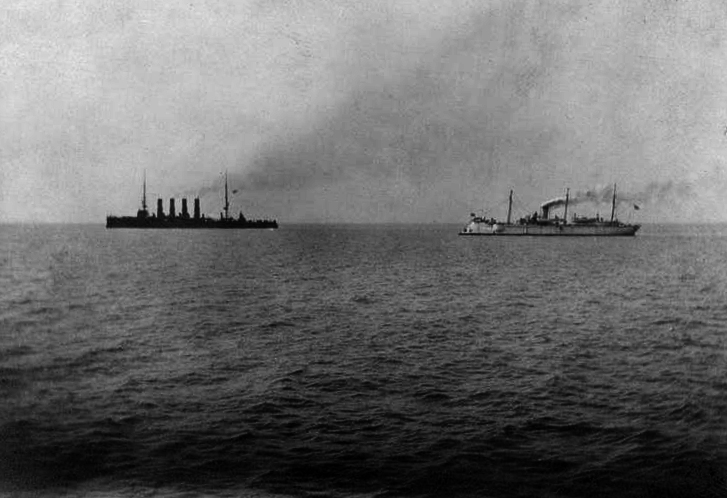 The Varyag (L) and Korietz (R) steam out to meet the Japanese, as seen from the neutral warships

At 1120 hrs the Varyag steamed out from Chemulpo, the Korietz following closely. As they passed the British, French and Italian ships they were cheered loudly – indeed the Elba’s band played the Russian national anthem. 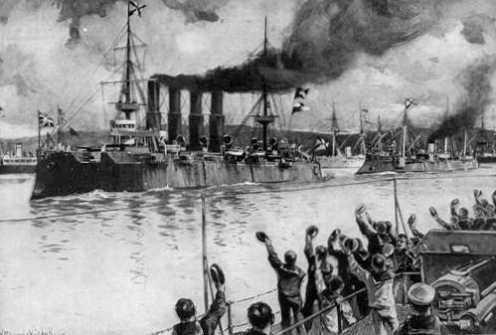 The Russians steaming out to Death or Glory, cheered by the crews of the neutral warships

The battle that followed lasted less than two hours and the outcome was inevitable. Without room for manoeuvre and wholly outgunned, the Russian vessels were subjected to a merciless pounding at ranges as short as 6000 yards.. Rudnev himself was wounded and of Varyag’s 570-man crew 82 were killed and 190 injured. The Japanese appear to have suffered no casualties. 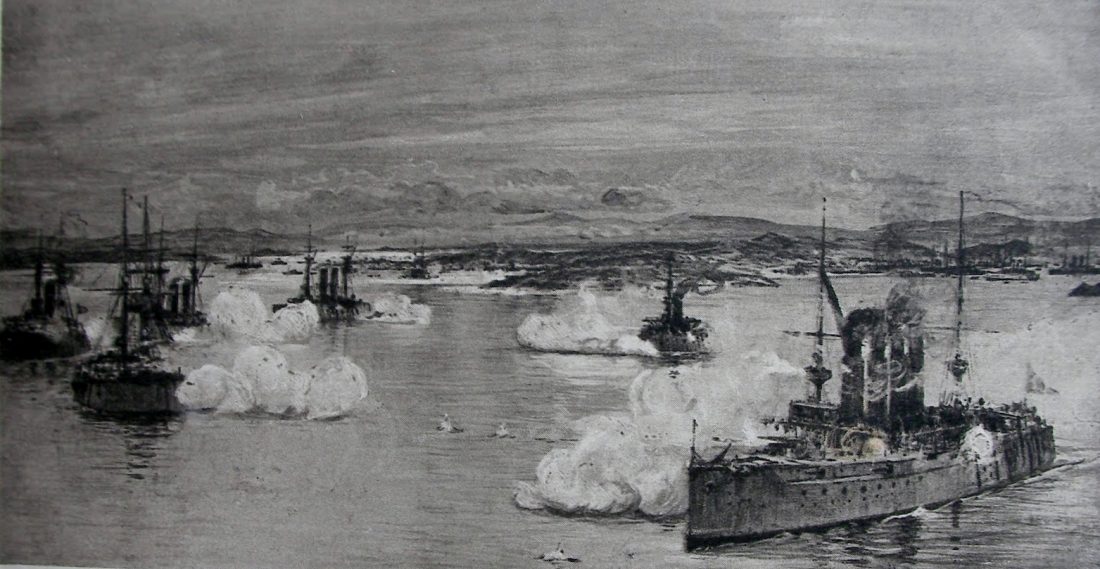 The Varyag fought magnificently, and claimed hits on the Asama, but was incapable of overcoming the massive Japanese superiority of numbers. All  twelve of her 6-in guns were put out of action – the absence of gun-shields making their crews particularly vulnerable to fragments, even if not hit directly, and so too were most of her smaller weapons. She took five serious hits at or below the waterline, her superstructure and ventilators were wrecked and at least five fires had to be extinguished. Small as she was, the Korietz fought no less valiantly . 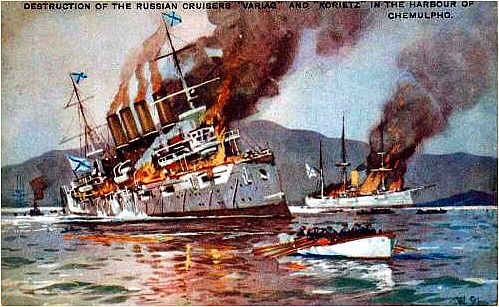 Badly damaged, unable to make their escape but unwilling to surrender, both Russian vessels limped back into Chemulpo. The Varyag was scuttled there at 1600 and the Korietz was blown up by her own crew. The Russian survivors were taken on board the neutral warships and in due course were returned to Russia on neutral shipping. 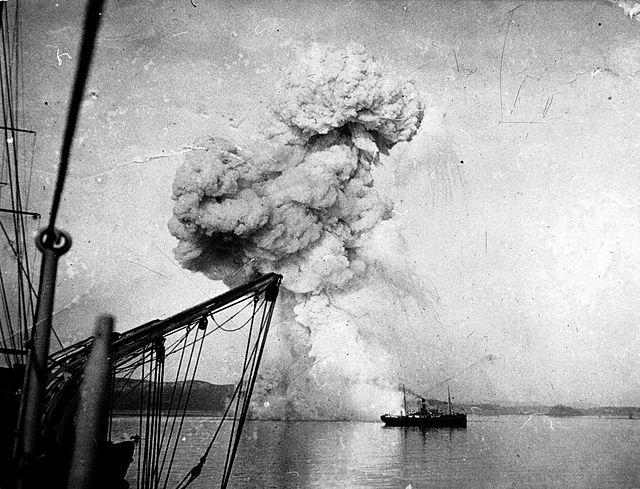 The Koreitz blowing up – a transport lies between viewer and explosion 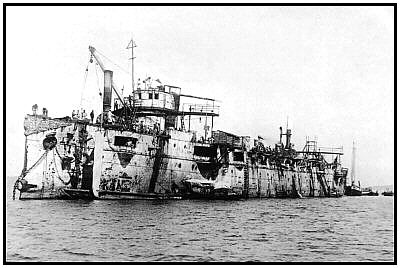 The Varyag after surrender – pounded to a wreck 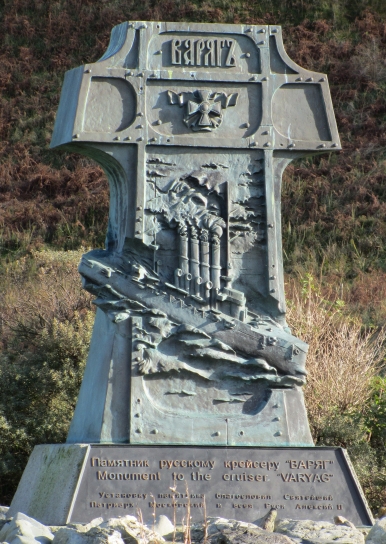 The Varyag and her crew were rightly honoured in Russia, then and later, for their heroic defiance – indeed in 1972, in the Soviet era, a commemorative postage-stamp was issued in her honour. Captain Rudnev was decorated by the Czar and was also respected in the Soviet era – a monument was erected to him in Tula in 1956. The most valuable honour of all came from the Japanese themselves, the Emperor awarding Rudnev the Order of the Rising Sun in 1907, a possibly unique example of one enemy awarding a decoration for valour to the commander of an opposing force.

The Varyag was salvaged by the Japanese, refurbished and taken into service under the name Soya. During World War 1, when Russia and Japan were allies,  she was sold back to teh Russians, as were other captured ships, adn sent to Britain for an overhaul that was never competed. In the aftermath of the Russian Revolution she was taken over by the Royal Navy, which had no use for her. Varyag was finally sold for scrap in 1920 but, while under tow to teh breakers, grounded on rocks near Lendalfoot  on Scotland’s Firth of Clyde. Here she was scrapped in situ and she is now commemorated by a spectacular monument which was unveiled in July 2006 in a ceremony attended by senior Russian politicians and navy personnel, veterans and local dignitaries.

The Varyag’s last resting place, half a world away from the scene of her hopeless but heroic stand, was to be one that Captain Rudnev and his crew could never have imagined.

The fledgling Japanese Navy and Japan’s bid for power in Korea in 1880s: 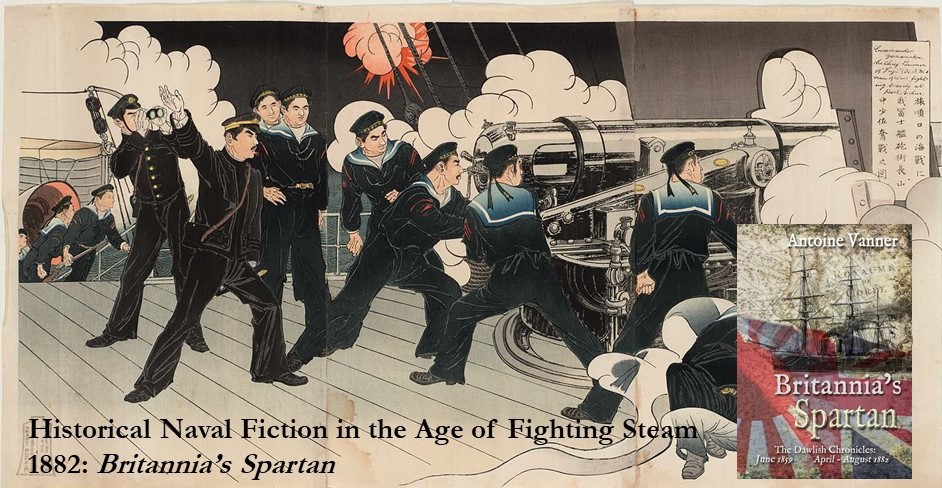