Skip to content
Two USS Wasps: Glory and Tragedy in the War of 1812

The name Wasp is one of the oldest and most illustrious names given to ships of the United States Navy. The earliest, a schooner purchased by the Continental Navy in late 1775, was one of the first ships in American government service and since then ten more vessels have carried the name. The latest of these is the current Wasp, a 40,500-ton amphibious assault ship launched in 1989 and currently in service. Two Wasps were aircraft carriers which saw extensive service in World War 2, the first of these being lost during the Guadalcanal Campaign and her successor, launched in 1943, remaining active until the early 1970s. 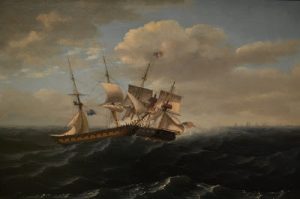 In the 1807-1814 period, four Wasps were commissioned and two of these were to come to eerily similar ends. The earliest of these was a sloop-of-war which entered service in 1807. She was a compact and powerful vessel, carrying no less than sixteen 32-pounder carronades – murderously efficient weapons at close quarters – as well as two 12-pounder long guns on her 450-tons and 105-ft length. Her 140-man crew was small but this was most likely an advantage for welding it together as a well-trained and cohesive force. She remained in home waters until war broke out with Britain in June 1812 and she continued thereafter to operate off the American coast. In 14th October she sighted a British convoy off the Delaware River. On investigation this proved to consist of six-merchant ships, escorted by a 22-gun sloop-of-war, HMS Frolic. The Wasp drew close during the night and at mid-morning on 15th October the two sloops opened fire on each other in strong wind and unfavourable sea conditions. As Frolic, like Wasp, had carronades as her main armament, the range was necessarily close.

Unusually for the Royal Navy (though it was apparently common practice for the French) Frolic concentrated her fire on Wasp’s rigging, while the latter directed her own cannonade on the Frolic’s hull. Wasp suffered badly – the upper parts of her mast were shot away and many of her braces severed. Now unmanageable, she drifted slightly ahead and the Frolic collided with her. The initiative of the American commander, Jacob Jones, could not be praised too highly for he took immediate advantage of this situation. He delivered a single raking broadside – devastating at this range when carronades were involved – and then launched boarders. Frolic struck her colours. The action had taken twenty-two minutes and every British officer and half her crew – some 90 men in all – were either dead or wounded. 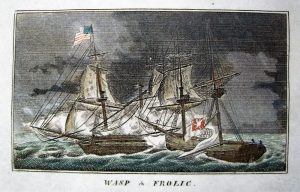 Contemporary illustration – a real morale-booster for the United States

Had the affair ended there it would have been a resounding triumph. Unfortunately however, the Frolic’s masts collapsed soon after the surrender and Wasp herself also needed extensive repairs. Neither ship was in a fit state to escape when a British “74”, the ship-of-the-line HMS Poictiers, arrived, en route to join the fleet blockading the American coast. Outgunned, and with two crippled ships on his hands, Captain Jacob Jones had no option but to surrender both Wasp and Frolic. They were taken to Bermuda for repair, after which the Wasp became was taken into service in as HMS Loup Cervier the Royal Navy, her name being again changed to HMS Peacock two years later. Under these names she saw significant service and captured several mercantile prizes. The changes of name brought her no luck however and she disappeared without trace, with all hands, somewhere off the Virginia Capes, in July 1814.

The next Wasp was a schooner which went to sea under a privateer’s warrant in July 1812 – this meant that two Wasps were briefly in simultaneous service. She cruised in the West Indies later that year, captured at least one prize, and was lucky to survive a hurricane that cost her both her masts. She made one further, but unsuccessful, cruise as a privateer, her service ending in 1814.

Yet another Wasp was by now in service, this one a chartered sloop that operated on Lake Champlain during the late 1813 and into 1814. Her charter ended without her having been in action. 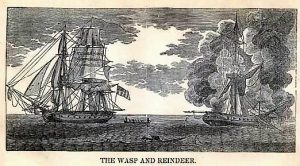 The fourth Wasp of the period was the replacement for the sloop captured by the British in 1812 and she was specifically constructed as a warship. Though tonnage and armament was comparable she was ship-rigged – i.e. had three masts, making her look like a miniature frigate. Commissioned in early 1814 she set sail in May to carry the war into the Eastern Atlantic and the approaches to Britain itself. She immediately captured four small merchant ships as well as a Royal Navy brig. Except for one vessel retained for prisoners, all were either burned or scuttled – one assumes that with Wasp’s crew being small, some 170 men, and the manning demanded by her twenty 32-pounder carronades and two long 12-pounders, provision of prize crews would have diminished her fighting ability. The decision proved a wise one for on 28th June she encountered the almost identically-armed Cruizer-class sloop Reindeer some 200 miles west of Cornwall.

The resulting battle was brief – nineteen minutes – but it once again involved a ferocious exchange of carronade-fire at close range. The Reindeer made several attempts to get a boarding party on to Wasp but they were beaten back each time. It was now Wasp’s turn and her attempt at boarding proved successful. Reindeer struck her colours – her captain was among the 25 dead and there were in addition 42 wounded, a casualty rate of approximately 40%. She was too badly damaged to be taken as a prize and she was accordingly burned. Thereafter Wasp headed for the French port of L’Orient to land her prisoners and to refit, taking two small prizes on the way. 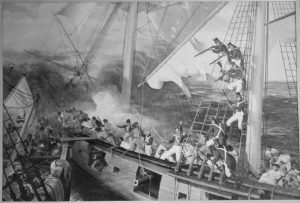 Identified on Wikipedia as copy of painting by Sergeant John Clymer (1927 – 1981) and indicated to be Public Domain. If not, then apologies are offered for use of this splendid work

Now repaired, Wasp was back at sea in late August and immediately captured two brigs. On 1st September she encountered a ten-ship British convoy and, even though it was escorted by a “74”, Wasp darted in, captured a brig, took off her crew, burned her and escaped without loss. Later that evening she sighted a solitary sail. It proved to be an 18-gun brig, HMS Avon. Wasp closed with her and in late evening – it would have been dark – opened fire.  Following a merciless battering Avon struck her colours. Three further British warships now arrived on the scene and Wasp, outnumbered, made off, though not without sustaining some damage in a brief exchange of fire.

Wasp’s successes continued through September and on the 21st captured an 8-gun brig, HMS Atalanta. A valuable acquisition, a prize crew was put aboard her under command of a midshipman to sail her to the United States. She arrived in Savannah in early November.

And that was all but the last contact with Wasp. 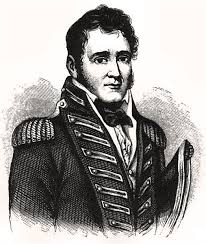 She was spotted by a Swedish merchantman in October, apparently heading for the Caribbean. She was never seen again. Like her almost-twin and her namesake – later HMS Peacock – Wasp disappeared without trace, taking all hands with her. In her half-year of active service she had accumulated a list of successes seldom equalled in so short a time and it is ironic that she should ultimately have succumbed to Nature rather than to enemy action. Her commander, Johnston Blakely (1781 – 1814) – shown in the illustration on the left – was promoted posthumously to the rank of Captain. Three American ships have been named in his honour.

The War of 1812 left a proud tradition for later Wasps to live up to – and they did.