Skip to content
The Raids of HMS Doris, December 1914

The Raids of HMS Doris, December 1914

Britain declared war on the Turkish Ottoman Empire on November 5th 1914, the culmination of a complex series of events that resulted in Turkey finally throwing in her lot with Germany and Austro-Hungary. A Turkish attack on Russia brought Britain and France to the aid of her ally, thereby initiating the unforeseen processes that brought the Middle East to the tragic state it is in today. At this time the Ottoman Empire controlled, among much else, the entire Levantine coast –  consisting of those of Syria, Lebanon, Israel, Gaza and Egyptian Sinai – between modern Turkey and the Suez Canal. The first British concern was to be the security of the Canal itself. The nearest major Turkish army concentrations were believed to be in and around Gaza. An advance of some hundred and forty miles across Northern Sinai would bring them to the Canal – as indeed would happen in early 1915. It is against this background that the raids of HMS Doris, a small, obsolescent protected cruiser were to take place. 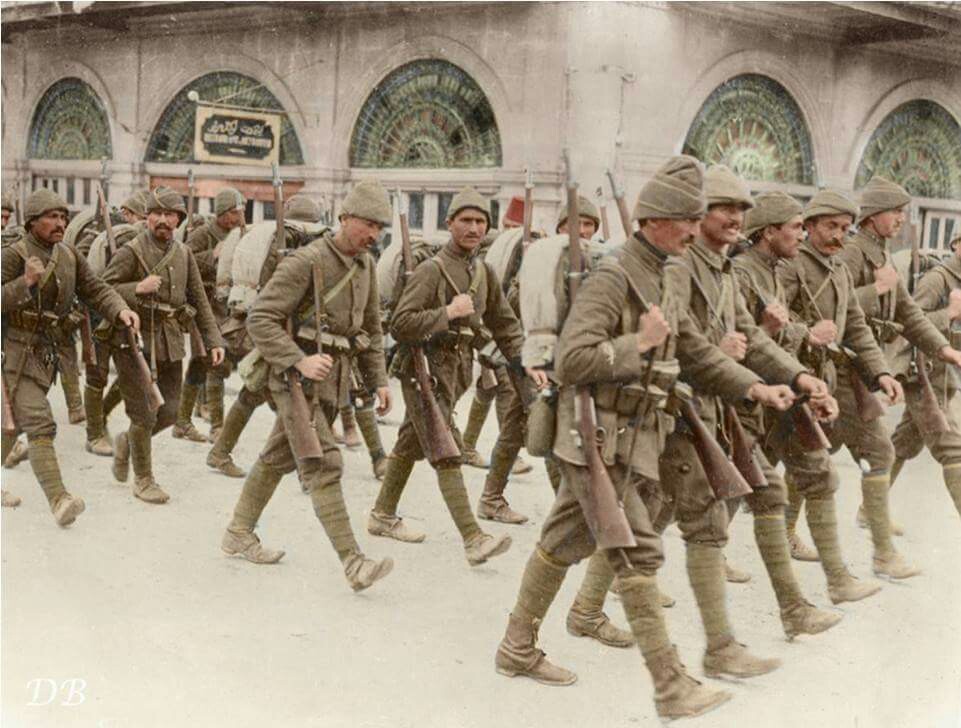 Ottoman Turkish troops on the march in WW1 – image found on Pinterest (Credit to ??)

From initiation of hostilities Ottoman naval forces were essentially trapped north of the Dardanelles – the strait that gives access, via the Sea of Marmara, to the Black Sea. German and Austro-Hungarian submarines forces, which were from 1915 onwards to play a major role in the Mediterranean, represented no threat as yet. British and Allied naval units were therefore in a position to operate with a greater degree of impunity than would afterwards be the case HMS Doris was therefore able to raid in December 1914 in a swashbuckling manner that had much in common with those of her forebears in the Revolutionary and Napoleonic periods. 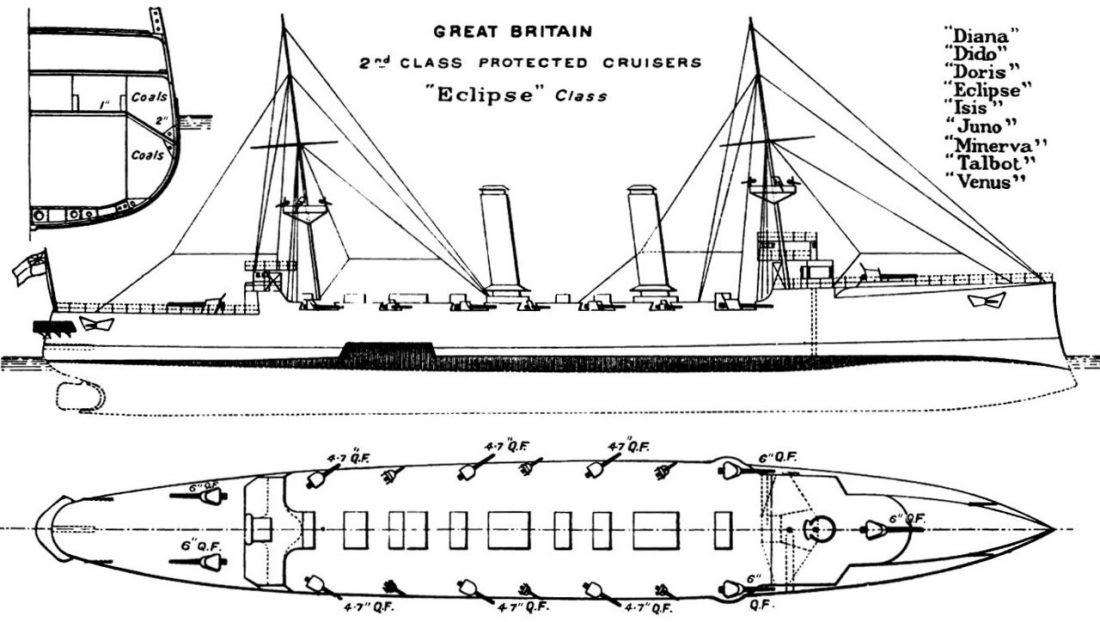 The Eclipse class, as completed – shown in Brassey’s Naval Annual 1896

Commissioned in 1897, one of the nine-ship Eclipse class, Doris was a 5600-ton, 350-foot second-class protected cruiser, designed for reconnaissance, commerce raiding and trade-protection duties. Capable of 18.5 knots maximum on her 9600-hp, she was heavily armed for her size – initially five 6-inch and six 4.7-inch guns. She had gained fame in the Boer War, when she landed a naval brigade, equipped with one of her 4.7-inch weapons on an improvised land carriage. A major refit in 1904-05 resulted in deletion of the 4.7-inch weapons and her main armament comprised thereafter no less than eleven 6-in. 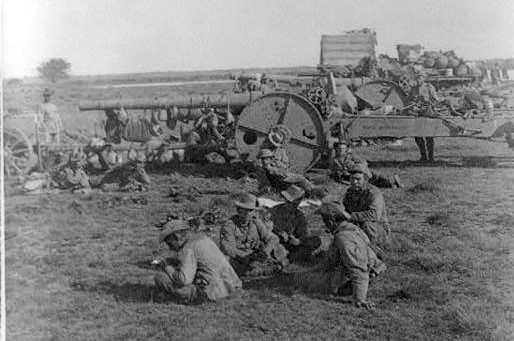 One of HMS Doris’s 4.7-in weapons on an improvised field mounting during the Boer War

By 1914, though not old, Doris was already obsolescent, but this was no drawback in the task assigned her in December 1914: primarily reconnaissance of the Levantine Coast and destruction of communications, where possible. Her commander, Captain Frank Larken (1875-1953), who would later rise to Admiral, was prove himself ideally suited to this role.Initially operating jointly with the Russian protected cruiser Askold, and carrying a seaplane borrowed from the French navy, Doris began with a bombardment of Turkish positions at El Arish, on the Sinai coast, on December 13th..  Two days later she made a similar attack north of Gaza and landed a small party to complete the destruction and which returned, without loss, before more Turkish troops arrived. The Askold was meanwhile similarly engaged further north. Off Jaffa – a town now bordering Tel Aviv – and further north, off Haifa, Doris launched the French seaplane, an operation which would have involved hoisting it overboard for a take-off from water, with similar recovery thereafter. Flown by a French Lieutenant Destem, and with a British intelligence officer, J.R. Herbert as observer, the aircraft penetrated inland as far as Ramallah to locate Turkish forces.

On December 18th another small force was landed south of Sidon. Here, as was the case along much of the Levantine coast, terrain determined that main north-south communications – road, rail and telegraph –  ran very close to the sea. Doris’s party cut down telegraph lines and their posts over three quarters of a mile. This seems to have been quite a relaxed affair with conversations being held with locals ploughing nearby. An account by a Doris officer noted that “a number of tortoises and two rare frogs were brought off” by Herbert, who later presented them to the Cairo Zoological Gardens. In this, Herbert appears to have been a latter-day Dr. Stephen Maturin. 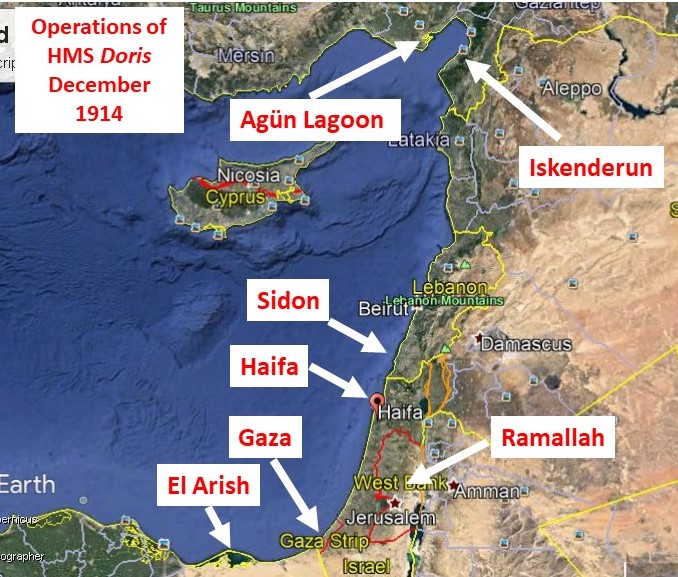 HMS Doris now proceeded to the Gulf of Iskenderun – located at the right angle where the Turkish and Levantine coasts meet. Then known as Alexandretta by the British, the city of Iskenderun has been of immense strategic importance through history. The name of a nearby town, Dortyol, which means “Four Roads” (and with which the present writer once had a business association), indicates how important this area was as a link between Turkey proper and the Ottoman provinces of Syria, Lebanon and Palestine. Later in World War I consideration was given to landing an Allied Army there rather than at Gallipoli, an action that would have prevented Turkish reinforcement of the Palestine Front. The mountainous terrain inland meant that here too communications lay directly adjacent to the coast, deep ravines necessitating bridging in places. Doris landed a sabotage party on the night of December 20th to cut telegraph lines and remove rails from the railway. By daylight the landing party was safely back on board and witnessed a train loaded with camels derailing itself. A second train arrived and, unable to pass, was brought under fire by Doris. An attempt to destroy a railway bridge by 6-in gunfire proved less successful however. 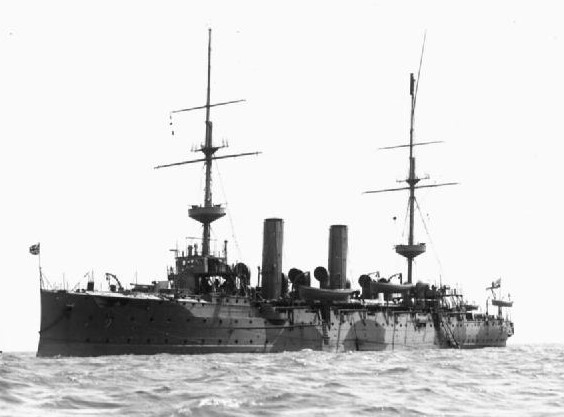 Captain Larken now stood off Alexandretta itself. Under cover of a white flag, an officer was sent ashore to demand that the Turkish governor would order destruction of all locomotives and war material in the city. The alternative would be bombardment of official buildings by Doris. The governor played for time by asking for a twenty-four hour delay. The weather conditions were atrocious – strong wind and rain – and under this cover much of the war material was removed by the Turks. A reply to Larken’s ultimatum was received in the morning – with the American consul, a Mr. Bishop of the Standard Oil Company acting as neutral intermediary. The Turkish Commander-in-Chief in Syria, Djemal Pasha (1870-1922), responded by telegraph, threatening to kill one or more British subjects interned in Turkey for any person killed in bombardment of Iskenderun, and he refused to countenance destruction of war material. A flurry of telegrams followed to and from Mr. Bishop’s ambassador in Istanbul, and from British prisoners held in Aleppo and Damascus pleading that there should be no bombardment. Captain Larken held his ground however and got a message to Djemal warning him that he would see to his prosecution as what is now described as a war criminal in the aftermath of any eventual peace treaty. He allowed twenty-four hours for this to sink in and decided to fill this time destructively.

HMS Doris now steamed the short distance to Dortyol and once more landed a force. A small Turkish unit was put to flight, with support from fire from the ship, and thereafter the landing party wrecked a railway bridge with explosives. A small railway station and telegraph office was also destroyed, three Armenians there begging to be taken on board Doris as they knew they would afterwards be regarded as complicit by the Turkish authorities. They were to prove the source of useful intelligence. 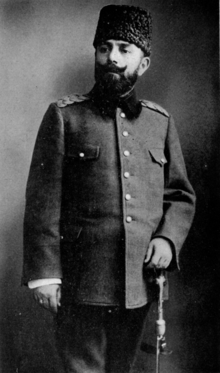 The following morning, December 22nd, Doris was back at Iskenderun to find that Djemal backed down. (This unsavoury individual, seen on the right, was one of the triumvirate that ruled the Ottoman Empire, with the Sultan as their puppet. He was to play a leading role in the Armenian Genocide and it is gratifying to know that he was assassinated by Armenian survivors in Tiflis, Georgia, in 1922).  It was agreed that two railway locomotives were to be destroyed but the city governor complained that he did not have the necessary dynamite to do so. Undeterred by this, Captain Larken volunteered a gift of gun cotton, and of the naval experts familiar with this explosive. A new objection was raised – worthy of a Gilbert and Sullivan operetta – that protocol demanded that the destruction be carried out by an Ottoman officer, and that there was none with the necessary expertise. Captain Larken rose to this challenge also and agreed that one of Doris’s officers would be regarded as seconded to the Ottoman navy for one day. The locomotive drivers apparently tried to drive their machines away but were chased by Turkish cavalry and returned for execution. One of Doris’s officers noted that the farcical negotiations were “followed by the vigorous shaking of an unmannerly Ottoman ofﬁcer of gendarmes, the harbourmaster, a prince of procrastinators, who was cast into a shallow part of the sea”, an experience he survived with a marked loss of dignity. Lit up by Doris’s searchlights, the locomotives were finally blown up, their destruction formally witnessed by Mr. Bishop to the satisfaction of all parties as having been the work of an Ottoman officer.

After leaving Iskenderun, Doris destroyed another railway bridge in the area and, in the swamp-edged Agün Lagoon on the western side of the gulf, found a German merchant ship, the 3475-ton Odessa of the Deutsche-Levante company, which she duly sunk.

Though satisfying – and most probably enjoyable – for Doris’s officers and crew, her depredations were of too minor a nature to make any serious material impact on Turkish capabilities. They did however have a strong impact in psychological and morale terms and the precedent she established brought Turkish coastal traffic to a virtual standstill in the following years.

Not a bad achievement for an outdated cruiser!