The French Navy’s goodwill visit to Britain in 1891 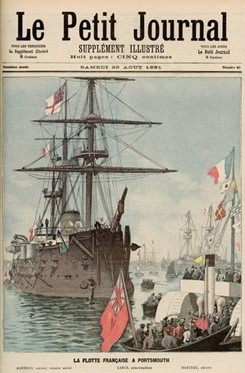 A passing moment of amity

Only in very rare, intermittent and usually short periods in the last nine hundred years have relations between Britain and France been anything but suspicious, if not outright hostile. As recently as World War II Britain was locked with vicious combat with Vichy French forces in Syria, Lebanon, Madagascar, Senegal, Morocco and Algeria. In the ninety-nine years that followed the fall of Napoleon in 1815 outright conflict was avoided – and indeed Britain and France allied themselves with Turkey and Piedmont in the Crimean War, 1854-56 – but mutual suspicions seldom relaxed. For most of the nineteenth century, Britain regarded France not only as a threat, but as “the enemy to beat” (with Russia a close second). This resulted in vast expenditure on coastal fortifications and naval forces. And at the end of the century, in 1898, the “Fashoda Incident” on the remote upper reaches of the White Nile, came close to triggering outright war.

In 1891 however, in period of lowered tension, a French Naval squadron made a goodwill visit to Britain and was marked by Queen Victoria herself reviewing its ships. This event can be compared with a visit she had made to France in 1858, in a time of warm but temporary mutual regard in the aftermath of the Crimean War. Paintings and illustrations of these two events show just how spectacularly naval technology had advanced in the intervening thirty-three years.

The above painting by Antoine Léon Morel-Fatio  (1810–1871) in the French Naval Museum in Paris shows the largest warship of the time, the French Bretagne, saluting Queen Victoria on arrival in Cherbourg in August 1858. She, and her surrounding ships were larger versions of the wooden sailing ships-of-the-line which had fought at Trafalgar a half-century earlier, the only concession to modernity being addition of small auxiliary steam engines. Within two years, every one of these ships would be rendered obsolete by the launching of the British ironclad HMS Warrior and of her French counterpart Gloire.

The French visit to Britain in 1891 evoked massive interest. It was all the more ironic that it should be to the great anchorage of Spithead, just outside the Royal Navy’s Portsmouth base. In response to heightened Anglo-French tensions in the 1860s, Britain had invested enormous sums to protect this base with massive fortifications – some still extant – both on the land side and on artificial islands constructed in the sea approaches. 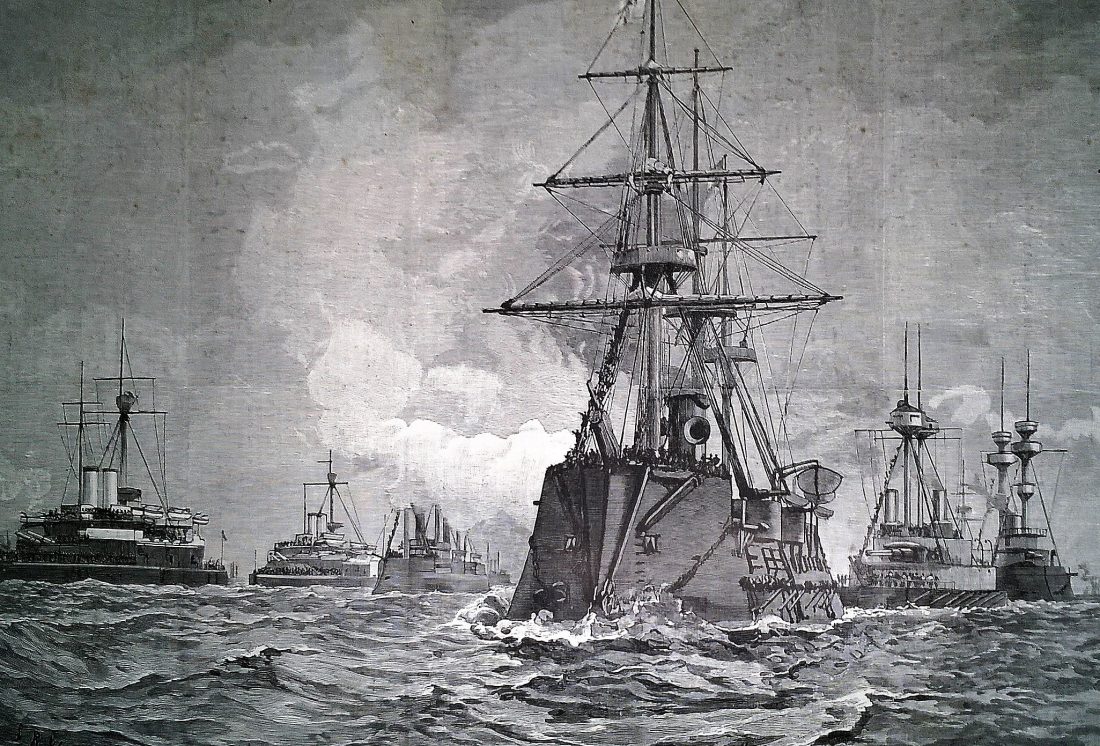 Arrival of the French Squadron at Portsmouth, August 1891 – HMS Camperdown at left, Marengo leading the French line with Raquin and Marceau astern, Surcouf between Marengo and Camperdown

A drawing in the Illustrated London News of the visitors’ arrival gives an impression of the deliberate pomp and grandeur of the event, the French squadron being flanked by the most modern British battleships. One of these, HMS Camperdown, on the extreme left, was to be involved the following year in the most notorious naval disaster of the Victorian era, when she rammed and sank HMS Victoria off the Lebanese coast. Also present was the French battleship Requin in her original configuration with two funnels abreast. Reconstructed, this by-then old ship was to play a valuable role in defence of the Suez Canal and the Allied advance into Palestine in 1917 (see Blog of 24th November 2017).

Though France had sent one of its most modern battleships, the Marceau of 1887, it is surprising that the squadron also included the old wooden-hulled ironclad Marengo, launched in 1872, and by now an obsolete, indeed embarrassing, relic. 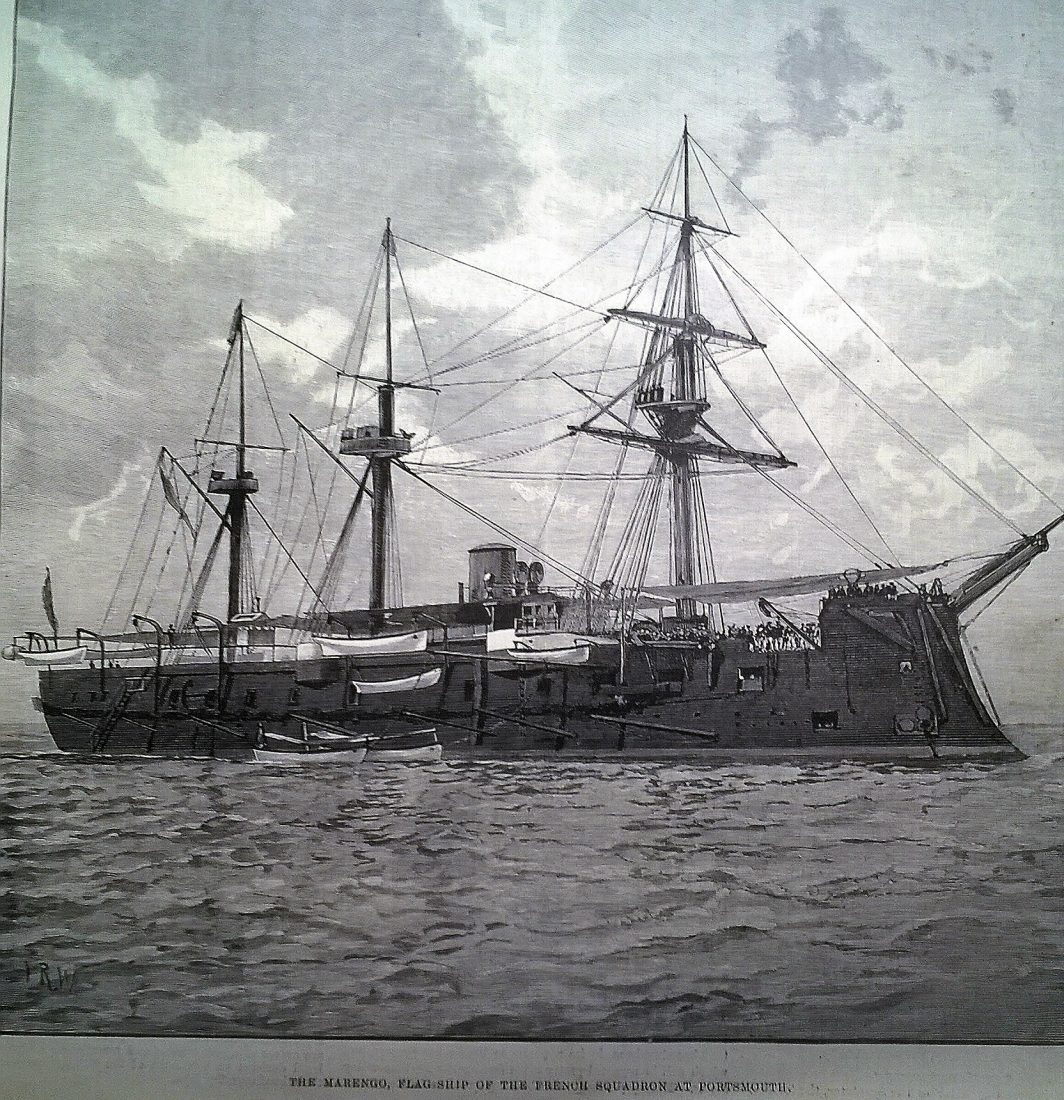 Marengo – hopelessly obsolescent, with armour plating over a wooden hull

The visit allowed officers and specialists from both sides to gauge the quality of each others’ technology and organisations. Of particular interest was an article published in The Spectator magazine on 22nd August 1891 which commented in detail on topics like the relative merits of mounting heavy armament in turrets (French) or in barbettes (British) and also addressed personnel and organisational differences. 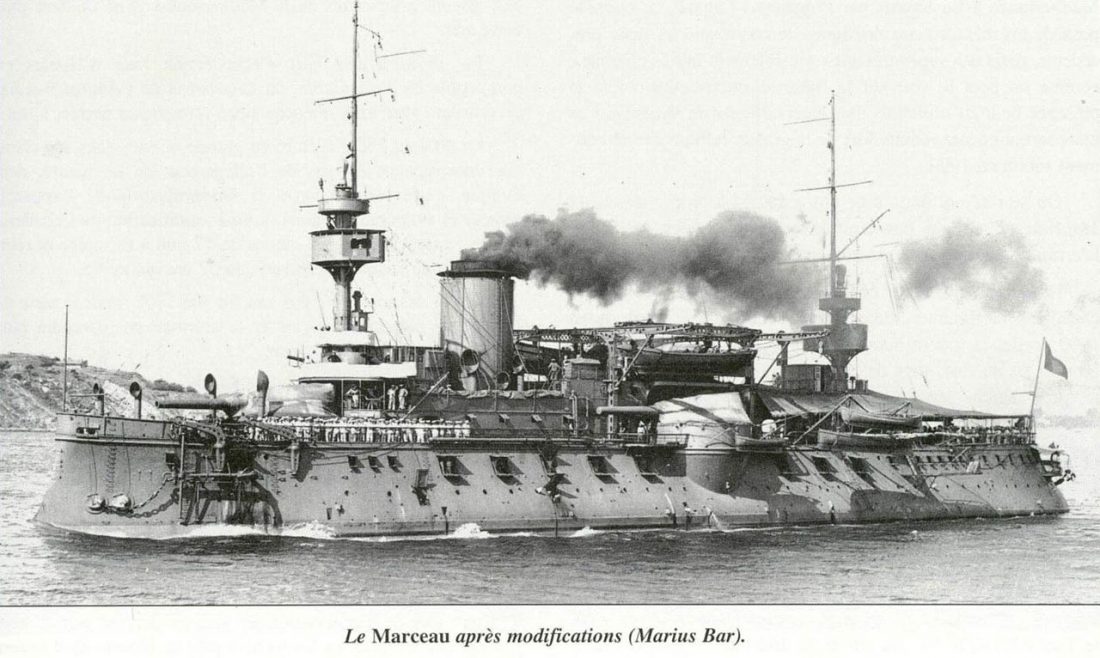 The Marceau – state of the art pre-dreadnought battleship in 1891

The article noted that the French vessels were manned by much larger crews in proportion to their size than would be the case for British ships.  Speculation about the reason for this gave an opportunity for insinuation of some French deficiencies: such overmanning “has long been a tradition in the French Navy, and is probably based on the accumulated experience of the morale of French sailors in action. Apparently the Breton folk who man most of the Navy of the Republic, find support in the sense of numbers, though those numbers must add to the frightful destruction of life which is generally expected to mark the naval battles of the future. Physically, they are fine fellows enough, painstaking and docile, but with little of the gaiety and exuberance of British seamen.” So much for Gallic joie-de-vivre! 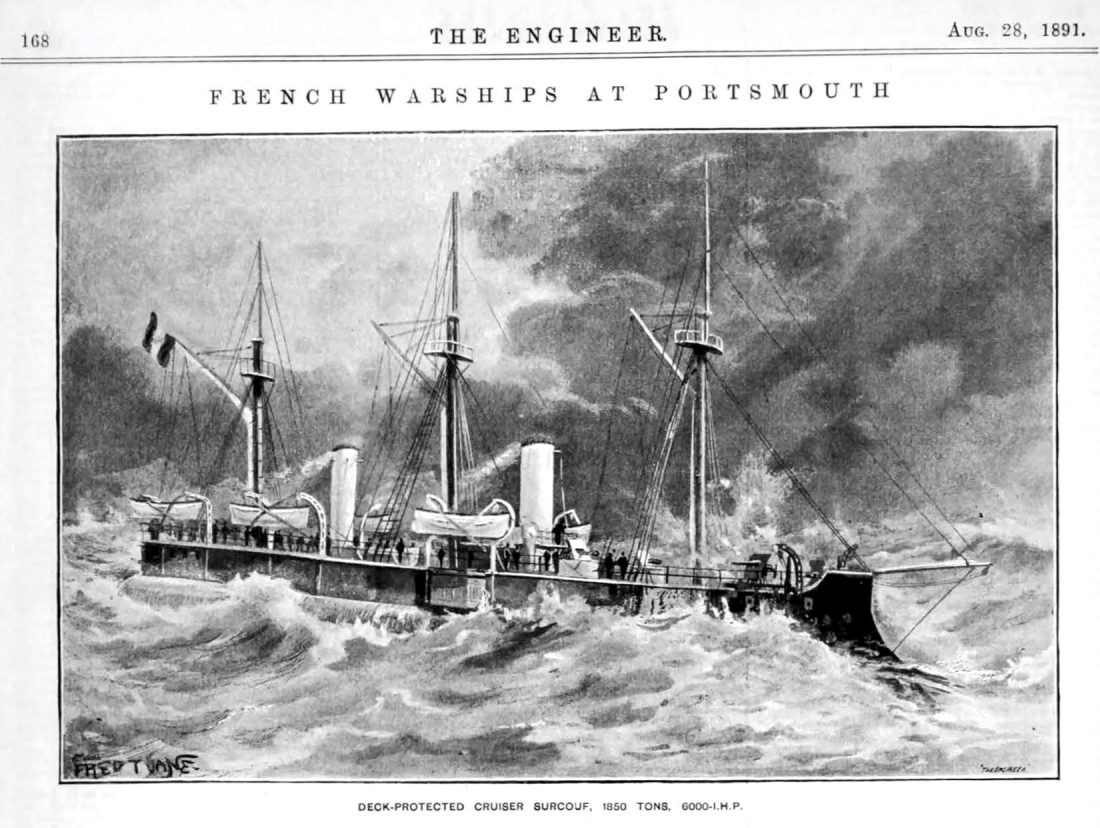 The Surcouf – the cruiser that grounded so embarrassingly?

Given this less than positive assessment, it is possible that there was some grim British satisfaction, not to mention French embarrassment, when one of the French cruisers in the squadron – possibly the Surcouf – ran aground and that British seamen and marines were sent on board to assist in freeing her. Even at this late period this ship seems to have carried a capstan rather than a steam winch. The Illustrated London News saw the event as meriting a large drawing on its cover. 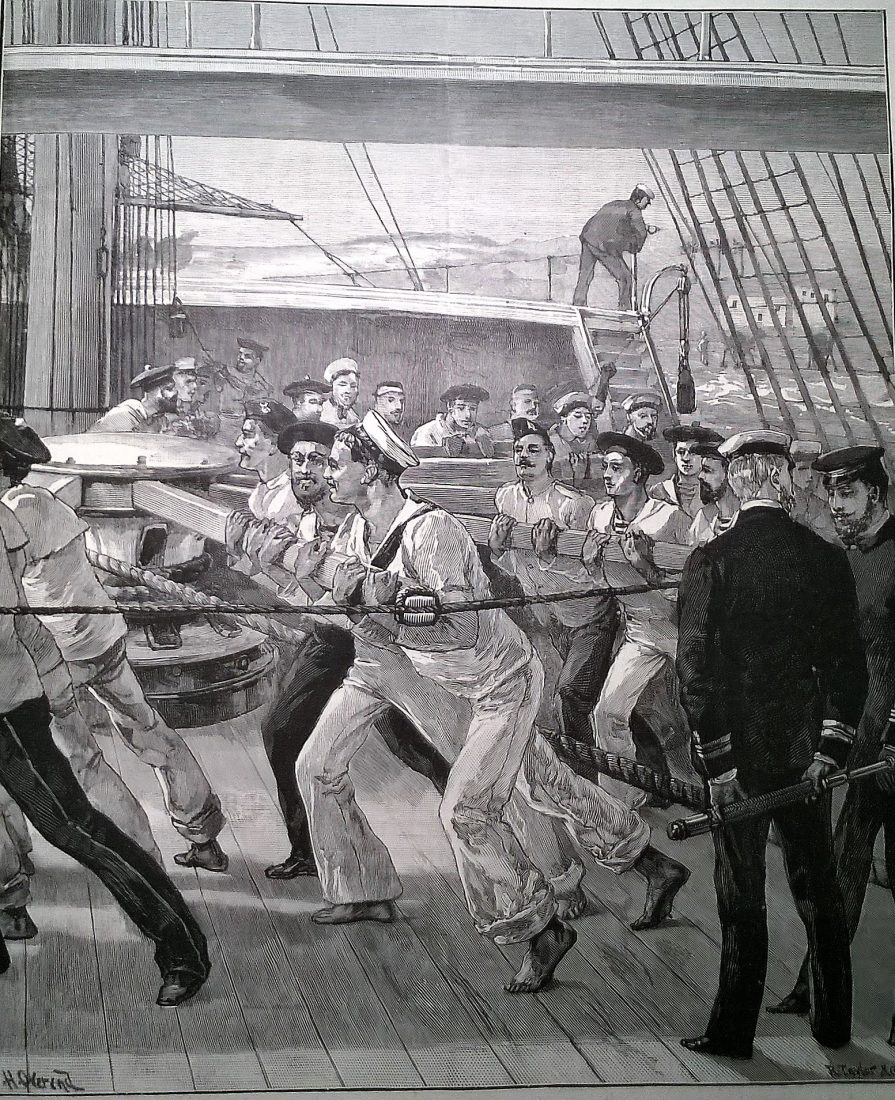 The Spectator’s article does however admit that “the (French) engine-room complements are said to show a marked superiority in education and intelligence over the average class of hand shipped for duty as stokers and assistants in our vessels.”  It also notes that “the officers are educated gentlemen, brimful of the latest theories of naval war and practice, and, as the recent French naval manoeuvres showed, exceedingly competent in the practical management of their ships.” 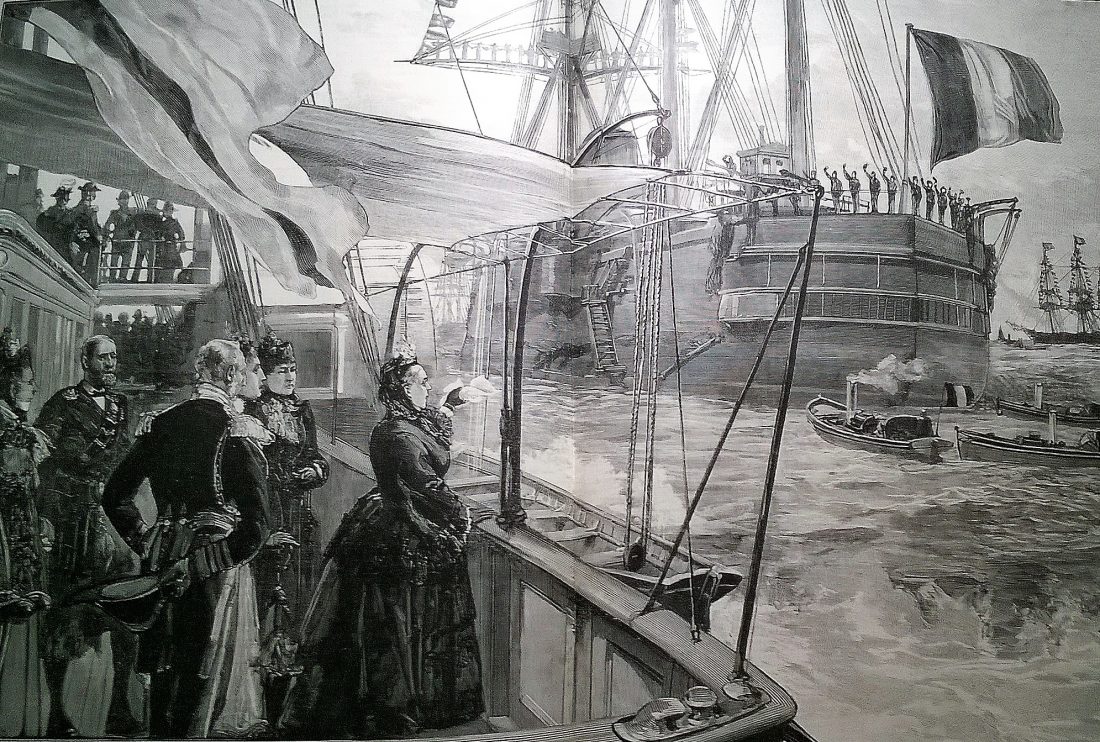 The highpoint of the visit was the review of the French squadron by Queen Victoria. The contrast between the ships she viewed now, and those which she had seen at Cherbourg a third of a century earlier, could not have been more stark. The age of sail was well and truly over and that of steam and armour had replaced it. The twentieth-century was just nine years away and younger officers present, British and French, would fight together as allies in WW I.

This series now comprises six novels – with a seventh due in 2018, as well as short stories made available free to readers who sign up to the mailing list.  The novels so far are set in the 1870s and 1880s and are centred on the life of Admiral Sir Nicholas Dawlish (1845 – 1918) and his wife Florence (1855-1946).  The plots are set in locales as varied as Turkey. Paraguay, the United States, Cuba, Korea, Britain and the Sudan and are linked to real-life events and real-life personalities. Historian and novelist Joanne Druett has described Antoine Vanner as “The Tom Clancy of historic naval fiction” in view  of the attention paid to the technology of this age of rapid transition. Click here, or on the banner below, to  get an overview.