Skill, courage and leadership in the aftermath

In my blog of 12thJanuary we saw the then-Lieutenant Charles Bertram (1777-1854) undertaking a daring shore attack in Northern Spain in 1808 and getting wounded in the process. By 1813 this fine example of what a dashing young naval should be had been promoted to commander and was now captain of the brig-sloop HMS Persian in the West Indies. Though he was to lose this ship, the circumstances, and his masterful handling of the aftermath, ensured that Bertram’s career did not suffer. The details are fascinating. 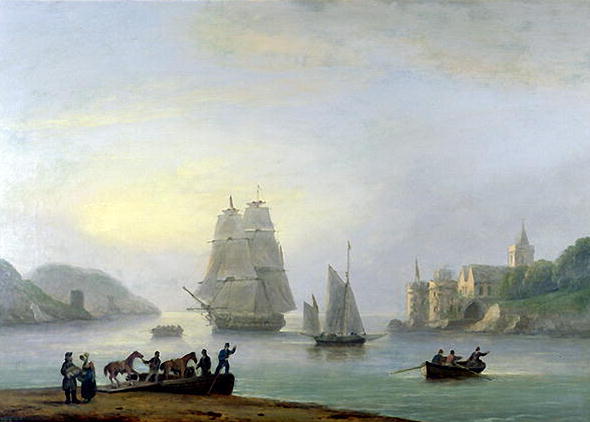 These small, heavily armed and useful vessels, needed much smaller crews than frigates but still packed a powerful punch

In April 1813, with the War of 1812 in its second year, Bertram and the Persian set out from Britain for the West Indies. On 26th June, Persian was chasing an American privateer – the charmingly named Saucy Jack of Charleston – off the northern coast of San Domingo, now known as the Dominican Republic. In the process the Persian ran aground on the large reef known as the Silver Shoals. Considering that the Saucy Jack escaped, one wonders if the American had not been deliberately leading the Persian on to disaster, making use of superior knowledge of the area. Bertram was afterwards to claim that the charts available gave an incorrect location for the shoals. For whatever reason, the brig smashed into the reef bow-on at five in the afternoon and was lodged firmly, springing her seams and taking in water.

The crew worked through the night to get Persian off – most of the guns and anchors were dumped overboard, the boats were launched and continuous pumping was maintained. The result was that the ship broke free but immediately struck on another rock. All remaining disposable weight was now dumped, but without avail. Bertram realised that his ship was doomed – she was settling deeper and her pumps could not cope with the ingress of water. Efforts at saving her continued through the day however. The available boats – two cutters and a jolly-boat were insufficient to take the entire crew in comfort. He accordingly directed a large raft to be made from spars and other available wood. As many of the crew as were not required to maintain the last desperate efforts at saving the ship were loaded into the boats and raft, the latter still linked to the Persian by a cable. 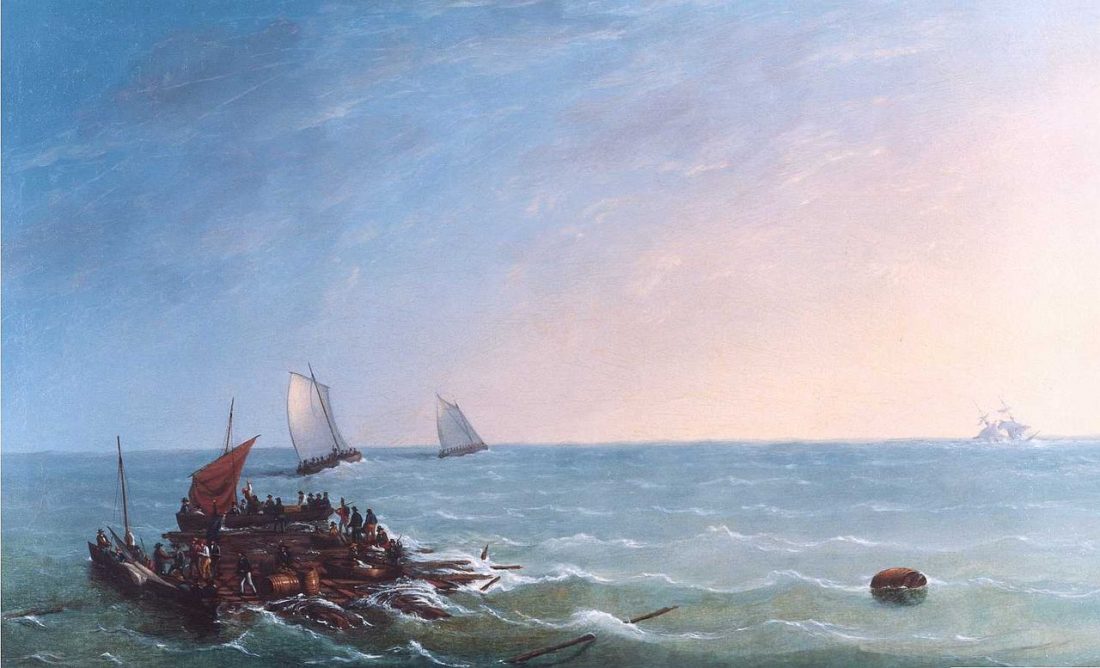 (Public Domain, from Wikipedia, with acknowledgement to the Jersey Heritage Trust)

Bertram himself stayed on board until the early hours of 27th June, boarding his gig, with the man who had stayed with him as the Persian slid off the rock, heeled over on her starboard side and sunk in some forty-five feet of water, the tops of her masts remaining above the waves. By this stage the raft had broken free and had drifted away across rocks which had cut through many of the lashings holding it together. It was now threatening to disintegrate as she was pounded even more on the shoal. Despite the fact that taking the men off the rafts and into the other boats would load them to the point of sinking. Bertram did not shrink from doing so. The weight consideration was so great that the men already in the boats had to jettison provisions, clothes and other items to make room for the newcomers.

The coast of San Domingo was estimated to be some ninety miles away. Daylight found the wind rising from the east, and it increased through the day. One of the cutters carried forty-five, the other forty-two, the jolly-boat twenty-two, and the gig fourteen, a total of one hundred and twenty-three men, not a single life having been lost in the wreck. Submerged almost to their gunwales, it was necessary not only to bail continuously but to cast the remaining provisions overboard. Bertram would later state: “I am happy to say that every man behaved with a regularity that is seldom found on similar occasions: in fact, when the little clothing the people had saved, and the remaining bread and water, were from necessity ordered to be thrown overboard, there was not a murmur—they vied with each other who should obey the order first.” Land was glimpsed just before nightfall and the boats hove to during the night in heavy rain and rough sea conditions, the occupants cold, hungry and exhausted. 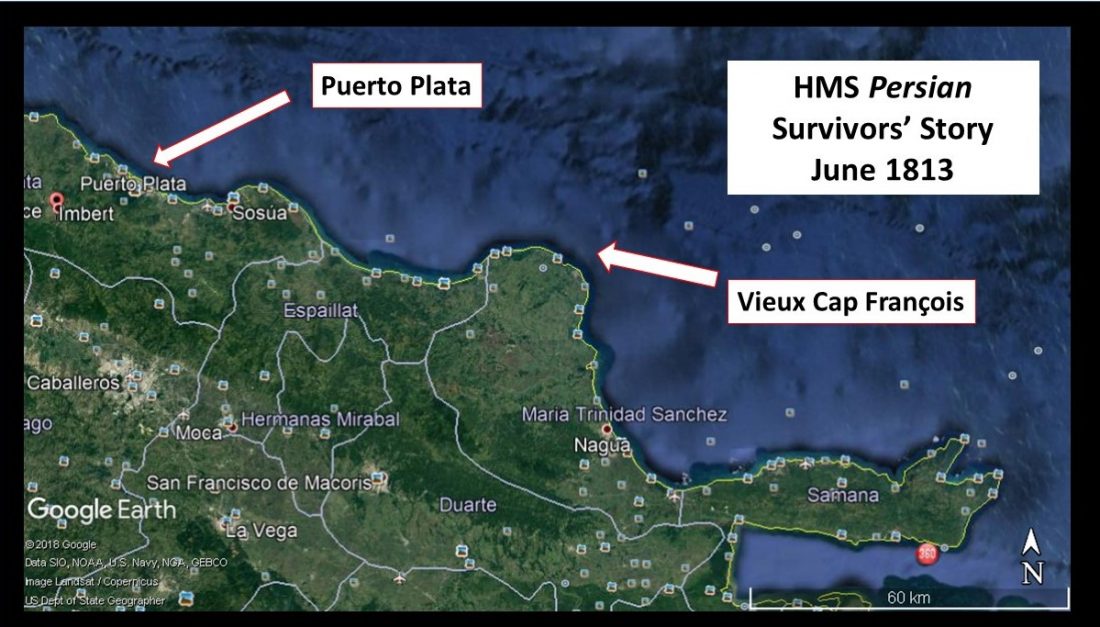 North-East coast of San Domingo – with thanks to Google Earth

When daylight broke on 28th June the boats made sail again and by evening reached a small cove on the coast close to Vieux Cap François. This was scant deliverance – no fresh water could be found other than rainwater in crevices in the rocks and the only food consisted of limpets prised off the rocks. They managed to get a fire going to keep insects off but the greatest relief probably came from exercising limbs that had been cramped to immobility in the overladen boats. They put out again the next morning and by following the coast found a small village where they could buy beef and plantains, as well as access fresh water. They could also engage a pilot who undertook to guide them to the small port of Puerto Plata, to the west, from where they hoped to find a ship that could get them to a British-held island. In order to ease the congestion in boats, Captain Bertram himself and part of the ship’s company trudged along the shore.

The journey to Puerto Plata took two full days – including overnight camping on shore for the entire party – and it was to provide a temporary safe haven, with adequate food and shelter. The survivors were accommodated by the residents – the men in three houses and the officers in a fourth. There was however no vessel available with sufficient capacity to carry the entire crew away. One of the Persian’s lieutenants was however sent to a British outpost on the Turks and Caicos Islands – some hundred and fifty miles to the north across open sea. (Lengthy voyages in open boats were not regarded as exceptional in naval service.) He returned on 10th July with a government schooner, the Swift, and a hired sloop which in due course carried the survivors to the British-held island of St. Thomas, from where they were returned to Britain.

Bertram had displayed remarkable skill, courage and leadership throughout and this was to stand him in good stead when he faced the inevitable court-martial for the loss of his ship. Whether by coincidence or by design, the president of the court martial was Captain Frederick Lewis Maitland, under whom Bertram had served on board HMS Emerald at the time of the successful shore-attack at Vimeiro five years previously. Bertram argued in his defence that the Admiralty charts he had been using showed the Silver Shoals 20 miles too far to the south. He was therefore acquitted and he and his officers and his crew were formally commended for their conduct. 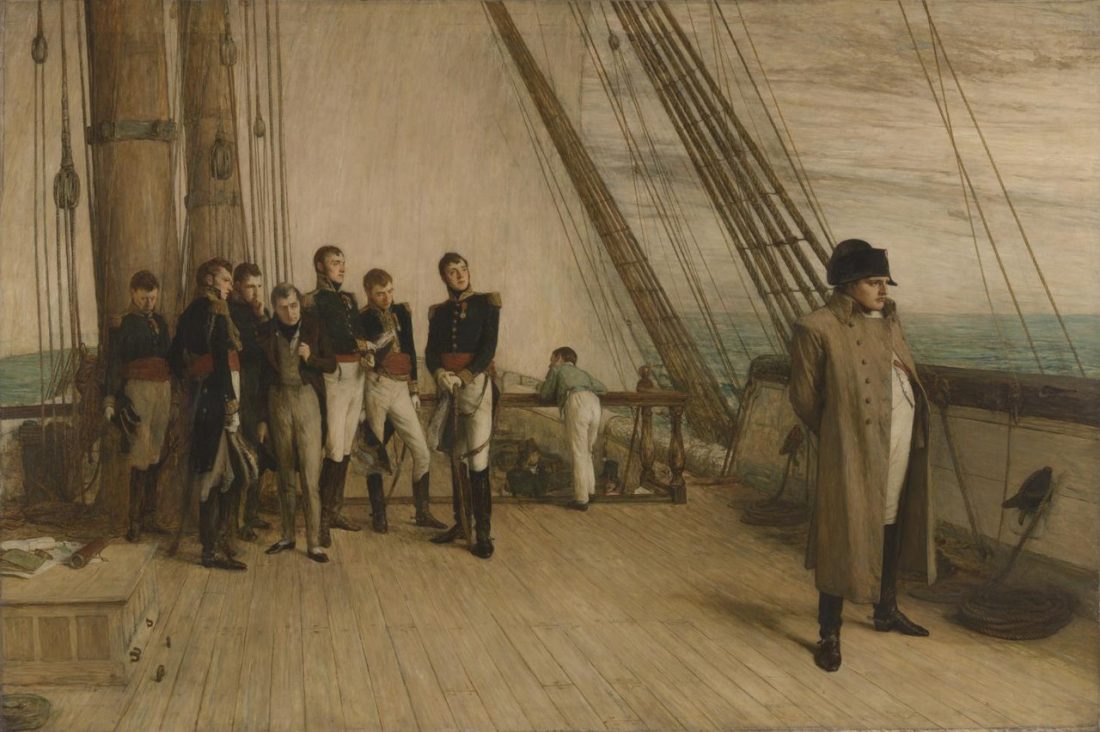 The wars are over: Napoleon, a captive on board HMS Bellerophon, in July 1815, sees the French shoreline recede. The ship was commanded by Captain Fredrick Maitland.  Painting by Sir William Quiller Orchardson (1832-1910)

Bertram’s prospects were not harmed by the Persian’s loss and a year later he was promoted to coveted post captain rank. The timing was for him unfortunate however, coming too late as it did, with the war with the French about to end and that with the Americans winding down. Napoleon would surrender to Bertram’s old commander, Captain Maitland, in July 1815.  In the following years of peace the navy was to have more captains than ships and Bertrand never commanded at sea again. Having achieved post rank however he advanced automatically to Rear-Admiral, and died as such in 1854, at a time when steam ships were changing the entire nature of naval warfare. The Age of Fighting Sail in which he had come to maturity was gone forever.