Death in the Ice – the USS Jeanette and Svyataya Anna expeditions

In a recent blog we saw the Royal Navy gunboat HMS Newport, become the first vessel to pass through the Suez Canal, much to the embarrassment of the project’s French backers (click here if you missed that article). She was one of the twenty-one members of the Philomel class 570-ton, 145-foot wooden vessels, constructed between 1859 and 1857. They were equipped with both sail and steam propulsion and heavily armed for their size. These vessels were very sturdily constructed and were therefore ideally suited to the rigours of polar exploration and capable of withstanding the stresses resulting from being trapped in ice. The Newport herself was to see Arctic employment later in her career, as detailed in the latter part of this article, but first let’s turn  first to Newport’s sister gunboat, Pandora, and her subsequent role in the United States’ Jeannette expedition of 1879-81. 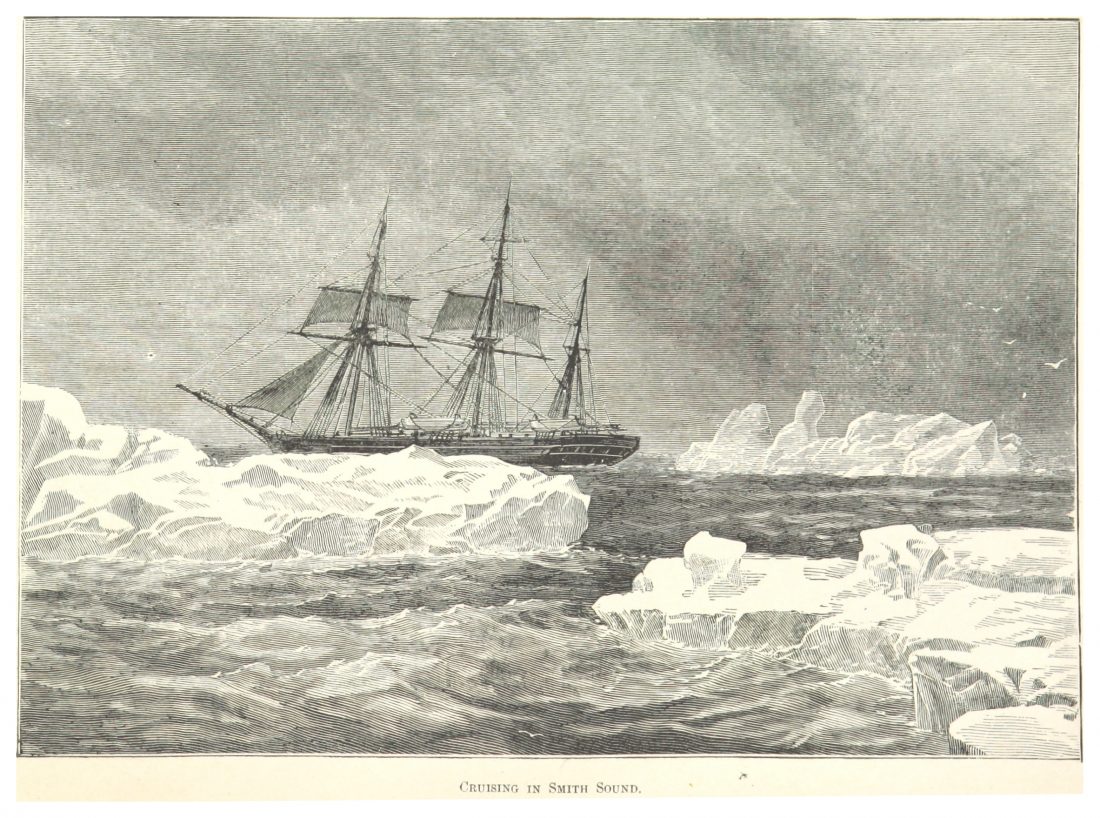 The now-civilian Pandora, cruising in the Arctic in Sir Allen Young’s ownership

HMS Pandora was sold by the Royal Navy in 1875 to Sir Allen Young, who used her for his Arctic voyages over the next two years. In 1878 the Pandora was bought by James Gordon Bennett, owner of the New York Herald newspaper, and he renamed her Jeannette after his sister. Interested in Arctic exploration – and seeing spectacular circulation-raising “copy” in it as a follow-up to his funding of Stanley’s search for the explorer David Livingstone – Bennett gained the cooperation of the American government in fitting out an expedition to attempt reaching the North Pole through the Bering Strait. Although privately owned, the ship was to sail under orders of the Navy – as the USS Jeannette – and the 33 officers and men on board, including three civilians, were to be subject to naval law and discipline. 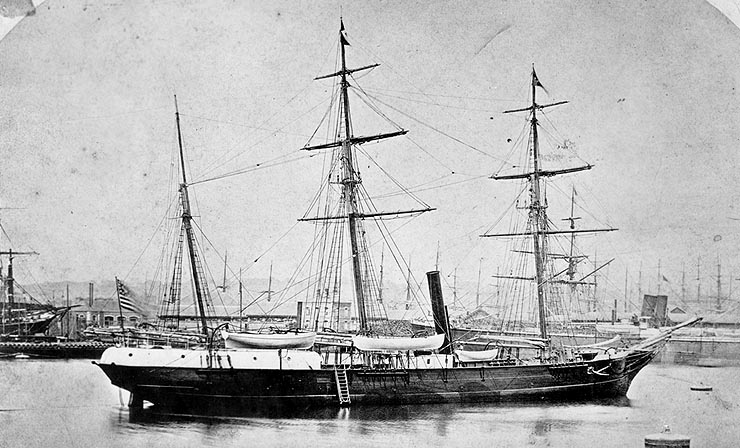 The Jeannette expedition was to be a disaster. After passing north through the Bering Strait, the ship was caught fast in the ice pack near Wrangel Island, off the North Eastern Siberian coast. She then began to drift north-westwards with the ice, ever-closer to Pole itself. Discipline was maintained and scientific observations taken systematically for some two years. Finally, on 12 June 1881, the pressure of the ice finally began to crush Jeannette.  Equipment and provisions were hastily unloaded on the ice and then into the ship’s boats before the remains of the ship herself sank from sight. There was nothing for it but to trek southwards towards the Siberian coast, dragging the boats on sledges until they reached open water.  The privations and fatalities suffered by the party, even after they had reached the frozen tundra of Siberia, were appalling. Almost superhuman powers of endurance and leadership were involved in saving a remnant of the crew, thirteen out of thirty-three. 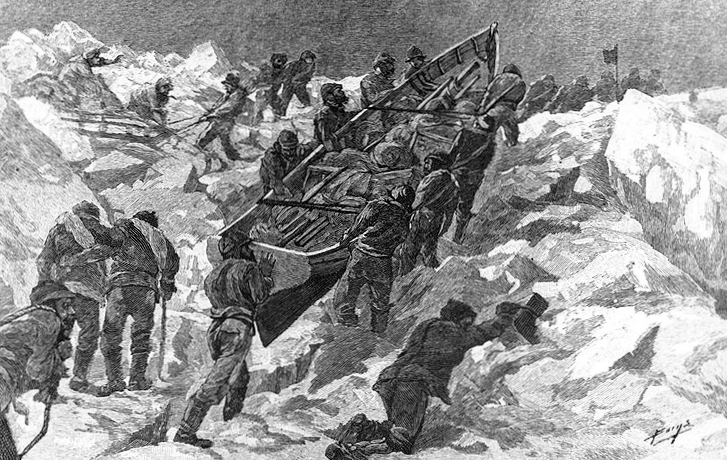 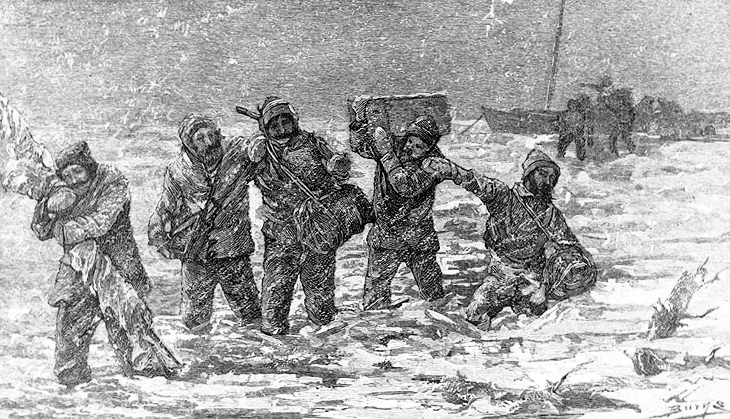 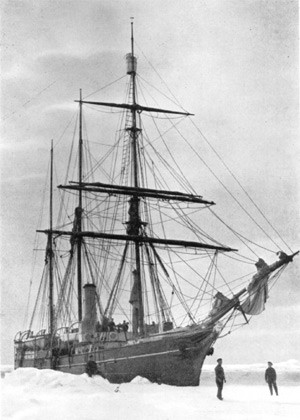 HMS Newport, of Suez Canal fame, was sold by the Roya Navy in 1881 and bought by the same Sir Allen Young, who had previously bought the Pandora.  He renamed the Newport as Pandora II and kept her until 1890 when she was bought by another Arctic enthusiast, F. W. Leyborne-Popham. Again renamed, this time as Blencathra, she was used in an 1893 voyage along the Russian Arctic coast to the Kara Sea and up the Yenisei River as far as Krasnoyarsk, thus taking her to the furthest reaches of Siberia.  Thereafter the Blencathra was sold to a rich sportsman, Major Andrew Coats, who used her for a long hunting voyage to the Arctic waters around Novaya Zemlya and Spitsbergen in 1898 (photograph at left shows her temporarily trapped in ice).

The ex-Newport’s fate was to bear an uncanny resemblance to that of her sister, the ex-Pandora. By now a veteran of Arctic exploration, the Blencathra was bought in 1912 by the Russian explorer Georgy Brusilov for use in an attempt to explore the North-East Passage between the Atlantic and the Pacific. For this she was again renamed, now becoming the Svyataya Anna (Saint Anne). 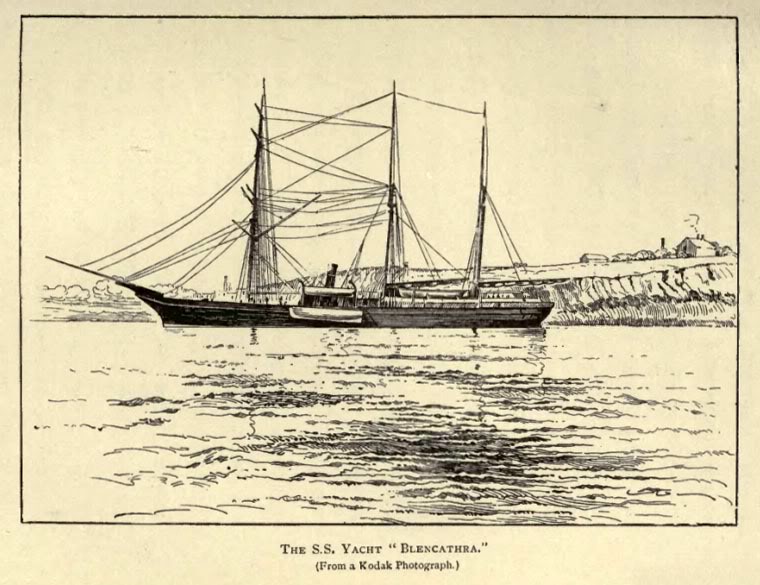 In October 1912 the Svyataya Anna became locked in the iced-up Kara Sea off the Yamal Peninsula. There was no immediate concern – there were adequate supplies and there was every expectation of being released in the following year’s thaw. This did not happen however – she remained trapped through 1913. By early 1914 she had drifted so far with the ice that there was no prospect of release in that year either. Supplies were running low, scurvy had broken out and the situation was desperate.  An officer and a crewman were given permission to trek to safety on foot. These were the only survivors and they managed this only after horrendous privations. The Svyataya Anna and her crew disappeared and among the lost was Yerminia Zhdanko, a 22-year-old nurse, only the second Russian woman to have ventured into the Arctic. Only in 2010 were the bones of a crew-member, a logbook and various other artefacts found on Franz Josef Land. The mind recoils from imaging the last days of those involved, as terrible as that which overtook the more famous Franklin expedition.

Nobody who had witnessed the Newport forging triumphantly through the Suez Canal during the lavish opening festivities could have guessed the appalling fate that awaited her four and a half decades later.