Skip to content
Steerage-passenger conditions on the North Atlantic

Steerage-passenger conditions on the North Atlantic

In a recent blog (Click here to read) about the disaster that overcame the SS Utopia in 1891, and which resulted in the deaths of 562 Italian emigrants, I commented briefly on the bewilderment and trepidation with which these people set out on the voyage in the first place. Added to this however must have been the extreme discomfort – not to mention health hazards – of overcrowding. The 350 foot- long Utopia carried 880 persons at the time of her sinking, 815 of whom were accommodated in what was known as Steerage. 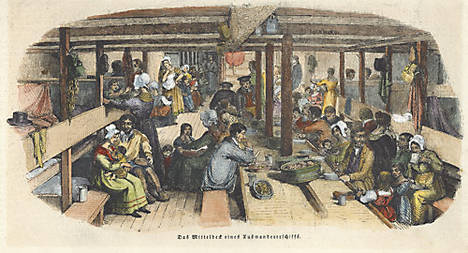 The term “Steerage” referred to a ship’s lower deck, originally that part aft through which steering tackles passed. With time it came to mean either converted cargo spaces, or specially designed accommodation, which provided the lowest cost and lowest class of travel. The great age of European emigration lasted almost a century, up to 1914, and through this time the standards applying in Steerage improved slowly, but only however to levels which would be considered wholly unacceptable today. The “coffin ships” which carried refugees from the Irish Famine in the 1840s were obviously immeasurably worse than the liners of the 1880s onwards, but conditions were, at their best, still unpleasant, and unhealthy in the extreme. 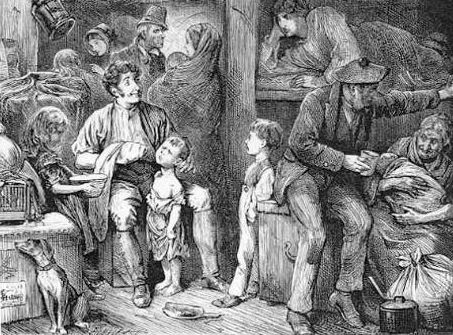 Ships were heading to Australia and New Zealand also, a voyage of months rather than weeks, and one which must have been particularly unpleasant in tropical latitudes. Emigrants were also streaming out from Scandinavia, Germany, Central Europe and Italy in this period, and large numbers were also going from Spain and Italy to South America. 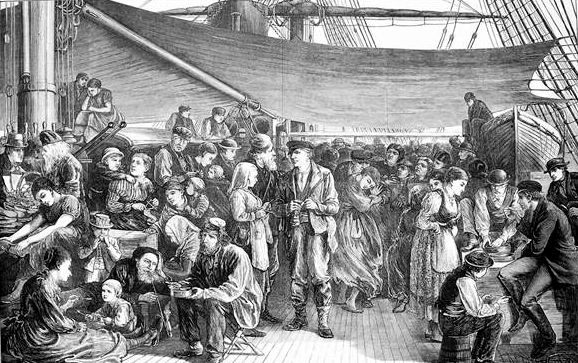 Some impression of what was involved can be deduced from an 1880s publication, The Sea, by Fredrick Whymper. He noted that in 1879 some 118,000 steerage passengers left the port of Liverpool for the United States. This figure was from one port only, the principal British one for emigration, but not the only one in the country from which emigrants departed.

Whymper noted that “the steerage of to-day is comparatively  decent; although it is not yet that which it should be, nor has the progress of improvement kept anything like pace with railway  accommodation of the cheaper kind. Yet one would think it to the interest of owners to make the steerage an endurable place of temporary abode.”

He goes on to describe some of the improvements referred to:  “Latterly a considerable amount of attention has been given to the sub-division of the steerage space, so that, when practicable, friends and families may remain together. Married people and single women have now separate quarters. The sleeping accommodations are the weak point. They are simply rough wooden berths, and the passenger has to furnish his own bedding, as well as plate, mug, knife, fork, spoon, and water-can.”

A typical bill of fare is mentioned:

Breakfast: “coffee, fresh bread or biscuit, and butter, or oatmeal porridge and molasses”;

Dinner (apparently at midday): “soup, beef or pork, and potatoes—fish may be substituted for the meat; on Sunday pudding is often added”;

“Three quarts of fresh water” – six pints – were allowed daily. It is not clear if this allowance included provision for washing – one fears that it probably did.

It was also noted that “A passenger who has a few shillings to spend can often obtain a few extras from the steward, and many, of course, take a small stock of the minor luxuries of life on board with him.” No mention was made by Whymper about sanitary arrangements – one hesitates to speculate about what was involved. 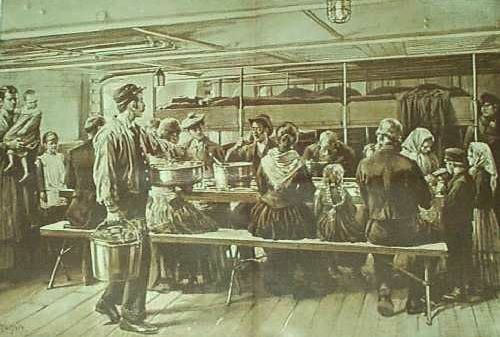 A word of advice was also given to those “of small means” who were contemplating emigration: “Intermediate (second-class) on board some of the Atlantic steamers to the States and Canada can be commended. For a couple of guineas over the steerage rates, excellent state-rooms, generally with four to six berths in each, furnished with bedding and lavatory arrangements, are provided. The intermediate passenger has a separate general saloon, and the table is well provided with good plain living. As the steerage passenger has to provide so many things for himself, it is almost as cheap to travel second-class.”

Regardless of class however the experience was likely to be a very unpleasant one indeed, especially in bad weather, when passengers could not go on deck. The imagination recoils from visualising the misery involved. For the victims of the Utopia disaster, and for many others now forgotten, the experience of a sea voyage  was to be more terrible still.

Conditions improved only slowly. Writing in 1907, a quarter century after Whymper, the American photographer Arthur Steiglitz described steerage on the prestigious liner Kaiser Wilhelm II (19,300-tons, 706-feet long, 962 officers and seamen, 1888 passengers). He noted that “200 to 400 sleep in one compartment on bunks, one above the other, with little light and no comforts”.

It was not surprising that “in rough weather, when the hatches are down … the stenches become unbearable, and many of the emigrants have to be driven down (off the open deck); for they prefer the bitterness and danger of the storm to the pestilential air below.” 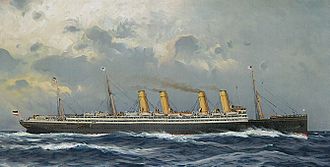 For all that the Kaiser Wilhelm II’s First Class opulence catering for Steerage passengers was wretched in the extreme: “The food, which is miserable, is dealt out of huge kettles into the dinner pails provided by the steamship company. When it is distributed, the stronger push and crowd, so that meals are anything but orderly procedures … the unsavory rations are not served, but doled out, with less courtesy than one would find in a charity soup kitchen”. 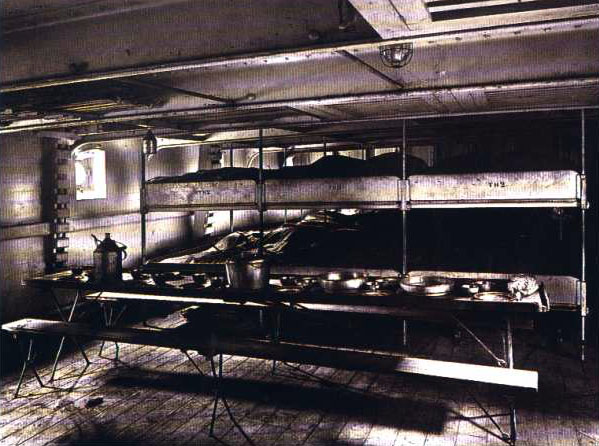 If these conditions applied on the 19,300-ton Kaiser Wilhelm II, which at one time held the “Blue Riband” for the fastest Atlantic crossing, then those endured by the doomed Italian emigrants on the humble SS Utopia can only have been immeasurably worse.

The courage of those who, often poverty-stricken, bewildered and desperate, set out to find a new life across the ocean cannot be praised too highly.

Note that if you are an Amazon Prime subscriber you can borrow any one of the six Dawlish Chronicles novels, free, each month. The novels are also available for purchase on Kindle.  If you’re a Kindle Unlimited subscriber you can read any, at any time, without further charge.