I recently encountered a remarkable account of a mutiny on a commercial vessel in 1828. It appeared in a book published in New York sometime in the late 19th century and magnificently titled “Thrilling Narratives of Mutiny, Murder and Piracy – A Weird Series of Tales of Shipwreck and Disaster, from the Earliest Part of the Century to the Present Time, with Accounts of Providential Escapes and Heart-Rending Fatalities.”  No writer is credited and I suspect that it may have been a miscellany of articles from different sources. The story of the mutiny is a fascinating one, well worth retelling, not least because of the extravagant terms in which the item was written. I’ve paraphrased it below, placing direct quotations from it in italics.

The sailing vessel Gold Hunter departed from Liverpool on 14th of April, 1828, en route for the United States. Her designation as a packet indicated that she most probably carried mail as well as her cargo of silks and broadcloths. Though such vessels also normally carried passengers, there were only two on board on this voyage. One was an Irish ex-army officer called Kelly and the second was his sister and they were crossing the Atlantic to visit family already settled in America. The writer was lyrical as regards the Kellys’ relations with the captain, named Newton, “a man of fine feeling and cultivated intellect,  who spent most of his leisure moments in their company; and many an evening, when the moon-beams played forth brightly on the rippling water, and the bellying of the canvass seemed to assure them they were hastening to the tender embraces of those they loved, would they sit together on the quarter-deck, while Miss Kelly enhanced the brilliancy of the scene by singing some of those wild, touching melodies which she had learned to warble on her own native hills.” 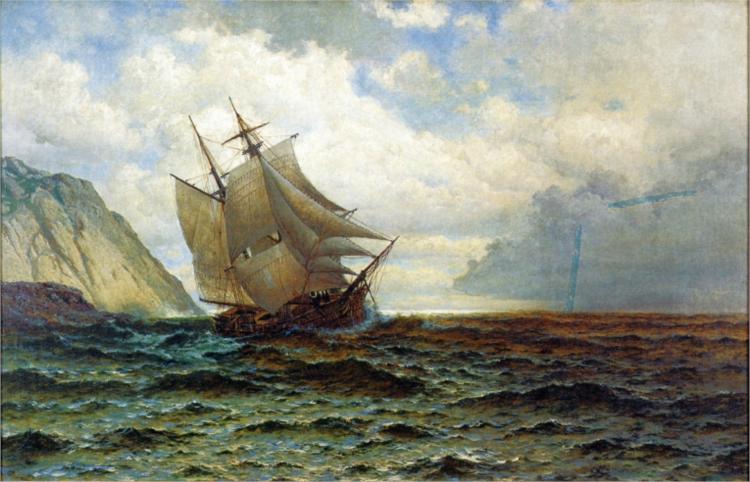 Gold Hunter was probably typical of the small traders of her day, as here in “Brigantine off the lee shore” by William Bradford 1823-92

The idyll was not to last however and on the 25th of April, Kelly, who was walking on the weather side of the main deck, accidentally overheard a conversation between four of the crew, who were caulking the seams of the ship’s long-boat. Kelly secreted himself to hear more. The men were aware of the high value of the cargo and were also confident that both the captain and Kelly himself were carrying substantial amounts of ready money. One of them noted that “the girl did not jingle her bag for nothing the other day, when she walked by me”.  A plan was under discussion “to wait until some dark, dismal night, when they would rush on the captain, himself (Kelly) and sister, and murder them in their beds, rifle them of their money, and take possession of the ship. It was their design to spare the life of the mate, whose services they needed as a navigator. After having done all this, they were to steer directly for the coast of Africa, where they hoped to dispose of the cargo to the negroes. If successful, they expected to carry thence to the West Indies a load of slaves—if not, to abandon the ship entirely, taking with them the specie, and whatever light articles of value they conveniently could.” 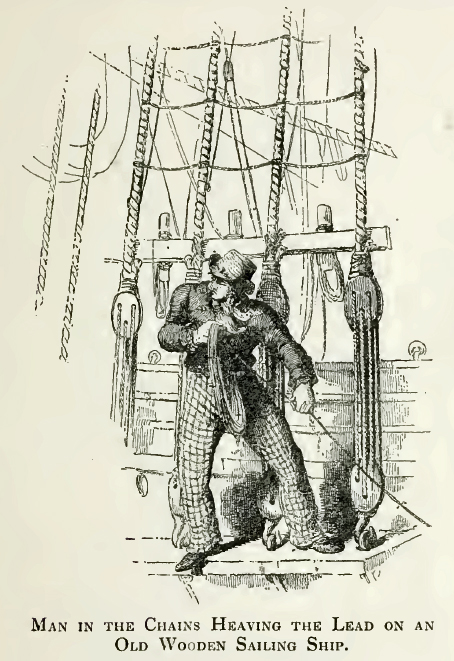 Kelly remained undetected and when he could safely slip away he revealed all he had heard to Captain Newton. They agreed that Miss Kelly should know nothing but they would remain vigilant as regards the plotters, especially the ring-leader, a seaman called Harmon.

The crisis was to come about sooner than expected. On the following day, in heavy weather, Harmon was at the helm – presumably to allow him to be kept easily under observation. He was handling the wheel badly and Captain Newton lost his temper – most unwisely – when he reproved him. Harmon responded “I can steer as well as you, or any other man in the ship” and this insolent answer drove Newton over the edge. He punched Harmon, who reacted just as violently, knocking him down on the deck.  “Harmon then deserted the helm, leaving the ship to the mercy of the tempest, and hurried forward to the forecastle, hoping there to intrench himself so firmly as to resist all attacks from without.”

Captain Newton now ran to find Kelly, the only man he felt he could rely on totally. Harmon’s action and his panicked flight had ignited the mutiny prematurely – losing the advantages that the action they had planned for a dark night would have had. Kelly, the army veteran accustomed to making quick decisions, realised that Harmon – and the other conspirators – must be neutralised immediately before they could organise themselves. He therefore headed for the forecastle with Captain Newton. Called on through a barricaded door to give himself up, Harmon refused. Kelly was determined to flush him out however and resorted to what would nowadays be classed as chemical warfare. Brimstone – sulphur – was available, presumably carried on board for fumigation purposes, and Kelly pushed smouldering pieces through any crevice in the forecastle timbers. It was obviously a desperate measure, since it could have set the entire ship alight, but Harmon and any others with him, guilty or innocent, were soon suffocating. The writer – no stranger to flowery language – noted that “Like the chafed, wounded, maddened bull, which his pursuers have surrounded, and which is drawing close about him his dying strength, for one last furious charge, was Harmon, when Kelly, with most provoking coolness, said, ‘Harmon, you shall leave that forecastle, or die there’.”

Harmon finally burst out but Newton and Kelly were waiting to either side of the door. He made “a desperate plunge at Capt. Newton, with his enormous case-knife. Had not Mr. Kelly, at this moment, by a dexterous effort, struck Harmon’s arm, one more immortal spirit would have been disencumbered of this “coil of mortality.” Instead of this, the villain was disarmed, and his dangerous weapon danced about harmlessly on the top of the waves. Harmon was now powerless; and they found no difficulty in putting irons upon him. During the whole of this contest, his associates did not dare to offer him the least assistance: on the contrary, each stood silently apart, eyeing his neighbor with fear and distrust.”

Miss Kelly seems to have been made of less stern stuff than her brother – “When Mr. Kelly returned to the cabin, he found that his sister had fainted away through terror.” All turned out well however – “Volatile salts, and the assurance that all her future fears would be entirely groundless, had the effect of restoring her very speedily.”

The Gold Hunter was at sea for another month, without further trouble, until she reached the port of Charleston, South Carolina, on the 23d of May – a measure of how long transatlantic voyages were under sail.  Once again, the writer waxed lyrical:

“The light-house was descried from the mast-head. Not a remnant of apprehension lurked behind; every pulse beat gladly; anticipated joys filled every bosom. It was not long before the revenue cutter, from which floats the stripes and the stars, was seen bounding over the billows towards the Gold Hunter. She was soon alongside, and, after an interchange of salutations between the vessels, the commander of the revenue cutter boarded the ship. After many inquiries, Capt. Newton requested the United States officer (a Captain Morris) to step into the cabin, where he laid open all the circumstances connected with the abortive conspiracy.”

“Capt. Morris,” said he, “I shall be obliged to call on you for assistance in bringing these men to punishment.”

“Such as I can grant,” replied Capt. Morris, “is at your service; but how shall we proceed?”

“Put the men into irons, and then I consign them to your safe keeping.”

These intentions were announced on deck; and if ever consternation and rueful dismay were depicted in human countenances it was in the case of those who had entered into the conspiracy, but who, till now, had supposed that all their plans were enveloped in midnight secrecy. Manacles were put on them all without difficulty, and they soon found themselves securely lodged on board a United States vessel.”

Harmon and his three confederates were arraigned before the Supreme Court of South Carolina on a charge of mutiny on the high seas.  The jury found them guilty, without leaving their seats. The surprising aspect was however that, in an age when the death penalty was freely applied, the sentences were relatively lenient – Harmon received five years in gaol and the others four years each.

And what became of Kelly and his warbling sister? The record is silent.