The Destruction of HMS Resistance, 1798

When thinking of the two decades of the Revolutionary and Napoleonic Wars, the hazards that come to mind that faced naval crews are primarily of action with the enemy. Many crews however never experienced combat but the normal hazards of the sea such as storms, grounding, founderings and shipwrecks continued as in peacetime. One such loss was that of HMS Resistance, a 44-gun fifth-rate frigate built in 1782 and well suited either to independent cruising or as acting as “the eyes” of a squadron.

On the 23rd of July, 1798 the Resistance, under the command of Captain Edward Pakenham, lay at anchored in the Banka Strait, the narrow waterway between South-Western Sumatra and the smaller island of Pulau Banka. At this period the Netherlands, in the form of the French-established Batavian Republic was an active ally of France, and the Dutch East Indies therefore became a theatre of war in its own right. It was not however Dutch or French forces that were to be the Resistance’s undoing however, for she was struck by lightning in the early hours of the morning. The flash must have penetrated to the magazine, for she blew up almost immediately.

One of the few survivors, a seaman called Thomas Scott, was later to report that he had been lying asleep on the starboard side of the quarter-deck – presumably in view of the heat and humidity – and was awakened by the flash, felt scorching heat and found his hair and clothes on fire. The explosion followed instantly and he knew no more until he found himself struggling in the water with others in the midst of the shattered fragments of the ship. Some of the starboard side remained intact, with the hammock netting at its top edge just above the water’s surface. Scott and the other survivors managed to clamber on to it and on taking a count found that there was a total of twelve only out of a crew of over three hundred. The sea was calm however and a raft was constructed from the wreckage by the few men able to work – the others were too burnt or bruised to assist. The improvised raft was completed soon after midday, one component being the wooden stock of an anchor, and its jury-rig consisting of the mast of the jolly boat – which had not survived – and remnants of the Resistance’s mainsail. That the survivors managed to build such a craft at all was a tribute to their skill and resourcefulness, though it was probably not more uncommon than could be found among other seamen of the era.

The coast of Sumatra was about ten miles distant and the raft began her wallowing progress towards it under sail. By seven in the evening however – by which time light must have all but faded – a gale blew up and the sea ran high. Now the rope lashings that held the raft together began to fail and the mast and sail were carried away. The anchor-stock broke free and floated away and, with the raft now crippled, Scott proposed to swim to it. Three others followed him and managed to reach it and cling on. An hour later they lost contact with the raft and those on it were not seen again.  Scott and the three with him drifted to shore. Their troubles were not over however as they were captured there by local Malays and enslaved. 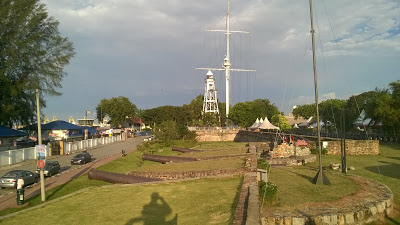 News of their plight reached the British governor, a Major Taylor, at Malacca, on the coast of Malaya directly to the north, and he sent a representative to the local sultan in Sumatra to secure their release. Three indeed had already been freed but Thomas Scott had been unlucky and had been twice sold onward as a slave. He was however traced, freed and brought to Penang – occupied like Malacca by the British – and from there he took ship back to Britain.

Ghastly as it was, the almost total loss of HMS Resistance’s crew was to be only one of such tragedies during these years of war but may well have been the only one attributable to a lighting strike.