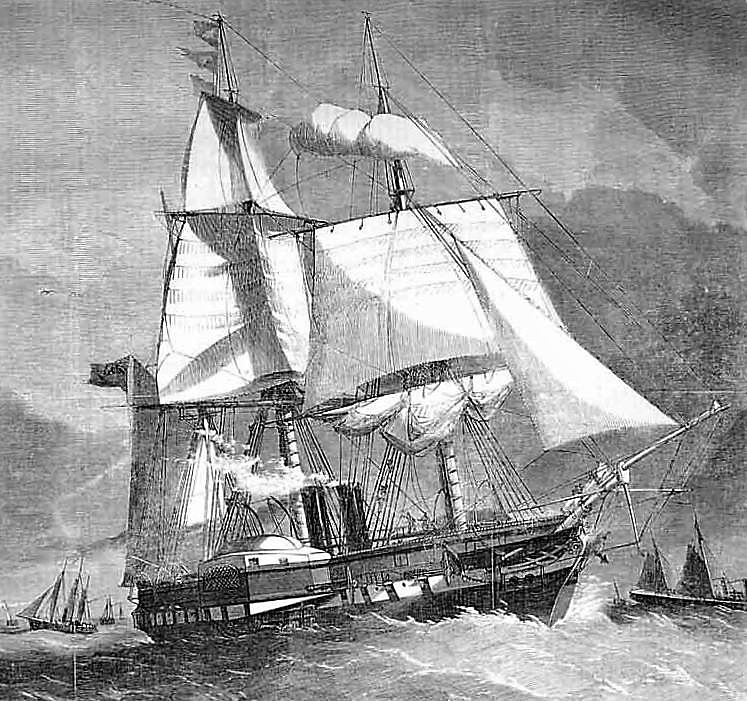 The Crimean War (1854-56) in which Britain, France, Turkey and Piedmont took on Russia is generally thought of in terms of the operations in the Crimea itself. Most notable of these were the Siege of Sevastopol and battles in its immediate support such as Balaclava, Inkermann and the stormings of the Malakoff Redoubt and the Redan. Operations did however take place in other theatres, most notably the Baltic, Eastern Anatolia and the Russian Pacific Coast (Click here to read blog of  18.08.17 about this). Prior to the landing of the large Allied invasion force in the Crimea in September 1854 there was however an earlier – and significant – naval action. This was the bombardment of the Russian Black Sea port of Odessa in April 1854. It was carried out by a combined British-French force and though it initially had a superficial quality of “an affair of honour” it was to have of powerful strategic implications.

Though hostilities between Russia and Ottoman Turkey had commenced in 1853 it was not until March 28th 1854 that Britain and France declared war on Russia and that planning for offensive operations, including landings in Russian territory, commenced. Normal protocol called for safe repatriation of diplomatic and consular staff from all combatant nations. As part of this process the Royal Navy paddle-frigate HMS Furious arrived at Odessa to bring off the British consul. She anchored outside the harbour with a flag of truce at her mast-head and sent in a boat, also with a flag of truce flying. As the boat left, with the consul, both boat and Furious were fired upon by a Russian shore-battery, happily without inflicting damage. 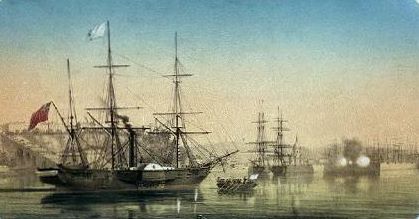 Outrage was predictable, felt not least by Admiral Sir James Dundas (1785 –1862), Royal Navy Commander-in-Chief in the Mediterranean since 1852 and a veteran of the Napoleonic Wars. He ensured that a combined Anglo-French squadron was hastily assembled and he addressed a note to Odessa’s Russian governor, General Osten-Sacken, demanding “that all the British, French, and Russian vessels now at anchor near the citadel or the batteries of Odessa be forthwith delivered up to the combined squadron; and that if at sunset no answer or a negative be received, they will be compelled by force to avenge the insult offered, though, for humanity’s sake, they adopt the alternative with regret, and cast the responsibility of the act upon those to whom it belongs.” No satisfactory reply was received and action was now inevitable. 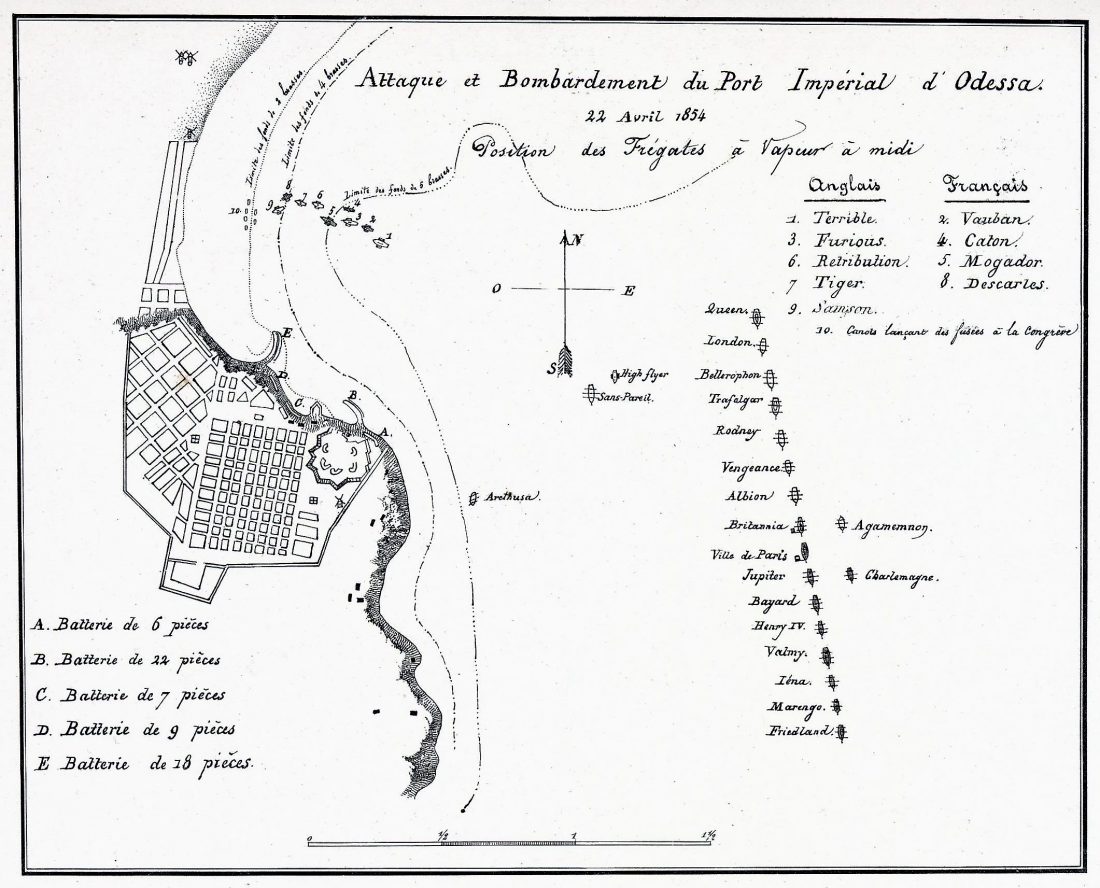 The British-French squadron arrived off Odessa on April 22nd and its composition was a clear indication that the Age of Fighting Sail was well past.  The numerically largest component was a total of eighteen wooden line-of battle ships, of which twelve were British (including the embarrassingly-named HMS Trafalgar). These were however kept offshore out of shore-battery range – the Russian destruction of the Ottoman Turkish felt at Sinope the previous year had shown just how vulnerable wooden ships were to modern shell-fire. The responsibility for bombardment of Odessa was therefore allocated to smaller, and more manoeuvrable vessels, all of which, other than a single British sailing frigate, HMS Arethusa, had steam power as either their primary means of propulsion.  The French contributed four steam paddle-frigates, the Descartes, Caton, Mogador and Vauban, and the British five generally similar vessels, Furious, Retribution, Sampson, Terrible and Tiger. The later may be regarded as representative of these vessels – of 1300 tons and 206 feet long she carried fourteen 32-pounder guns along her flanks, plus two 10-inch on deck-mounted pivots. 400-hp engine power drove her twin paddlewheels and these, by their size and location, represented her greatest vulnerability. It is notable that the bombardment force also included six ship’s boats armed with 24-pounder rockets, a 19th-century version of modern missile-craft.  Also present was the 21-gun screw-frigate Highflyer, and the 70-gun steam ship Sans Pareil.

The Sans Pareil represented a “last gasp” of the wooden ship-of-the line. She had been laid down in 1845 as an 80-gun “second rate”, a sailing vessel generally similar to the first  HMS Sans Pareil, which had been captured from the French a half-century previously. While still on the stocks she was recognised as an anachronism and work on her in this form was suspended in 1848. She was modified thereafter to employ steam propulsion – a 622-hp engine driving a single screw and giving a speed of 7 knots. The steam plant resulted in a reduction of the number of guns to 70, all 32-pounders, and her sailing rig was maintained. Of 3,800 tons and 200 feet long, only the presence of her smoke-stack made her look any different to a vessel of the Nelsonic era. 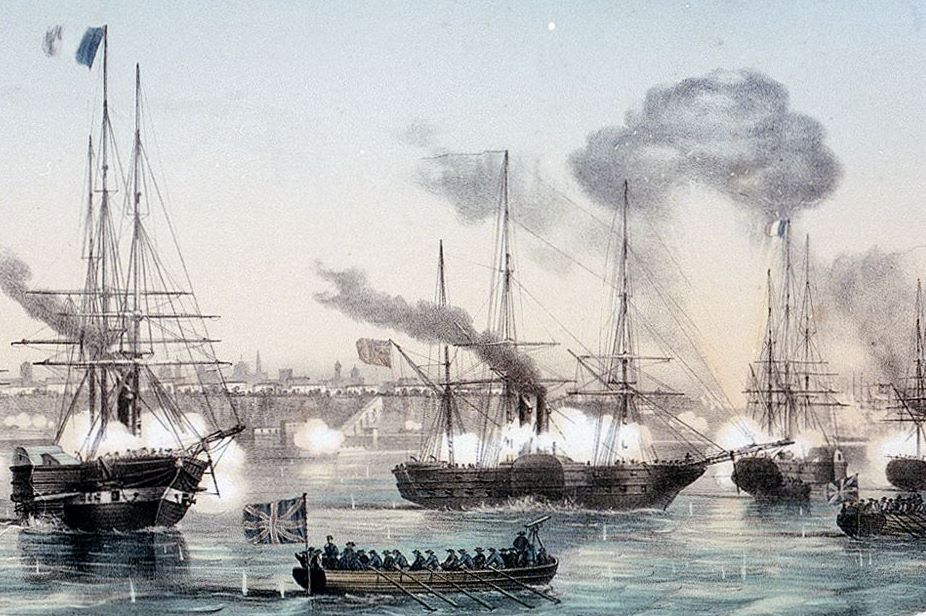 Contemporary depiction of the bombardment – note close range involved.
Note also boat in foreground with launching tube for 24″ rocket in the bows

The bombardment commenced at dawn on April 22nd with Descartes, Sampson, Tiger and Vauban opening fire on the Russian positions at a range of 2,000 yards. In an echo of an earlier age Vauban was hit by heated shot which started a fire aboard and caused her to drop out of line. Furious, Retribution, Terrible and Mogador then joined the attack, while Arethusa, Highflyer and Sans Pareil stood in reserve further out. Terrible scored the most notable triumph of the bombardment, a hit on a magazine on the Imperial Mole which caused a spectacular explosion. The action continued for ten hours, during which some 24 Russian ships in the port were set on fire and several interned British and French merchantmen took advantage of the confusion to escape. The rocket boats were meanwhile dedicated to initiating conflagrations in the dockyard storehouses. During the afternoon the Arethusa also came inshore to engage shore batteries. By the time the action was broken off at 1730 hrs much of the town and port facilities were on fire. Odessa had been essentially eliminated as an operational Russian base and was to remain so for the rest of the war. 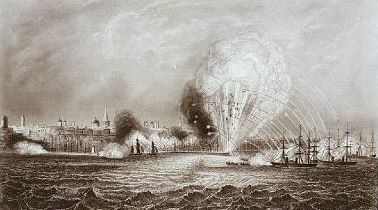 The explosion of the magazine on the Imperial Mole

Some bitter satisfaction – albeit a minor one – was however to be accorded to the Russians. An Allied naval presence was maintained off the port and on May 12th, during a thick fog, HMS Tiger ran on to rocks five miles south-west of Odessa.  Her guns were dropped overboard to lighten her and her boats dropped anchors to allow her to warp herself off, though to no avail. She then came under fire from Russian field artillery that had arrived on the cliffs above. Burning, and with her captain and others severely wounded, there was no option but to strike her colours. Her engines were later recovered by the Russians and installed in the imperial yacht, appropriately names “Tigr.” HMS Tiger’s Captain Giffard, who had lost a leg, died of gangrene three weeks later and was buried at Odessa with full military honours. Four others also died of wounds.

The attack on Odessa is one of the few occasions when a naval bombardment of shore defences proved successful in the eighteenth and nineteenth centuries – indeed Nelson himself had warned that “A ship’s a fool to fight a fort”. Boldness alone did not account for the success, and due account must be taken of manoeuvrability of steam-propelled craft and the protection this gave when they came under fire from shore. Credit is also due to Dundas for his decision to keep his larger – and more vulnerable – ships out of the fray. Otherwise undistinguished as a senior commander, his neutralisation of Odessa was to be critical in allowing the subsequent invasion of the Crimea and the uninterrupted supply of the forces landed there.