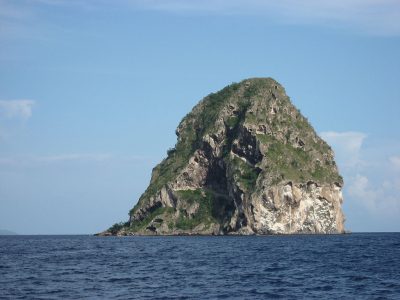 A steep rock, three-hundred yards diameter and all but circular, some 570 feet high, became the scene of one of the most spectacular exploits of the Royal Navy during the Revolutionary and Napoleonic Wars. Located off the southern tip of the strategically important French-held island of Martinique, its fortification and defence from early 1804 to mid-1805 allowed British forces to bring under fire the approaches to the port of Fort-de-France, a base for French privateers. The challenge was however to get the necessary men and equipment ashore since much of this uninhabited pillar of basalt is all but vertical and access was only possible on the western side.

Responsibility for the blockade of Martinique devolved on Commodore Samuel Hood (1762-1814), not to be confused with his cousin, the illustrious Admiral Sir Samul Hood (1724-1816) who would later give his name to Britain’s most famous battlecruiser. In January 1804 Hood recognised the rock’s potential – the elevation would lengthen the range of cannon mounted high there and would also make them immune to enemy fire from sea level. The operation started by landing a 24-pounder by a launch from Hood’s flagship, HMS Centaur, at the single cove at sea-level where a landing was possible – in itself no mean feat, since a weapon of this size weighed two and a half tons – and setting up forges and artificers’ workshops in a cave there. Men were now sent to scale the rock, using ladders and ropes, and to clear terraces and caves for camping. Vegetation was burned away, bats scared off and paths and platforms blasted for mounting cannon. An especial problem was that the rock was home to fer-de-lance vipers, one of the deadliest poisonous snakes of the Americas. The rock provided neither food nor water, so that both had to be landed and stockpiled.

Now came the most difficult task of all – getting the guns up the rock by means of a hawser stretched between the base of the Centaur’s mainmast and the rock itself. This established a “flying bridge” along which the guns and other stores were conveyed in cradles. Personnel also ascended this way on occasion – it was recorded that a Captain Vaughan, of HMS Imogen, another vessel in the squadron, was stuck for a considerable time in mid-air. This resulted from his wig getting caught in the sheave of the rope pulling the cradle along the hawser – one is impressed that even on active service of this sort an officer felt it de rigeur to wear his wig.

One of the other officers was to write “Were you to see how, along a dire, and (I) had almost said a perpendicular acclivity, the sailors are hanging in clusters, hauling up a 24-pounder by hawsers, you would wonder. They appear mice hauling little sausages; scarcely can we hear the governor on top directing them with his trumpet, the Centaur lying close under it, like a cocoa-shell to which the hawsers are fixed.” It should be mentioned that the Centaur’s captain was the splendid Murray Maxwell, whose later dramatic exploits were dealt with in a previous blog (Click here to read it if you’ve missed it). 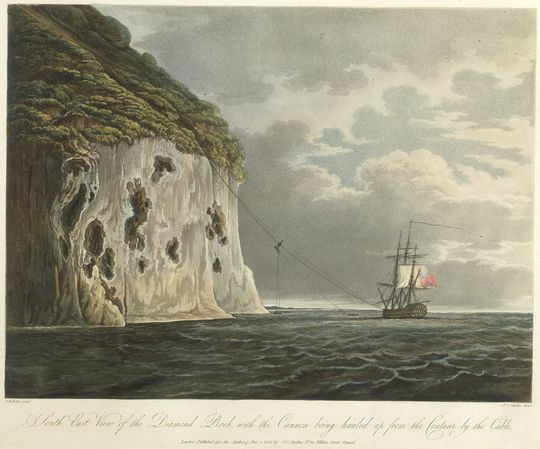 Hoisting the cannon from HMS Centaur up on to Diamond Rock

Two 24-pounders were installed in a cave near sea level (one thinks of The Guns of Navarone!), another 24-pounder halfway up the rock and two 18-pounders at the top. The garrison of the rock – or rather its crew, since it was classed as the sloop HMS Diamond Rock – was placed under command of James Wilkes Maurice (1775-1857), the Centaur’s first lieutenant. He also had at his disposal a number of small boats, including one armed with a 24-pounder carronade, for attacking French vessels that might try their luck under cover of darkness. Maurice established his command position in a small grove of fig-trees under an overhang. A major concern in the coming months was to be hygiene for which – in the delicate wording of a contemporary chronicler –“a very circumscribed locality” was established and “Very stringent regulations were laid down, in order to enforce attention to them, any of whatever rank transgressing them was appointed scavenger of the rock, until he should discover a fresh delinquent.” This obligation was laid on officers and men without distinction and the “scavenger” was required to carry a broom for clearing up. On one occasion a West Indian seaman “upon whom these duties devolved most frequently, discovered Captain Crozier, the marine officer, transgressing the standing orders, and without ceremony placed the broom, the symbol of his occupation, in the captain’s hands.” The gallant marine-captain, who must still be turning in his grave for being remembered in this way, “was coolly informed that, it was his duty to keep the rock clean, until he found another upon whom he could saddle that unpleasant duty.” 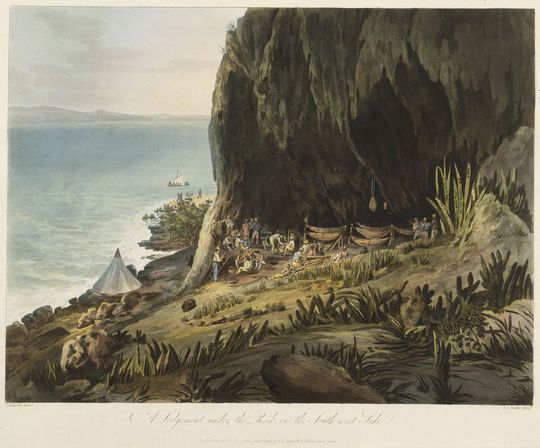 The main camp on Diamond Rock – Martinique in the background

The work was completed in a remarkably short time and in early February 1804 Hood named the rock Fort Diamond. It was subsequently decided that it was to be considered a captured enemy ship, and henceforth rated as the sloop HMS Diamond Rock, with Maurice as her commander. His crew consisted of about a hundred officers and men, including a surgeon, purser, and a junior lieutenant to command the small supply vessel. A hospital was established, and food, gunpowder and ammunition were imported by boats, initially from HMS Centaur and later from Martinique itself, where some residents were only too pleased to trade secretly with the enemy. The greatest problem remained water, which had to be brought from the island, and stored in cisterns constructed on the rock. 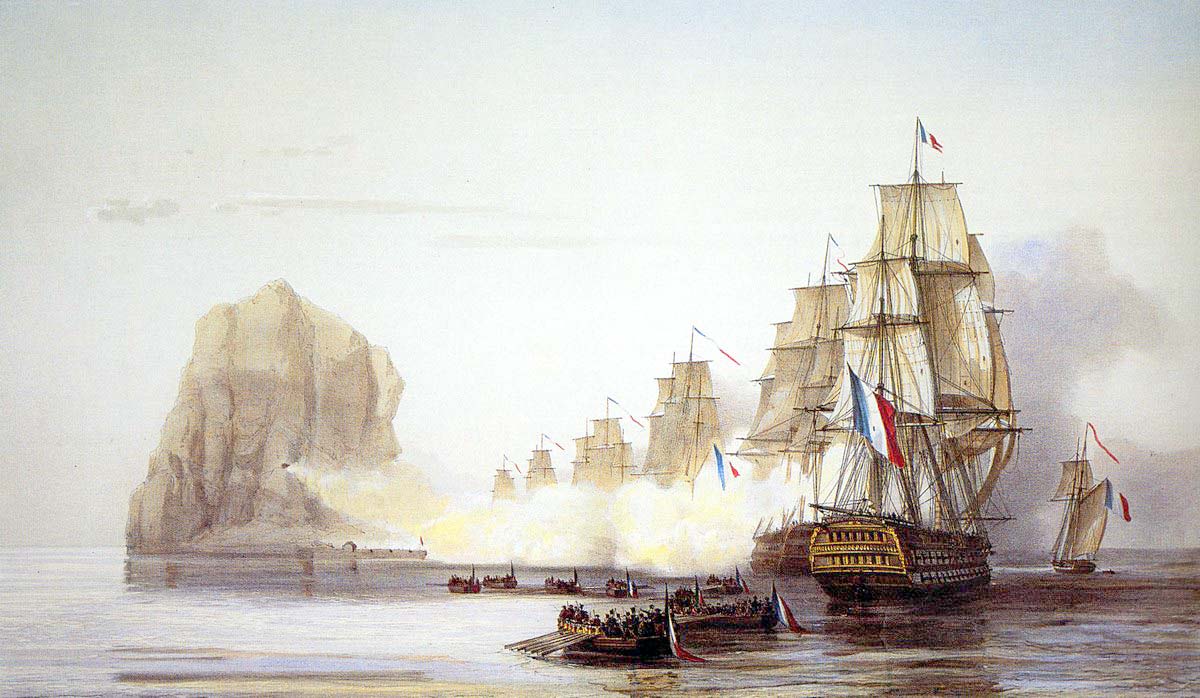 HMS Diamond Rock held out for seventeen months and withstood several French attempts from Martinique to take it. The crunch came however in May 1805 when the French admiral Pierre-Charles Villeneuve (1763-1806), who had arrived with his fleet in the West Indies in what amounted to the prelude to the Trafalgar campaign, made a short-duration bombardment. The resulting tremors struck HMS Diamond Rock at her most vulnerable point – the main cistern, containing a month’s supply of fresh water, had been cracked and the water seeped away. Unaware of this, Villeneuve gave orders for capture of the rock. The force allocated to the attack were considerable – two “74s”, Pluton and Berwick, the 36-gun frigate Sirène, a corvette, a schooner, eleven gunboats and some three hundred troops, under the overall command of Captain Julien Cosmao (1761-1825), himself to be a hero at Trafalgar five months later.

Maurice decided, wisely, that the lower levels of the rock were indefensible and withdrew his force to higher up. On May 31st the French opened an intense bombardment to cover the landing of their troops at the cove. The opposition was fierce and three gunboats and two boats full of soldiers were sunk by fire from the rock as they did so. The French’s slow battle to progress upwards now began – a bloody business, since the sheer rock sides limited the approach to individual pathways. Maurice and his crew held out unto June 2nd, by which their ammunition and water were expended. Thirst was taking its toll – during the last twenty hours, while labouring under a merciless sun, the men had only a pint of water each. On the last morning of the siege, when no water remained, six heroes volunteered to go down a dangerous path, exposed to the enemy’s fire, to a spring that oozed about two pints of water a day. They succeeded and returned unhurt. A touching indication of the regard in which Maurice was held his men was that they brought back with them a teakettle full of water for his sole use. An ideal leader to the end, he declined to accept it and shared all equally with his men. 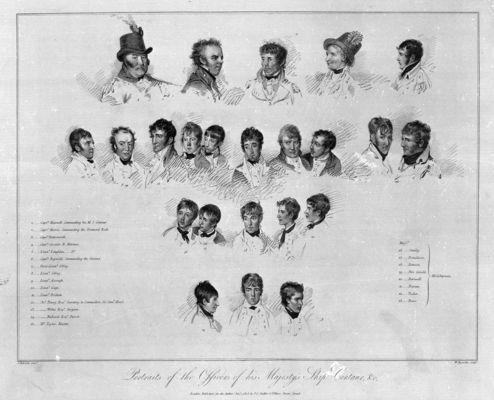 A contemporary collection of portraits of officers involved in the Diamond Rock epic. James Maurice (here spelt as “Morris”) is second from left, top row

With further resistance clearly useless, Maurice sued for terms and was allowed to surrender his 107 officers, men and boys honourably and to be returned to the British-held island of Barbados. His losses had been small – two killed and one wounded – but the French had suffered much more badly, having lost about seventy men, many cut down by grape-shot poured down on their exposed decks from the British batteries above. Since the rock had been classed as a sloop, Maurice had to be court-martially for her loss when he arrived back in Britain. He was however honourably acquitted and indeed received the praise of Nelson himself, who ensured that he was given command of the 18-gun brig-sloop HMS Savage on 20 August. Though due to join Nelson off Cadiz, the Savage was not however ready in time to play a role at Trafalgar.

James Wilkes Maurice had further distinguished service ahead of him, ending as a vice-admiral. We may meet him again in a later blog, once more in command of an island garrison.

Kindle version available on Amazon.com and Amazon.co.uk by clicking these links:

Kindle Unlimited subscribers can read at no extra charge. Also available in paperback.

Note that you don’t need a Kindle device. You can read on a cell phone, an ipad or a laptop. Here are links for downloading the App: