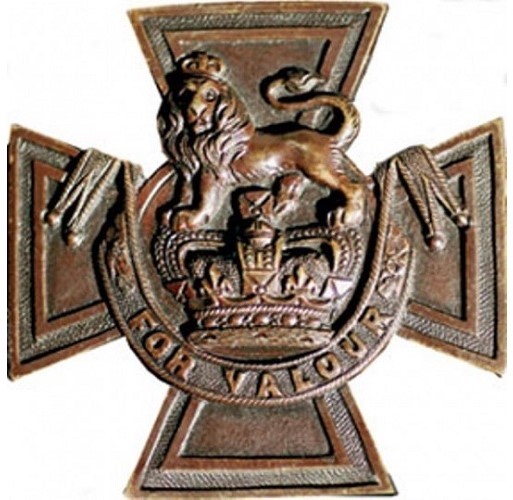 Ever since the Crimean War (1854-56) the Victoria Cross has been the highest award for British service personnel for gallantry in the face of the enemy.  It takes precedence in order of wear over all other British orders, decorations, and medals, including the Order of the Garter.  Instituted by Queen Victoria in 1856 it was revolutionary at the time of introduction in that award made no distinction between officers and enlisted men.  Of some 1358 awarded since then, only fifteen have been won since the end of WW2. The medal is of bronze taken from Russian cannon captured at Sevastopol and these cannon themselves may have been of Chinese origin. 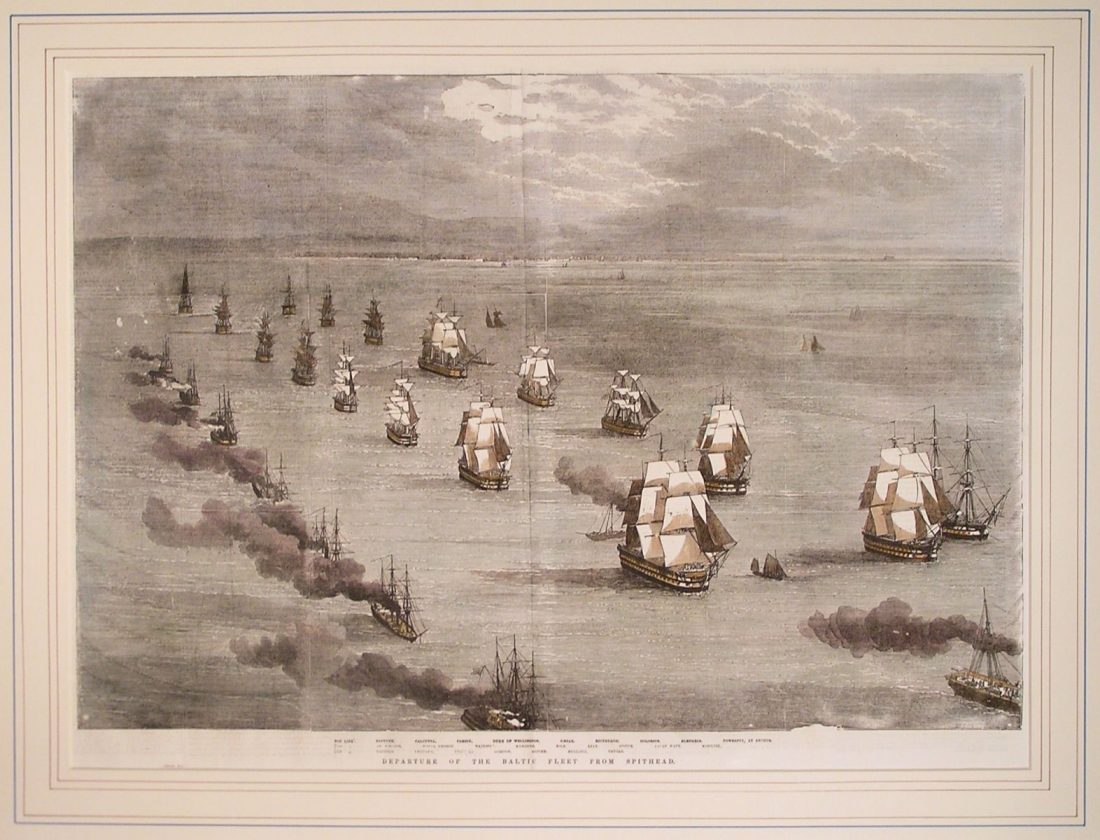 Departure of  the Baltic Expedition from Spithead 1854

Though the first Victoria Cross was won in the Crimean War the heroism that won it took place not in the Crimea but in the Baltic. Britain and France entered the war against Russia in March 1854. In parallel with efforts to invade the Crimea measures were also put in hand to send a vast British fleet to the Baltic to neutralise fortifications protecting the approaches to St. Petersburg and seal it off. The execution left much to be desired however. “A finer fleet never sailed or steam from Spithead than that destined for the Baltic in 1854” according to the future Hobart Pasha. Referring however to the overall commander, Sir Charles Napier, known as ’Fighting Old Charley’, Hobart went on to write that “it was not long before we discovered that there was not much fight left in him.” 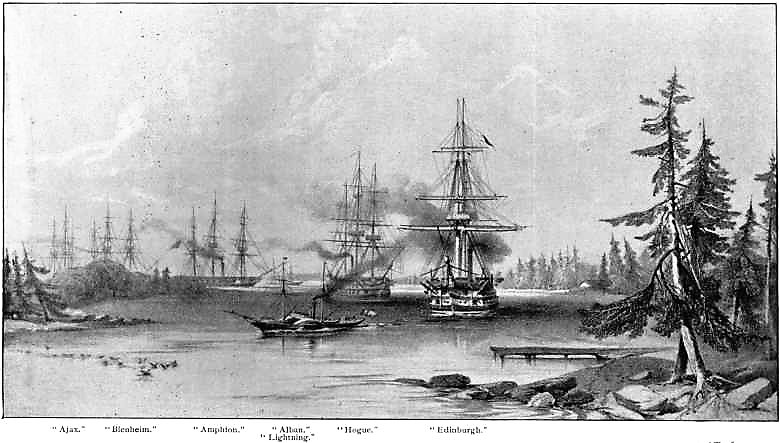 The initial British objective was the incomplete Russian fortress of Bomarsund in the Åland Islands. This was  vulnerable to land-attack since the designers had assumed that the narrow channels near the fortress would not be passable for the large ships needed to land troops. This assumption was valid for sailing vessels but it took no account of the fact that steam ships could manoeuvre with greater ease and thus bring weakly defended sections of the fortress. One gets the impression that the focus on Bomarsund was due to its accessibility rather to any significant strategic importance and Hobart, in his memoirs, hints that dissatisfaction with the decision was widespread. He wrote: “if ever open mutiny was displayed – not by the crews of the ships, but by many of the captains, men who had attained the highest rank in their profession – it was during the cruise in the Baltic in 1854.” 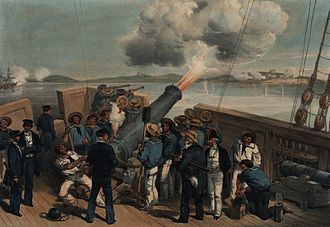 On 21st June 1854, three British ships, Hecla, Odin and Valorous, came close enough to begin bombardment. Russian fortress-artillery replied and the action lasted most of the following night. At its height a live shell, its fuse hissing, crashed on to one the deck of the Hecla, a wooden paddle-sloop. Given that this vessel was wholly unarmoured, it seems an act of the grossest folly to have exposed ever her in this way.  Only seconds remained before the shell would explode and orders were shouted for everybody to thrown themselves flat.  On deck however was the twenty-year old Midshipman Charles Davis Lucas (1834 – 1914), who had already served seven years, a period that included the Second Burmese War . Rather than throw himself down Lucas grabbed the shell, dashed to the side and threw it overboard. It exploded on hitting the water. No further damage was done, nor were any of the crew wounded. The indecisive action was broken off shortly afterwards to wait until British and French reinforcements would arrive. 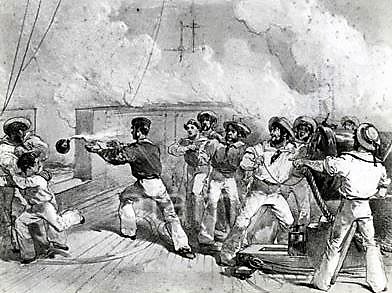 Lucas’s action had saved the Hecla, but given the reward structure in place at the time the only recognition possible was for her captain, W.H. Hall, to promote him to the rank of Acting Lieutenant.  The Crimean War was the first to be covered extensively by the newspapers and Lucas’s behaviour, together with other individual acts of bravery, was widely reported. The outcome was a motion in Parliament “that an Order of Merit to persons serving in the army or navy for distinguished and prominent personal gallantry to which every grade should be admissible” should be created.

Though Lucas was the first winner, he was not however the first to receive his medal in the inaugural award ceremony in June 1857. This was held in London’s Hyde Park and it was estimated that over 100,000 people came to watch. Queen Victoria pinned the crosses on the recipients in strict order of Service precedence and seniority. Lucas was therefore fourth in line, following three more senior recipients, the first being Commander Henry Raby. Lucas may however have been lucky to miss the first slot – the Queen conducted the tricky operation of pinning on the medal from horseback. In the process , and by accident, she plunged the double-pronged pin for holding the medal into Raby’s chest. This was presumably a minor inconvenience compared with the dangers he had been exposed to while winning the medal! 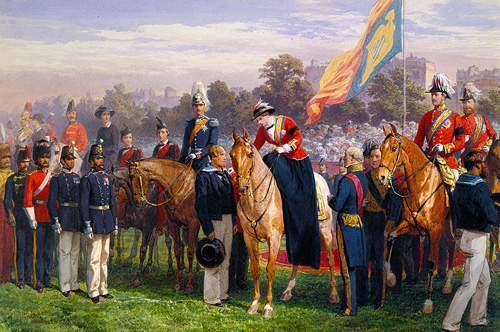 Lucas went on to have a distinguished naval career, promoting to commander in 1862, to captain in 1868 and retiring in 1873, making rear-admiral on the retired list in 1885. It is pleasing to note that he married the daughter of Captain Hall of the Hecla. He was to live on until 1914, another of those naval officers who joined a service still commanded by veterans of the age of Nelson, but who themselves lived to see technological innovations of the early 20th Century such as turbines, radio, aircraft and submarines which were to change the nature of sea warfare.

Technology changes but human nature doesn’t. The Victoria Cross remains today, as it did in 1854, the recognition of human courage at its most sublime.