Skip to content
SS Archimedes – arrival of the screw propeller 1839

If anyone is challenged today to draw a simple picture of a ship, there is probably a high likelihood that they’ll draw a long hull, a smaller superstructure above it, one or more funnels and the assumption that it is driven through the water by a screw propeller. This is our modern paradigm of “a ship”. Were the same request made in the 1830s however the answer would be very different, with a large paddle-wheel halfway along the side, and the implication that it would be matched by another on the far side. The earliest steamships were driven by all driven by paddles and the screw propeller, which we take for granted today, had not yet arrived. The SS Archimedes was to change that in 1839. 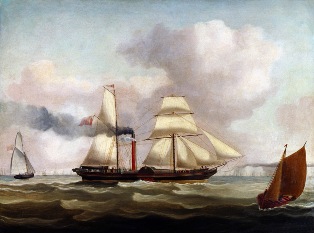 So how did the propeller – insignificant in size by comparison with the more dramatic paddle-wheel – achieve its prominence and drive its competitor from the worlds’ oceans? The surprising answer goes back to the Third Century BC and the great scientist and mathematician Archimedes (287 BC – 212 BC). Any of us who have studied physics, even at the high-school level, will be familiar with the principle named after him, the recognition that a body immersed in a fluid experience a buoyant force equal to the weight of the fluid it displaces. There was much more to Archimedes than that – including mathematics that prefigured Newton’s and Leibnitz’s invention of Calculus almost eighteen centuries later – and he gave his name to one of the most complex technical creations of ancient times, the Archimedes screw. 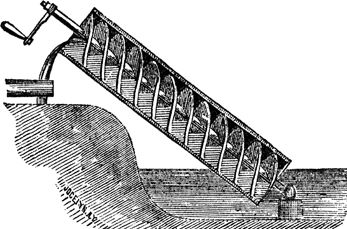 This device was a long helical spiral set either in a tube, or in an open trough, and when rotated could lift water from a lower level to a high. Sophisticated versions, some very large, are in use today. (It’s worth looking at “Archimedes Screw” on Google images). In the past, when the power to them was limited to windmills or by animal or human labour, their capacity was limited though they did find their uses in irrigation, or land reclamation or mine drainage. The advent of steam power from the 18th Century onwards allowed them to shift significantly larger quantities which, when discharged, could generate powerful axial forces. The potential existed therefore for their use for propulsive as well as drainage purposes. 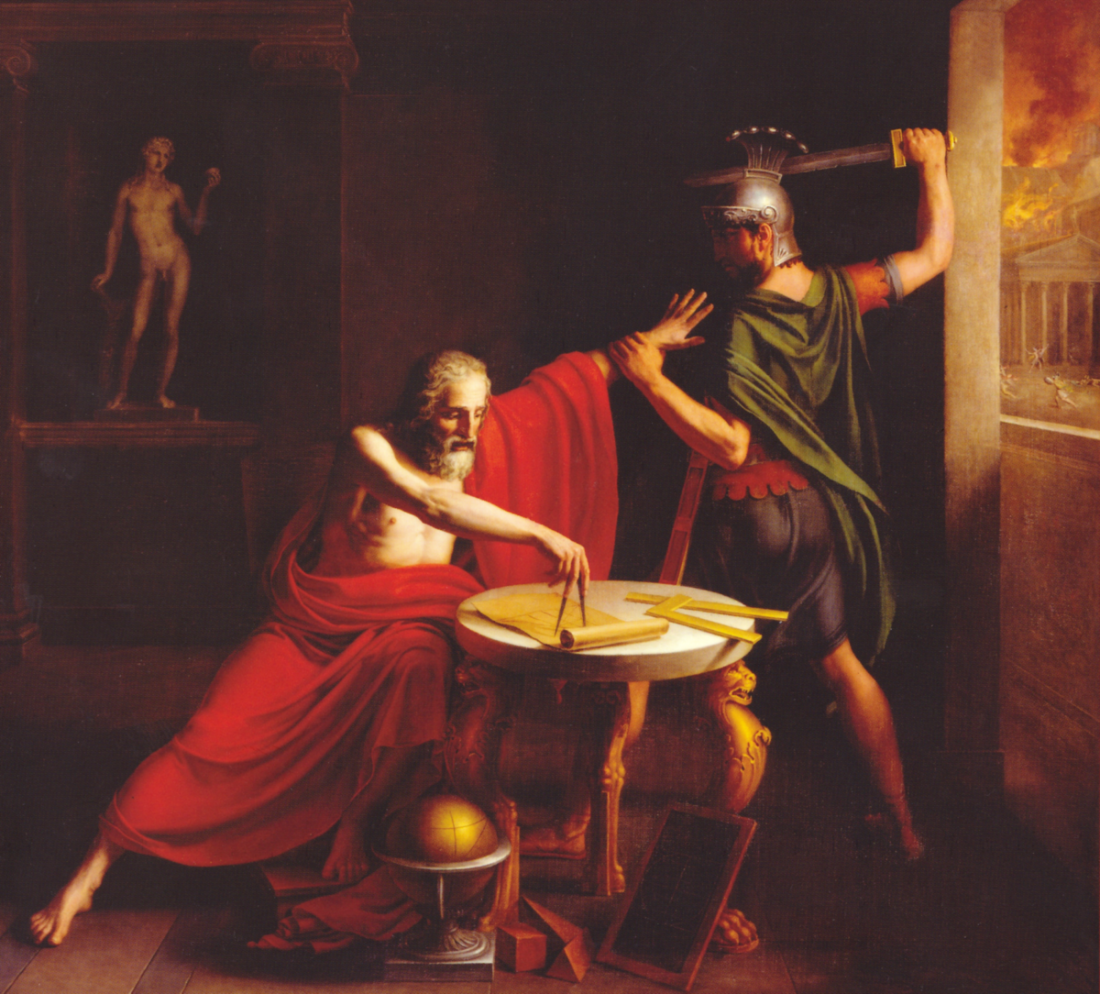 Before jumping on in more detail to the Age of Steam it is sad to record what became of Archimedes.  His native city of Syracuse, in Sicily, was besieged by the Romans and he was instrumental in developing machines for its defence. When the city fell orders were given to capture him alive as his expertise was so highly valued – prefiguring the American efforts to capture of Nazi rocket-engineers in 1945 – but a Roman soldier who had either not heard or had not heeded the order burst in on Archimedes. He found him engrossed in geometric studies and was greeted with the request “Do not disturb my circles!” Archimedes was butchered anyway.

Steam power was first applied successfully and profitable, by Robert Fulton, in 1807. Propulsion was by paddle-wheels, a logical development from the water-wheels that powered so much industry of the time. Used on calm water, as Fulton’s craft demonstrated on the Hudson River, paddles were very efficient and for the next two and a half-decades they became the standard method of steam-ship propulsion.

Effective as they might be on rivers and lakes, paddles were however less effective on the open sea, especially when the vessel was rolling so that one wheel was exposed while the other dug deep, thus placing a heavy and rapidly varying load on the engine. The potential for paddle-steamers as warships was also limited since in any ship-to-ship or shore-to-ship action involving heavy guns the large-diameter paddles would represent large and vulnerable targets. For all these reasons the search was on for a propulsive system that could be accommodated below the waterline, and therefore less subject to sea conditions and less vulnerable to enemy fire.

Thoughts now turned to screw propulsion and in the 1830s many patents for such were taken out, few reaching the testing stage and fewer still offering promise.  Efforts focussed on modifying the Archimedes screw for marine use were however promising. One such attempt is sketched in a patent granted to Francis Pettit Smith (1808 –1874) in 1836, as shown below. 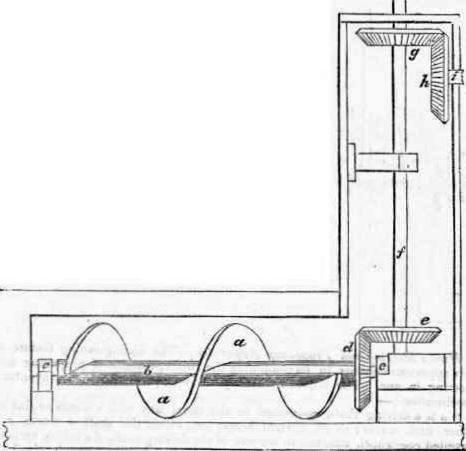 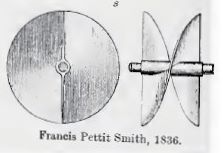 Testing was to prove that two or more complete turns of the spiral were not required and the modified version had a single turn, as shown on the right. These tests, conducted on a small craft, were successful enough for Smith to convince investors, and the prestigious Rennie engineering firm, to establish a new company named the “Ship Propeller Company”.  This new venture committed to construction of a 237-ton, 125-feet long vessel of 22.5 -feet beam. Her lines – essentially those of a schooner – were selected for minimum water-resistance and her slender, raking funnel and masts (she carried sail as well as steam power) gave her an elegant appearance. Installed power was nominally 80-horsepower though in practice this proved to be closer to 60. The name chosen was, most appropriately, Archimedes. 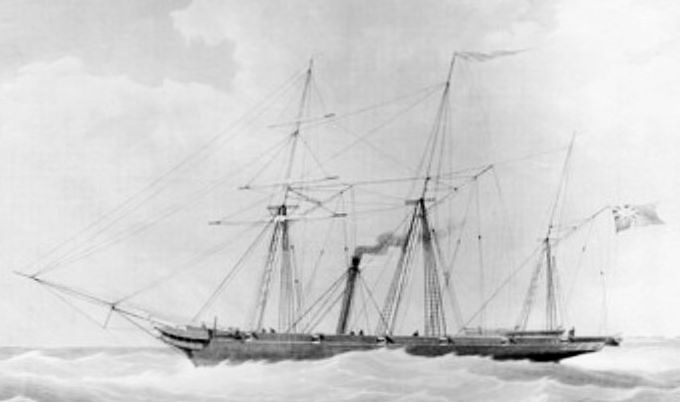 Look, No Paddle Wheels! The Archimedes under steam power

Initial trials in 1839 were impressive – a speed of 10 knots was achieved on her first open-sea passage from London to Portsmouth. There she was tested, again satisfactorily, against comparable Royal Navy ships, all paddlers.  Disaster struck on the return voyage – a boiler exploded, causing casualties, – but the accident had nothing to do with the screw propulsion and Archimedes was soon available for further trails. These included evaluation against the Royal  Navy’s paddle-driven Dover-Calais mail-packets, the fastest of which, and closest to Archimedes in size and power, was HMS Widgeon. The latter proved slightly faster in smooth seas – which obviously favoured the paddles’ deep bite, but it was concluded that as regards power-to-weight ratio, the screw propeller had proven “equal, if not superior, to that of the ordinary paddle-wheel.” The scene was set for the Royal Navy’s own first venture into screw propulsion – but we’ll leave that for a later article. 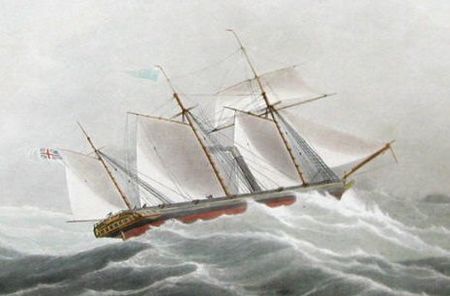 Even more exhaustive tests followed – including a circumnavigation of Britain and a fast passage from Plymouth to Oporto in Portugal. Excited by these results, Britain’s premier engineer, Isambard Kingdom Brunel, was involved in having the Archimedes loaned for further tests to the Great Western Steamship Company, for which he was then constructing the world’s largest steamship, the SS Great Britain. Brunel had the vision – and indeed the audacity – to settle on this new means of propulsion. Following a series of tests of different propeller types it was decided to fit the Great Britain with a four-bladed type designed by Smith. 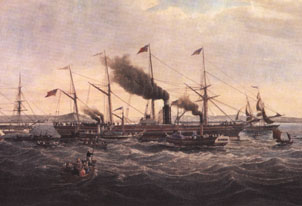 The Great Britain brought new standards of speed and comfort to North Atlantic travel (even if Charles Dickens was less than complimentary about the accommodation when he crossed in 1842). Though ocean-going paddle steamers were still constructed – including by Brunel himself – the Great Britain’s success, made possible by that of the Archimedes, had confirmed that the future lay in screw propulsion. (The Great Britain survives, in a restored state, in the British port of Bristol).

And the Archimedes? For all her technical success, Smith and his investors lost heavily – some £50,000 in money of the day, worth tens of millions in the 21st Century.  The Royal Navy did not purchase her, as Smith had hoped, and she was sold on by the Ship Propeller Company. She was to suffer the indignity of having her engines removed and converted to a sailing vessel. She was wrecked, as such, off the Dutch coast in 1864, an ignominious end for a ship that had made history. It is however pleasing to record that Smith’s later career was a satisfactory one, including appointment as Curator of the Patent Office Museum in South Kensington and a well-deserved knighthood in 1871.

And the implications of the Archimedes for the Royal Navy? We’ll read about that soon in a future blog.