When reading of the losses of Royal Navy warships in the Age of Fighting Sail, whether in battle or by shipwreck, one is struck by the professionalism and discipline of both officers and men in the most appalling circumstances. An earlier blog, concerning the aftermath of the wreck on HMS Alceste in 1817 is about an outstanding example (Click here if you have not read it previously). It is therefore somewhat of a shock to read of the massive breakdown of discipline that surrounded the loss of the frigate-turned troopship, HMS Penelope, in 1815. 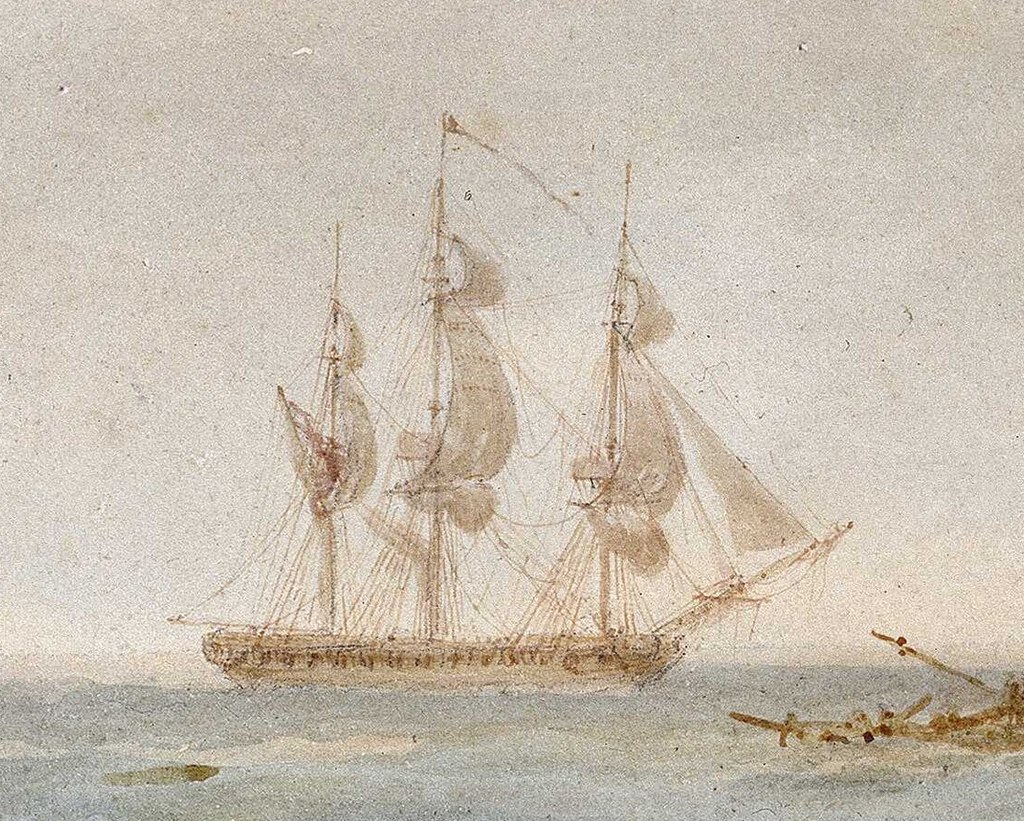 HMS Penelope in her days of glory

Built in 1798, HMS Penelope was a 36-gun frigate and her day of glory was to come on 30st March 1800when, under the command of Captain Henry Blackwood (1770-1832) she engaged the French 80-gun ship-of-the-line Guillaume Tell off Malta. Despite the disparity in size and firepower, Penelope’s excellent gunnery and Blackwood’s superb ship-handling resulted in taking down the Tell’s main and mizzen topmasts and her main yard, slowing her down sufficiently for a squadron of heavier British ships to catch up and force surrender. Penelope saw extensive service thereafter but by 1815 she had been reduced to service as a troopship. 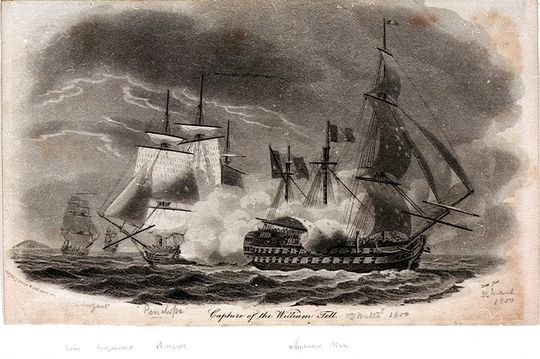 Now under Commander James Galloway, HMS Penelope sailed from Spithead for Canada in late March, 1815 with a total of 284 crew and passengers. At the Newfoundland Banks she encountered ice, fog, and strong south-east winds and Galloway considered it unsafe to press on for land until the weather cleared up. When it did, Penelope arrived off the island of Miquelon, off the south-eastern tip of Newfoundland, on 24th April. Here she encountered another very heavy gale, this time from the north-west. On the following day she met ice and was frozen-in for nearly twelve hours.  The ice released her the following day and she sailed on into the Gulf of St. Lawrence, and safely passing north of Cape Breton Island and the islands of Brion and Madeleine. The cold was so intense that furled sails were frozen solid. By 29th April Penelope as pushing on through thin ice sheets and in late afternoon she sighted land close to Cape Rozier, on the southern side of the Gulf.

Given the adverse conditions, it was unfortunate that Captain Galloway was in poor health, stating later that he had, “for a long time, been almost deprived of my eyesight by night, and also afflicted with rheumatic pains and other complaints,” and that as a consequence “I was unable to judge correctly of the extent of our danger.”

On the 30th, the weather was more moderate, though cloudy. At eight in the evening, in darkness and with soundings indicating seventy-one fathoms beneath the keel, Galloway ordered the master to go around the ship and caution the men forward to keep a good look out and on no account leave the deck. Galloway then retired to his cabin and was discussing the course and likely location with the first lieutenant when the ship struck ground and held. Land was spotted at about a cable’s length – two hundred yards – from the vessel.

One boat was then hoisted out to take soundings and found two and a half fathoms forward, and three and a half aft – the ship was clearly stuck on a single rock. All the boats were immediately lowered and, despite a considerable current flowing, managed to drop an anchor into five and a-half fathoms to warp the ship off. Initial efforts to do so failed and guns and other heavy items were cast overboard to lighten the vessel. She still held fast. During this time the weather was deteriorating, increasing to a gale, and the rising sea beat the Penelope down on the rock beneath her through the night.

Daylight found the ship still being pounded on the rock and incapable of getting off. The gale was now carrying sleet and snow with it. Instances of insubordination were appearing, some men going below and taking to their hammocks, remaining there despite the urgings of the officers. It was now clear that the ship was going to break up and that she must be abandoned. Orders were therefore given to get provisions into the boats. This was too late – water had risen to engulf the lower deck. All that was saved were thirty bags of biscuits but they were ruined by soaking in salt water. The masts were now cut away and they fell landwards. The master was sent in the cutter to try to fasten a rope to the shore, but the craft was smashed in the surf, though the occupants did make it to the beach. A second boat was now sent for the same purpose. This also was lost in the surf but two army officers did manage to swim ashore with important despatches tied around their necks. A third boat met a similar fate.

Waves were by now sweeping across the Penelope’s deck. Galloway, too weak to stand, was lowered into the pinnace – the largest of the ship’s boats, which was already packed with men. This too carried a rope so as to try a last attempt to establish communication between ship and ashore. The pinnace was however immediately overturned. Many of the occupants got ashore, Galloway himself supported by two men. The tiny gig was now the only boat remaining intact. She was lowered from the stern and the first and second lieutenants, with eighteen men, jumped into her. They were all fortunate enough to reach the shore, and some of the men gallantly returned to the vessel, and succeeded in landing about twenty others. The gig returned yet again and took off some more of the crew, but this time she was unfortunately upset in the surf, though no lives were lost.

The men left on the wrecked Penelope now saw that hope was of evacuation was lost. Discipline broke down completely. Spirit stores having been broken into and many of the men were too drunk and incapable to attempt to get to shore on the floating spars and planks surrounding the vessel. A Victorian chronicler of this disaster was spurred to moralise on this: “By drunkenness the bed of the ocean has been rendered a foul and gloomy charnel house, where the bones of thousands of our fellow-men await the summons of the Archangel’s trumpets, when ‘the sea shall give up her dead.’ The reckless seamen, though unprepared for another world, hurry themselves into the presence of their Judge, to meet the drunkard’s doom.”

Those who had gained the shore were also in a desperate state.  They were bruised and benumbed by the cold, their clothes were freezing to them, and they were without provisions of any kind. A search yielded some wood and fires were started but before any benefit was had of them to dry clothes or warm bodies several survivors were already so front-bitten that several would later lose toes. A tent was constructed with branches and blankets. Flotsam from the wreck was gathered up – this included sixty pieces of pork. With water from melted snow, food of a sort was thus available. Unfortunately however, several casks of wine were also washed ashore and a group of mutinous men took possession, broke them open and drank themselves insensible.

All this time the men left on the wreck were impossible to reach or assist from shore, despite their heart-rending appeals. The storm did not abate and the cries could be heard on into the darkness of evening. Finally, around midnight, three loud crashes were heard as HMS Penelope finally broke up, taking the men still on board with her. An unfortunate consequence was that yet more alcohol was washed ashore and “there ensued such a scene of tumult and insubordination as, happily for the honour of the service, seldom occurs in the British navy. The men broke open the casks, and before the officers were aware of it, scarcely a man was to be seen sober. This brought with it its own punishment; many had drank to such a degree that they fell lifeless in the snow.” The breakdown in disciple was now almost total and the next day, forty-eight men deserted, after plundering several of their shipmates, and breaking open every trunk that was washed up. Many of these men were later found dead in the woods by Canadian settlers. 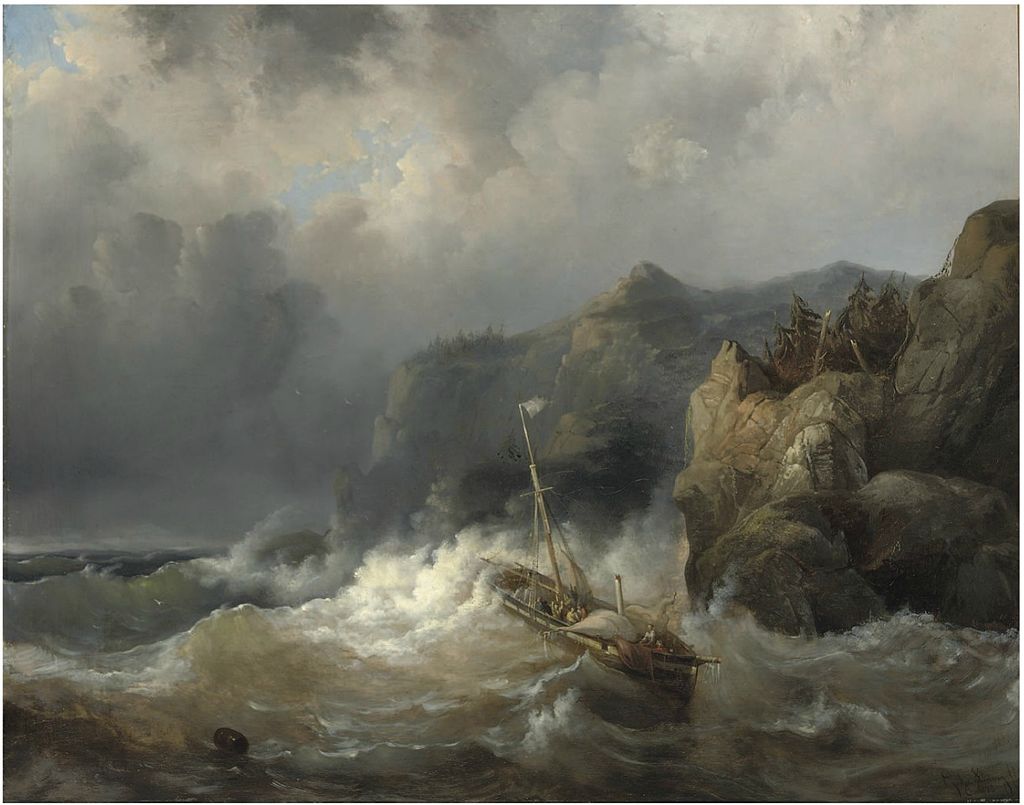 The officers and remaining survivors now set to repairing the boats that had been washed ashore and to fashioning sails from remnants.   A cask of flour was also found, part of which was made into dough. Two days later a local Canadian boat appeared and its cooking utensils allowed preparation of warm food.  The weather remained bad and it was another three days before it moderated. By this stage the salvaged boats were capable of setting out for a safe haven with sixty-eight men and two women on board. The night was spent at a small settlement where the local inhabitants fed the survivors with potatoes.  Gaspé Bay was reached the following day and shelter was found at the small settlement of Douglastown on its southern shore.

The final death-toll was estimated at 216. Captain Galloway himself was report: “I feel it my duty to state to you the infamous conduct of the whole of the crew, with a very few exceptions. From the time that the ship struck, their behaviour was not in the character of British seamen in general; they had neither principle nor humanity; some, in consequence, have suffered severely, and several died from drunkenness.’

The court-martial that followed resulted in both Galloway and his First Lieutenant being reprimanded for the breakdown of discipline on board and for going on shore while men were left behind on the ship. Neither man was employed by the Navy again. On the grounds of negligence, the master was relegated to the bottom of the seniority list. One seaman received 500 lashes for insubordination, desertion, and drunkenness and a further forty-eight men avoided his fate by deserting.

The most notable fact about this tragedy is not that it happened but indeed that any such breakdown of disciple was so rare, regardless of circumstances. And the wonder is that any survived it at all.

“Antoine Vanner is the Tom Clancy of historic naval fiction“