Skip to content
Mrs. Reston, the Heroine of Matagorda, 1810

In historical fiction (including my own) women tend to turn up in the most extraordinary situations and bear heavy responsibilities, to an extent which may seem fanciful to many today, given the idea many have of women’s role being so subservient during much of the past. One example is “The Heroine of Matagorda”, a Mrs. Agnes Reston, wife of a sergeant of the Scots Brigade which was responsible for the defence of a small fort of Matagorda, on the approaches to Cadiz, in 1810. The city was under siege by French forces and the Matagorda outwork was a critical point in the defences. Mrs. Reston was one of the few women (mainly wives of NCOs) who were allowed to follow their husbands, often acting as laundresses, and she refused to leave the fort when the other wives were sent away for safety.

According to Joseph Donaldson, a sergeant of the 94th who later published his memoirs, Mrs. Reston tore up her linen for bandages and tended the wounded.  She carried sandbags for repair of the batteries, and brought ammunition and water to the men at the guns. When she saw how frightened a drummer-boy was, who had been sent to get water for the wounded from a well that was under French fire, she exclaimed “The puir bairn is frightened, and no wonder! Gie the bucket to me!” 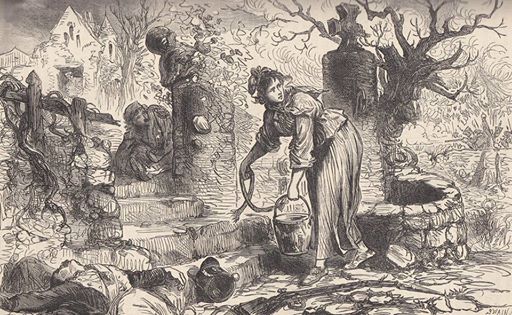 The Victorian-era illustration shows a possibly idealised picture of Mrs. Reston at the well but nothing indeed can convey the depth of her heroism.

Mrs. Reston proceeded to the well and drew water calmly, though no less an authority than General Napier, historian of the Peninsular War, stated that a shot cut through the bucket rope but she recovered it and continued on regardless. She had a child with her in camp and Donaldson recorded that “I think I see her yet, while the shot and shell were flying thick around her, bending her body to shield her child from danger by the exposure of her own person.”

This splendid lady went on to die in Glasgow in 1856 at the age of 85. After her husband’s discharge some officers who admired her heroism proposed her for a pension.  The Commander-in-Chief supported her case to the Secretary of War, but it is shaming to record that he judged that he had no funds at his disposal for such a purpose. Lack of gratitude to those who put their lives on the line for their country is not a modern phenomenon.

Mrs. Reston’s courage was however remembered in a long poem by the Scottish poet William McGonnagal (1825 – 1902) in his poem “A Humble Heroine”.  The most memorable lines are typical of  McGonagall at the height of his not-inconsiderable lyric power and mastery of rhyme: 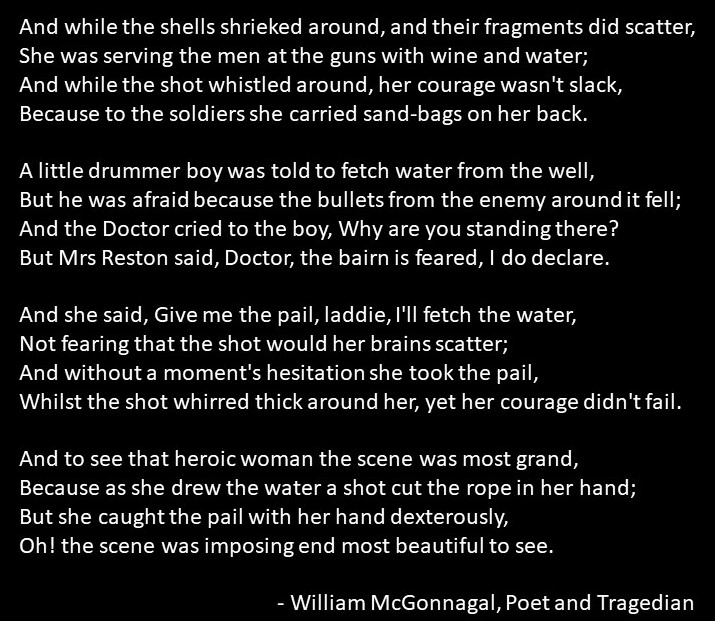 Not all the women of Mrs. Reston’s time were dancing and flirting with Mr. Darcy and other stay-at-home fops like him. She should not be forgotten.

And to read about the adventures of another heroine …

… albeit a fictional one – you may be interested in Britannia’s Amazon, which deals with the adventures of Florence Dawlish while her naval-officer husband is overseas in the service of Queen and Country.  Click on the image below to read the opening chapters. (You can read the whole book for no extra charge if you’re a Kindle Unlimited (KU) subscriber) 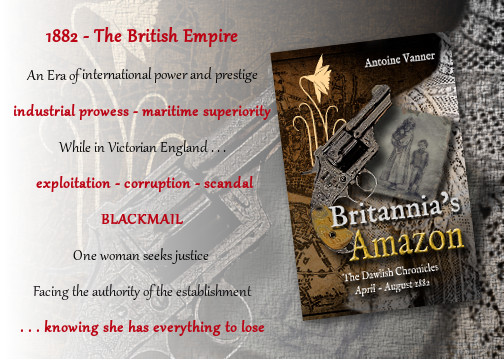 If you’re a Kindle Unlimited subscriber you can read any of the six Dawlish Chronicles novels without further charge. They are also available for purchase on Kindle or as stylish 9 X 6 paperbacks. Click on the banner below for more details: