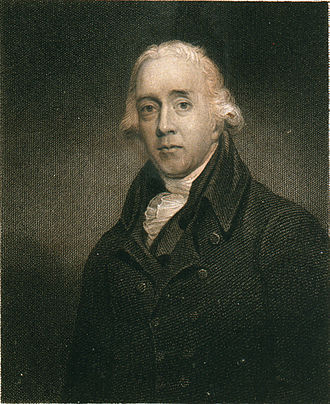 In earlier articles in this occasional series of blogs (click here for bloglist) we have met artists – such as Thomas Luny and Richard Paton – who had experience of life at sea before (or sometimes during) their careers as artists. One of the most renowned painters of the period, Nicholas Pocock (1740-1825), had an even greater qualification for he was qualified as a ship’s master and had served as such for many years. He was in addition present at the “Battle of the Glorious First of June” in 1794, which added even more realism to his paintings. In his lifetime he was probably the most admired of all naval artists, a fact that was confirmed by him being commissioned to produce six key pictures for Clarke and McArthur’s “Life of Lord Nelson”, the two-volume official biography which was produced shortly after Nelson’s death at Trafalgar in 1805 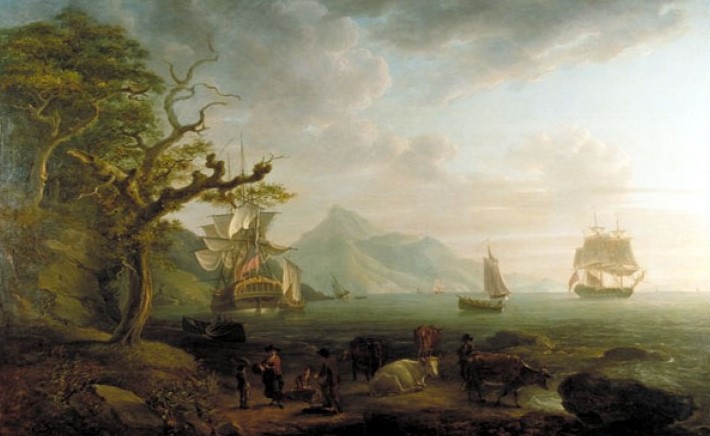 Nicholas Pocock was born in 1740 in Bristol, then Britain’s second-busiest port, one which was heavily involved in the West-Indian “triangular trade”. This involved carrying manufactured goods to West Africa, exchanged them there for slaves, transported them for sale to the West Indies and on the return voyage to Britain carried sugar and molasses. In due course Pocock was formally apprenticed to his father, so learning seamanship in the most practical school possible. In 1759 his father was to die however, leaving him to care for his widowed mother and two younger brothers.  In these endeavours he was sustained by the support of Richard Champion, a Quaker merchant and pioneer manufacturer of porcelain. Nicholas Pocock was to command ships on Champion’s behalf, including trading to the American colonies. Given the lead that Quakers took in campaigning against the Slave Trade, one surmises that Nicholas Pocock himself was not to have been involved in this shameful trade. 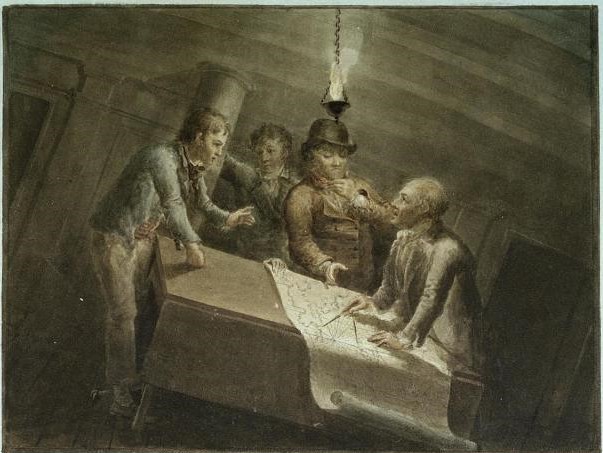 “The Consultation” – circa 1810.  A situation Nicholas Pocock would have
been familiar with as a master –  decisions need to be made during heavy weather

Now a ship’s master, Nicholas Pocock was in parallel showing significant promise as an artist. His first drawings date from the 1758-62 period and were mainly of Bristol privateers and slave ships. He carried this talent over into his logbooks so that were normally systematic and dispassionate recordings of events were in Pocock’s case transformed by addition of drawings. Five of these logs survive from the 1766 to 1775 period and four of them are in Britain’s National Maritime Museum in Greenwich.  One such log referred to voyages to the West Indies in a ship, the Lloyd probably owned by Champion, in 1771-72. In addition to the usual bald records of position and weather  most entries are supplemented by pen and wash drawings.  Other voyages took Nicholas Pocock to the Mediterranean, experiencing in these years every type of weather – giving insights that were later to stand him in good stead as an artist. 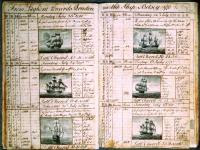 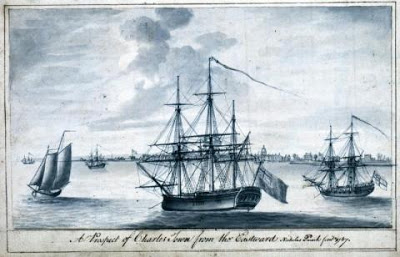 In this period Nicholas Pocock was also gaining competence as a painter in oils and watercolours. One wonders what the practicalities of this were. Did he perhaps take lessons between voyages, lessons that must necessarily have been of short duration? Was he largely self-taught? How much painting did he actually do at sea?  If he did, what measures were needed to facilitate it? 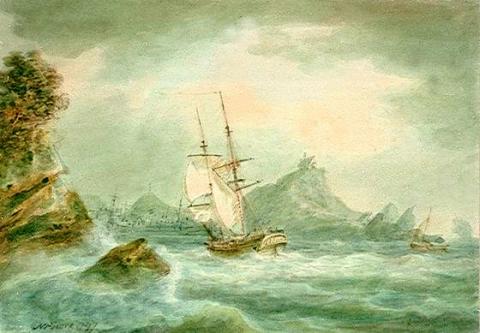 Events now pushed  Nicholas Pocock towards taking up painting as an alternative career to the sea.  The American Revolutionary War had a devastating effect on transatlantic trade and Pocock’s employer Champion, who as a porcelain manufacturer was involved in luxury exports, was to become insolvent in 1778. Pocock had by now become known to the greatest contemporary British artist, Sir Joshua Reynolds, who admired his work and encouraged him. By 1782 Pocock was sufficiently respected to have work exhibited by the Royal Academy.  This year was also to see Admiral Rodney’s victory over the French at the Battle of the Saintes and Nicholas Pocock – familiar with the area in the West Indies where it took place – was commissioned to produce a series of paintings commemorating it. This led in due course to the prestigious appointment of Marine Painter to King George III – an early example of an accredited war-artist. 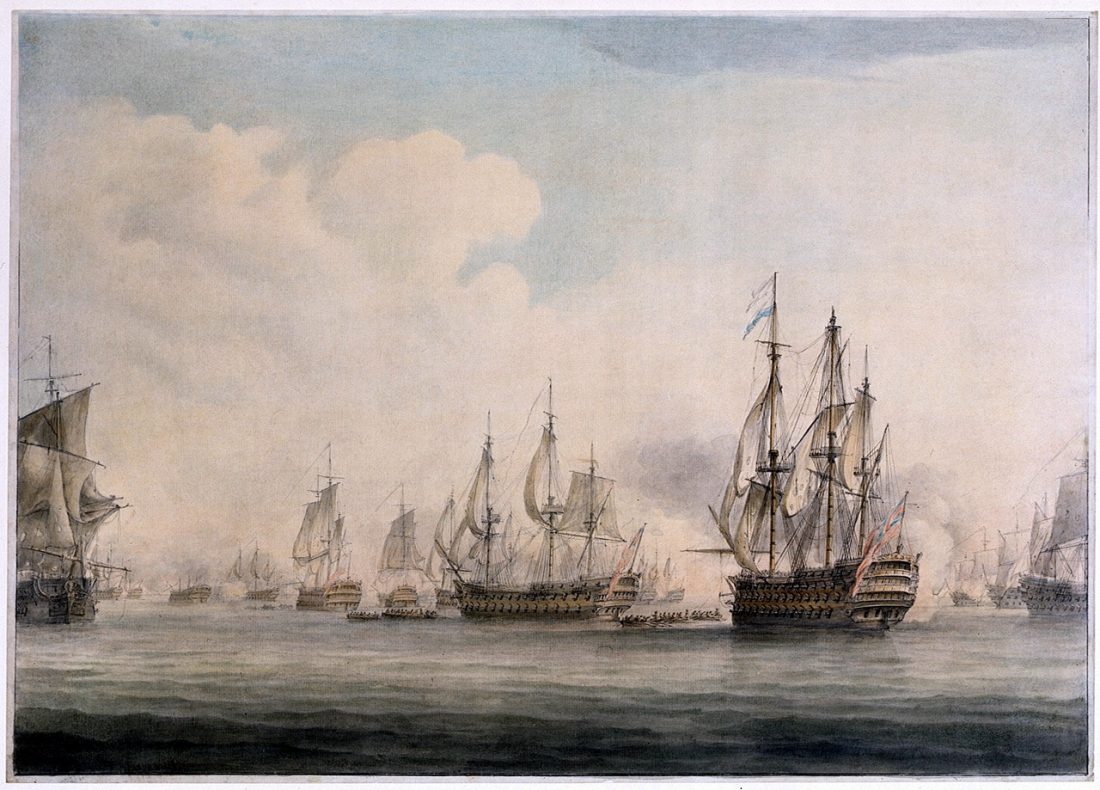 Pocock’s approach was meticulous and his naval paintings were based on very extensive research. His background as a master mariner aided his interviews with eyewitnesses and his determination of what were the wind and sea conditions, as well as ship manoeuvres, during the actions he was depicting. He drew detailed diagrams of battles to fix relative ship-positions and made preliminary sketches of individual ships. In due course he was to be present himself on the “Glorious First of June” battle in 1794, which he viewed from the frigate HMS Pegasus. The notes and sketched he kept during the action were to provide the basis for a series of paintings depicting its various phases. 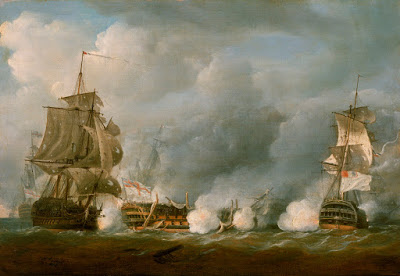 Nicholas Pocock’s naval paintings were also strict in their demands for accuracy. The website of the National Maritime Museum quotes a letter which  begins, “Sir Richard Strachan’s compliments to Mr Pocock and inform him he just recollects that the French Admirals mizzen (sic)  topmast should be shot away at the time the picture is meant to represent…” and it is accompanied by a scratchy pen and ink sketch by Sir Richard who commanded the squadron which captured four French ships in November 1805. 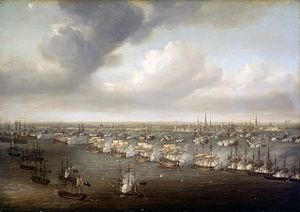 It is hard at this remove to appreciate the intensity of the veneration felt for Nelson after his death at Trafalgar in 1805. It was widely – and correctly – realised that this smashing victory had saved Britain from an existential threat and that it was to a very great extent due to the genius and leadership of one man. The official biography mentioned earlier was one mark of this esteem, and it was an acknowledgement of Nicholas Pocock’s eminence by this time that he be commissioned to illustrate it. The six key pictures were exhibited the paintings at the Royal Academy and engraved by James Fittler (1758 –1835) and reproduced in the biography, four of them accompanied by plans of the action. 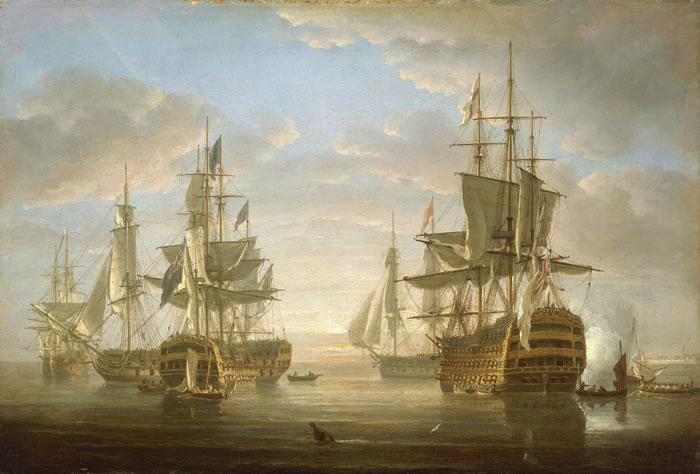 One of the paintings is considered by some as Nicholas Pocock’s best – this is “Nelson’s Flagships at Anchor”. This shows a scene that never actually occurred – five ships that had served Nelson in various periods shown together at Spithead in the golden light of evening. 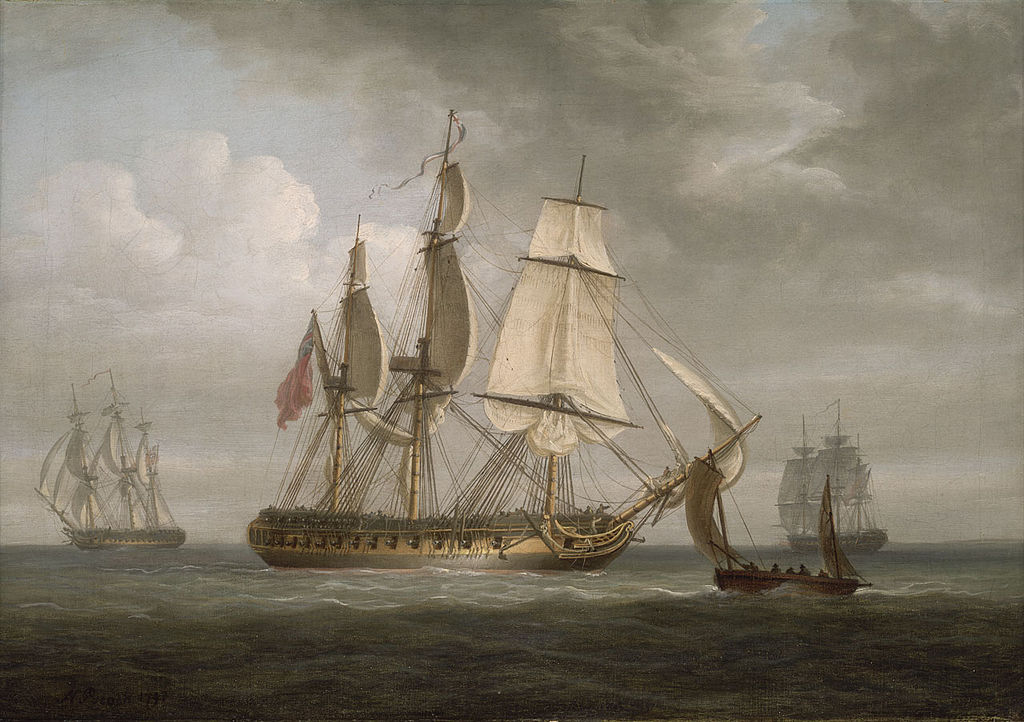 The Frigate HMS Triton © BHC3675The ship from which Pocock views the Glorious First of June,
HMS Pegasus, would have been broadly similar

Nicholas Pocock died in 1821 and was by then one of the most respected artists of his time, the authenticity of his work based on hard personal experience of the challenges of seamanship.  It was a remarkable career for a man who had commanded merchant ships at sea up until almost his fortieth birthday, and who learned his craft as a painter under the most difficult of conditions.

The seventh Dawlish Chronicle was published on November 30th in paperback and Kindle, and is available to subscribers to Kindle Unlimited and Prime at no extra charge

Registering for the Dawlish Chronicles mailing list by clicking  on the banner below, will keep you updated on new books and facilitates e-mail contact between Antoine Vanner and his readers. You’ll also get four free short stories to load on your Kindle or Tablet.

(And there’s a fifth free story coming soon as a Christmas gift!)